Howdy all you Grue-believers! I’m leaving for Nashville shortly after writing this, so I figured I’d try some southern hospitality on y’all! Speaking of “hospitality”, we all saw last week what the hospitality staff at the Rosarito Beach Hotel was like….let’s just say they were less than caring of guest’s needs. As all of you know, I have not been the biggest fan of the returning three episodes of season two of Fear the Walking Dead. You will get a chance to hear a discussion on that later this week on an HNR Extra where Doc and I share  our thoughts on the show’s progression and/or digression. Let’s see if “Pablo and Jessica” can breathe life back into my wavering enthusiasm. 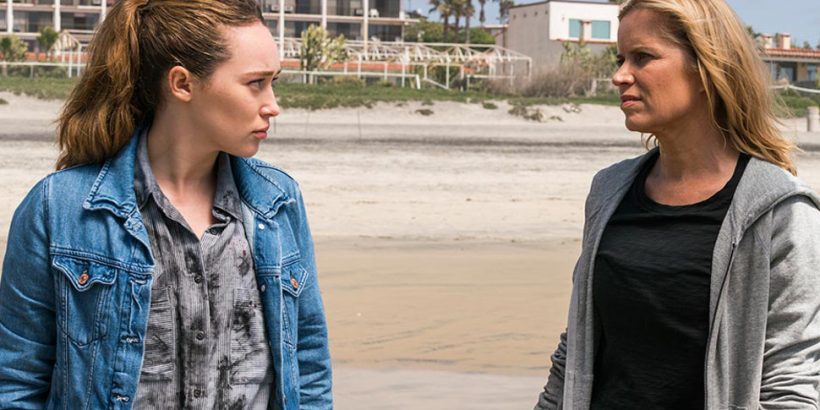 “Pablo and Jessica” started out weak in my opinion. It began with showing how Madison (Kim Dickens) and Strand (Colman Domingo) made their way out of the bar to save Alicia (Alycia Debnam Carey) and crew. The problem I have with this is the obvious. We already know they survived unscathed! Thankfully, only five minutes was spent on this rather than the entire episode. They found a small door behind the bar leading to another room, killed a walker, bloodied themselves up and made their way through the crowd. One new discovery was that they found the truck missing when they exited. Now we know what happened to Ofelia (Mercedes Mason). I’m going to assume she is heading back to the Abigail estate to see if her father Daniel (Reuben Blades) survived the fire.

Meanwhile, at Colonia, Nick is having a conversation with Alejandro (Paul Calderon) about the deal he made with the thugs to give them more Oxy for more supplies. Alejandro is not happy but Nick has an idea. He asks Alejandro if he has compounding tools. Yes, Nick is going to pit the wisdom gained in his kicked habit to good use.He states “you’re a pharmacist and I’m a junkie”. This intrigues Alejandro who gives up the tools and Nick gets to work making less concentrated Oxy from the current supply. Other discussions during this time together included Nick’s doubt that Alejandro was truly bitten and Luciana’s (Danay Garcia) way of testing people to earn her trust. 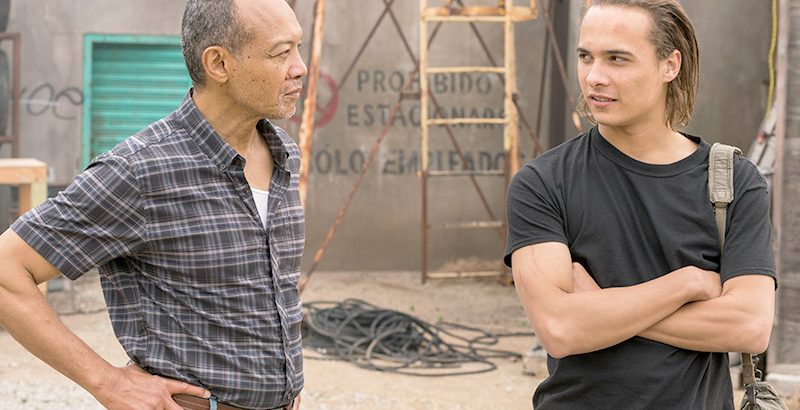 Back at the hotel, Madison and the gang meet up with the jilted wedding guests who currently hate Elena’s (Karen Bethzabe) face. Madison is convincing them as to Elena’s motive and how terrible she feels. After some conversing goes on they decide to unite and figure a way to rid the hotel of its unwelcomed guests and make this their fortress.

Nick makes his way outside and see’s Luciana playing soccer with some of the children of Colonia. After a goal is scored, a child complains that  the goal is unfair due to one team having an adult and his team does not. Nick being the smooth guy he is jumps in on the other team and weaves his way through the defenders, passes the ball for the assist to a goal. He scoops up the child and in his best Telemundo voice yells “goooooooooooooooooooooooooal!” The children cheer and Luciana’s expression softens further. That is until she sees a frantic citizen of Colonia tell Alejandro that he found Pablo in pieces, upsetting her greatly. Nick goes to her and says he will go with her to see. He quips about Pablo being her boyfriend; but, in the ultimate foot in mouth moment, she retorts that Pablo was her brother, causing a bit of red face and apologies. 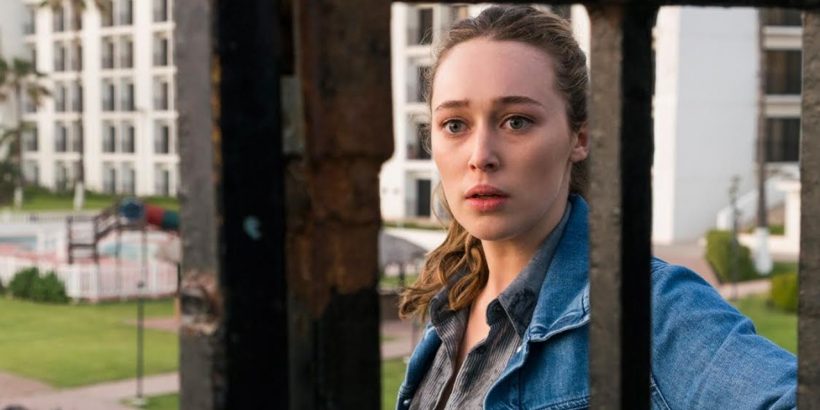 The team back at the hotel is working to empty all 17 floors of the hotel of the walker.  While figuring it would take weeks, Alicia comes up with an idea while walking into the ocean and spotting the riptide sign. They decide to work together and pull the old Pied Piper routine. The crew herds all the walkers from all floors to the pier where they follow Madison to the end. Madison jumps in and the walkers all fall in after her. The only difference is that Madison has Alicia and Hector (Ramses Jimenez) waiting for her with a boat. Infestation problem solved….for now.

Back at Colonia, Alejandro is very proud of Nick and gives him his own place to stay, saying he’s earned it. Nick is chilling, teaching himself to speak Spanish from a book when Luciana comes to visit. She is impressed with Nick and helps him with some pronunciations. She eventually falls asleep in the bed and awakes to Nick, the smooth gentleman, sitting on the floor still studying. She apologizes for falling asleep then heads to the door, kind words are exchanged then the moment I told you was going to happen does. They embrace in a kiss. We’ll see where this goes. I like Luciana’s character, so we will see if she is in it for the long haul or much in The Walking Dead fashion she will get killed off and send Nick into a drug induced spiraling rage. 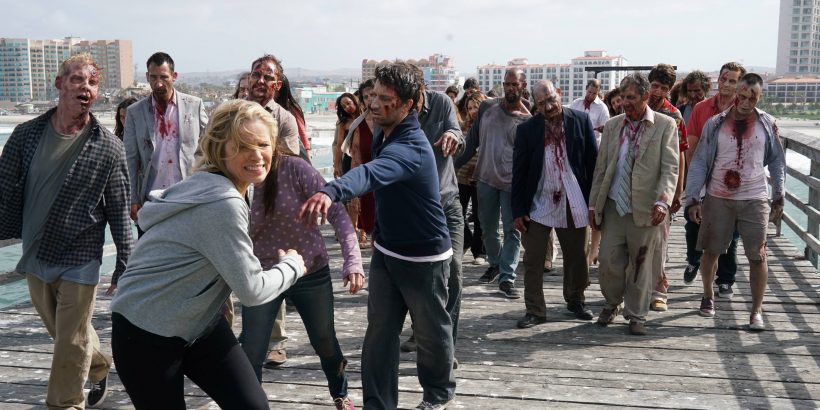 Back at the hotel, everyone is gathered for a celebratory dinner. That is everyone but Jessica’s (the zombified bride) husband. After being informed of the situation, Strand goes to his room and he is at the door. He has been keeping Jessica locked in a room because, after all, it is his wife. Strand and the groom have a heart to heart which is  actually an emotionally touching scene where Strand asks the groom to let him help Jessica. The groom gives in and let’s Strand “help” Jessica.

“Pablo and Jessica” was written by Kate Erickson and directed by Uta Briesewitz. I will say that this was the best episode of the second half of season two because there was no Travis and Chris baby/daddy drama, the story-line is actually taking shape establishing the hotel as a possible stronghold with some interesting characters and the further development of Nick’s character. If the rest of the season trends this way it will be a pleasant surprise.

Here it is Grue-believers! The moment we’ve all….well at least I’ve been waiting for…the season finale of Fear the Walking Dead. The only thing that would be better is if it were the series finale! After the strong note with the previous episode, Wrath, I was expecting quite a bit from the finale. Well, I […]

Wolf Creek (PopTV 2016): A 6 Episode Mini-Series That Should Not Be Missed

The TV mini-series of Wolf Creek which premieres on PopTV on October 14, 2016 is a tremendous success. Greg McLean, serving as producer and directing the final episode, translates the films into a riveting and thrilling six episodes. John Jarratt reprises his role as Mick Taylor, the serial killer roaming the outback. Lucy Fry stars […]