Director Jonathan Straiton, along with co-writers Ron Bonk and Mean Gene, may have created the most distasteful, objectionable and vulgar horror film of the past decade. And, it is absolutely magnificent. The film is Night of Something Strange and it should not be missed. It will offend everyone in some shape or form. Count on it. But, Straiton has also infused the film with an enthusiastic sense of humor and contagious atmosphere of fun. The cast appear to having the time of their lives. Their passionate fervor bleeds off the screen filling the theater with laughter and horror. The crew certainly has the same fun providing the film with effect after effect, gallons of blood and warped, sick surprises. The film never lets up, never fails to push buttons and takes things just a few steps further than imaginable. 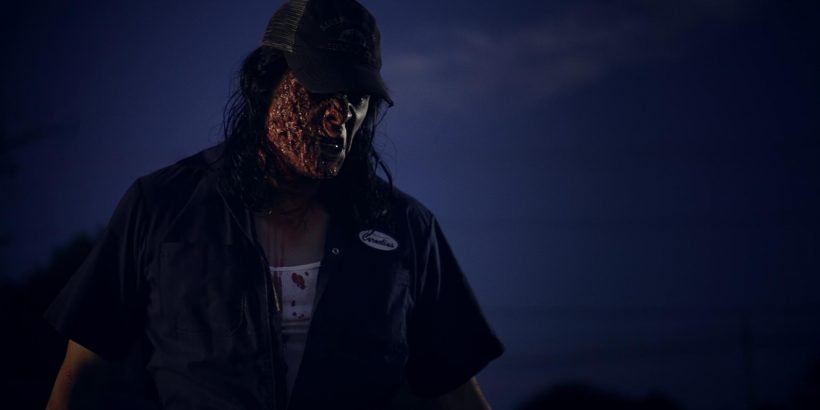 How to describe the story behind Night of Something Strange? This thing is bat shit nuts. It pushes just about every envelope imaginable, especially if that envelope involves bodily fluids. The film begins with a janitor at a morgue who has a desire for the cold, cold love. Yes, he is a necrophiliac. But, he gets a little something extra when the corpse is full of radiation-exposed STD-filled in-explainable horror. Next thing you know, the dude is a rabid zombie that is out to eat everything besides brains. While the disease spreads, two groups of teenagers are heading to spring break but are stopped along the way as they cross paths with the repugnant horror looking to ravage their lives — body and soul. By the end of the film, the kids have experienced the grossest coming-of-age tale ever, one that would give Stephen King nightmares. Oh, and, yup, tentacles. Oh, my! 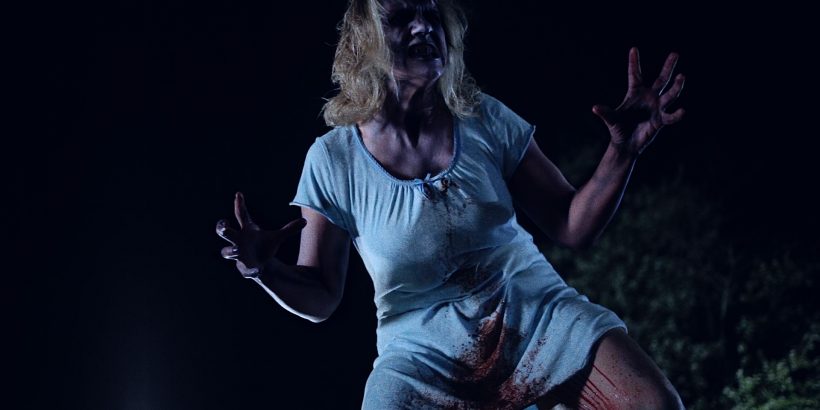 The depth of depravity of the content found in the run-time of Night of Something Strange is astounding. But, the sense of humor, the tongue-in-cheek tone and the talent behind and in front of the camera somehow make the content easily digestible and undeniably entertaining. The film is a absolute riot! It is offensive. It is demented. Disgusting. Depraved. Everything hard-core horror fans desire. It is the best crowd-pleasing film for the late night crowd ever. It dominates its own space like a perverted cross between Evil Dead and Blood Feast. The special effects throughout the film sell every gory set piece. There is so much blood and gore it is exhausting. It never lets up, spraying crimson spew up until the very last frame. 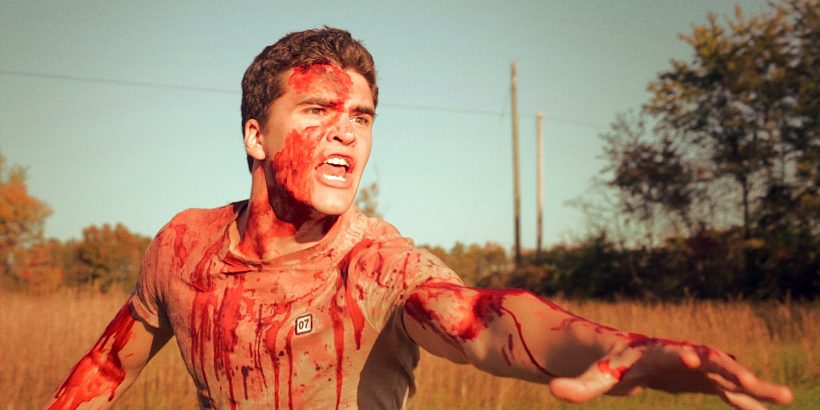 Trey Harrison and Rebecca C. Kasek lead the cast of Night of Something Strange. Harrison plays Dirk, a dick of a jock out to score and little else. Kasek plays the “innocent” Christine longing for the bad boy questioning her role among her high school pals. To film’s credit, the story focuses on these two and, in the middle of all the manic madness, allows them the opportunity to challenge their type-casting. Dirk and Christine make a fantastic pairing to follow and champion. Jonathan Straiton lovingly spotlights their story as they continually encounter horror after horror discovering the rules of the creatures attacking them. He turns Dirk into a hero, providing him with hilariously overwrought one-liners parodying and honoring 80’s catch-phrase nonsense. Christine is Straiton’s final girl. The director tortures and terrorizes her with an onslaught of grisly gore and blood. Kasek admirably faces everything thrown at her. 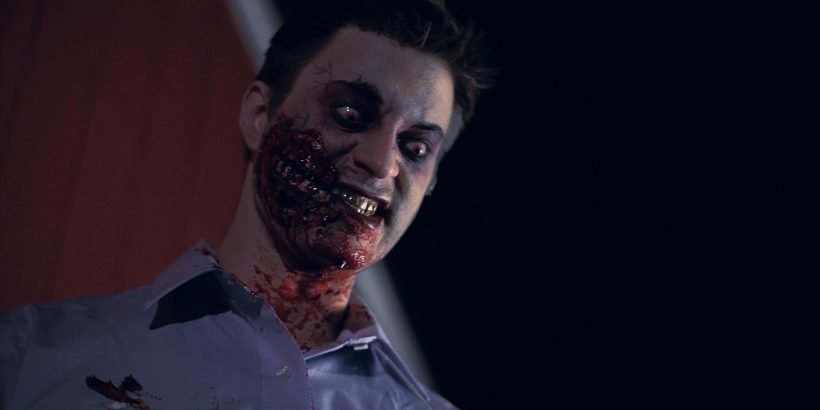 The rest of the cast is equally up for the task of facing the debauchery heading their way. Michael Merchant, as Freddy, arguably lands in the most awkward position in the film, a priceless, side-splitting error in judgment as his suffers a case of mistaken identity in the dark. Even Bruce Campbell hasn’t had to suffer this level of indignity. Merchant is fearless…and hilarious. John-Nicholas Walsh is Merchant’s partner in crime, the Costello to his Abbott. They are both fantastic in their roles and admirably brave. Toni Ann Gambale makes a great first impression as Carrie who suffers the first encounter to the horrors that await the group. Her scene in the gas station bathroom alone would be more than most could handle, but that is just the beginning for her. Nicola Fiore and Tarrence Taylor round out the cast of teens, both of which are perfect for their roles. No one is spared. Wayne W. Johnson is Cornelius who spends most of the film performing horrendous acts of malfeasance as he turns Janet Mason (and, together, a slew of others) into a horny creature spreading the STD zombie infection. He dives into every despicable display with wicked abandon. Kera O’Bryon and Al Lawler nearly steal the film in supporting roles. O’Bryon gets the single best line of dialog as she berates the teens visiting her convenience store. Lawler has the best observations ever and the most bizarre unexpected twist. As much as the gore sells the film, the ensemble cast is responsible for the entertainment found within the film. 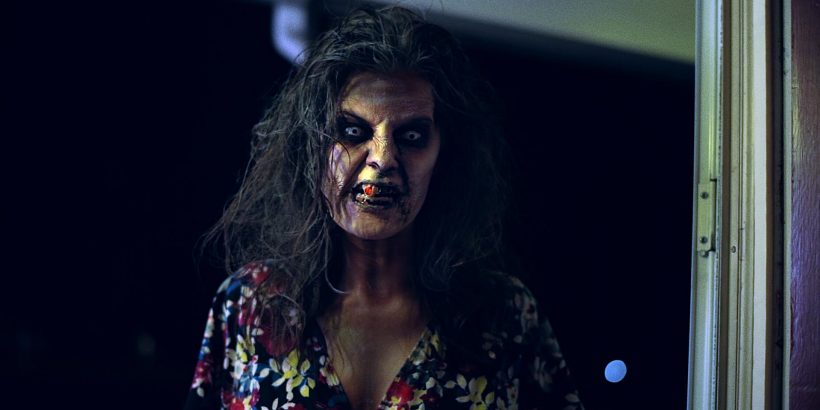 Night of Something Strange is outrageous, ambitious, offensive and fun as hell. It is the perfect Midnight Feature at any horror film festival. The film jumps into the muck feet first from the first frame and never stops pushing the boundaries of good taste. It also never looses sight of having a good time. The results are as infectious to the audience as the gooey disgusting perversions are on the cast and story. While much of the humor may be heavy handed in its sophomoric splendor lacking a sophisticated touch to its tone and timing, the film never pretends to be more than it is. And this approach is glorious. It revels in its depravity creating a series of “OMG, I can’t believe I just saw that!” gasps of goofy horror and silly shocks followed by laughter, sometimes nervous, at other times gut busting. Director Jonathan Straiton embraces his story with little to no restraint but somehow keeping things just this side of repulsion. The brave cast also swim through the gruesome goop and slime invested to the hilt. Each actor faces their own challenges that range from bathing in blood splatter to terrifying tentacles to … well, that would be telling. For those who are not entirely turned off by offensive gore and humor, Night of Something Strange is made for you. The film deserves to be discovered and to become a cult classic. Catch it if you can, catch if you dare.

Night of Something Strange 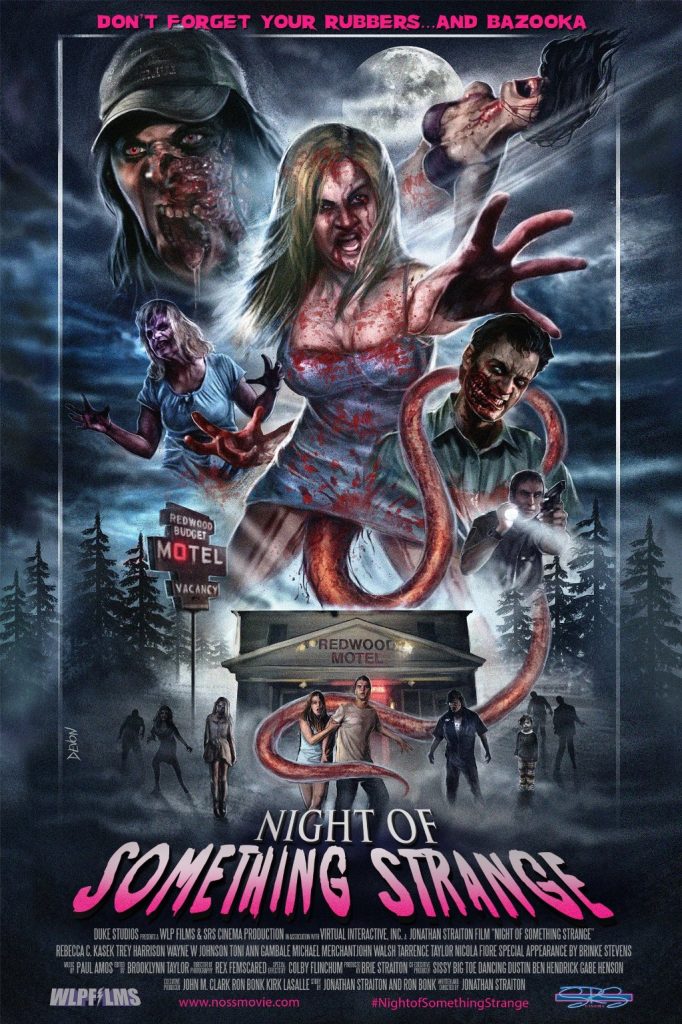 Seemingly equal parts villain and vigilante, the titular killer known as The Laughing Mask terrorizes a criminal gang while also haunting the waking hours of a man whose wife he had killed and whose young daughter remains missing. Writer/director/executive producer/co-editor Michael Aguiar has crafted an interesting tale with a fair bit of atmosphere on a […]

Beyond Fest Returns with a Full Slate of Films

BEYOND FEST ANNOUNCES ITS FULL SLATE FOR THE RETURN OF LA’S BIGGEST GENRE FILM FESTIVAL Beyond Fest announces its line up with 39 features including West Coast premieres of PARASITE, JOJO RABBIT, DOLEMITE IS MY NAME, COLOR OUT OF SPACE, THE LODGE, the world premiere of MISTER AMERICA, and reunion anniversary screenings of NATURAL BORN […]

“What the heck did I just watch?” Sometimes one finds oneself asking that after viewing a film – and that is not necessarily a bad thing. When a filmmaker is shooting for the surreal, this is often the desired response. Such is the case with Bloodsucker’s Handbook (GenreBlast 2016), which showed at the inaugural GenreBlast […]