Not every day calls for a gourmet meal. Sometimes, all you really want, and all you really need, is something like a trashy microwave burrito. Granted, you should not live off of microwave burritos, but there are times when they just hit the spot. Such is also the case with films; a steady diet of fine cinema can get a bit boring and binding. There are times when you just have a hankering for something good and trashy, and Microwave Massacre (1983) fits that bill. It is the tale of a sad sack construction worker who, after killing his wife in a dispute over food, discovers he has a taste for microwaved meals – microwaved meals made with people, to be precise. The only problem is that he enjoys the procuring of the meat so much, his freezer is filling up faster than he can eat it. Playing off the low-key insult schtick of star Jackie Vernon, the film is a broad send up gore films and T+A pictures of the late 1970s. The gore effects are low budget by necessity, but they enhance the goofy nature of the film. T+A style sleaze is prevalent from the first frame, but, as with the gore, it is silly enough that it is in service to the overall feel of the film. Microwave Massacre is a big ol’ microwave burrito of cinema – not realy good by any objective standard, but it sure is tasty to eat when you are in the mood for something trashy. 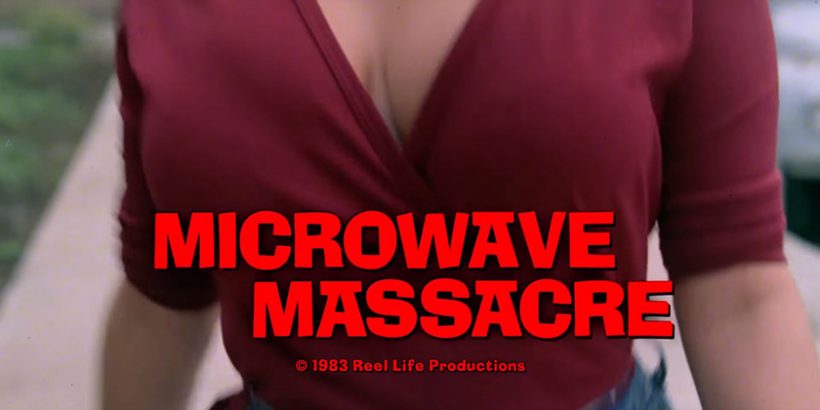 Donald (Las Vegas stand-up comic and television’s Frosty the Snowman Jackie Vernon) just wants something simple like a bologna sandwich for lunch. Unfortunately for him, his wife May (Claire Ginsberg) has discovered the joys of “gourmet” cooking. Using her brand new industrial sized Major Electric brand microwave oven, she only fixes him what she considers fancy meals. Tired of trying eat food he can neither identify nor stomach, Donald drowns his sorrows at the local bar. One night upon return from the bar to be greeted by yet another inedible “gourmet” meal, Donald murders May in a drunken rage. The next morning, to cover up his crime, he dismembers her and stores her body parts wrapped in aluminum foil in his freezer. Late at night, he mistakes her hand for a foil wrapped roast. Upon realizing his error, he discovers that he really likes the taste of human flesh. He finds that not only does it make him feel more energetic, it makes him more invigorated in a sexual way. Donald begins picking up hitchhikers and prostitutes to satiate both of his appetites. Soon he finds that, even though he shares his food with his unsuspecting co-workers, he is filling his freezer faster than he can empty it. On top of this, he seems to keep misplacing his wife’s severed head. 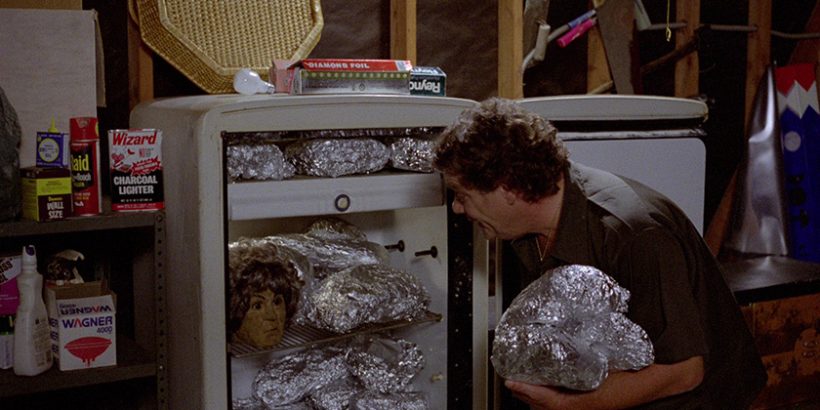 There is no mistaking that Microwave Massacre is anything but a goofy, broad send up of gory low-budget horror and T+A exploitation films. While the comedy is indeed broad, it never gets quite to the level of outright insanity of Airplane or of Troma’s output. Instead, it has an almost older Borscht Belt style feel to it. This is in no small part to the fact that the lead is Jackie Vernon, a regular on the Borscht Belt and Las Vegas circuit. Much of the humor of the film comes from Jackie Vernon’s sad sack persona and low-key snarky comments and put downs. Yes, it is essentially Vernon’s regular schtick, but it works really well in the context of the film. In spite of the understated barbs he slings, he still radiates a strange sweetness that keeps the audience sympathetic with his character, even as he kills and eats hitchhikers. Also, there is admittedly a bit of fun watching the voice of television’s Frosty the Snowman do and say horrible, horrible things. Complimenting Vernon’s performance are Al Troupe and Loren Schein as Donald’s coworkers Philip and Roosevelt. They make a goofy team that have some fun exchanges on the construction site. Subtle, they are not, but they appear to be having fun with their performances, and that makes them enjoyable to watch. The silliness even spills into the credits, with performers and crew listed under sections with titles such as “La Menu (In order of consumption)” and “Le Weirdo”. Even the microwave gets its own credit (and IMDB entry) – “And Introducing Major Electronic as The Oven”. 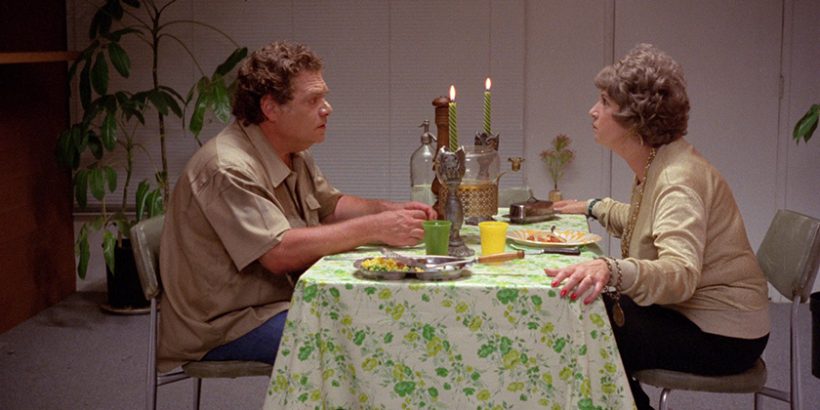 One would expect a film titled Microwave Massacre to have a fair bit of gore, and it does. Granted, the gore itself is exceedingly cheap and cheesey. It has more in common with Herschell Gordon Lewis’ mannequin-and-red-paint fueled masterpieces of the early 1960s than the technically advanced late-1970s/early-1980s gorefests from Tom Savini. This is not a problem, though. The low-budget-by-necessity look of the film is both authentic (considering the miniscule budget) and perfect for the tone of the film. Goofy, cheap, fake-looking gore and special effects are exactly what is needed. The body parts, when not completely wrapped in aluminum foil, are clearly the same blood splashed mannequin parts used throughout the film. May’s severed head, which is featured in a few key scenes, has a goofy, stuffed look to it that in no way bears any resemblance to anything ever attached to a real human being. The gore here is played strictly for laughs, and it works exceedingly well at that. 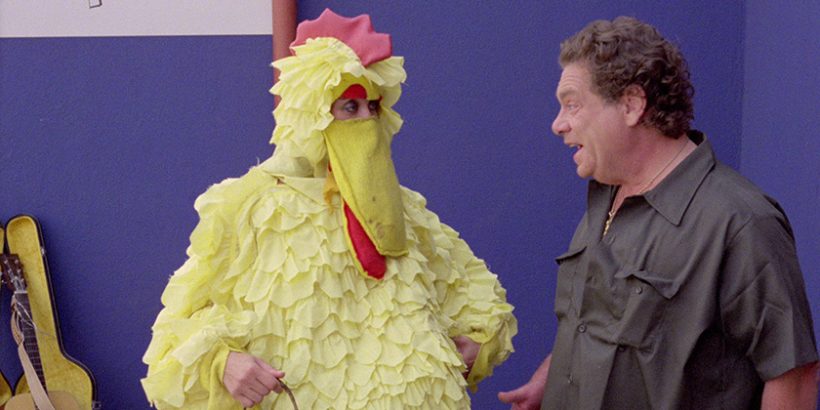 Microwave Massacre is not a subtle film when it comes to its comedy and gore, and it is not a subtle film when it comes to exploitation, either. Right from the start, this film lets its audience know what to expect. The opening credits are superimposed on the chest of a woman strutting down the street in a low cut shirt. The filmmakers do switch it up a little, though, swinging the camera around to focus on her rear end in tight pants for part of the credits. The opening gag involves a woman’s breasts being thrust through a just-the-right-shape hole in the construction yard fence. Though it was filmed in 1978, it took five years to get released. To help secure distribution, the filmmakers went back and added additional T+A scenes. At least they were creative about it. One such scene involves a fantasy sequence where a nude woman is lying across a giant slice of bread and someone is using an oversized butter knife to spread large amounts of mayonnaise (Miracle Whip?) across her body before finishing off the sandwich with another slice of bread. Again, we are not talking subtly here, but it is fun in a trashy way. 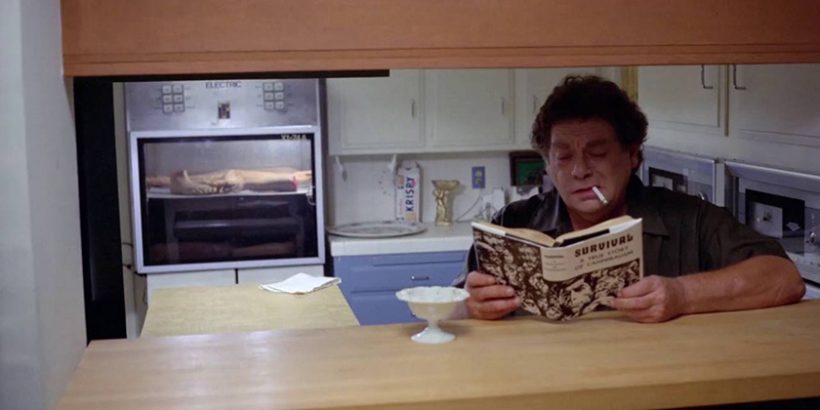 A diet solely consisting of microwave burritos will kill you rather quickly, but they sure are fun to eat every once in awhile. Would I want every film to be as trashy and cheesy as Microwave Massacre? Certainly not, but I sure am glad that a few of them exist to indulge in on occasion. Jackie Vernon’s well-practiced, low key, schlubby schtick is a perfect match for the Borscht Belt goofiness of the script. The filmmaker’s willingness to “embrace the stupid” of the film and enjoy themselves carries over to the audience. Silly, cheap gore effects and over-the-top T+A add to the overall goofy feel. When you are in the mood for a trashy but tasty trifle, there are far worse ways to spend 76 minutes. Like a microwave burrito, it is quick and cheesy and it will hit the spot if you are in mood for it.

(4 / 5) (when compared to other microwave burritos) 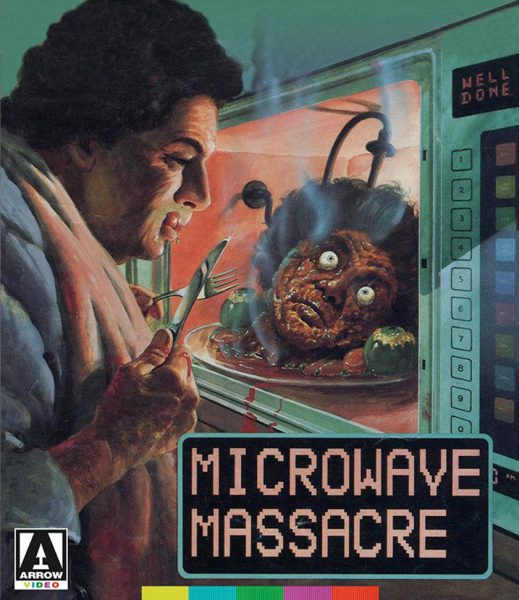 Meet the Vaubarns, husband Peter (Max Cavenham) and expectant wife Louise (Emma Kelly), a British suburban couple at the center of the U.K. horror short Burn. They quibble over watching […]

“Hellraiser” (1987): A Modern Horror Classic That Still Has the Power to Disturb and Terrify

Not all films that one remembers fondly hold up upon rewatching. Then again, some do. Celebrated horror author Clive Barker’s feature directorial debut, Hellraiser (1987), is just as inventive and […]