Full Disclosure: I’m a big Jessica Alba fan. Big enough to turn a blind eye to most of the films she appears in, which are generally not all that good to start with. So it’s safe to say that I was pretty excited at the news of a new horror film called The Veil, starring Ms. Alba, and directed by Phil Joanou, who has directed some very good films in the past, like U2: Rattle and Hum (1988) and State Of Grace (1990) among others. To make the deal even sweeter, it was written by Robert Ben Garant, who you might know from his time on the series RENO 911 (2003-09). He’s also responsible for scripting quite a few feature films over the years, like the underrated Balls Of Fury (2007), Night At The Museum (2006), Hell Baby (2013) and Jessabelle (2014). Unfortunately, the film was produced by Jason Blum, under his Blumhouse Tilt banner, and I’m not exactly what you’d call a fan of most of Mr. Blum’s films. 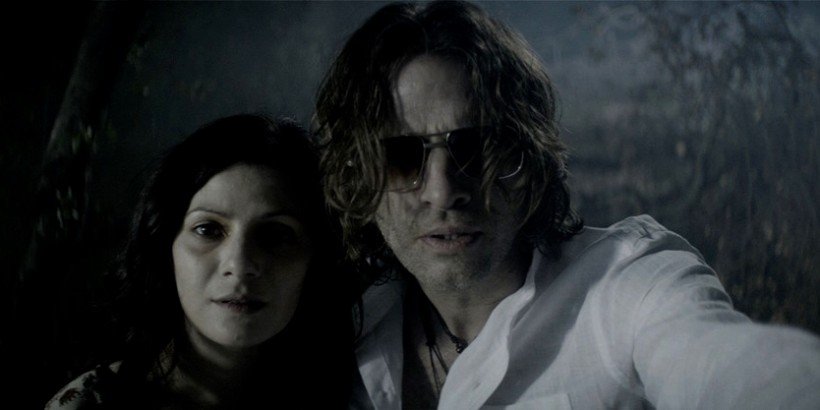 But I’m nothing if not open minded, and since The Veil premiered on Netflix it wasn’t too big of a deal for me to find 90 minutes to watch my future wife do her best to put a good old fashioned scare in me. Sadly, after it was all said and done, I was rethinking my imaginary union to the lovely Ms. Alba. 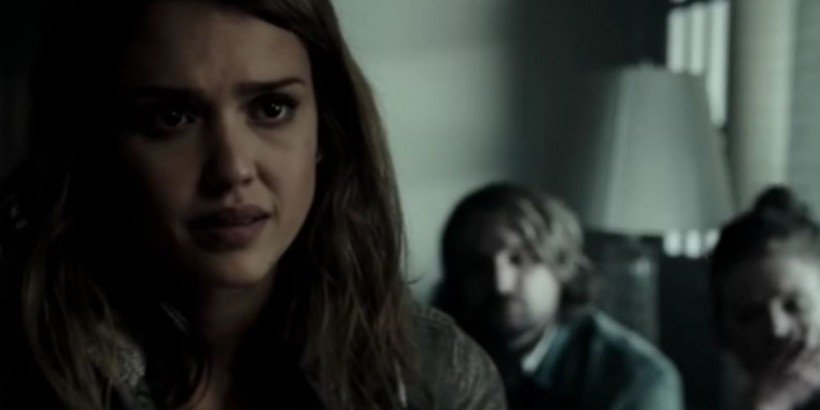 In 1985, 47 members of a religious cult known as Heaven’s Veil committed mass suicide by poisoning themselves. They were led to this act by their charismatic leader, Jim Jacobs (Thomas Jane), who also killed himself. But there was one survivor, a 5 year old named Sarah Hope. Now 30 years later, Sarah (Lily Rabe) agrees to join a investigative team led by Maggie Price (Jessica Alba) and go back to the long abandoned compound. Maggie also has her reasons for going back to the scene of the massacre, her father was the lead FBI officer in the raid on the compound, and was a first hand witness to the horror wrought by Jacobs. He was so disturbed by what he witnessed that he never really recovered from seeing it, and committed suicide 3 years later, his body was found by young Maggie. In the years after her horrifying discovery, Maggie sought out and found her father’s personal files and discovered some photos never released to the public. She noticed that there are some movie cameras in these photos, yet there was never any film footage recovered from the raid. Maggie has assembled a group of filmmakers (and Sarah), to go back to the compound and film a documentary and find out if there are any undiscovered reels of film there. And shortly after they arrive, they do indeed find those missing reels of film that feature Jacobs proselytizing to his small, but ardent flock. He’s also trumpeting a drug which causes brain death, and the antidote for it. And his claims that once one is brought back from the brink of death with the antidote, they return with newfound spiritual powers and abilities are proven when he does just that. Not too long after Maggie & company find the cache of film reels, they are slowly bumped off by the spirit of Jacobs, whose looking for new “vessels” for both himself and his followers. Jacobs intent is to continue his work in the present, and reap the souls of millions. 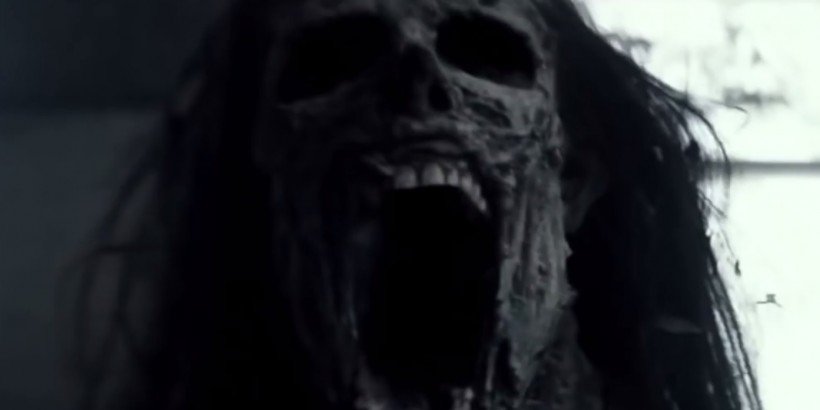 I gotta say, although the film is a slow slog for the first 30 minutes or so, it does get interesting in small increments as it continues. Part of this is because of Jane’s off the wall performance as Jacobs. He was given free range to put forth his inner Jim Morrison, and he runs wild with it! Although I was more than a bit disappointed in his appearance, which echoes the Rev. Jim Jones of the true life Jonestown tragedy of 1978 right down to the trademark dark sunglasses. Another reason why it begins to slowly work is because it didn’t take the easy route and become a found footage film. Although a fair share of The Veil is comprised of the characters watching the film they discovered at the compound, it could’ve devolved into a found footage film quite easily. Actually, it could’ve been a found footage film right from the beginning, it certainly features the necessary elements to go in that direction. But director Joanou realizes that the locale where the film takes place is full of atmosphere & a sense of dread that could not be replicated in a found footage film. He uses the location to create a palpable unease that slowly worked its way into my psyche that kept me slightly on edge after a short while. And he does all of that with some clever use of lighting, shadows and fog. Ben Garant’s script starts slowly, but once Jacobs is introduced, it becomes fairly eerie and picks up the pace nicely until it’s finale, which hints at a global event that subtly smacks of nothing less than global domination. 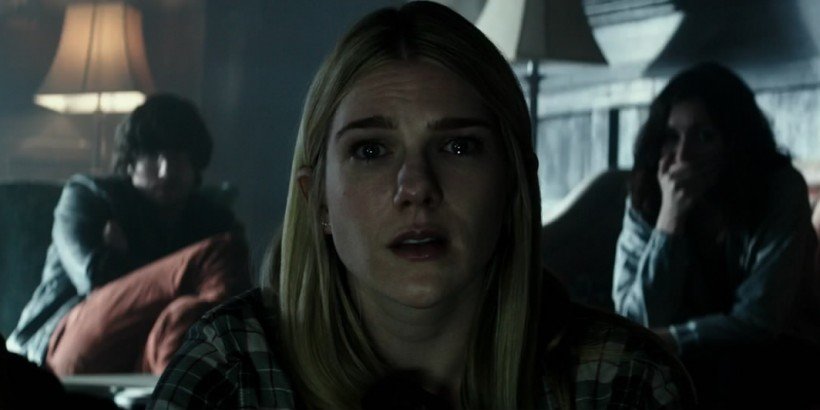 Ms. Alba does her best to make Maggie interesting, but I got the sense she wasn’t comfortable with the part. Her line readings are relatively flat, and her face is perpetually downturned here. It’s as if she decided that she didn’t want to be in the film after she committed to it, so she pouts throughout the whole thing. Lily Rabe has a ethereal beauty that suits her character well, and she does well as Sarah, who’s only looking for answers as to why she survived when no one else did. The others aren’t really much more than “Red Shirts“, and they all fulfill that role perfectly. It’s Thomas Jane that gets the highest marks here, his portrayal of Jacobs is no doubt certifiably wonky, but it worked for me. He’s having a lot of fun here and it shows. Oddly enough, this is the 2nd film I’ve seen in January that stars Mr. Jane (the 2nd being “Standoff“), in which he does a pretty good job in as well. 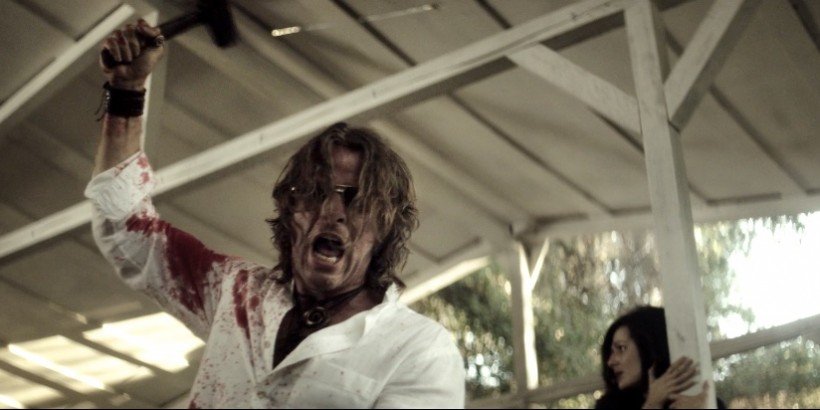 All in all, the biggest problem with The Veil is that it doesn’t seem to aspire to much more than being serviceable. Joanou does a good job but I’m thinking this was just a job for him, especially since he hasn’t directed a theatrical release since 2006’s Gridiron Gang. Oddly enough, this film was sitting on a shelf for awhile before it was dumped to Netflix, side stepping a theatrical release completely. I call this phenomenon “odd” because I always assumed that if Blumhouse films released Area 51, they’d pretty much release anything. If you’re looking for a film to kill some time with, then you could do worse than The Veil, but don’t expect too much from it. 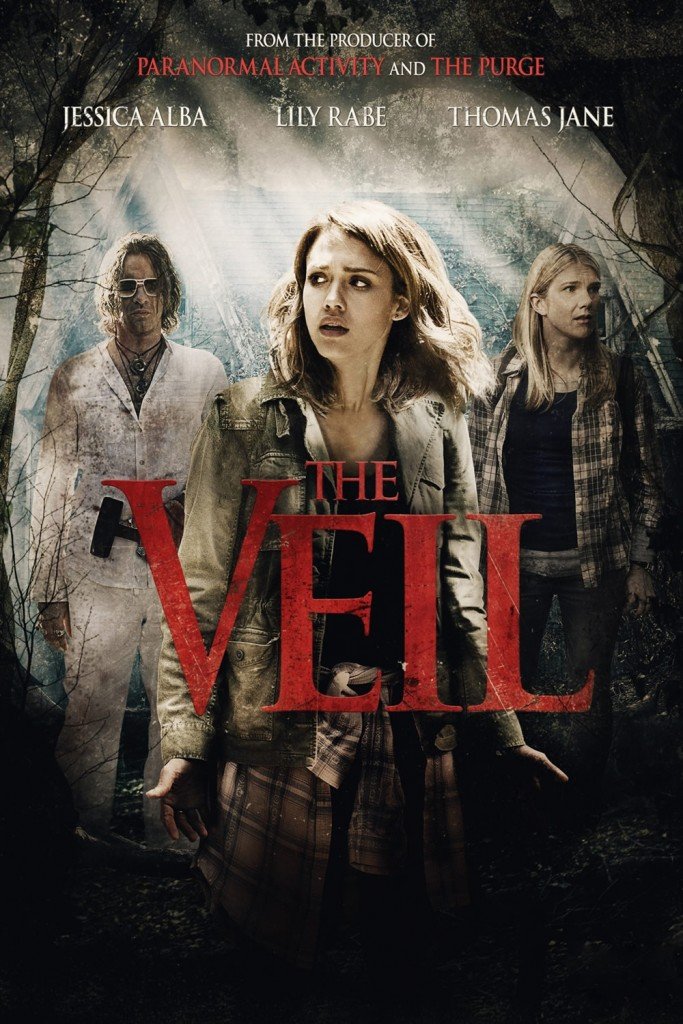 The Japanese short film Furube is a contemplative meditation on not forgetting old traditions and beliefs as modern “progress” marches on. It invokes different forms of the otherworldy: aliens from outer space and traditional gods of Japan who are believed to protect the Earth and humans.  Shibata (Yujiro Taguchi) is spending a peaceful day in […]