Hello again, Grue Believers! It’s your old pal Chad with a very special treat for you this time around! Today’s subject is something that holds a special place in this old black heart of mine, and hopefully some of you as well.

That’s right, kiddies. The one and only go to horror comic mag for a little kid like me who was sick and tired of horror comics that were hog tied by the dreaded Comics Code Authority.

But the covers were the real draw here, so to speak. Creepy  magazine, and later its companion magazines, Eerie and  Vampirella,  would set the bar for every other magazine of its kind that came after. And these are her best.

In my opinion, the earlier ones were the best ones. And mostly done by the great Frank Frazzetta. Later down the line, covers that appeared on Eerie  would also show up on Creepy    as well. Cost cutting measures, to be sure.  But these are the classic ones. The ones that stood out on the news stand like throbbing thumbs, freshly smacked by a hammer. The ones that fed the imaginations of every monster loving young boy and girl of the time that would beg his or her mom or dad to buy them the latest issue.

This cover is more along the time  Creepy  was starting to sport their sword and sorcery artwork on the covers more so than the horror stuff, but this was always a favorite of mine. The barbarian stories were really becoming popular around this time and Warren was always there to capitalize on whatever the latest trend was on their magazine covers. 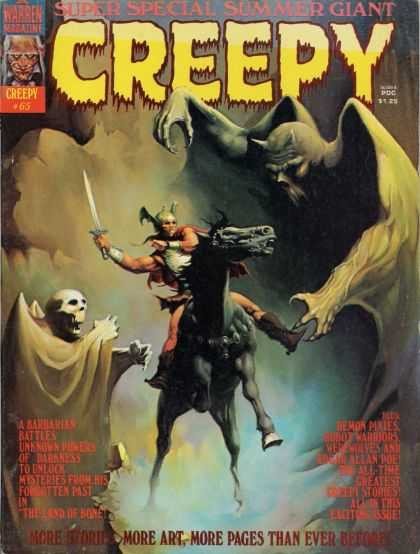 One of the many Frank Frazetta covers  Creepy  would become famous for. This one always reminded me of  Boris Karloff’s  The Mummy,  as the archaeologist sat at the table and Karloff’s mummy slowly walked out of the room. But hey, I was a weird kid. 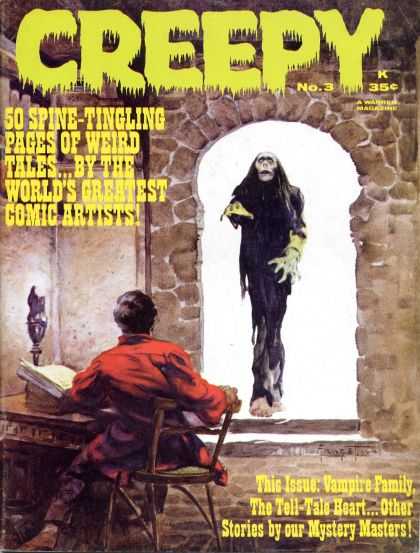 Another wild Frazetta cover. I never found out if this was Dracula, or just some random vampire. But again, as a kid, I liked to believe it was. I always interpreted it as a very haunted Drac, seeing the faces of those he’s destroyed  as they rise from the marshy bog he walks through. 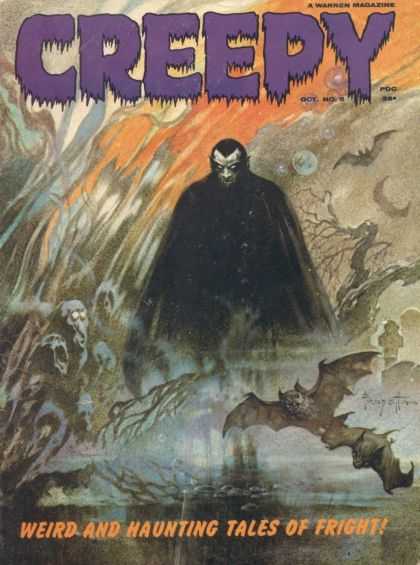 I remember having to ask my uncle who the heck is this creature on the cover of issue ten. My uncle, who had the whole collection up to that point, and let me read them at my leisure, said,  ”Frankenstein.”  I thought, ” This didn’t look anything like Boris Karloff!    I had better just go along with this and pretend he’s right.. He might not let me read anymore of these if I try to buck the system.” 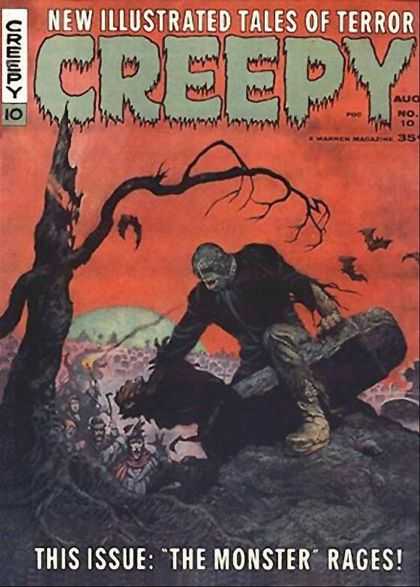 If this one doesn’t send a shiver down your spine, you may be a sociopath. Can you imagine walking along a badly lit corridor to bring the Doc his perfect brain and this guy decides it’s time to come to life and eat someone? Well, put yourself in Igor’s shoes here. 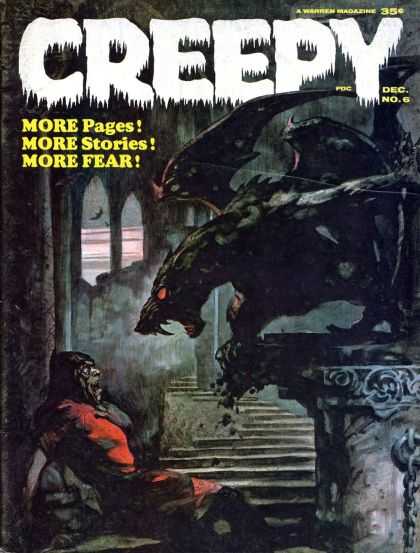 This one has always been a bit of an enigma for me. It’s credited to Frazetta, it looks like Frazetta, and no doubt it is Frazetta, but there has always been this strange Bernie Wrightson quality to it that I’ve always found fascinating.  Sherlock Holmes vs. The Wolfman.  Might not be what it’s actually depicting, but you know me. 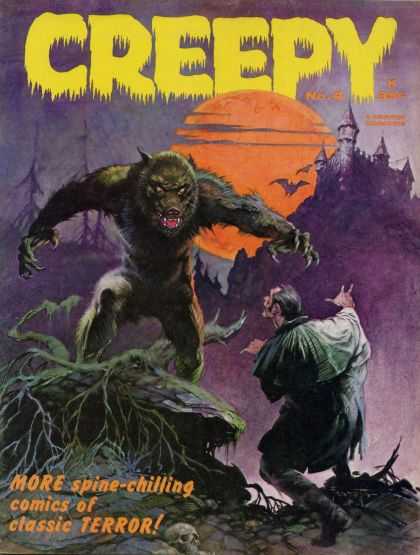 Now, you know doggone well why I like this cover. I’m a huuuuuge fan of  King Kong.  Right up there with  Jaws for me as one of the greatest adventure stories of all time. And to see Frazetta’s take on a giant gorilla chasing a pretty blonde through the jungle is just seventy-four kinds of cool. Classic Frank. 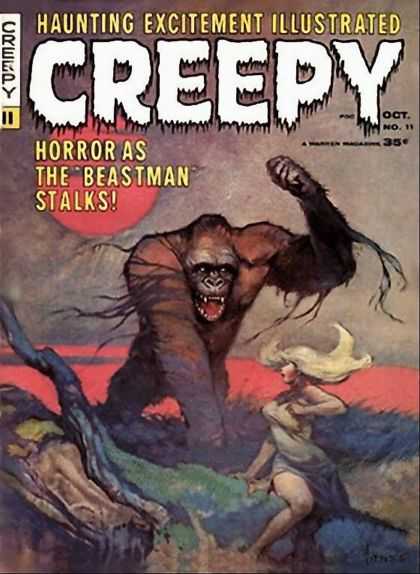 So, you want me to buy your horror magazine, eh? Here’s what you do, see?

1)Take two classic monsters.  2) Have ’em duke it out to the death in a castle’s ruin. 3) Have Frank Frazetta paint it.

BOOM!!! Sold to the monster kid in the  KISS tee shirt. 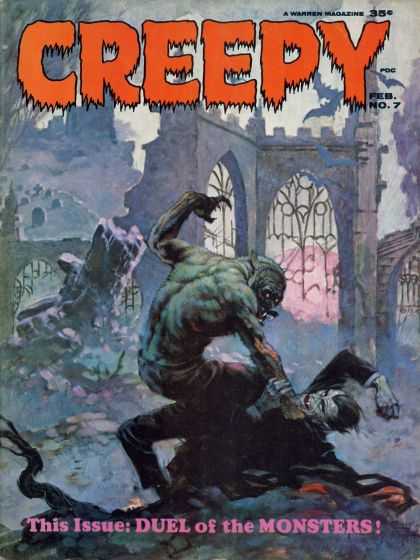 This one was a true milestone! Issue fifty of  Creepy brought together characters from  Eerie, Vampirella and a few other guests you might recognize, with Uncle Creepy presiding over the festivities. Nicely illustrated by Mike Gossard. 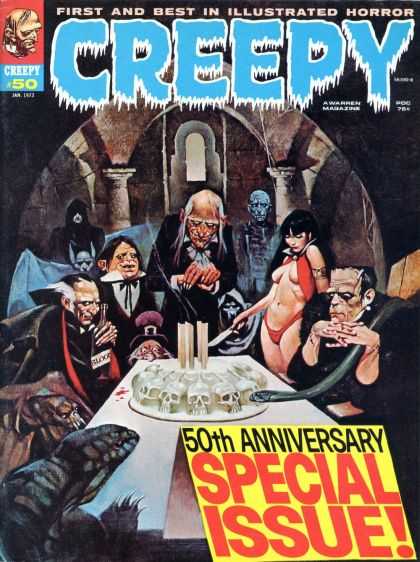 You might think I’m just putting this issue at the number one spot just because it’s well,  Creepy number one. Actually, there is a method to my madness. This cover was illustrated by one of the greatest cartoonists to ever live. Jack Davis. Many remember Jack from his humorous cartoons from  Mad, Cracked  and even some of his  TV Guide covers. But to us Grue Believers, he will forever be the man who illustrated some of our favorite stories from EC comic’s  Tales from the Crypt, The Vault of Horror, The Haunt of Fear and others. Adding  Creepy to his list of accomplishments is very cool indeed. Here’s to you, Jack! 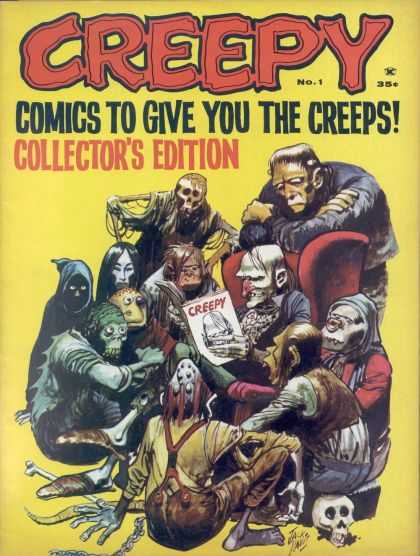 And there you have it, folks! My top ten list of  Creepy magazine covers. This was a tough assignment as there are so many awesome cover illustrations for this magazine, it was hard to narrow it down to just ten. This was really a great magazine and still is really. Thanks to Dark Horse Comics, we can go back and read these great stories in a collected format, or digitally read them anywhere on the go. Do yourselves a favor and check them out however you can get hold of them. If you love the old EC stuff, this is sort of the next generation.  Creepy  always promised  the best in fear, illustrated by the top talents in comics. And it was never an empty boast. 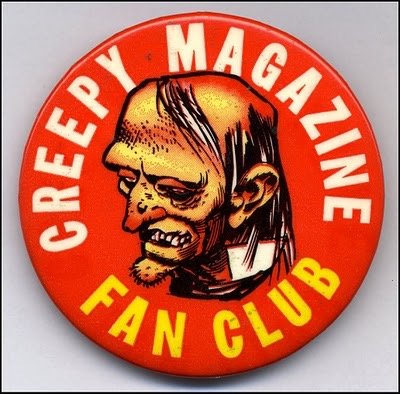 One of the biggest surprises of last fall was SYFY Channels Channel Zero – Candle Cove and the horror world was more than pleased when the channel announced there would be a second season of the popular anthology series with season two earning the subtitle, No End House. The second season debuts on Sept. 20th […]

Looks like 2021 is going to be the year of the Werewolf – at least when it comes to horror films. Today brings news of a new lycanthrope thriller titled The Hunting – and it looks like an old-school practical FX beastie might be in our future – check out the trailer. Before I lay […]

[Trailer] SHUDDER Is Ready To Lead Us To DEATH VALLEY

Lots of reasons to look forward to this one – the least of which not being the fact that it features good ole fashioned practical monster effects. Coming to us from the depraved mind of Matthew Ninaber who was a large part of one of my favorite films of the last couple of years – […]