Ever since Horror News Radio launched in April of 2013, the Grue-Crew have been huge fans of the New York City Horror Film Festival. Not only because of our very own Santos Ellin, Jr. (The Black Saint) was on the screening panel but due to their extraordinary professionalism and friendly interactions with fans, filmmakers, and the horror genre. Yes, they rock!

This year, HNR co-host Christopher G. Moore returns to the festival in November 2018 to promote his short horror feast GUT PUNCHED. The festival has sent HNR its program for this year as the festival runs from Thursday, November 29, 2018, at 7:00 PM to Sunday, December 2, 2018, at the Chelsea Cineopolis Theaters at 260 West 23rd St., NYC. We hope you are able to attend; if so, be sure to say hello to Christopher and the festival’s terrific staff.

Candyman himself, distinguished  actor Tony Todd, is set to receive 2018 Lifetime Achievement Award for his contributions to the Horror and Sci-Fi industry.

A mystery unfolds as a group of individuals are confronted by undead forces outside of an abandoned factory. Rewinding their encounters only one day before, the major players of the group go about their business as usual. As they all unwittingly gather up at a local hotel for personal reasons, an unexplanatory virus breaks out that turns people into blood-lusting beings. Consequentially, the characters are stuck at the penthouse suite they were having lunch in. As time passes, the group decides to make a run for survival before battling down to the parking lot. Through struggle, betrayal, and loss, the remaining individuals desperately make it out of the hotel alive and arrive at the factory where we first meet them. While this is only a temporary haven, they are tested once again by new circumstances. Who amongst them will survive?
Director: Sky Wang
Writers: Sky Wang, Baiying Wu (story)
Producers: Howard Chen (Executive Producer)
Starring: Martin Yang, Mingyi Yang, E’Naan Zhang, Ray Wang

Chad Michael Murray stars as reality TV producer and host Jack Wilson, who finds himself in a tough spot when his show is about to be canceled. In a last-ditch effort to spark ratings, he and his producer Angela, (Danielle Harris) choose to film their next episode at the legendary Camp Cold Brook, which was host to a horrific incident where the young campers were drowned in a nearby creek 20 years ago. Their arrival begins like any other episode… but the TV crew find that they get more than they bargained for.”
Director: Andy Palmer
Writer: Alex Carl
Stars: Danielle Harris, Chad Michael Murray, Courtney Gains

Sophie’s 18th birthday party becomes a bloodbath when six terrifying monsters descend upon her house, intent on devouring the party guests and killing anyone who tries to leave.

As her school friends are torn apart and eaten, Sophie must rally a band of misfits and take up arms to send their party crashers back to hell. To survive the night, Sophie will face her destiny; monsters are real — and she’s the only one who can stop them.

Sara travels to the hot spot where one of the most extraordinary contacts with extraterrestrials in history took place. The forest ranger accompanies her, but they’ll soon be attacked by a creature that lives in the depths of the forest, being forced to take refuge in an abandoned military barracks.
Director: Marc CarretÃ©
Writers: Marc CarretÃ©

After a tragic event last year at Brooklyn’s Annual Enema Party, a group of queer friends is stalked by a unicorn masked killer out for revenge, taking down one drag queen down at a time.

An expectant couple’s intimate weekend turns to terror when they discover their secluded country inn is a haunted maternity home where unwanted infants and young mothers were murdered. Inspired by the true story of the ‘Butterbox Babies’ and their macabre chapter in Canadian history, THE CHILD REMAINS is a twisting supernatural thriller that has already won 15 Best Feature Prizes on the global festival circuit. A tribute to vintage atmospheric horror such as The Shining, Rosemary’s Baby, and The Orphanage, the film stars Cannes Best Actress winner Suzanne Clement (Mommy), Allan Hawco (Frontier), Shelley Thompson (Trailer Park Boys) and genre hero Geza Kovacs (Scanners). Written, directed and co-produced by award-winning filmmaker Michael Melski (Charlie Zone, Growing Op) and produced by Craig Cameron (The Corridor), THE CHILD REMAINS is about the evil that lurks behind the postcard. You’ll sleep like a baby.
Director: Michael Melski
Writer: Michael Melski

A man and woman (Thomas Cocquerel, Camille Stopps) awaken post-surgery in an abandoned sanitarium with no memory as to who they are or how they got there. They quickly discover they are not alone. A crazed doctor (Angus Macfadyen) claims to be their only chance for a full recovery as well as the only hope for a return to the lives they left behind. Through painstaking physical therapy and stomach churning meals they plead for freedom, instead the doctor just toys with them. Finally able to summon the strength to challenge the doctor face to face they make their escape back to civilization only to discover the jaw dropping reality of who they truly are.
Director: Rob Grant
Writers: Chuck McCue, Jules Vincent
Producers: Chuck McCue, Jules Vincent, Lars Lehmann, Michael Peterson

Five New York City Millennials escape the Big Apple for a rustic Thanksgiving weekend in the country, but something threatens to shatter their peaceful getaway and they are targeted for murder.

Nicole, Ted, Lorena, Alex, and Sebastian are off to party, but upon arriving at their idyllic farmhouse getaway, everything seems perfect as the friends let down their guard with food, drinks, and sexy romance. The mood quickly turns sour as Nicole’s painful memories begin to encroach and her friends suddenly start to go missing…one-by-one.

As their savagely butchered dead bodies begin to turn up, the race is on for Nicole and her surviving friends to find the unknown killer before it’s too late.

When a train derails into the river, its surviving passengers are faced with a grim challenge… die in the wreckage or face the unknown that awaits them in the murky waters below.
Director: Dale Fabrigar
Writing Credits (in alphabetical order):
Suzanne DeLaurentiis
Dale Fabrigar
Everette Wallin

In a world where fairy tales are much more than tales, monsters and humans are forced to live alongside one another. Much like in our world, many people find it possible to peacefully coexist, however there are plenty of others who do not. Nick Lane is one of the few people who stand in the middle and try to bring both sides closer together instead of pushing them further apart. However, when the tension that has been building between both sides reaches its breaking point, the middle isn’t necessarily the best place to be. Nick’s morals are tested and his own weaknesses are revealed as all these problems come closer to home. 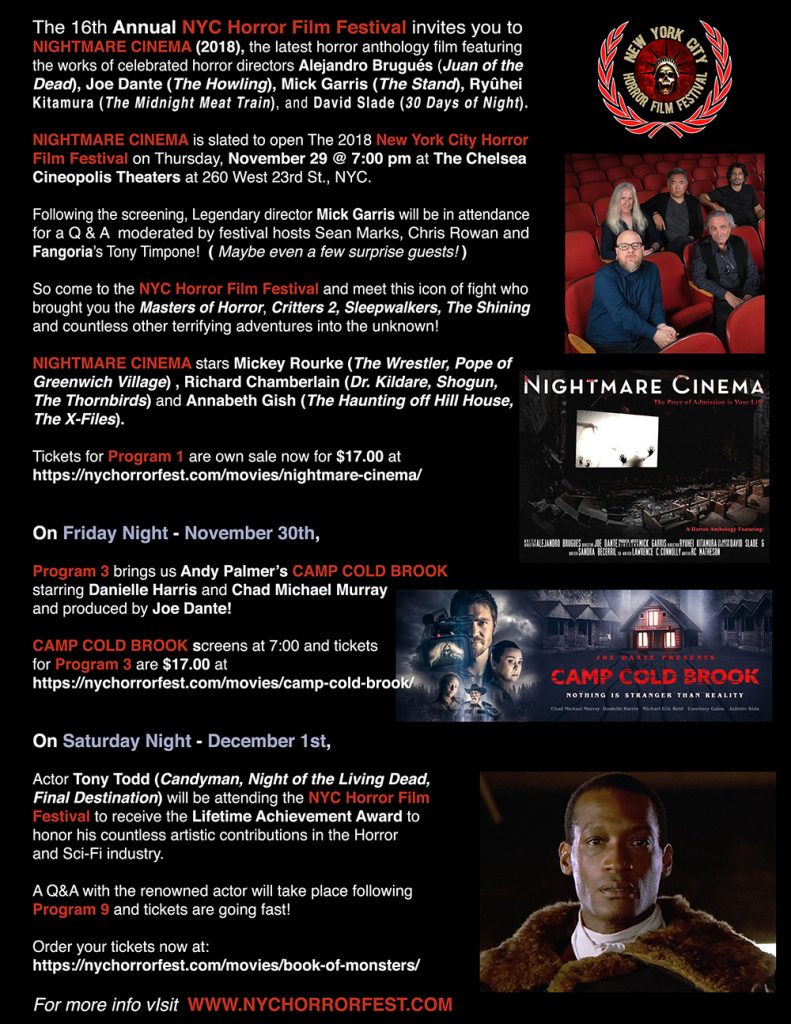 There’s something we haven’t seen in a while – mutant frogs – but, the trailer for the “eco-thriller” Strange Nature gives us mutant frogs and so much more.   Yeah – it’s time for nature to run amok yet again. The press release provides us a wealth of info – read and learn! “By moving […]

“They will dissect you! And they will kill you! In that order!” Well, that doesn’t sound good. Join your faithful Grue Crew – Doc Rotten, Chad Hunt, Bill Mulligan, and Jeff Mohr – as they do their best not to get dissected or killed on their journey Beneath the Planet of the Apes (1970). Decades […]