Been a busy week in the world of horror – might actually require two seperated digest posts!   We’ve got trailer debuts, production news, upcoming blu-ray releases – it’s a ton of info so – let’s get started.

Trailer For ‘Hereditary’ Rocks The Genre

We talked about this one a week or so back – showed you the key art and brought you up to speed on the fact that folks at Sundance had been blown away by the screening held there.   Capitlaizing on all that good press the smart folks over a A24 have put together a trailer and damn, it’s a pretty damn fine one.

“When Ellen, the matriarch of the Graham family, passes away, her daughter’s family begins to unravel cryptic and increasingly terrifying secrets about their ancestry. The more they discover, the more they find themselves trying to outrun the sinister fate they seem to have inherited. Making his feature debut, writer-director Ari Aster unleashes a nightmare vision of a domestic breakdown that exhibits the craft and precision of a nascent auteur, transforming a familial tragedy into something ominous and deeply disquieting, and pushing the horror movie into chilling new terrain with its shattering portrait of heritage gone to hell.”

Ths one has quickly become the buzz of the genre and we’ll all be waiting with baited breath till that June 8th theatrical roll out date hits. 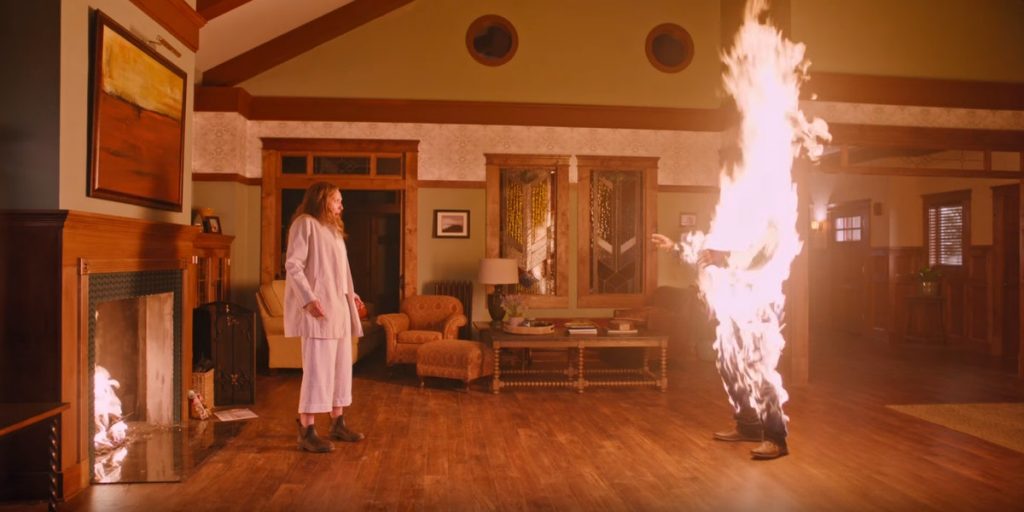 Filed under “sequels we didn’t know we needed” comes the news that Deep Blue Sea 2 is ready to attack and is circling a Blu-ray, VOD roll out on April 17th.   The follow up to the 1999 (yes, it’s actually been that long) smart shark chomp fest tell the following story:

“A shark conservationist Dr. Misty Calhoun (Danielle Savre) is invited to consult on a new, top secret project run by pharmaceutical billionaire Carl Durant (Michael Beach). She believes the project, performed at a remote, sea-based facility, focuses on extracting shark antibodies to help work toward cures for human diseases. However, Dr. Calhoun is shocked to learn that the company is using unpredictable bull sharks as its test subjects, and Durant has bio-engineered a shiver of highly intelligent, super-aggressive bull sharks. When science meddles with the time-tested process of nature and nurture, the outcome can be deadly.”

Warner Brothers is giving this one a royal roll out with a pretty immpesive slate of special features – they include:

Deep Blue Sea 2: Death by Shark (Featurette) — In this wildly fun featurette, the cast and crew of Deep Blue Sea 2 discuss their characters’demise and the jump-out-of-your-seat moments in the film.

Deep Blue Silliness (Gag Reel) — A collection of fun outtakes and bloopers from the feature film showcasing the cast and production team.

Deleted Scenes — A few filmed moments that didn’t make the final cut of Deep Blue Sea 2. But we know you still want to see them.

The press release also informs us that:

“Deep Blue Sea 2 is a true sequel, staying within the mythology of the original film, and taking the next step in the evolution of the sharks … and their human counterparts,” said Mary Ellen Thomas, WBHE, Vice President, TV Marketing, Family & Animation. “This time, there’s more perspective from the sharks, giving greater personality to the ‘villains’ in this film. It’s a thrill ride that will keep the audience guessing throughout.”

Deep Blue Sea has always been a guilty pleasure film more me and I’m curious to see where they head with the story after all these years so – bring those smart sharks on I say! 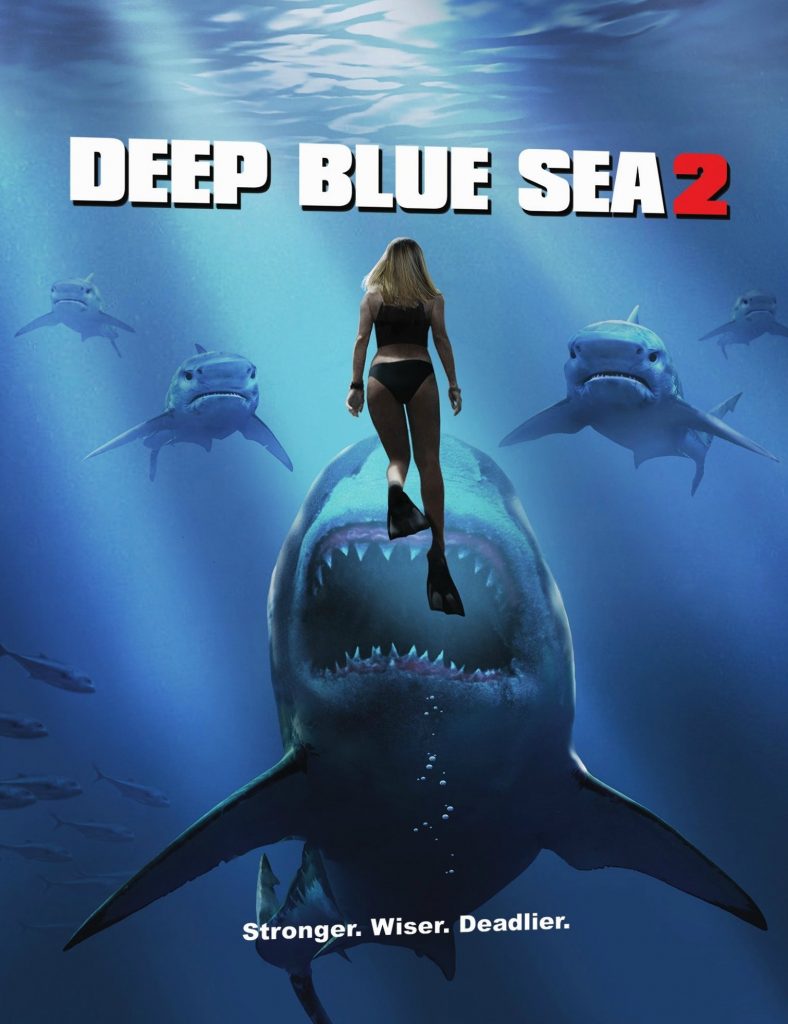 Hulu Gives Us A Small Tease of ‘Castle Rock’

As you might imagine   – this one is ranking high on my “can’t freaking wait to see it” list.   The upcoming series Castle Rock – from Stephen King and JJ Abrams has the potential to be King fans wet dream and I’m even more ramped up now that Hulu has given us a teeny little taste of what they are up too.

An amazing cast – an intertwining of King’s expansive story universe – what the hell more could you ask for?

Coming at us this summer – if you don’t yet subscribe to Hulu – I’d be taking care of that now. 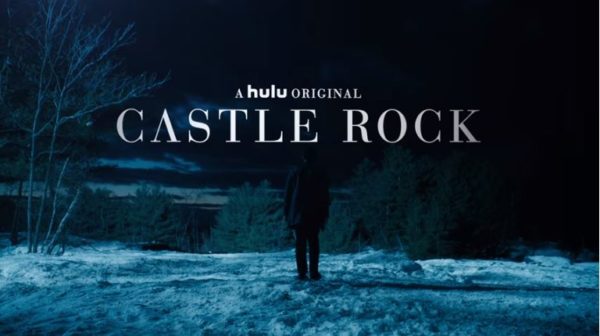 Seriously, what the hell did we all do before Scream Factory came unto the scene?   Consistently bringing us an incredible aray of must-own releases they once again continue that trend as they announce a 3-disc Blu-ray collection of mutant baby madness.   From their Facebook page:

“We’re ending the month with truly exciting news that we are releasing all three original IT’S ALIVE films on Blu-ray this Spring!

A proud couple’s bundle of joy is really a newborn terror in filmmaker Larry Cohen’s cautionary original IT’S ALIVE that tapped into environmental fears. The horror grows when multiple child monsters rampage in the first sequel IT LIVES AGAIN as two brave parents try to stop them by becoming the bait for their spree. The now global mutants are rounded up and relocated to a far-flung island in IT’S ALIVE III: ISLAND OF THE ALIVE. Will a parent’s greatest nightmare become the world’s gravest fear? Find out … if you dare.

Extras are in progress and will be announced at a later date. The art you see showcased (illustrated by Joel Robinson) will be on the slipcase. Although we can’t show you them yet, the plan is to have the original theatrical key art for each of the films on the three separate blu-ray cases that will be inside of the case. We’ll share those later as well.

National release date is May 15th but if you pre-order now directly from our site you’ll receive the set two weeks early!”

As the announcement states – special features are forth-coming but we do have the packaging art for you today – check this out! 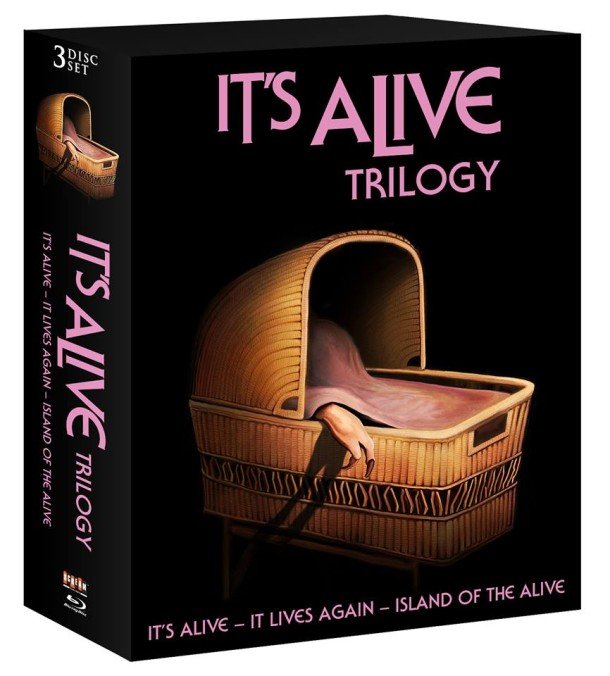 We reviewed it on our fabulous Gruesome Magazine podcast ( you can CLICK HERE to check out that little piece of awesome) and word just dropped that it will be making its way to home video – and all the details are below. “Meet Kurt (Joe Keery), a 23-year-old rideshare driver for Spree, who is […]

According to Variety, American Zoetrope and director Victor Salva are finally set to bring the Jeepers Creepers franchise back to life with a third film to begin production in Vancouver in early 2016. The first two films, Jeepers Creepers (2001) and Jeepers Creepers 2 (2003) are no slouches having grossed $120 million at the box […]

Later this month we’ll all be treated to a revamped journey into the world of RESIDENT EVIL – the looks we’ve gotten so far have looked promising but this latest trailer is literally the stuff of nightmares. Let’s take a trip to Raccoon City, shall we? I’ve been pretty vocal in the fact that I […]