The second New Jersey Horror Con in Woodbridge, NJ was held Friday, September 22 through Sunday, September 24, 2017.   The first one which I had the pleasure of attending had such a big turnout that they had to move it to a larger facility and added a film festival.   This con has put itself onto the map quickly thanks to Filmmaker/producer Ryan Scott Weber and Comic Book Men producer/ pop culturist Rob Bruce.   The vendors at the New Jersey Horror Con are second to none; I like the description someone once used: a flea market for horror fans.   There was plenty for everyone, this includes soaps, jewelry, clothing, custom artwork (one of which I scored for my wife), fx props and the list goes on. The film festival included both shorts and feature-length films.   Among these were Michael Walker’s Cut, Shoot, Kill which if you read my review for Gruesome Magazine I really enjoyed as did the crowd at the Con.   Also showing was Lloyd Kaufman’s Return to Nuke Em High Vol. 2.   Another pretty cool film played there some of you may have heard of; a little ditty called The Barn which I, unfortunately, did not see until I had already submitted my Top 10 last year, but if I had it would have been number one.   One of my heroes, the late great Santos Ellin Jr. is known to many as The Black Saint told me I would dig this film and as usual, he was right. One of the things I really enjoy about the New Jersey Horror Con is the accessibility to the guests.   They are right there on the floor even some among the vendors; you can go oogle, get an autograph or have a chat and/or take a photo with; all this without feeling like you are at a military camp.   Some of the guests included: Sean Astin and Kerri Green from Goonies, Markie Ramone from you guessed it, the Ramones, Barry Bostwick, Crispin Glover, little and big Michael Myers from Rob Zombie’s Halloween Daeg Faerch and Tyler Mane along with Scout Taylor Compton and Kristina Klebe.   Also of interest were reunions from cast members of Night of the Demons, The People Under the Stairs and Cabin Fever.   Kevin Tenney, director of Night of the Demons was also there and was one of the nicest most personable people you can talk to.   I tagged along to meet him along with the guys behind The Barn writer and Director Justin Seaman and Cinematographer Zane Hershberger.   Kevin was a big influence on them so it was really special to see the interaction between them. 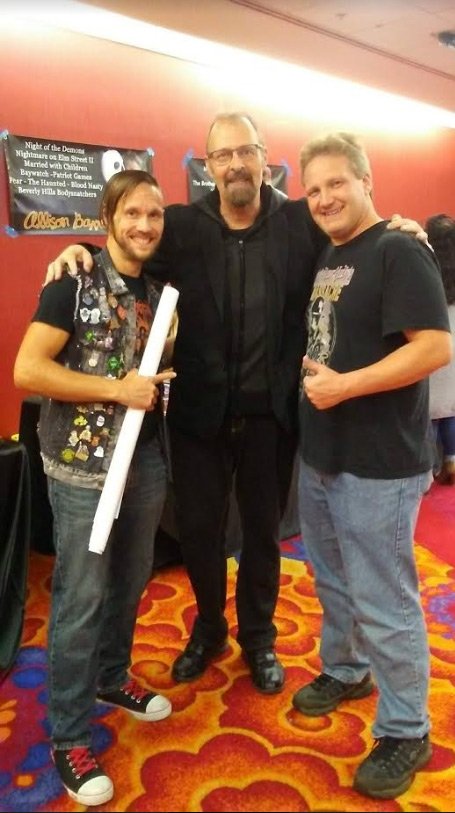 Among the vendors, there was plenty to like for everyone. One of the vendors was Gruesome’s neighbor at another con, Petunia Rocks who sell everything from really cool umbrellas to jewelry to clothing. 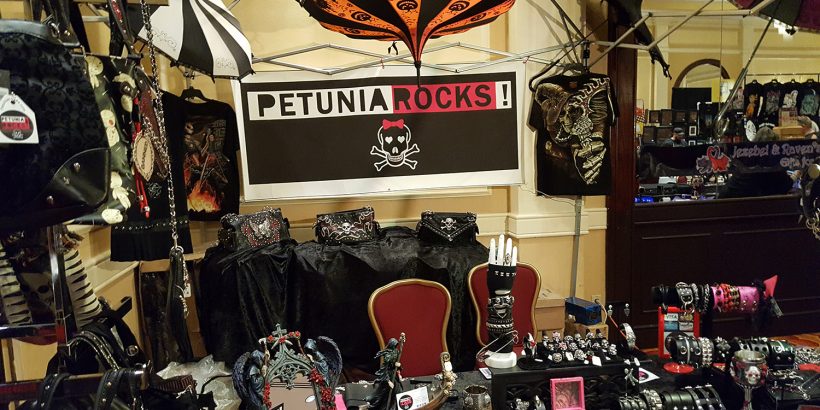 Have you ever dreamt about sleeping with your favorite horror hero or villain?   Well, now you can with these custom pillows by Tamme Handmade.   Her items can be found at www.tammehandmade.com 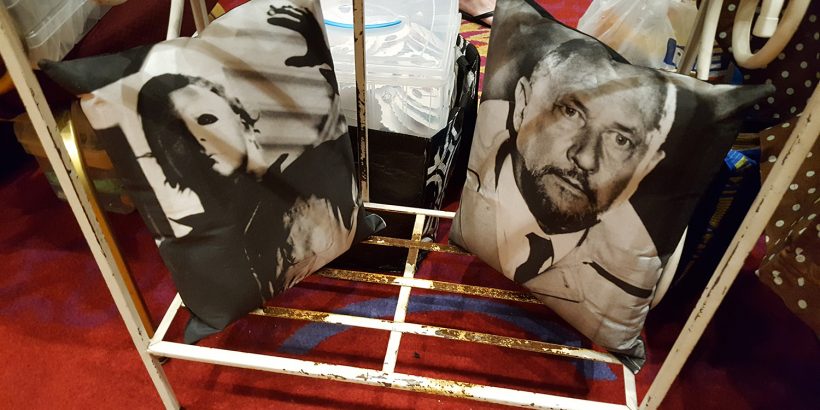 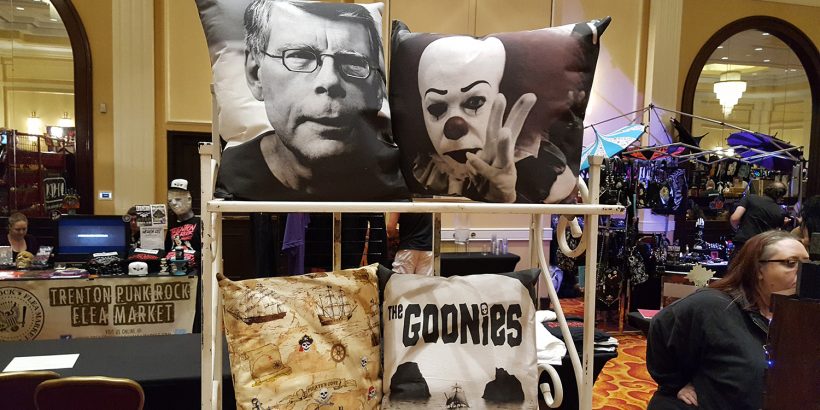 Some custom artwork by Scott Pensak was on display.   Scott molds everything from clowns to pumpkins to man-eating plants to skeletons.   I bought one of his pieces home to my wife which she loved.   Scott can be found at www.etsy.com/shop/HOLIDAYODDITIES 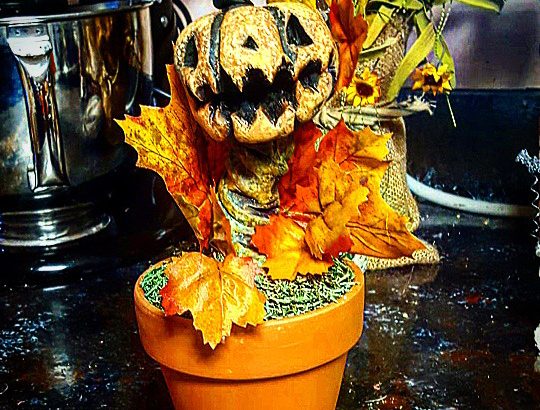 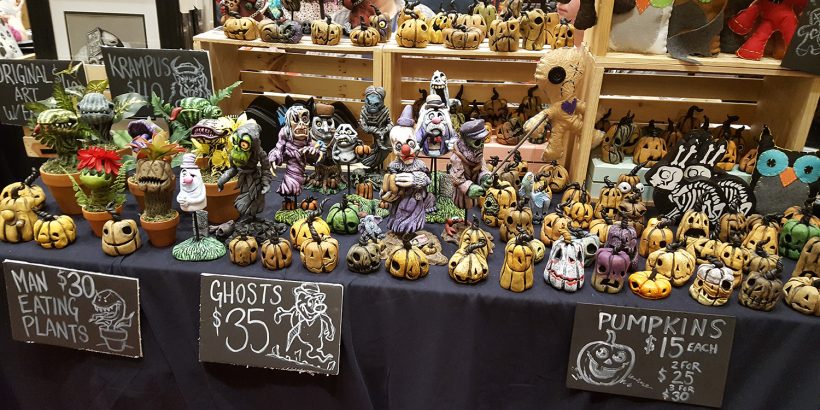 More custom artwork on display was by Brian’s Art of Creation.   On display was part of his Little Heroes Project which got started as a project to inspire and support children fighting the disease SMA (Spinal Muscular Atrophy).   He takes photos of children and uses his artistic talent to mold them into little creatures which the children love.   You can find his art at www.alter-ego-dezines.com or www.alteregodezines.storenvy.com 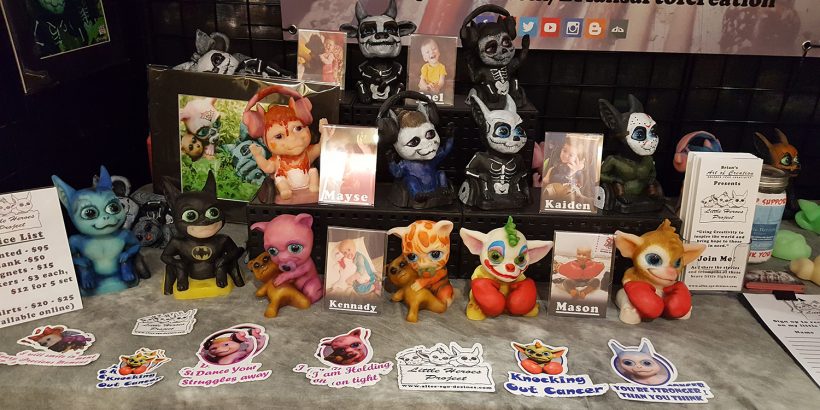 Also in attendance was special effects prop artist Dave Nagy.   On display, he had his zombie made up and also some lovely props.   Dave’s work can be found on Facebook via Dave’s Dark Realm. 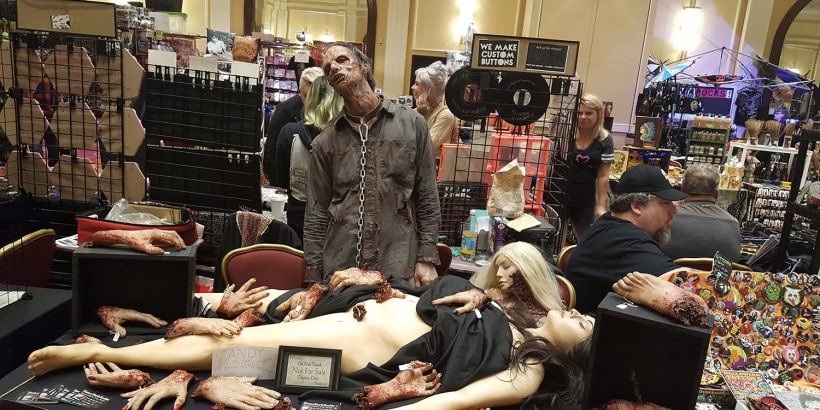 What would any con be without the people who dress up and make it fun?   There were clowns, monsters, masked killers and even a baby werewolf which was an excellent piece of art itself and of course Father Evil who always refers to me as Kevin James. 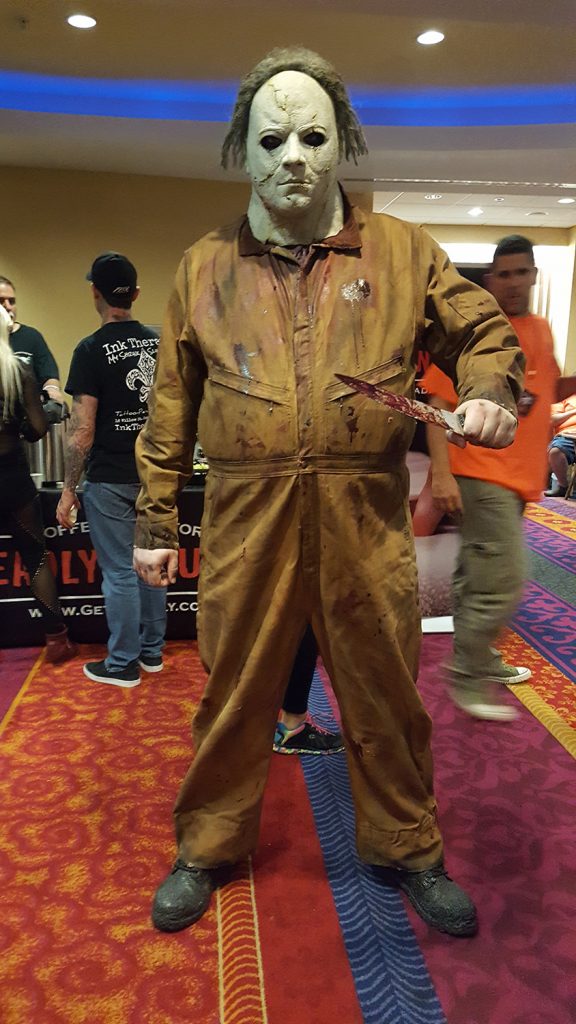 While there I met the CEO of Northgate Pictures LLC, Jason Delgado.   Jason has some production credits under his belt one of which includes the Indie film Easter Sunday which he was kind enough to give me a copy for review along with some other swag.   Jason also had the coolest line on a business card which reads: “This certifies that you met Jason Delgado and found him to be a much better filmmaker than Eduardo Sanchez”….I have to agree. 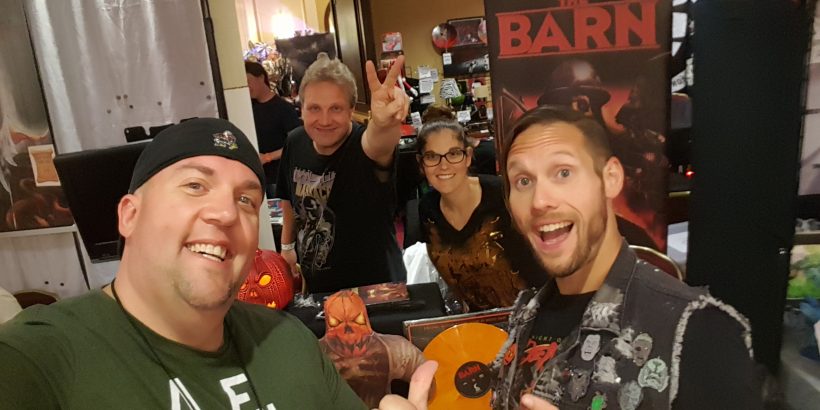 The highlight for me was getting to hang out with some of the greatest people in the industry, the up and comers behind The Barn; Justin and Tanya Seamen and Zane Hershberger.   As I stated previously The Barn was screened on Friday night and on Saturday they sold out of DVDs.   Not only did they have DVDs of The Barn on hand they also had other merchandise from The Barn including a board game, video game, pillows, pins, old-school VHS and CDs and vinyl of the soundtrack by Rocky Gray.   These people are some of the nicest you will ever meet and they made a phenomenal film in their nod to 80’s horror, The Barn.   Look for it to be out soon on Blu-ray.   They also have two anthology projects coming up entitled 10/31 and Cryptids so be on the lookout and keep supporting Indie horror.   If you haven’t done so check out their films, you will not be sorry. 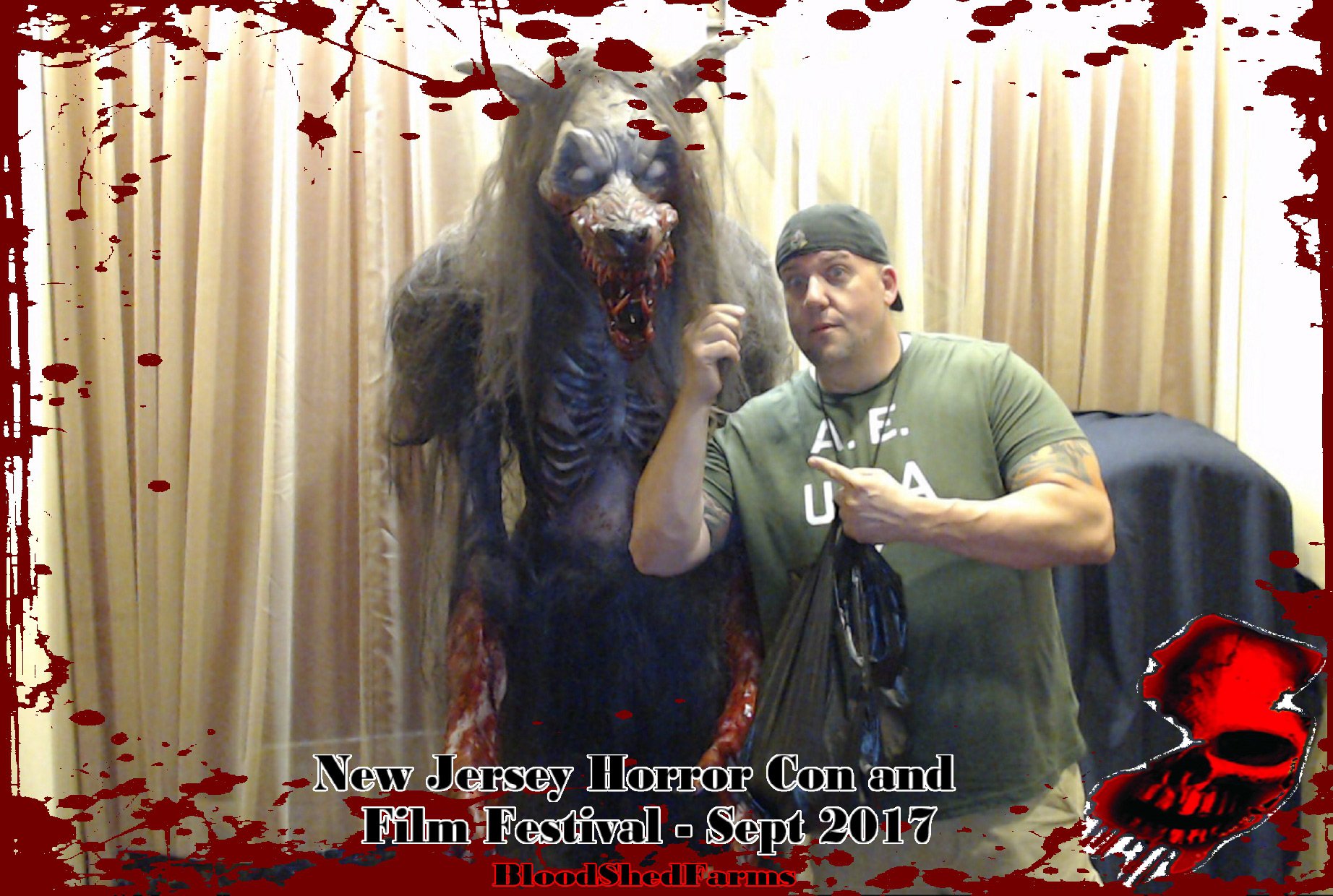 The second New Jersey Horror Con was a complete success and I had a blast and want to thank them for allowing me to cover it.   I am certainly looking forward to the third, I will keep you all posted via podcast and my writings when that is and of course I expect to see you there!

There’s something we haven’t seen in a while – mutant frogs – but, the trailer for the “eco-thriller” Strange Nature gives us mutant frogs and so much more.   Yeah – it’s time for nature to run amok yet again. The press release provides us a wealth of info – read and learn! “By moving […]

The Trailer Debut For ‘TRICK’ Bring Us A Horror Treat

The Halloween season is upon us and what better way to celebrate than with a good old fashioned slasher flick. We talked about TRICK briefly last week when some first look pics dropped – and today we get the trailer for the bloody duo of Patrick Lussier and Todd Farmer. Ready to scream? Directed by […]

Trailer For ‘Scarecrows’ Will Have You Avoiding The Cornfields

Cornfields – and the things that hide in them – have long been the fodder of many a horror film. Same goes for Scarecrows – damn things are just spooky. UnCork’d Entertainment is bringing us SCARECROWS! Got a trailer and all the other info you need – let’s start with the video, shall we? Here’s […]