While at first glance it may seem a bit derivative of films like I Know What You Did Last Summer, The Wake (written and directed by, as well as starring, Bryan Brewer), just barely manages to set itself apart from them with an ending that takes a sharp 90 degree turn away from everything that comes before.

The Wake tells the story of five friends who attend — wait for it — the wake of a child that was accidentally killed when one of them, Tyler (played by the multiple hat-wearing Brewer), drives drunk and hits him.  Tyler is joined by his girlfriend Casey (Allie Rivera, who also co-produced and wrote the story along with Brewer), Ben (Michael Aaron Milligan), Ginger (Kristen Dalton) and Ashley (Amanda Musso). Upon arriving at the remote house where the wake is being held, they are greeted by the kid’s mom, Nadine (Darla Delgado) who does not appear shocked, angry or appalled that they are at her house. It isn’t long before things take their predictable turn for the worse as Casey begins to feel ill and stumbles off before collapsing. Sometime later she awakens, bound and gagged.  After freeing herself, Casey finds Tyler in the same condition and they, in turn, find Ben. What seems to be a clear cut case of revenge on the part of Nadine becomes a bit cloudy when the threesome is confronted by a menacing figure wielding a large knife and wearing a burlap mask that looks a bit like the hooded killer from The Town That Dreaded Sundown.  After this suitably creepy looking guy magically disappears when their heads are turned, Tyler and Co. follow some noises and discover Nadine who is also bound and gagged as they had been.  At this point, it seems like what was surely Nadine’s revenge plan is anything but. 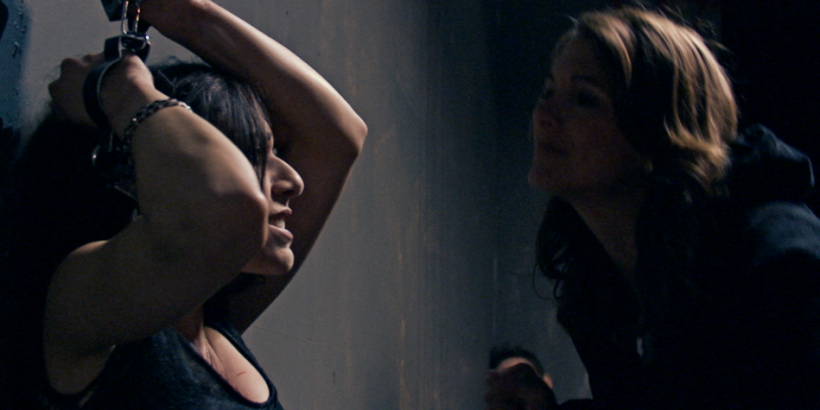 Brewer and Rivera, along with co-director Faouzi Brahimi, have crafted a story in The Wake that at times seems clever only to turn around and seem like it was written in one session with no thought towards an ending or what had previously taken place.  It’s safe and spoiler-free to say that some of the actions are explained away in the final act, but until that point some of them are just maddening in their stupidity or are so hard to accept that it takes you out of the movie and by the time they ARE explained, it seems like it’s only because they were noticed during the actual filming. 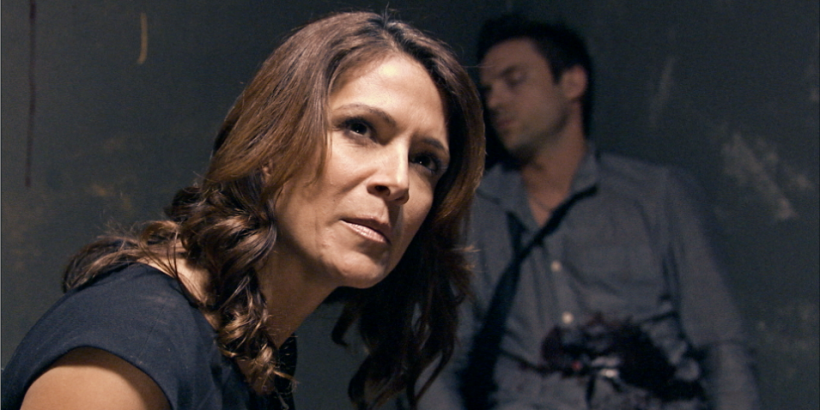 The characters themselves are all believable enough aside from one scene early on when Ben and Ginger toss sexual innuendo back and forth while Tyler proposes to Casey (spoiler- she says ‘Yes’).  Keep in mind this is during  the wake of a dead child. A dead child whose death they are responsible for. The only thing this accomplishes is that it makes them unlikable to the point where what happens in the remaining 70 minutes seems almost justifiable. The only one who, aside from Tyler, that shows any compassion is Ashley and her character is too airheaded to be of much use.  Fortunately, the dialog rarely veers off into cheese aside from a couple of times where things seem a little over-melodramatic.  That, however, could be chalked up to the acting which, for the most part, is solid and above what you would find in other indie horror films.  As for the actual horror involved, The Wake does offer a fair amount of tense and suspenseful moments, and the aforementioned menacing burlap-bag-hooded figure works quite well as a villain (at least until he’s caught up in a scene ripped straight from an episode of  Scooby-Doo, Where Are You?).  There’s not a lot of blood or gore (which shouldn’t define ‘horror’ anyway), but when there it’s used effectively.

In the end, The Wake (available now on VOD), is a slightly better-than-average entry in the indie horror genre that is saved from a rather hard-to-accept script by its cinematography, effective use of jump scares and twist ending.

Young Abigail Tate’s mother and father drop her off for her first day of daycare at a seemingly nice couple’s home, never suspecting what she will fall victim to there when sordid secrets are revealed in the Canadian horror/drama short  The Last Bastard. The film slowly unravels its mysteries and builds to an impactful […]

One Night of Fear is said to be based on a true story. One Night of Fear opens on a nice sunny day in Ocala National Forest as what looks like Ranger Elmer (Russ Forga) but is later introduced as the caretaker is doing his rounds. In his early moments on film, you get the […]