After hitting the festival circuit as a film titled February in 2015, The Blackcoat’s Daughter eventually inked a distribution deal with A24 and finally received a limited theatrical and VOD release on March 31, 2017. It’s a bit of a puzzlement as to why it took so long to wrangle distribution. The Blackcoat’s Daughter is a deeply disturbing film that delivers its atmospheric, packed punch in its own time. Make no mistake about it; when it does deliver, this film packs a wallop.

Written and directed by Oz Perkins, The Blackcoat’s Daughter at first glance, appears to be the story of three young women – Katherine or Kat (Kiernan Shipka), Rose (Lucy Boynton), and Joan (Emma Roberts) – but it is far more than that. Rose is an upperclassman at Bramford School, a private Catholic school for girls and Kat is a freshman. As the film opens, it is February and the last day of school before a weeklong break. Parents are arriving to pick-up their children and some first head to an auditorium for a parting performance by some of the students. Rose attends the performance at which Kat plays the piano and sings. Neither of the girl’s parents will be arriving because Rose told her parents the wrong day, supposedly by mistake, and Kat, … well, no one can quite figure out why Kat’s parents aren’t there to pick her up. Rose discloses to a friend that she is pregnant and she told her parents the wrong date so she would have time to tell her boyfriend that evening.

Joan doesn’t make her first appearance until 15-20 minutes into The Blackcoat’s Daughter as she gets off a bus on a cold February evening. She immediately heads into the bus station restroom where she removes a hospital-type identification bracelet. A few minutes later, while sitting on a bench outside, Joan is approached by Bill (James Remar) who only wants to see if there is anything he can do to help her. Since it turns out they are going the same direction, Bill offers Joan a ride with his wife, Linda (Lauren Holly), and him. A this point the stage is set for this unique film.

It is not nearly strong enough to describe The Blackcoat’s Daughter as an atmospheric film. Its atmosphere is suffocating, stifling, oppressive. The muted, drab colors of a northern clime in February, along with the bland design and furnishings of the Bramford School, are the foundation of the film’s atmosphere. The sound of the winter wind blowing combined with the swelling and fading tones of the music supplied by Elvis Perkins, craft an almost constant, ominous drone that drills into your brain like the buzzing of a cloud of insects and produces an omnipresent, and at times nearly unbearable, feeling of tension. The Blackcoat’s Daughter is populated by frequent long scenes without dialogue, allowing the actors to add to the tension through often ambiguous or contradicting facial expressions and body language. At first viewing, your response might be, “Wait, what?” Admittedly, the story can be a bit elusive, but after a second and third viewing, more is revealed and at each revelation, the film delivers another horripilation inducing blow.  Indeed, the atmosphere seems deafening even though the sound and music buzzes incessantly at low volume just underneath the surface! It is an absolute certainty that something very bad is about to happen at Bramford School.

Kiernan Shipka (Mad Men, 2007-2015) as Kat, delivers a nuanced performance, causing the viewer to frequently wonder what is truly going through her mind. In a scene with the Bramford School’s priest, Kat has the slightest trace of a smile on her face at what would seem an inappropriate time. We’re not exactly sure why she is smiling, but there is no doubt the reason isn’t what she tells the priest in answer to his question, “What are you smiling about?”

Lucy Boynton and Emma Roberts give equally adept performances as the ambiguities of each of their scenes lead the audience to wonder what is really happening. At the same time, when the uncertainties are clarified (to a certain extent), they all make sense.

James Remar and Lauren Holly as Bill and Linda, the couple that give Joan a ride, also contribute to the stories uncertainty. Bill seems like a genuinely nice man but at the same time, it seems a little odd for him to be so caring about a stranger on a bus station bench. To add to the feeling that something just isn’t right, Linda is not at all happy about Joan joining them as a passenger. For a time, the viewer is left to wonder at the dichotomy of each of their reactions to Joan.

The producers of The Blackcoat’s Daughter have impressive, horror related resumes. One of the producers is Bryan Bertino, who wrote and directed The Strangers (2008), Mockingbird (2014), and The Monster (2016). Some of the rest of the producers were also involved in Bertino’s films as well as Clown (2014), The Quiet Ones (2014), and another Oz Perkins film, I am the Pretty Thing That Lives in the House (2016).

Perkins and crew have crafted a very smart movie that also expects its audience to be smart. This is not a film for a relaxing, mindless watch. However, the next time you’re in the mood for a slow burn, thought provoking, atmospheric horror film, cue up The Blackcoat’s Daughter. You won’t be disappointed and may even go for second and third go-arounds.

A24 and DirecTV will release THE BLACKCOAT’S DAUGHTER in theaters and On Demand March 31, 2017. 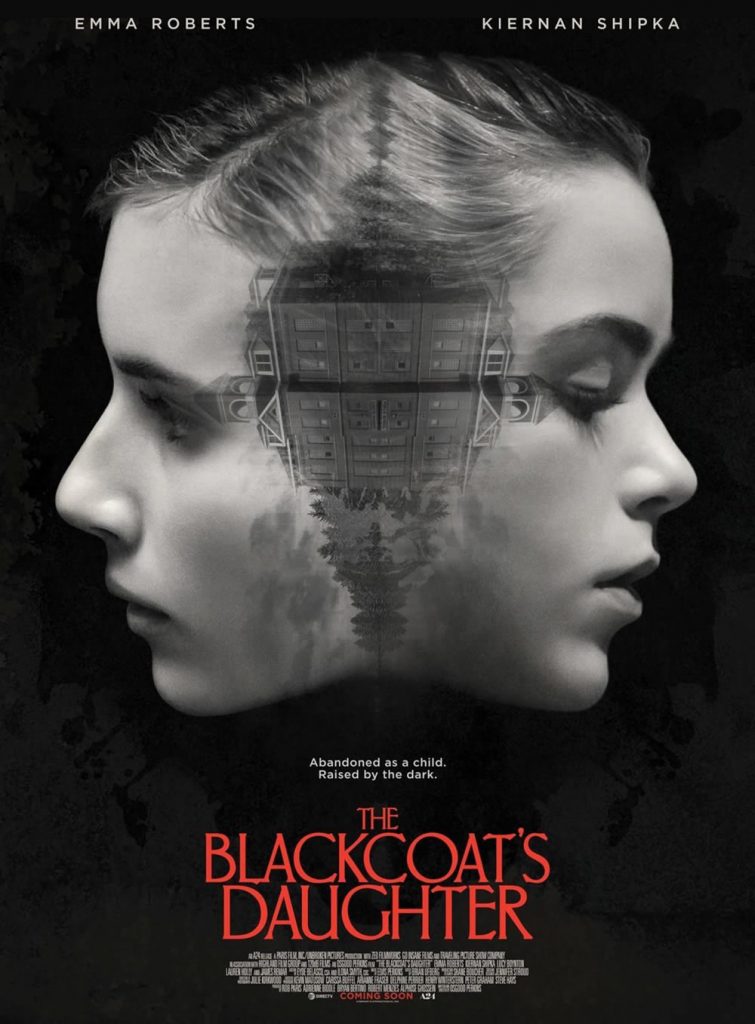 Jeff Mohr is thrilled to be reviewing a film based on the works of the late author Michael McDowell. Writer-director Griff Furst adapts Cold Moon Over Babylon as the feature film Cold Moon (2017) from Uncork’d Entertainment. The movie stars  Josh Stewart (“Shooter”, The Dark Knight Rises), Christopher Lloyd (the Back to the Future series), […]

“Agatha” (2016): Terror Awaits a Young Orphan at the Top of the Staircase

If classic horror stories featuring creaking stairs, shadowy rooms in old mansions, and the occasional thunderstorm to help set the mood are your style of fright film, I can’t recommend writer/director Timothy Vandenberg’s exercise in eeriness Agatha enough. This short films absolutely drips with atmosphere and the performance by young star Louise Ogle is […]

Eli Roth is in the business of shock value.  Cabin Fever  made an initial splash because of its sudden jolt of sexually themed skin crawling gore, splicing in  non sequitur bits of comedy and dude bro characters that allow audiences to lack sympathy for the characters when they meet their fates. The same goes for […]