We at Gruesome Magazine recently had a chance to sit down and talk with Amber Dawn Fox who, so far, is best known for her role as Officer Bello on a couple of episodes of The Walking Dead during season 5. Not content with fading into obscurity and being the answer to a difficult Walking Dead trivia question years down the road, Amber is one busy woman. With nearly half a dozen projects in postproduction, 2017 looks to be The Year of the Fox.

Gruesome Magazine: What made you want to get into acting?

Amber Dawn Fox: Being on set, at first as something to do for fun, turned into me wanting to make this a full-time career. I fell in love with the industry right away.

GM: How did you get into acting?

ADF: I came across an ad online looking for background extras for a show that filmed here in North Carolina at the time, One Tree Hill. I sent them my information and ended up working as an extra on that show six times. Over the next five years, I submitted and worked as an extra on other productions off and on in my spare time. In 2014, I decided to really go for it and started taking acting classes and auditioning for speaking roles. 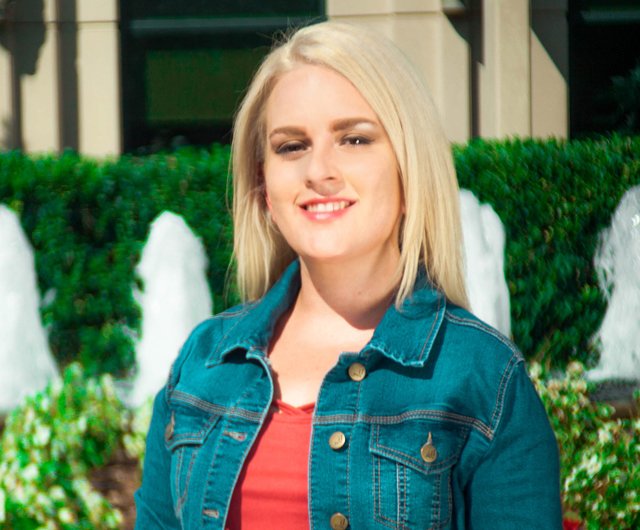 GM: The story of how you ended up as Officer Bello is pretty cool. For those who  don’t know, can you tell us how it came about?

ADF: I have been a fan of The Walking Dead since season one. When I started working as an extra, I ended up down in Georgia a few times on different sets. I kept asking around about how to be an extra on The Walking Dead. It was a dream of mine.  I did not fit the body type to be a walker,  however, so I knew it was a long shot that they would need regular humans very often. Everyone told me the same thing: it was the hardest show to get on. They don’t post ads like most productions do. I found out that a casting company I had worked for a few times already oversaw the show as well, so when I saw them casting extras for a movie with Norman Reedus in it, I figured that was my only chance to work with any of The Walking Dead cast. They never posted for anything that matched my description, so I did what you aren’t really supposed to do and sent them a general submission email. I assumed it would just get deleted, but I sent it anyway. A couple of weeks later I got a text message from a casting director saying that they received my email about the movie, but that I was a fit for a featured police officer on The Walking Dead and asked if I would be interested in that instead. After I agreed, it had to be approved by the director. That is how I ended up as Officer Bello and got to live my dream of working on The Walking Dead, by sending a random email at the right time.

GM: How long were you on set for?

ADF: I worked on The Walking Dead for a total of four  days (two days for each episode I was in). Two of the days were short 8-hour days, the others were 14-16 hours each.

GM: Did you get to hang out with the main cast?

ADF: I did get to chat with them in between takes and such.

GM: What was the whole experience like? Probably a little surreal given how you ended up on the show.

ADF: It was completely surreal. I was stuck between being a fan and being an actress. I stayed professional. It was a great learning experience getting to watch the main cast do their thing; however, I drove home after each episode with a huge grin and might have screamed in excitement to myself a few times!

GM: Is it a safe bet to say you’re a fan of horror movies? What drew you to horror films?

ADF: Yes, I am a horror fan! I have always loved horror films, even as a young child. As far as being drawn to acting in them, they seem to have found me. After I landed the role on The Walking Dead, it seemed most offers that came to me were for horror, sci-fi, or supernatural projects. I love these genres, though, so it is great!

ADF: Besides loving zombies (of course), I also enjoy the slasher movies. Friday the 13th and Scream are some of my favorites. 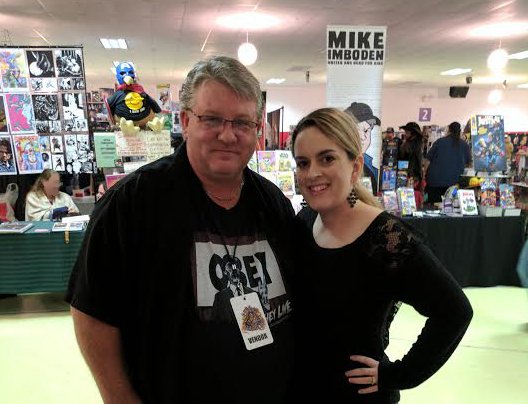 GM: What are you working on right now? What’s the next thing you have coming out that you can tell us a little bit about?

ADF: I’m currently working on a vampire thriller called Edge of Darkness: Full Circle. It is [being] filmed locally in North Carolina and I am having a lot of fun with it. As for releases later in the year, there’s one called Proverbs, which is based on a true story of the Zoloft killer. In it, I play the mother of the main character. There’s also Descending, in which I get to play opposite Alex Vincent (who was Andy in the Child’s Play franchise). It’s funny that you mentioned paranormal movies earlier; The Haunting of Four Points is a comedy/horror about ghost hunting in which I play the lead character, Evie, who is a paranormal investigator. Currently, there is a film I worked on called Tarnished Notes that is out now. It is streaming on Google Play, Amazon, and iTunes. In it, I play Brenda, a friend of the main character.

GM: What is the Amber Dawn Fox dream job?  Any particular director or other actors you’d like to work with?

ADF:  I would love to work with any actor who has been in the industry for a long time. I feel like that would be the ultimate person to learn from. Acting for me is the dream job, so as long as I’m doing that, I feel like I am succeeding.

GM: Now that you’re not just a fan, and instead of paying admission you’re invited as a guest, what’s it like doing conventions?

ADF: Doing conventions has been amazing! I would never have imagined I would be able to travel around as much as I have and meet so many Walking Dead fans. Seeing the love they have for the show and for characters,even smaller ones, has been such a highlight. The schedules of the long three-day conventions can get a little crazy. I don’t tend to get much sleep between the convention, the after-parties, and hanging out with other guests and fans. I enjoy it though!

GM: A lot of interviews end with whimsical “If you could have so-and-so  on a deserted island” type of questions, but that’s sort of clichÃ©. So, here’s something a little different: What is your favorite alcoholic drink?

GM: And your favorite musical act?

ADF: I have a lot of favorites and listen to all types of music, but I am a nineties “boy band” girl, though.

GM: Finally, what is your favorite video game of all time?

GM: Amber, thank you very much for your time. Do you have any appearances coming up or is there anything in particular that you’d like to plug?

If it’s not broke – don’t fix it – right? Director Mike Flanagan and streaming giant Netflix have a match made in heaven and they are looking to keep that horror train on the track and thundering ever forward. After the amazing success of The Haunting Of Hill House, then The Haunting Of Bly Manor, […]

A Second Trailer Takes Us Deeper Into ‘The Mothman Legacy’

It should come as no surprise that I am here to once again herald the release of yet another film by the talented director – and driving force behind Small Town Monsters – Seth Breedlove. I’ve been following the career of this local filmmaker since his first foray into the woods – and his projects […]

I think it’s safe to say that this sequel to the hit 2018 film A Quiet Place is easily one of the most anticipated horror releases this year – and they are making a point of letting you know – you’re only going to see this one in theaters. With the big debut only a […]