The idea of a feature film without any dialog isn’t a new one. It’s been attempted a few times before, with films like The Last Battle (1983), and AKP: Job 27 (2012). Even Mel Brooks gave it a shot with Silent Movie (1976). Director Douglas Schultze is the latest filmmaker to go virtually dialog free with The Dark Below, and while the idea he presents has merit, the manner in which he tells his story is problematic to say the least.

As the film opens, we see a woman named Rachel (Lauren Mae Shafer) being assaulted by Ben (David G.B. Brown). After making sure she’s down, he pours a knockout drug down her throat, dresses her in a wetsuit, drives her onto a frozen lake, cuts a hole in the ice, and drops her into it. He also gives her a tank of air, but it’s nearly empty, so the assumption is that he’s trying to stage an accident – or something. Now while this setup might sound interesting to some of you, director Schultze takes over FOURTEEN MINUTES to stage this setup, and a lot of it is in slow motion to boot. The film itself is just 75 minutes long (Counting just over 5 minutes of end credits), so I can understand his desire to stretch the soup so to speak, but dammit man, this is a really slow film. 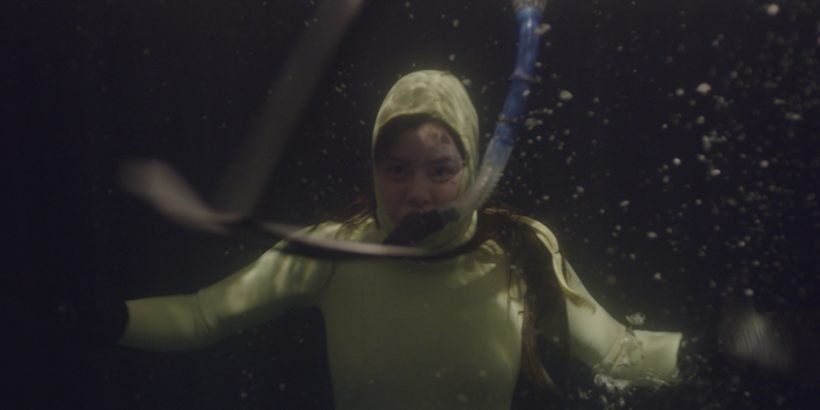 The bulk of the film takes place in Rachel’s head, as she’s struggling to stay alive underwater (Thanks to some fortuitously placed air pockets under the ice). She flashes back to how she first met Ben, their subsequent courtship/marriage, and their daughter. Slowly, Ben’s true nature is revealed to both Rachel, her mother (Veronica Cartwright), and the audience. The problem here is that the proceedings are already inherently slow (This really would be a nice fit for a LIFETIME/HALLMARK movie actually), and the omission of nearly all dialog (Save for 3 words) only slows it down more. Admittedly, I think the cast does a pretty decent job getting their points across sans speaking. with Cartwright especially able to convey a myriad of emotions with just her eyes. Shafer is the main focus of the film, and she proves herself to be more than just a pretty face. Brown also manages to convey a sense of evil that’s pretty effective for the most part.

But The Dark Below is so slow that it just made me sleepy. Director (& co-writer with Jonathan D’Ambrosio) Schultze has aimed way too high by attempting to stretch this laudable, but flimsy story to feature length. It really is better suited for a 20-30 minute short film at best. There are some admirable directorial flourishes to be found here for sure, with the amount of underwater scenes especially impressive. But the reliance on plodding slow motion for a great portion of the film does a lot of damage to the flow of the proceedings, and that flow is already hampered by the omission of dialog. It all adds up to a narrative that plods when it should percolate. 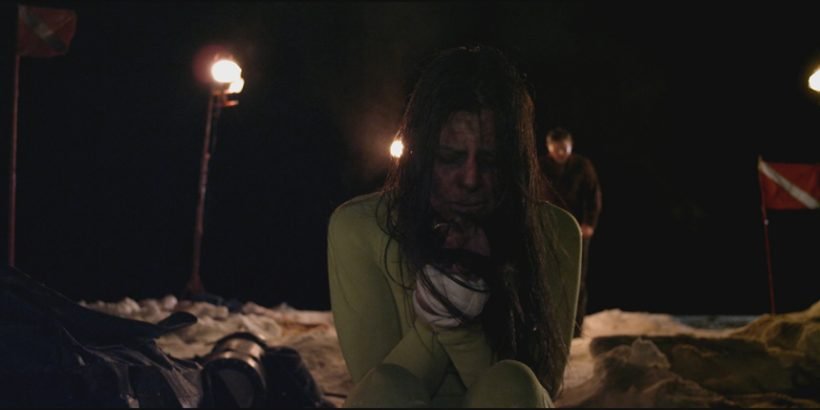 With little to no spoken dialog here, one would think the music would be up to the task of getting the point across in some of the more oblique scenes. David Bateman’s score is up to the task, but it seems like it came from another film. It’s heavily based on vocals that are straight out of operatic choir, and becomes overly bombastic at times when it should take a step back, and let the visuals carry the scene. It’s not a bad score at all, just oddly out of place with the story being told here. It’s more befitting of a religious thriller than a near wordless drama. Additionally, the score seems to be constant in that it doesn’t seem to ever stop. There are a few scenes here that would’ve benefited from some silence, especially considering where most of the film takes place.

It’s quite obvious that Schultze and company have an artistic bend, and a lot of those artistic nuances are present here in The Dark Below. But sometimes you can take what’s meant to be a nifty little thriller with an interesting premise, and spoil it by adding layers of unnecessary artistry. Some things don’t need to be dolled up with slow motion, and a fanciful choral score to be effective. The idea of a woman slowly freezing to death underwater is a pretty potent one if you ask me, and Schultze knew that going in. But it seems like he didn’t have much faith in the premise, and believed that the addition of slow motion, and a way too bombastic score would bolster his story. He was wrong. 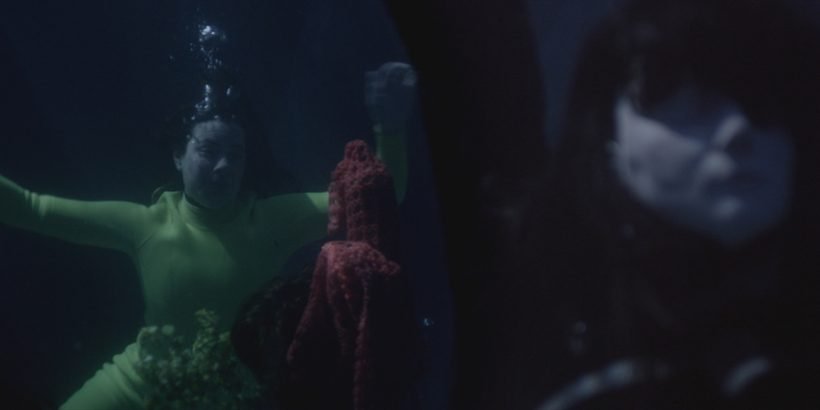 As I said earlier, The Dark Below would’ve been a perfect 30 minute short film. The story is too slight to support a feature length film, and it seems that Schultze knows this – hence the preponderance of slow motion to be found here. Still, the performances are very strong here, and it’s always a delight to see Cartwright in anything as she’s one of the best character actresses working today. See it if you’re interested in how not to stretch a short screenplay into a feature length film. It’s a noble effort, but it fails because of it’s attempts to be more than it actually is. 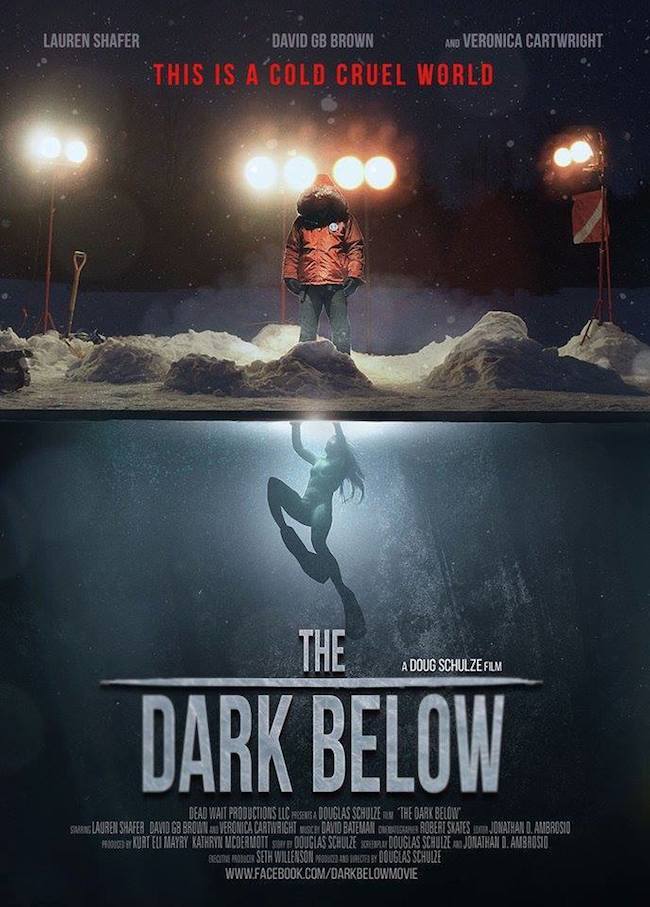 Vanessa returns with another killer review of a supernatural horror film. This time it is Live-Evil (2017) from director Ari Kirschenbaum. The film features Charlene Amoia, Vladimir Kulich, and Tony Todd. Vanessa praises the film’s spirit, tone, and artistry. She dives into the demons and the dead, mentioning Eddie from Iron Maiden along the way. […]

Titties, bimbos and homicidal maniacs, the staples of the 80’s slasher. Hell, they are the staples of most horror movies in general. In Scarred,  however, it is obvious the film makers  are trying to be a throwback homage film to the 80’s slasher – namely. Friday the 13th. They even bring in Ari Lehman, the […]

When I first heard of the new streaming platform Quibi – I honestly had zero interest. My whole life I’ve worked my way up from watching TV on a 12-inch black and white screen when I was a boy to finally having a 60 inch HDR monstrosity in my viewing room so why in the […]

“Oh, good! So you’ve taken to our local specialty. Pickled earthworms in aspic is not to everyone’s taste, I can tell you.” By the way, aspic is a savory jelly made with meat stock, set in a mold, and used to contain pieces of meat, seafood, eggs, or, apparently, earthworms. Sound better now? Join your […]