Grue-Believers, how is you week going thus far? Mine, extremely busy! My day job has been tremendously eventful and my life outside of my day job has been just as hectic. It’s not easy trying to be the world’s strongest H&S Director and horror reviewer. As busy as I am, I never forget about y’all! Unfortunately, I think The Walking Dead does. Sometimes, a show becomes so popular that they go into cruise control and feel they can package up a pile of slop and serve it to their audience. Also, unfortunate, there are super fans willing to accept the slop and savor it which allows said shows to continue putting out more slop. With that said, The Walking Dead has declined with the first three episodes since the break from 12 million to 11.08 and finally this week’s 10.42. Still high numbers, but on the decline. 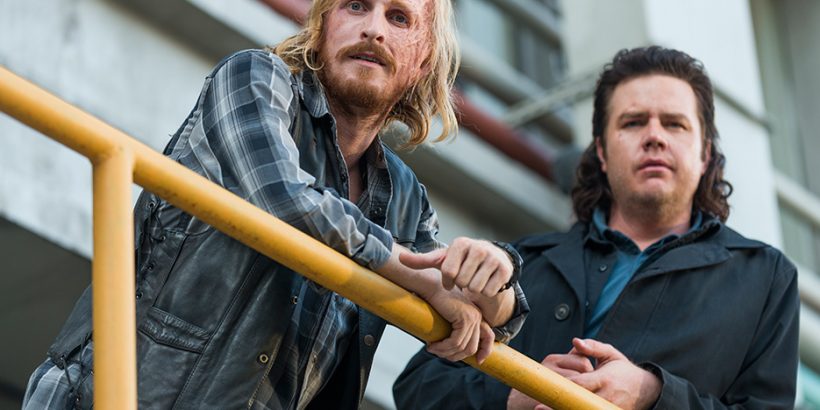 As you know, if you like optimistic, fluffed reviews filled with rainbows and sunshine, the Thug is not your huckleberry. I will try to find something good in the show, but I for certain do not sugar coat it. Heck, I made a producer or two upset with my reviews — but, I’m good with that, perhaps maybe next time they will put something watchable out. This episode of The Walking Dead was a 50/50 split for me. It seems as though the writers are reverting back to the season two soap opera-ish story-lines. Give me angry Rick (Andrew Lincoln), bad ass Carol (Melissa McBride) and psycho Negan (Jeffrey Dean Morgan) and the Thug will be happy and viewership will trend up again. Trust me, I stayed at a Holiday Inn Express last night! 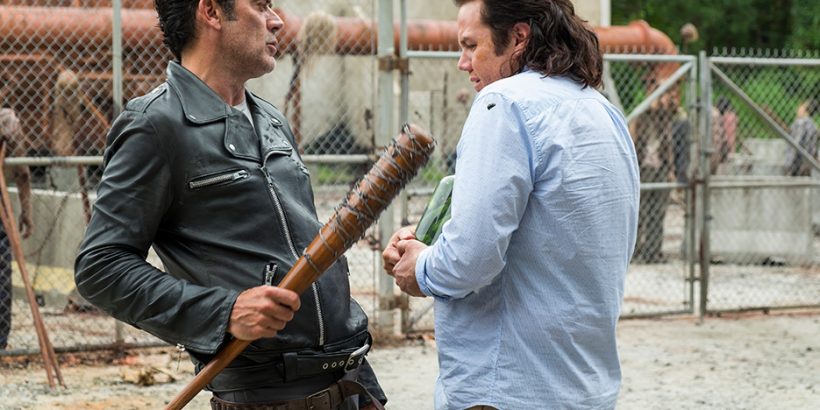 The soap opera storylines continued last night but came with a little twist at the end when Dwight (Austin Amelio) framed Dr. Emmet Carson (Tim Parati). Negan’s reaction was definitely a high point to the episode as he threatened a branding much like Dwight’s but opted just to throw Doc Emmet into the kiln. The means were worth watching if for no other reason to enjoy Morgan’s embrace of his character and his psychotic actions.

The main storyline focused on a character I generally am very neutral on, Eugene (Josh McDermitt) and his interaction with the savior compound and Negan as he is shown the ropes by Laura (Lindsley Register). I have to say Eugene quickly embraces the savior way of life and actually gets some balls which did make me chuckle and actually enjoy his character a bit more. What we don’t know is if he is merely acting the part to survive or is he truly becoming adept to the savior way of life, you thoughts are welcome. I did like when Eugene turns on the stereo in his room and the all too familiar tune of Easy Street plays and he slowly starts rocking and bobbing his head. 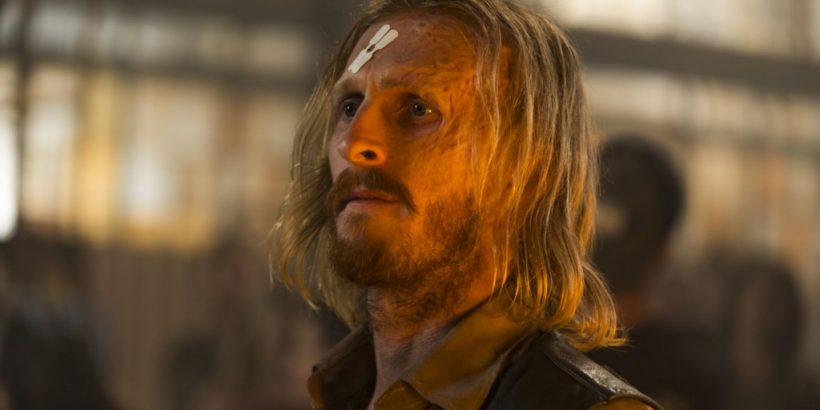 We go back a little bit in the timeline this week as well to when Dwight discovers that Daryl is missing making Negan a bit upset. This action puts Dwight in Daryl’s old spot in the closet of solitude where we get the One Life to Live storyline begins to unfold. This un-needed storyline continues as Dwight goes to he and Sherry’s (Christine Evangelista) place and a somber moment with an almost empty cigarettes, a six pack of beer and wedding rings takes place; give me a freaking break!

As much as I look forward to seeing Negan this week, I have to say Eugene stole the show for me. I especially liked his answer towards the end of the episode when he asks Eugene who he is. Negan only gets out the Who are….and Eugene’s reply is classic: “I’m utterly, completely, stone-cold Negan, I was Negan before I even met you, I just needed to meet you properly to know.” Fantastic!

Hostiles and Calamities was written by David Leslie Johnson and directed by Kari Skogland. Like I stated earlier, the episode was 50/50 for me. Definitely better than the first two episodes of the second half but not up to snuff quite yet, hopefully next week’s episode continues to gain momentum bringing  viewership back up. So writers of the Walking Dead, hear the words that are coming out of my mouth (actually read the keys in which my fingers are stroking): stop with the soap opera garbage, it’s not a weekday afternoon. This is The Walking Dead, let’s gets some walker action, explosions and blood and guts up in this place; it’s time for All Out War!

Ash vs the Evil Dead  has been capable of doing many things that the original  Evil Dead  films really  didn’t touch. An extended narrative, sexual intercourse and, as seen in this week’s “Brujo”, drug implications. Despite  a premise where  a group of teenagers get away to the woods,  The Evil Dead  isn’t a film that […]

Forward momentum seems to be a constant cocktease on  Preacher. In “The Possibilities,” we get total confirmation of a step forward in the story yet at the same time a step backward for our lead. It’s this kind of back and forth that makes me incredibly worried for the future of the series. One can […]

First off, let me apologize to my readers for the late review of this week’s episode of The Walking Dead. Life gets in the way sometimes, but it’s all good. We left off from last week’s episode with a blaring horn garnering the walker’s attention thus throwing a wrench into Rick’s plan. The premiere was […]