Grue-Believers, what is the good word? How is everyone enjoying this winter or lack thereof? It is hitting the sixty degree threshold in northeastern Pennsylvania in the middle of February, which is unheard of. I am definitely liking it in a big way. Unfortunately, the same set of feelings cannot be stated for my thoughts two episodes into the second half of season seven of The Walking Dead. It’s not direction because that is still holding up with Jeffrey January taking the reins this week. Therefore, I will blame it on the writing of Channing Powell. It just seems very lazy to me, almost as though they are mailing it in until the outbreak of all-out war.

In an exchange that was almost the same scene as the last one we saw when the saviors met with the kingdom for their regularly scheduled pick-up we get Richard (Karl Makinen) and Jared (Joshua Mikel) in another pissing contest. We do glean some hope hear as we see Morgan (Lennie James) take some action backed up by his protÃ©gÃ© Benjamin (Logan Miller). I do like Miller’s character as a young man that lost his father too early and is seeking out a father figure in Morgan. The only thing I don’t like, assuming the show holds form, is that Benjamin will likely be a casualty when the action begins. In this same scene, a reference is made to a walker donning a dress. Dianne (Kerry Cahill) dispatches the walker quickly but makes reference twice that her sister had the same dress. I am not sure what the significance was but with the way the writing has been maybe they just needed to fill some space to up the run time in order to squeeze in a few extra commercials to pay for inflated salaries. 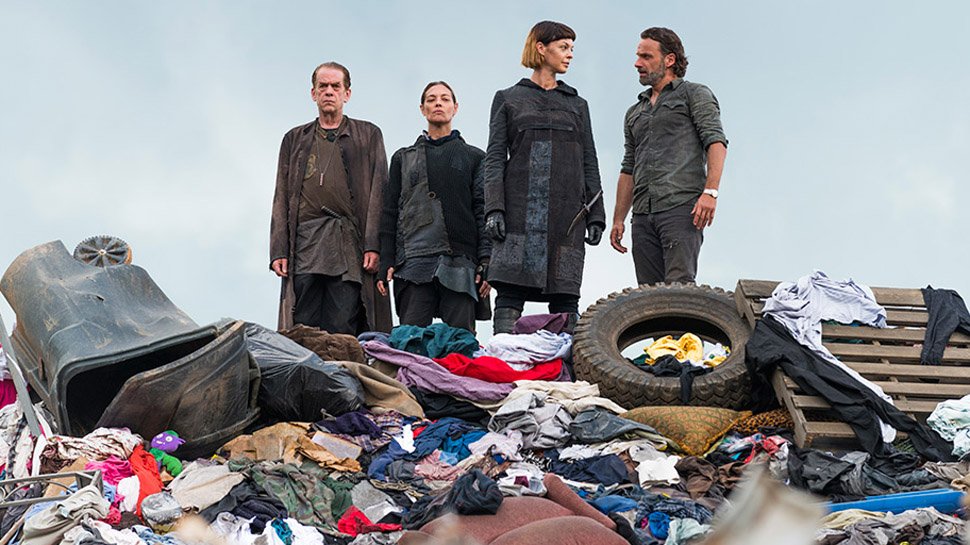 We get the intro to the group that surrounded Rick (Andrew Lincoln) and company last week. We can only assume this to be the group known as The Whisperers from the comics. They are led by a woman named Jadis (Pollyanna McIntosh) and they speak very little. This fact actually worked well for me, since that every time they spoke, I wanted to punch myself in the teeth to numb the pain. Seriously, when writing the script, did Powell consult with a two year old to help him along in writing the dialogue? I know toddlers that are better versed than what this group was portrayed as. I am not quite sure what the show is trying to accomplish but so they understand….Thuggy no likey! 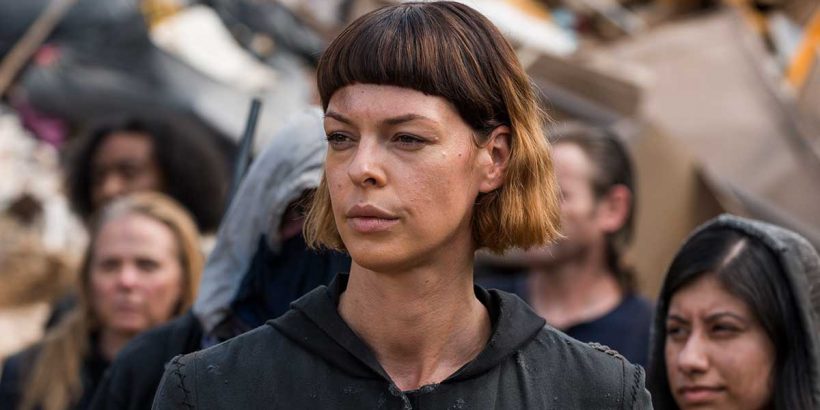 In the mess that was New Best Friends we got a reunion between fan favorite Daryl (Norman Reedus) and Carol (Melissa McBride). Daryl found out about Carol’s fortress of solitude via Richard as he was willing to sacrifice the “woman” that Ezekiel (Khary Payton) has a fondness for. This was in hopes to get the kingdom to join Rick in bringing the fight to Negan (Jeffrey Dean Morgan) and the crew. A scrum ensued after Daryl found out it was Carol and he left a bloodied Richard on the side of the road as he went off to find his long lost friend. From the groups online there was a lot of love for this segment of the show and it was nice; however, it came nowhere close to salvaging the episode. 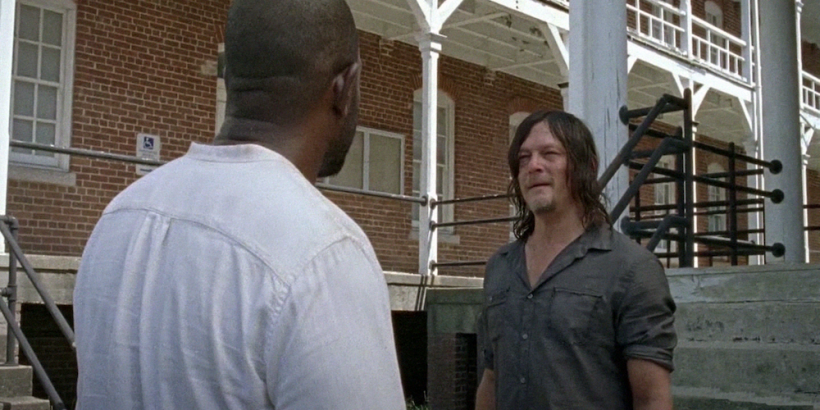 We did get to see the walker with the spikes all over it that they’ve been teasing in the commercials. He is known as Winslow. Rick had to beat Winslow in order for Jadis and the yet to be named group to consider joining them in the impending war and to get back Gabriel. We find out Gabe was kidnapped and forced to bring the food we saw him take last week in the middle of the night. This group was upset that Alexandria had taken the food from the boat they were afraid to get for themselves. Oh, how the plot thickens. Winslow was neat to look at but, again, this scene did not salvage the show either. 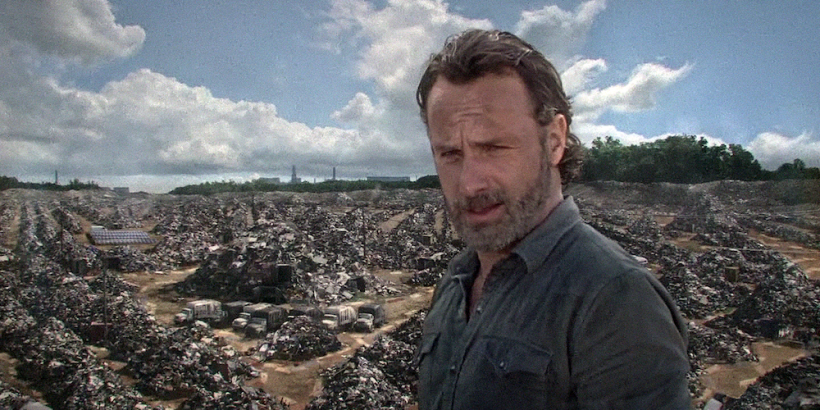 Although not an episode saver, one character I really enjoy in his limited role is that of Jerry (Cooper Andrews). Every time he is on screen he has that genuine smile on his face even in the face of adversity with the state that the world is in. He is happy being Ezekiel’s right hand man but, with his stature, it looks like when it is time to fight he can do some damage — all while keeping that smile on his face. Again, not an episode saver but the few moments he is on screen he makes me laugh. 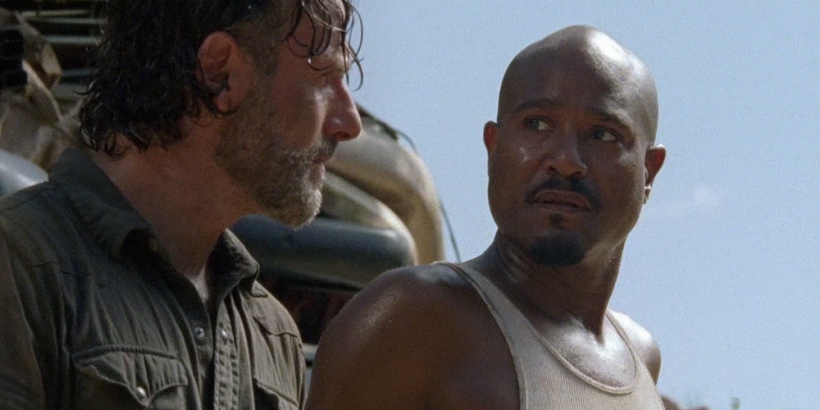 I understand there are die-hard fans out there that no matter what slop the writers give us they will still have a high opinion of the show. I’m sure that I felt that way about some shows I’ve watched but this one does not fall into that category. The previews for next week’s episode show some promise and of course some Negan which was sorely missed in the past two episodes. I will hold out hope that things will get better as the season moves on. For now though, this was a clunker albeit a slightly better one than last week. I don’t think Rick and Jadis will be practicing karate in the garage anytime soon (please tell me you get the reference)! 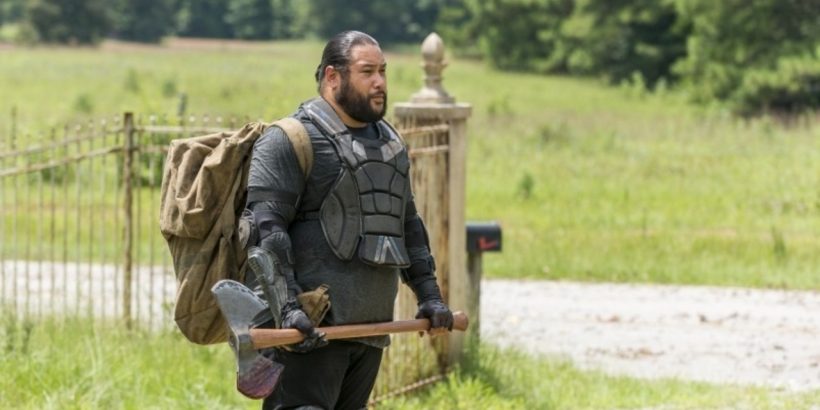 Grue-Believers, how is you week going thus far? Mine, extremely busy! My day job has been tremendously eventful and my life outside of my day job has been just as hectic. It’s not easy trying to be the world’s strongest H&S Director and horror reviewer. As busy as I am, I never forget about y’all! […]

Welcome to  American Gods Fan Podcast,  Episode 6  “A Murder of Gods”. This is the unofficial podcast about the hit Starz television program  American Gods  by fans for fans as brought to you by HorrorNewsTV.com, DocRotten.com, and GruesomeMagazine.com. The Grue-Crew behind the Hannibal Fan Podcast reunites to dive into the latest blood-soaked effort of Bryan […]