When mixing horror with comedy there is a fine line that separates the two that needs to be straddled. Without a solid plan of which way the film should lean, there is a risk of tilting too far to either side and upsetting the balance which inevitably results in a mess of a film. Is it supposed to be a horror-comedy or a comedy-horror? Are we talking Fright Night or Evil Dead 2 or should we expect Scary Movie or Tucker and Dale vs Evil? Unfortunately for writer/director Jeremy Todd Morehead, his first outing, Easter Sunday, falls in the middle which ultimately hurts what could have been an excellent film.

The concept of Easter Sunday is pretty straightforward; a guy named Douglas Fisher (Jason Delgado) goes crazy, dons an Easter Bunny mask and proceeds to axe his wife, young daughter and several other people to death on Easter before being gunned down by Sheriff Arkin (horror vet Robert Z’Dar in his final role). Twenty four years later a group of twenty-somethings accidentally bring the spirit of Fisher back. Inhabiting the body of his son, the spirit of Fisher once again dons his bunny mask, grabs his ax and proceeds to stalk and kill those who brought him back, and if he succeeds before midnight on Easter, he’ll live forever. 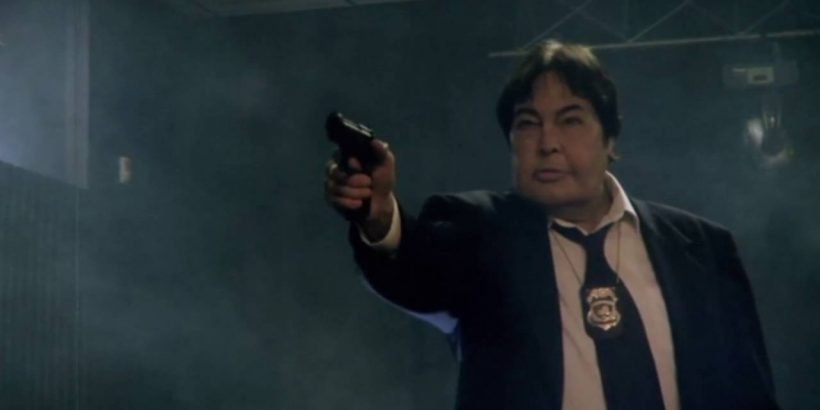 At its core, Easter Sunday is an homage and love letter of sorts to the slasher genre’s roots and heyday of the mid-to-early 80s. This is clearly evident in the trailers for the film and no more so than the “eggcellent” retro style movie poster featuring a decapitated head in an Easter basket. They’ve even added a subtle film grain to everything in post-production which, at times, results in a very effective look, evocative of watching those old slasher films on VHS. Throw in plenty of blood, some nice practical gore effects and a little gratuitous nudity and you’ve got a wonderful throwback to the movies that Morehead and producer Delgado wanted to pay tribute to. We’re also treated to what could be an iconic killer in Fisher’s “Bunnyman” alter ego. His homemade, paper mache bunny mask is creepy as hell when contrasted with the black leather jacket he wears. Add in ominously glowing eyes and you’ve got a pretty scary villain. However, for everything that Easter Sunday gets right, there is an equal amount that goes wrong. While some leeway must be given since those involved had, admittedly, minimal experience in film making, it’s critically and artistically wrong to ignore the faults. If one doesn’t learn from one’s mistakes there is no growth or improvement.

First and foremost is the fine between horror and comedy. Comedy is difficult, ask any comedian. There’s zany comedy, there’s highbrow comedy, there’s toilet humor — the list goes on. What Easter Sunday fails to do is zero in on one type of humor, instead throwing everything into a blender and hoping that the resulting puree is palatable. Satire turns to fart jokes, literally, and “wink, wink, nudge, nudge” humor gives way to zany antics such as a character, who has been spotted by the Bunnyman, running off while hooting and jumping up to click his heels before exiting the scene like a cartoon character. The overacting on the part of come of the cast members pulls things too far into being camp and near parody and the one liners by the Bunnyman are hit or miss, but never consistent in tone, veering from pun filled to just outright vulgar and back again. It’s like Steven Wright and Andrew ‘Dice’ Clay took turns writing material for Freddy Krueger. The fact that the horror elements of the movie are where Easter Sunday hits its stride are often times lost because of the constant shift in tone and the subsequent lack of a comedic style. 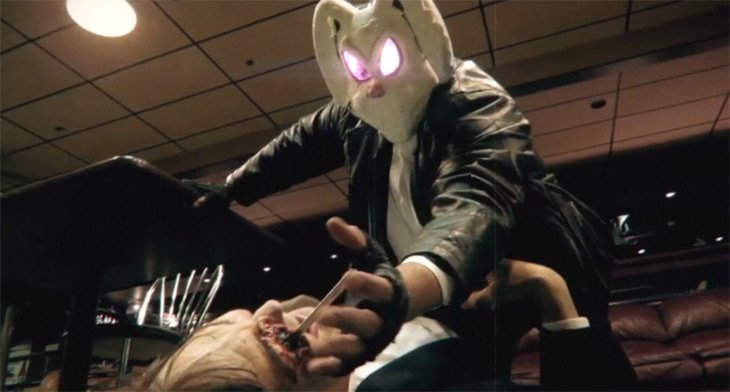 While the concept and plot are great, Morehead could have used a couple sets of extra eyes on the script. One of the most glaring things about the proceedings was when the friends are messing with a spirit board to communicate with the ghost of Douglas Fisher, there is a cut to an unknown man (Ari Lehman — the original Jason in Friday the 13th), who is also summoning Fisher via the same method. So when it appears as though the friends are the ones responsible for bringing the Bunnyman back, it seems fairly clear that it’s this other guy’s handiwork that succeeds. This guy is never mentioned or shown again until much later in the film, at which point it seems like an afterthought. The premise of Fisher purposely being brought back was a good one and the demonic aspect would have explained Bunnyman’s glowing eyes. Perhaps Fisher was possessed by a demon? It’s mentioned a couple of times later, but we may never know if Morehead intended to follow up on this or if it was just an oversight. Additionally, there are production flaws and choices that may leave one scratching their head such as unneeded CGI or continuity errors like magically appearing or changing articles of clothing, but honestly they aren’t worth dwelling on due to the fact that this was, as mentioned, the first production for pretty much everyone involved and that it had a budget of next to nothing.

Easter Sunday has its heart in the right place. When it focuses on the horror, aesthetics and trappings of the 80s slasher films it strives to honor, it does a very admirable job. But as soon as things take a turn towards humor, the lack of focus on comedic style runs the film off the rails. Is it a horror movie with comedic aspects or is it a comedy with horrific undertones? Hopefully, Morehead and producer Delgado improve and the potential that was lost on Easter Sunday is realized with subsequent productions. In the end, though, it’s hard to not like this film despite its flaws. 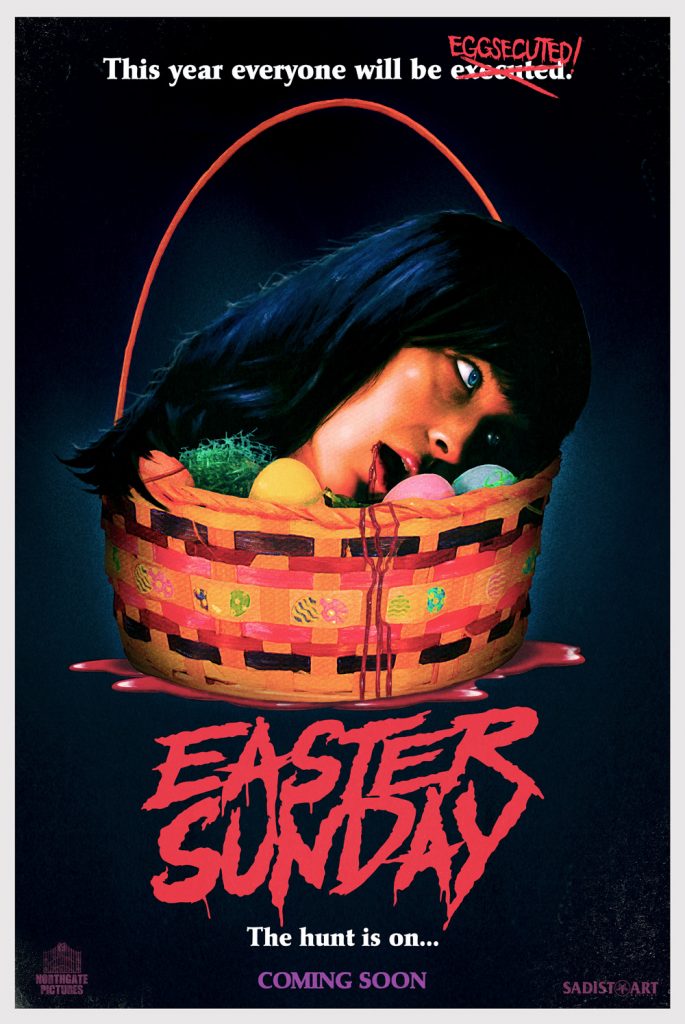 I’ve never been a big follower of the Mumblecore style of film making. For those not familiar, Mumblecore involves low budget, sometimes unprofessional actors speaking in a very naturalistic way, even improvising lines. It often focuses on relationships and dialogue over actual plot.  I mean, I get it. I can appreciate it. It’s just not […]

Found footage films. You either love them or you don’t. That may sound like a bit of an oversimplification, and there are some exceptions that rise above the genre, but watch enough found footage films (a new one seems to get released every couple of days) and you will eventually find yourself on one side […]

The second feature from director Martin (L.A. Slasher) Owen titled Let’s Be Evil mixes horror, evil kids and sci-fi into an interesting, stylistic blend rich with color and focused on character. In many cases, the experimental approach Owen takes with the film works in interesting and fascinating ways. The color pallet is rich. And the […]

On episode 483 of Horror News Radio: The Grue-Crew review… SCREAM (2022). Warning: possible spoilers after the initial impressions! Be sure to subscribe to the Gruesome Magazine YouTube channel to catch all the HNR episodes. This is HORROR NEWS RADIO, the official GRUESOME MAGAZINE podcast. Back with Doc Rotten once again are the scariest, goriest, […]

“It’s elevens. Tens are for booties.” Shouldn’t that go without saying? Join your faithful Grue Crew – Doc Rotten, Chad Hunt, Bill Mulligan, Daphne Monary-Ernsdorff, and Jeff Mohr – as they cozy up to a film director Freddie Francis calls his favorite, which was originally released as Mumsy, Nanny, Sonny & Girly (1970) in the […]

Welcome to HEROES & DROIDS, your guide to pop culture movies and TV! This week we review… THE BOOK OF BOBA FETT (2021, Disney+) Episode 3 On HEROES & DROIDS, we discuss pop culture about Superheroes, Sci-Fi, Disney, and Action. From Marvel to DC, from Star Wars to Star Trek, From James Bond to the […]

“It is as I foretold. Gwangi has killed Carlos, just as he killed his brother Miguel. In a dream, I saw it…the great jaws snapping, the riderless horse. He was doomed and so will you be doomed, ALL OF YOU, unless the evil one is set free!”  Yup. There are definitely great jaws snapping. Join […]

MOST ANTICIPATED POP CULTURE MOVIES OF 2022

Welcome to HEROES & DROIDS, your guide to movies and TV shows about Superheroes, Sci-Fi, Disney, and Action. From Marvel to DC, from Star Wars to Star Trek, From James Bond to the Fast and the Furious, we will review the theatrical films and streaming delights you care about most! This week we take a […]

THE MOST ANTICIPATED HORROR MOVIES OF 2022

On episode 482 of Horror News Radio: The Grue-Crew present their… THE MOST ANTICIPATED HORROR FILMS OF 2022. Be sure to subscribe to the Gruesome Magazine YouTube channel to catch all the HNR episodes. This is HORROR NEWS RADIO, the official GRUESOME MAGAZINE podcast. Back with Doc Rotten once again are the scariest, goriest, bloodiest […]

“All we need is a little order around here.” And Jerry Blake is just the guy to make that happen! Join your faithful Grue-Crew – Chad Hunt, Bill Mulligan, and Jeff Mohr along with Vanessa Thompson –  as they revel in Terry O’Quinn’s stellar performance in The Stepfather (1987). Decades of Horror 1980sEpisode 197 – […]