One Night of Fear is said to be based on a true story.

One Night of Fear opens on a nice sunny day in Ocala National Forest as what looks like Ranger Elmer (Russ Forga) but is later introduced as the caretaker is doing his rounds. In his early moments on film, you get the feeling that he may, in fact, have been named after Elmer Fudd. We get a nice look at the local scenery as Elmer covers his patrol beat. It’s perhaps a tad too long, but it does a nice job of conveying both the size and the sense of isolation of the area our story will be unfolding in.

The opening scene also contains a moment that causes some confusion that could have easily been avoided with improved editing. We watch Elmer in broad daylight as he surveys the land through his binoculars. Dispatch calls him over the radio, advising him of campers. We then cut to our first victim, a late teen, early twenties looking young lass happily curling up in her sleeping bag. Oh, yeah, it’s pitch black outside. Just as she seals herself up in the bag, our film’s killer (Jason Sutton) strides out of the dark, beats the stuffing out of her while she’s still zipped in the bag, and gives another Jason a nod by picking the bag up and wrapping her around the nearest tree. We then cut back to Elmer doing his rounds in broad daylight before getting called about a noise disturbance- a woman screaming -from a cabin where some teens are at. We then cut to the cabin to find our young camper being secured to the wall- and displaying her… um… ample talents -for torture and sexual sadism while screaming her ample lungs out. Once our killer has broken his new toy, he walks her out into the absolutely dark night air to dump her in the woods. We cut back to Elmer stumbling around in broad daylight, leaning up against the tree the killer has dumped the girl’s body next to, and then moving on without a clue to call it in as an unfounded call. 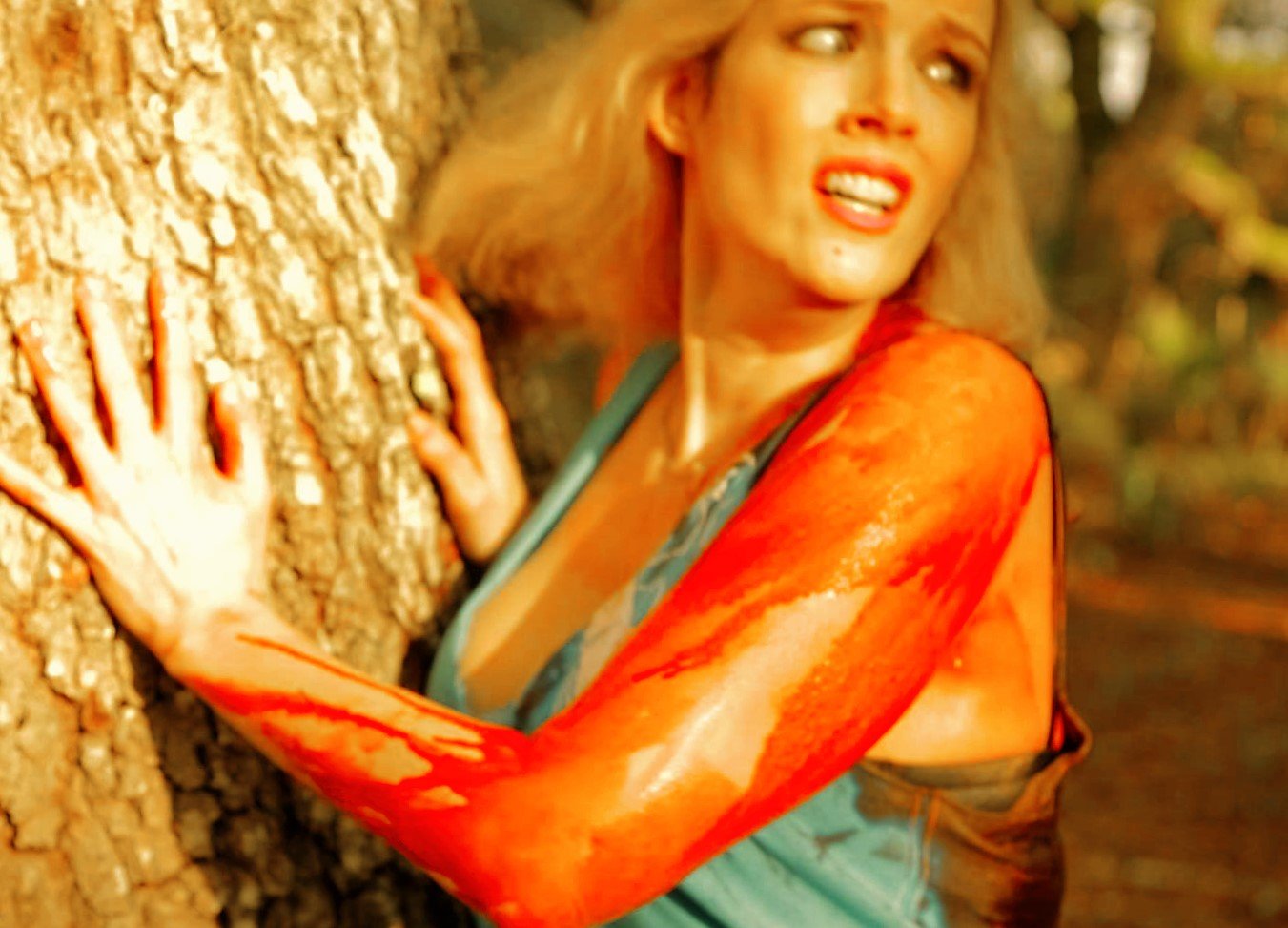 The initially reaction is a moment of ‘WTF?’ about the transitions, wondering if the scene involving the sleeping bag assault is a flashback that Elmer is having. You then think that it was a badly inserted segment showing you a moment from the prior evening because of the call about the noise disturbance and the torture scene. You then just feel a little confused about how the opening scene timeline is playing out.

The idea isn’t a bad one and likely a needed one in an age where streaming video means you might lose an audience to their next option in the queue if you don’t hook them instantly. Give the audience a quick pop, a taste of things to come, and then move into the story. It was just executed in a manner that did it no favors and might have been better served by giving us first the killing and then Elmer doing his rounds and just missing the body without flipping back and forth with the scenes.

We jump instantly to a daylight scene of our still largely unseen killer beheading another camper and sending his lady friend (Jaclyn, played by Suzi Lorraine) running and screaming through the woods. We cut to two other campers (Rob and Katie, played by Jimmy Dempster and Jessica Sonneborn) standing on a road discussing the fact that they haven’t had sex in three months as Jaclyn comes running up to them. She gets enough out to let us know that another member of their crew, a young woman, is still out there. She’s followed in very short order by our killer, and the mad dash is on. 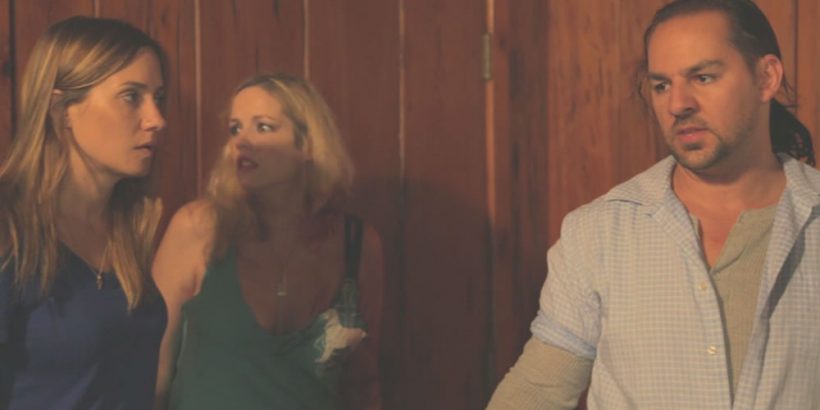 This scene (and other later scenes in the film) are intercut with what look like a flashback to our killer’s childhood. Dad is apparently more than a few cards short of a deck, and his favorite pastime is torturing and killing women in front of his son while acting in an over the top, scene chewing crazy manner that makes Jack Nicholson’s Joker performance look understated.

Our fleeing campers make it to, at the moment, an unoccupied winter home that they presume will provide them some form of protection. This brings Elmer back into the mix as the silent alarm brings him running albeit armed with a broomstick handle rather than his gun. Now that our story has gotten all of its eggs in one basket to break, One Night of Fear sets our hulking, hairy, machete-wielding killer free to break every one them one by one.

Anyone familiar with this particular corner of the slasher genre will feel the story and the characters to be a little paint by number, but younger and newer fans to the genre may find it a more enjoyable romp as a part of a night of indie horror viewing. The acting is about on par with what you expect from an indie film with some performances actually coming off better than what you might expect, the director tries and occasionally succeeds at having moments of interesting visual style, and the gore FX shots are nicely done. 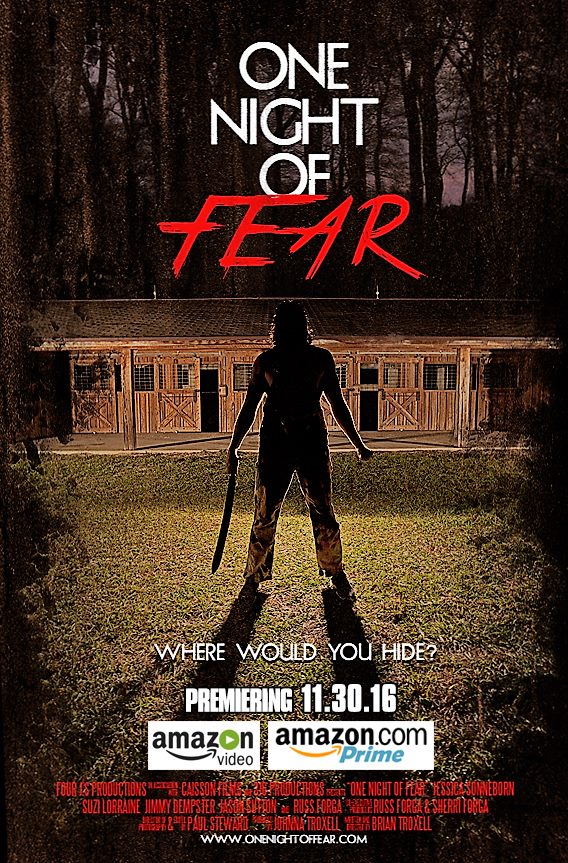 The short runtime (listed as 78 minutes on IMDB and 71 minutes on Amazon streaming) both helps and hinders One Night of Fear. With minimal padding, the film never drags. But, it also contains no real attempts at fleshing out any of the characters until the last few minutes of the film. The character that receives the most attention in the film before the end is Jaclyn, and she’s primarily defined as a character by more or less being the bitch you want to see die in films like this. As such, you really don’t find yourself being attached to any of the characters as they’re killed off, especially Jaclyn.

One Night of Fear displays an ample amount of raw talent and a lot of energy in the production itself. You get the feeling that all involved genuinely wanted to make a solid entry into the indie slasher genre rather than knocking out a cheaply created knock off. While the writer-director team of Brian Troxell and Johnna Troxell certainly swung for the fences with great gusto, they miss as much as they hit with this film. But they also show that they are a creative force that should be watched out for and followed down the road. With a few more films under their belts and a little more growth as creators, they may be hitting all the marks quite nicely in future productions.

One Night of Fear

Writer/director Sean Melia’s debut feature-length film Hank Boyd Is Dead caught me quite pleasantly by surprise with its fantastic cast and its engrossing, quirky horror tale. The film belies its modest budget and rewards viewers with an offbeat slice of independent cinema. Sarah Walsh (Stefanie E. Frame) is seemingly turning things around after the recent […]

It’s not much of a gig for Myles Park (Steve Vanderzee) being the opening act for a Hollywood sell-out trying to return to his stand-up roots to prove he is more than just a guy making bad movies for the money. But it takes place in a real theater and that sure beats telling jokes […]

Writer/director Frank Henenlotter’s Brain Damage (1988) is a thoughtful and powerful exploration of the dangers of drug addiction. It also happens to be a gory horror-comedy featuring a singing, dancing, phallus-shaped, brain-eating monster. A young man awakens one day to find a strange creature somewhat attached to his body. The monster provides him with hits […]