From just the title alone, one cannot be blamed if one imagines The Driller Killer (1979) to simply be a standard late-1970s low-budget grindhouse slasher flick. Granted, it is does indeed deliver on that front, but it is something more. Viewers familiar with the later works of director (and star)  Abel Ferrara (King of New York, Bad Lieutenant) and his long-time collaborator, screenwriter Nicholas St.John, will see elements of their gritty but artful style in this, their mainstream feature debut. In the film, a New York artist lives in a run down apartment building with his two girlfriends. A punk / avant-garde rock band uses one of the other apartments for a practice space, and this triggers psychotic episodes in the artist, wherein he heads out into the street and uses a power drill to dispatch homeless men as well as others. As one would expect from something called The Driller Killer, the film has a gritty and somewhat skeezy grindhouse feel. This said, the movie also has an avant-garde sensibility to it, utilizing surreal and psychedelic imagery to represent the killer’s state of mind. Topping off all of this is a strong rock ‘n’ roll attitude that works to tie it all together. 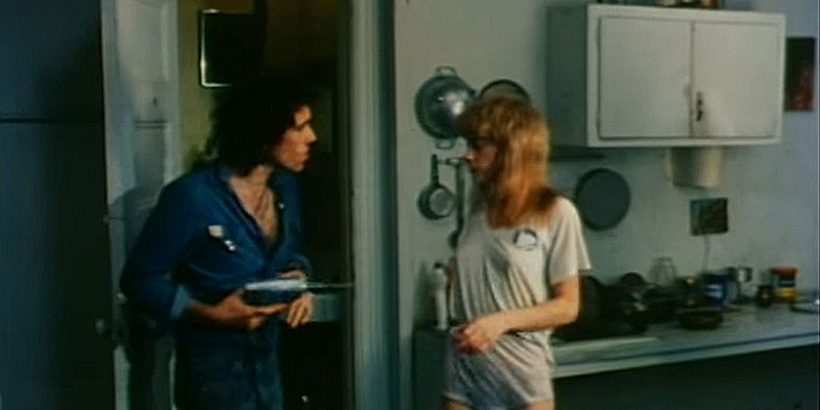 Reno Miller (director Abel Ferrara credited as Jimmy Laine) is the proverbial starving artist. He lives with his girlfriend Carol Slaughter (Carolyn Marz) and her girlfriend Pamela (Baybi Day) in a run-down apartment building in one of the seedier areas of New York City. They cannot afford to pay their bills, and this puts pressure on Reno to finish and sell his current work, a large painting of a buffalo. He is friendly with the scores of homeless men that live in their neighborhood, but he has no desire to end up on the street like them. If he can only finish the painting, then perhaps art dealer Dalton Briggs (Harry Schultz) will purchase it, fixing their financial woes. At the same time, an avant-garde rock band, The Roosters, move into a neighboring apartment and begin to use it as a practice space. Pamela starts gravitating toward the band’s lead singer Tony Coca-Cola (D.A. Metrov as Rhodney Montreal), leading Carol to contemplate leaving both Pamela and Reno for the stability of her ex-husband Stephen (Richard Howorth). The stress from their financial situation, relationship troubles, artistic frustrations, and the sound of the band practice coming through the walls at all hours all finally take their toll on Reno; he has a psychotic break. Hallucinations involving showers of blood, eyeless girlfriends, and giant bunny-headed figures are just the beginning. These episodes evolve into Reno taking a power drill with a battery pack and heading out into the neighborhood to attack the local homeless men and others, and the next day, he appears not to have any memory of these attacks. As the stress grows and continues to bear down upon Reno, he becomes increasingly unstable, leading to even more bloodshed. 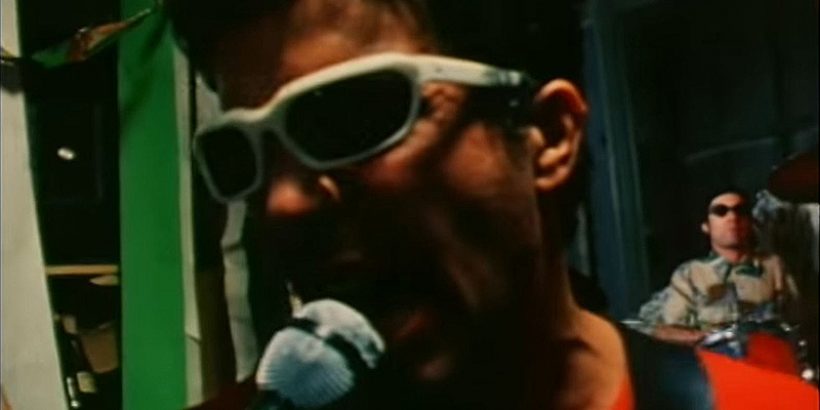 The Driller Killer is first and foremost a full-blown grindhouse film. Film school graduates Abel Ferrara and Nicholas St.John, wanting to move from art films to commercial filmmaking, look to low budget horror, such as The Texas Chainsaw Massacre (1974), as inspiration. As befitting a film called The Driller Killer, the murders are many and bloody, and it earns its place on the notorious British video nasties list of the 1980s.  When one of the characters looks in a basket and finds the organs of one of Reno’s victims, they are clearly mostly cow livers and other butcher shop leftovers, but it works for the film. In addition to blood and gore, one cannot have a grindhouse film without gratuitous nudity, and the filmmakers make sure that area is covered (pun intended), including a kind of skeevy shower love scene between Carol and Pamela. It feels cheap and trashy – and that fits perfectly with the genre. With a micro-budget of $20,000 and filming over the course of a year or two, the film has a cheapness that actually enhances its story. Filming in guerrilla fashion on the streets of New York City, the filmmakers capture the grittiness and grime of the city, creating a strong sense of place. 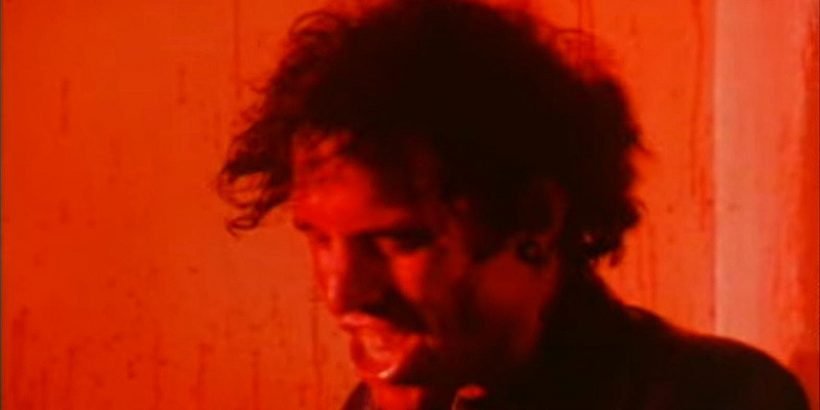 Not content to deliver just a cheaply made horror flick, Ferrara and St.John team up with their cinematographer Ken Kelsch to bring a bit of arthouse sensibility to their grindhouse film. The street scenes have a cinÃ©ma vÃ©ritÃ© feeling, especially the shots involving the actual homeless men living on the streets outside the location. This further drives home the sense of decay and desolation that wears on the characters. When Reno has his hallucinatory episodes, the filmmakers exercise their film school muscle with psychedelic and surreal shots and sequences. Disjointed images of Reno being showered with blood are married with other disturbing images, putting the viewer directly in Reno’s head. Wrapping it all up on an artistic note, the film ends in an understated and slightly ambiguous manner that is extremely effective. 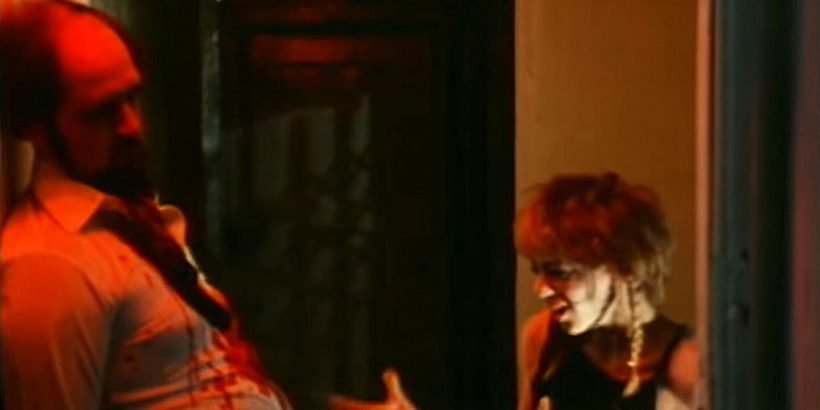 From the very first frame, The Driller Killer wears its rock ‘n’ roll attitude on its sleeve. The opening title card yells in all caps “THIS FILM SHOULD BE PLAYED LOUD”, and the viewer knows it. Making short films for his band is Ferrara’s reason for going into filmmaking in the first place, so it is only reasonable that his first regular feature is heavily infused with rock ‘n’ roll. He includes numerous scenes of The Roosters practicing in the apartment and performing in clubs. These are not just filler sections; they are key to the story and the feel of the film. The whole affair gives off a strong “hey, we are making a movie and we do not care if you like it, because it is OUR movie” vibe – which is very much the same idea behind the punk / avant-garde music movements that inspire it. 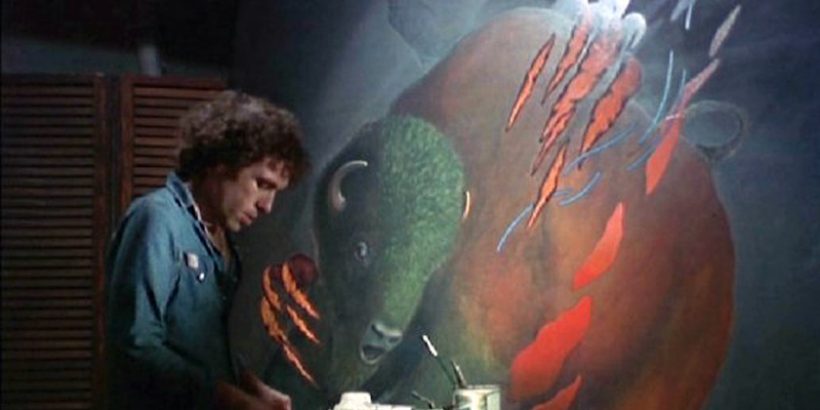 Noted director Abel Ferrara and screenwriter Nicholas St.John’s freshman feature effort, The Driller Killer, is a skillful and enjoyable blend of grindhouse, arthouse, and rock ‘n’ roll. The film has a cheap and dirty feel to it that perfectly compliments the setting and provides a strong sense of place. Ferrara and St.John bring their film school experience and love of avant-garde cinema with them, helping to raise the film above its grindhouse roots. This combination is infused with a rock ‘n’ roll attitude that screams to be played loud. Viewers looking for a gritty grindhouse flick that is more artfully done than others of its ilk should check out The Driller Killer, and they should make sure that, when they do, that it is PLAYED LOUD.

There’s a great scene in the Tim Burton movie Ed Wood where the fledgling director meets with a sleazy Hollywood producer about a new project. “Is there a script,” Wood asks. “(Expletive) no,” the producer says. “But. there’s a poster.” It’s impossible to say if a similar conversation happened when the idea for Clownado first […]

Artsploitation Films have established themselves as quite the force in independent genre cinema in recent years.   Going into their films, there is always reason to be excited if you’re seeking something unconventional and out of the ordinary.   The experimental, art house trappings of their films certainly aren’t for all cinematic tastes, as there […]

A lot of you might not know that I’m a film festival judge, and I’ve been one for a few years now. You might be thinking that watching films for a living is a great gig, but it can be an extremely long  haul. Although I’m currently affiliated with the famed New York City Horror […]