Grue-Believers, how was your Cyber Monday? Did you get all your Christmas shopping done? Me — not so much, but I am a “last minute” kind of shopper. I bring you all gifts every week in the form of my recap/review of The Walking Dead as well as the pain and suffering that sometimes is involved with watching the shows and movies I review. That said, you all are worth it just to put smiles on your faces. Remember last week I told you I thought the trailer looked promising? Well, after watching the episode, I’m not quite sure where I stand. So, as I write this review, I will strive to convince myself one way or the other. 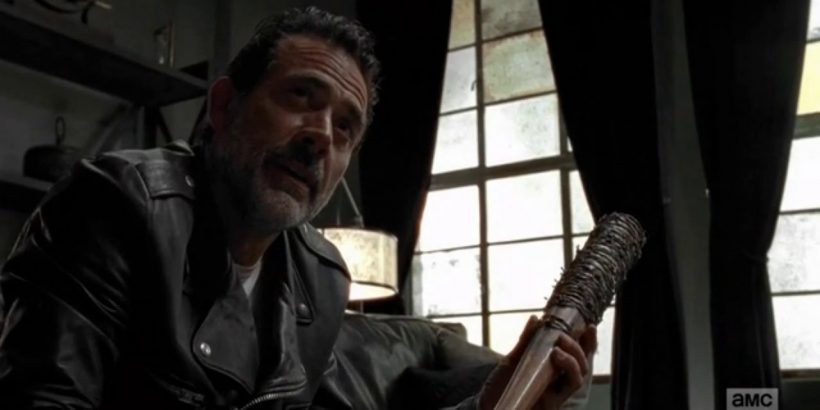 When last we saw Carl (Chandler Riggs) and Jet Li (Tom Payne), they were aboard a truck bound for Negan’s (Jeffery Dean Morgan) lair. For those that are followers of the comic, you know that Carl does try to kill Negan so the assumption going in was that this is the storyline we are going to see. We were correct, sort of. After Carl guns down one of the saviors unloading the truck, he surprises the surrounding group. Negan thinks is precious and it is. This is something you will only see in make believe land, it happens in all comic books as well. Wannabe hero or villain has the chance to accomplish the purpose they showed up to do: gun down their adversary. Easy enough, he is right there. But no, our hero in this case launches into a whiney soliloquy and wastes the precious seconds he had to accomplish the task for which he set out. This is the other thing about the storyline that bothers me. One can clearly see that a lot of Negan’s own followers hate him yet no one does anything. It’s not like the guy has super strength or invincibility. For crying out loud he only carries a baseball bat with barbed wire around it. I assure you he doesn’t have super speed to get out of a bullets way or the ability to use Lucille to slug away the bullet. If he is making you that miserable ala Dwight (Austin Amelio), take him out! 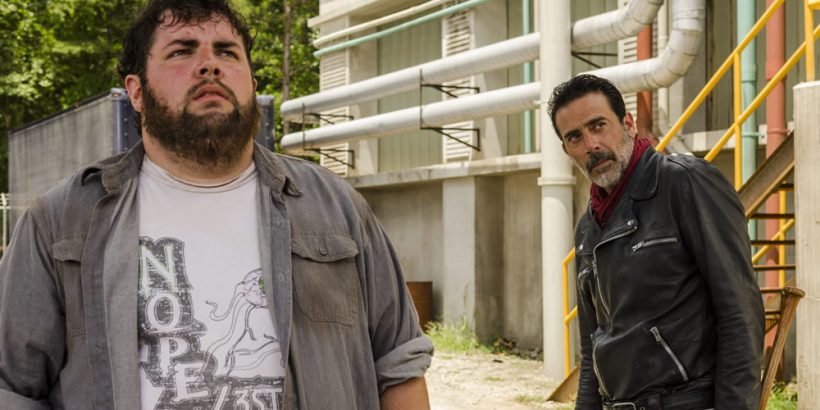 With all that said, I do enjoy the anticipation of what Negan will do or say next. The interaction between Negan and Carl this week is unsettling (to those that are not into the comics) yet entertaining and compassion inducing. Negan first wants to display his prowess among his people so Carl can see firsthand the fear that everyone has of him which I’m sure was to serve as a scare tactic. The back and forth throughout most of the episode showed a bold side of Carl which was both admirable and appealing to the madness that is the character of Negan. Carl is forced to grow up quickly in this world that The Walking Dead universe has created so it’s easy for us as the audience and for the characters to remember that he is still a kid. That side came out when Negan made him sing him a song then chastised him by making fun of his gruesome eye injury after forcing Carl to remove the bandages so he could see it. Carl being brought to tears actually made Negan feel bad to which he offered comfort and I believe aided to his decision to almost take pity on him, well as much pity as Negan offers. Also in this scene was the unnecessary, yet comical, objectification of Lucille as an actual woman. I will not repeat what was said out of respect for women so if you are not sure what I am referring to drop me a message or watch the episode. 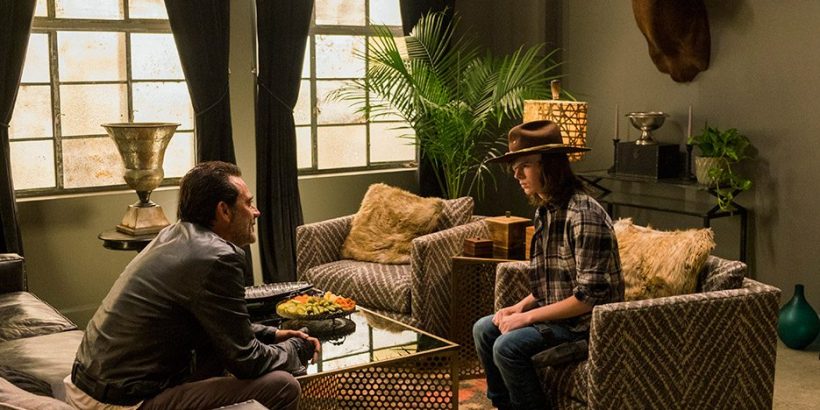 This episode also gives us an up close look into Negan’s womanizing as he introduces Carl to his den of “wives,” encouraging Carl to look at and treat them as objects. Among the wives was a sobbing woman named Amber (Autumn Dial) who “cheated” on him with her real husband. Her husband receives the same treatment Dwight was given involving a hot iron.  The illustrates here how Dwight received his scar during this difficult to watch scene where the character passes out from the searing pain of burning flesh. This scene also served as a reminder to Dwight as to who’s in charge as Negan kisses the woman who used to be Dwight’s wife, Sherry (Christine Evangelista). I believe this will eventually play a part in Dwight’s upcoming alliance with Rick’s (Andrew Lincoln) group.

When Negan and some saviors return to Alexandria with Carl there are some memorable scenes including Negan’s insulting of Olivia (Ann Mahoney) followed by his offer to sleep with her as part of his apology. In slick Negan fashion he states he’s 50% more turned on after being slapped by her. In either the sweetest or most unsettling scene that was saved for last, Negan and Carl sit on rockers on the porch and Negan is rocking Judith and gives her a kiss on the forehead. I’m not sure if this is showing a softer side of Negan or if it is a more calculated move to establish that he can and will do what he wants, my guess would be the latter as he is just daring Rick and the others to make a move. 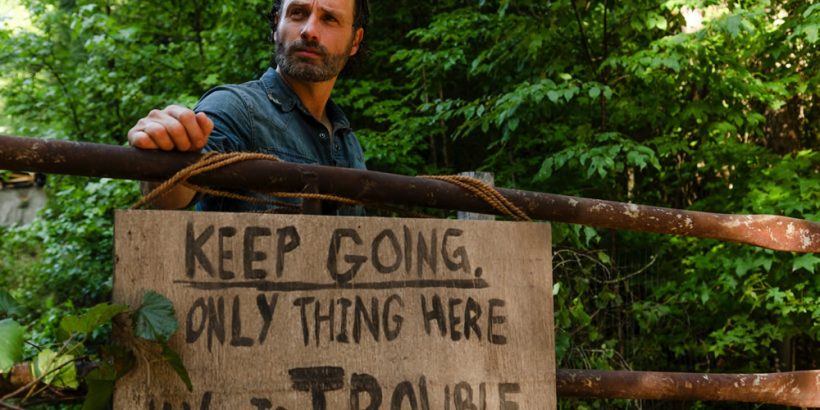 This episode is light in action but heavy in psychological warfare. There is other side storylines that serve as filler such as Michonne’s (Danai Gurira) holding a female savior at gunpoint and demanding to be taken to Negan. We also get Spencer (Austin Nichols) feeling disdain for Rick over the loss of his mother and jealousy over his Rick’s standing. Gabriel (Seth Gilliam)  reacts strongly in opposition to Spencer’s hatred of Rick.  I am liking Gabriel  more and more. The other storyline that really goes nowhere exciting is Rick and Aaron (Ross Marquand) in search of supplies. Although these three small storylines do not serve much of a purpose to Sing Me a Song, I believe they are building towards something bigger. Perhaps more deaths and some double crossing…we shall see. This episode is definitely a step back in the right direction and contains  scenes that made me cringe as well as laugh out loud.

The Walking Dead Season 7  Episode 7  “Sing Me a Song”

Ash vs Evil Dead  loves to experiment with the reality our characters perceive. It’s something Craig DiGregorio and his team of writers have carried over from Sam Raimi’s style in the original films. With “Delusion” though, it’s a whole different ball game. The context of “Delusion” is one I was honestly dreading when I heard […]

We’ve reached the end folks. Well, the end for now anyway. After ten episodes,  Preacher  Season 1 has completed its run. The series started on tough terrain, with meandering based around far lesser versions of the characters we have now. Then, we slowly but surely got a closer thematic adaptation of the source material. Still, […]

Well, it came and went, that moment Walking Dead fans around the world have been waiting for; the season eight premiere.   This past week social media and television alike were inundated with gentle reminders that AMC’s crown jewel was making its way back.   The Walking Dead is entering its eighth season with mixed […]