2012 saw the release of a horror anthology called V/H/S, and it led off with a segment called “Amateur Night”. In it, a group of drunks are in search of some sleazy sex  and think they’ve hit pay dirt with a peculiar looking woman they’ve picked up. Of course, things don’t go too well for them because the woman they’ve selected is actually a winged harpy – a very hungry winged harpy. Although it wasn’t the strongest segment of the film, scriptwriters Ben Collins and Luke Piotrowski took the bull by the horns and somehow managed to flesh out a wafer-thin story and turn it into a full-fledged feature script out of it. And so, SiREN was born. 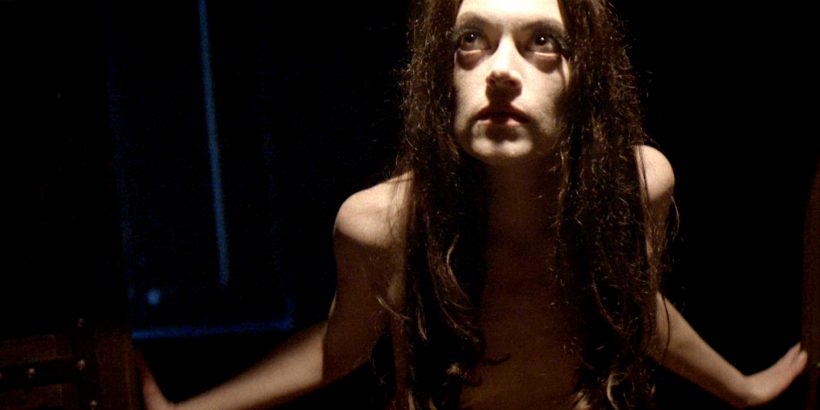 In SiREN (why it is spelled like this is a mystery to me), four friends, Jonah (Chase Williamson), Mac (Michael Aaron Milligan), Rand (Hayes Mercure) & Eliot (Randy McDowall) are celebrating Jonah’s last few days as a single man by taking him out on a drug and liquor fueled bacchanal, which will (hopefully) end up at a cathouse where the women are cheap and the booze even cheaper. They end up at a place called 50 North/40 West, which looks like a fairly dilapidated house on the outside, but is straight out of “Eyes Wide Shut-ville” on the inside. Hallways lined with strippers, bouncers, candles and naked people doing stuff to each other greet the boys – and they love it! Jonah is certain to have a great time here, isn’t he? 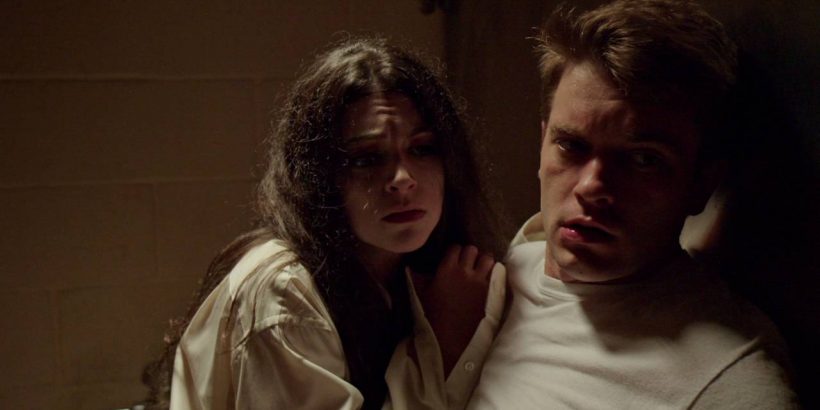 Once settled, the boys meet Mr. Nyx (Justin Welborn), the owner of the club. And after some small talk, Mr. Nyx presents the guys with an odd proposal. In exchange for some memories from his friends subconscious, Nyx will give Jonah some alone time with Lily (Hannah Fierman), a seductive looking young lady. Nyx promises Jonah an experience he’ll never forget, and after some give and take between everyone, the guys find themselves branded with a strange symbol, and Jonah gets put into a trance by a song Lily sings to him from behind a locked door. Once Jonah comes out of his trance, he once again notices the lock on the door keeping Lily captive  and decides he needs to rescue her. So he enlists Rand to help him set Lily free, while Mac and Eliot put gas in their car. But once they set Lily free and make their escape, they realize that she isn’t exactly what she appears to be. I called her a “Winged Harpy” earlier in this review, but we’re never really told exactly what Lily is. What we do know is that she’s decided that Jonah would be a fine person for her to mate with. And if anyone wants to get in her way, they’ll soon regret that choice. Making matters even worse, the boys also have to deal with Mr. Nyx, who’s none too happy with the boys for absconding with his “property’.

SiREN does a lot of things right. The script takes pains to make the relationship between the four friends very genuine and heartfelt. The back and forth between them felt very honest, as if they really knew each other for years prior to the events of the film, they’re also quite likable to boot. Welborn lends a credible air of menace to Mr. Nyx, but he manages to keep it in check, he doesn’t go crazy chewing up scenery here. Fierman has to perform her role with the added burden of being pretty much naked the entire time, but her unusual looks and movements make Lily a feral force to be reckoned with. She played the same role in “Amateur Night”, and she’s just as good here as she was four years ago. The film also looks really good, cinematographer George Feucht does a nifty job of making the film look dark and foreboding, but never too dark – especially inside the club. SiREN is a Chiller production, and I daresay it is probably the best-looking film they have under their banner right now. 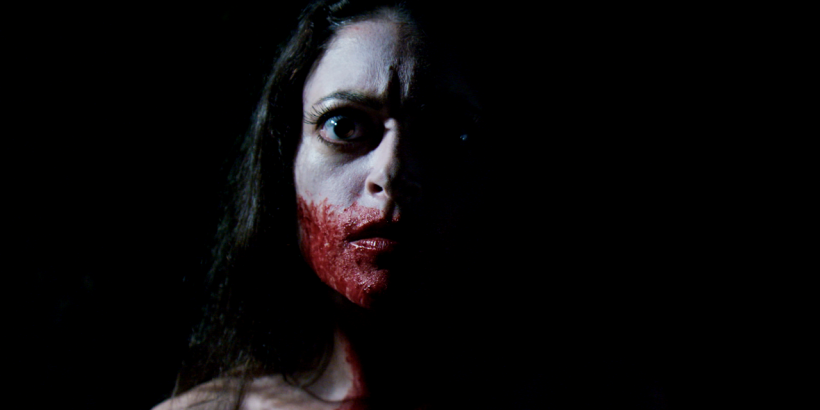 But sadly, SiREN does not do everything right either. As engaging and interesting as the first half is, you would expect the second half to maintain or even build on that momentum. But director Gregg Bishop pretty much squanders everything he so carefully built up in the first half, relying on seemingly endless chase scenes that really don’t go anywhere at all. This is important  because it makes SiREN feel like two different movies that were sewn together with nary a care for how well they would fit together. Additionally, I found myself not caring where the film was going after the first half of the film. Everyone on screen fell into the tropes that the first half of the film so carefully avoided, and it all became quite rote and boring. It all ends up exactly how you might imagine it to end, which is disappointing as well. All of this is too bad  because SiREN had a lot  of potential. 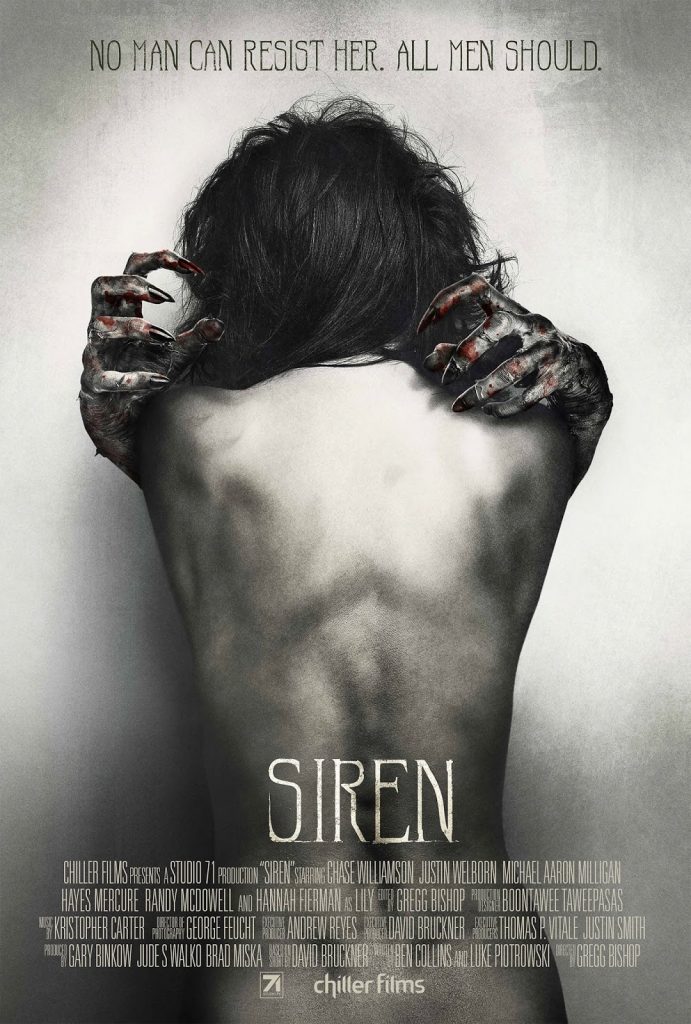 All in all, I found SiREN to be an acceptable time-waster, but nothing more than that. What is sad is that the film’s second half is so disappointing that it overwhelmed, and eventually washed over, the fascinating first half. SiREN had a chance to be something special, but in the long run, it settles on being decidedly ordinary. It is, however, worth a watch if you have seen the original short film “Amateur Night” from V/H/S.

Personal Shopper  is many things. An arthouse film. A showcase for our lead actress. It’s even more than a bit spooky in places. Yet, there’s little to show where exactly it fits in terms of genre. The best context for horror fans would probably be more of a gothic thriller. One where there is most […]

[Review] The Turning Is A Confusing Stinkfest to the Very End

With most of the award season films already released and no real big money box office tent poles scheduled to come out until at least March, movie studios have always treated January and February as the dumping grounds for films they don’t have much confidence in. Maybe they’ve been sitting on a shelf gathering dust […]