After spending hundreds of years hidden away in the depths of Austro-Bavarian folklore, the Krampus is now a staple of holiday horror cinema.   Last year, Michael Dougherty’s Krampus brought yuletide terror back to the masses and introduced unacquainted audiences to the mythology behind the European Christmas demon.   To coincide with the release of that movie, other films featuring the Krampus creature followed, bringing seasonal slaughter in his wake.   One of those films was Robert Conway’s Krampus: The Reckoning, a lacklustre effort with some poor CGI.   Now here we are approaching Christmas once again and Conway is back with a brand-new motion picture dedicated to the anti-Claus for all of us to enjoy — Krampus Unleashed.

The story opens with a group of fortune hunters who, while searching for a lost treasure, unearth a cursed stone which holds the power to awaken something sinister.   Guess what that something sinister is? After centuries of slumber, they awaken the Krampus and it’s thirsty for blood, and it doesn’t take too long before it’s being spilled. 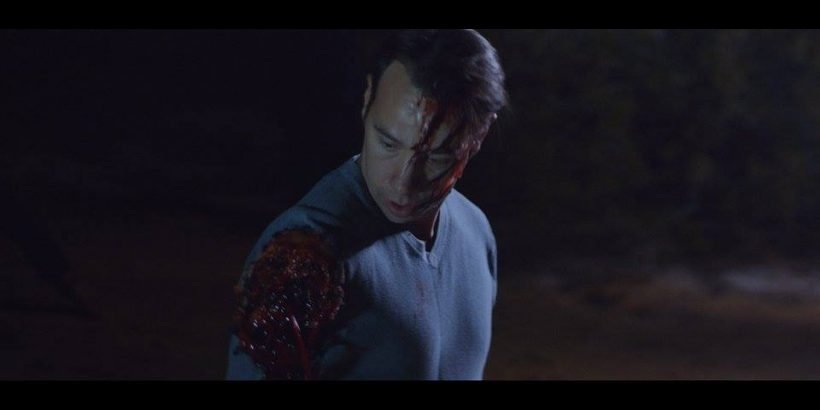 Flash forward to the modern and a family arrive in Arizona to spend Christmas with the in-laws.   The kids Tommy (Bryson Holl) and his older teen sister Fiona (Caroline Lassetter) don’t want to spend their holiday in the Southwest, and their parents Amber (Emily Lynne Aiken) and Will (Tim Sauer) aren’t too keen on the long drive.   But when the rest of the family shows, they decide to cure their boredom by mining for some gold, only to uncover a certain stone that wields the power to summon an unexpected Christmas guest — and he’s not interested in the turkey! 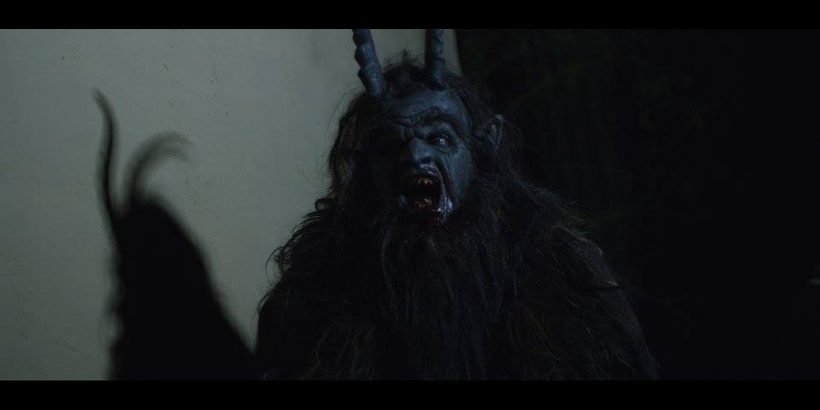 Krampus Unleashed is a mixed bag, but we’ll start with the good.   Thankfully, Conway has opted for a physical monster this time around and the creature suit and make-up looks fantastic.   In a day and age where so many horror fans complain about CGI, many will be pleased to know that Krampus Unleashed is a monster movie which opts for practical FX.   Secondly, there’s enough bloody kills to pad out the running time; no one is going into a film like this expecting anything other than a creature feature, and in that regard it’s perfectly serviceable.   The moments between the carnage aren’t all that interesting, but there is enough monster action to ensure we don’t have to spend that much time with the characters. 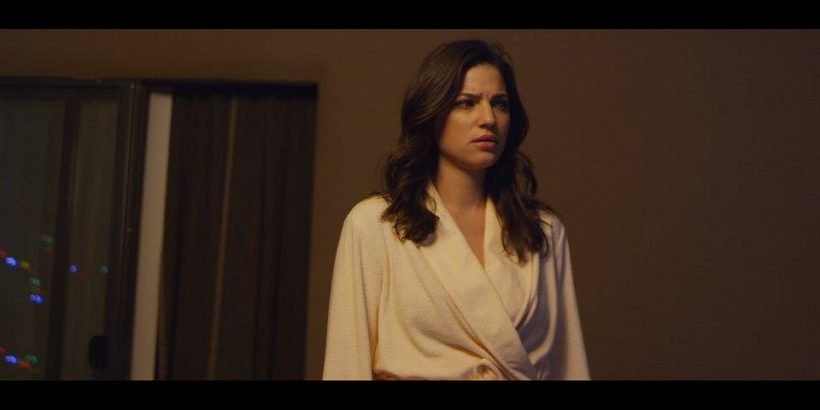 That said, it isn’t without its fair share of problems.   For a start, the acting is also dry for the most part, but the performances are no better or worse than those in most other low-budget horror fare.   The characters are dull and the story is threadbare, but is guised somewhat by what is a competently made film with some excellent cinematography and entertaining carnage.

Additionally, the Arizona setting is a poor choice for a Christmas-themed horror film as much of it is spent in daylight with sun-soaked desert surroundings.   Now I know this criticism sounds like nit-picking, but it doesn’t encapsulate the holiday spirit some might go in expecting — at least not in the traditional sense.   Then again, on the other hand, some might see this element as an unexpected defiance of expectations, which can be a positive when trying to separate a film from others of its kind.

What we get with Krampus Unleashed is a film that is low on story, but serviceable with its splatter.   In terms of low budget horror movies, there are far worse out there, and while I wouldn’t recommend it to anybody who’s looking for the next great holiday horror, it’s definitely for a rental if you’re looking for a passable time killer. 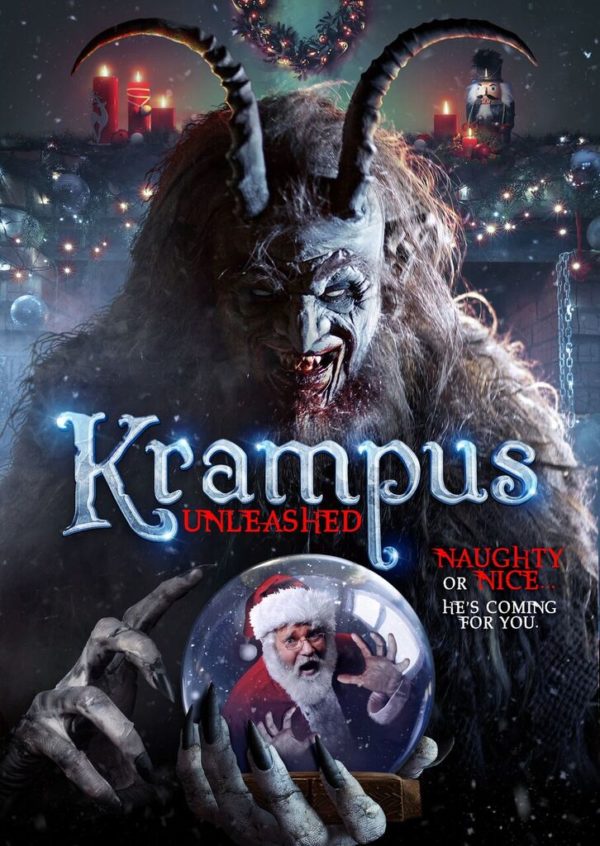 Writer/director Brian Shephard delivers good old-fashioned creepiness in his debut short film, Terror Road. Recalling 1980s horror movies and such television favorites as Monsters and Are You Afraid of the Dark?, the short is both a fun throwback film for adults and a fine “introduction to horror” work for younger audiences. This two-hander sees wife […]

Body horror is a fickle horror sub genre to pull off. In a post-David Cronenberg horror world where the master is too busy doing boring period dramas and nihilist parables, others have tried to irk their way into his waiting throne to limited results. The latest comes from writer/director Danny Perez, coming with a more […]

Outstanding performances from a talented cast, a suspenseful screenplay with sharply written dialogue, and a crackerjack directing effort make Patrick Rea’s new feature film Arbor Demon (formerly titled  Enclosure)  one of the best films currently available on  VOD, after a successful run on the film  festival circuit. For this reviewer, it was also one of […]

“Jill, this is Sergeant Sacker. Listen to me. We’ve traced the call… it’s coming from inside the house.” You’ve all run into that situation, right? Join your faithful Grue Crew – Doc Rotten, Chad Hunt, Bill Mulligan, and Jeff Mohr – as they revisit an urban legend as depicted in When a Stranger Calls (1979). […]

“So you have wounded me. I must grow a new claw. Well, good, for I could do it in a day, but will you grow new legs when I have taken yours from you?” Join this episode’s Grue-Crew – Whitney Collazo, Chad Hunt, Daphne Monary-Ernsdorff, Joseph Perry, and Jeff Mohr – as they try to […]

Welcome to HEROES & DROIDS, your guide to pop culture movies and TV! This week we review… JUNGLE CRUISE (2021, DISNEY) On HEROES & DROIDS, we discuss pop culture about Superheroes, Sci-Fi, Disney, and Action. From Marvel to DC, from Star Wars to Star Trek, From James Bond to the Fast and the Furious, we […]

THE BOY BEHIND THE DOOR (2021, SHUDDER) A Tense Thriller With Friendship At Its Core

Tonight, we review THE BOY BEHIND THE DOOR (2021, SHUDDER). Doc Rotten from Horror News Radio. Jeff Mohr from Decades of Horror: The Classic Era. And Crystal Cleveland, the Livin6Dead6irl from Decades of Horror: 1980s share their thoughts about this week’s awesome collection of streaming horror films. Joining the crew is Horror News Radio co-host, […]