Grue-Believers, how is everyone’s turkey hangover? Well, for those of you who woke up from your tryptophan induced slumber in time to see this week’s episode of The Walking Dead, I’m sure — like me — you wished that you ate a bit more turkey to sleep that extra hour. Without pulling any punches, I will tell you this review will be short. An episode that is this lazily written and really serves no other point then to, perhaps, meet some new characters and explain where Tara (Alanna Masterson) was while she was having real life maternity leave does not deserve my time for writing or your time for reading. I do appreciate you taking the time to come over here to Gruesome Magazine and read this, so I will at least try to be more entertaining than the pile of dung that writer David Leslie Johnson tried to serve us this week.

The Walking Dead likes to take random episodes and concentrate their stories on certain characters and specific arcs. Like a dual edged sword, this method of direction and storytelling cuts both ways. This week, it is us who felt the pain. When your episode is dependent on establishing the whereabouts of a certain person that is in all honesty just a secondary character, it has to have that panache to either be extremely interesting or serve as a canon to shoot said secondary character into the upper echelon. “Swear” is a royal swing and a miss that would make Lucille blush in embarrassment. 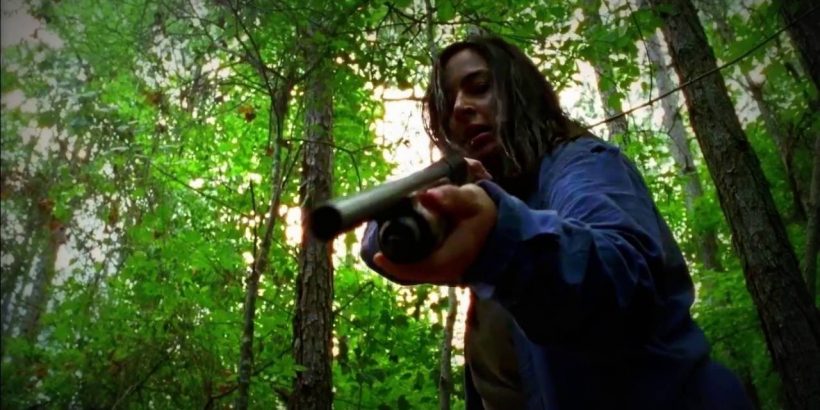 If you remember, Tara and Heath (Corey Hawkins) left the massacre at the satellite station last season in an RV in search of supplies. They have no clue what has transpired in the 2 weeks the show has encompassed since that incident. Sorry, but I am going to go on another rant here. Corey Hawkins was in the critically acclaimed, award winning film Straight Outta Compton playing the role of Dr. Dre. If you have not seen this film, what are you waiting for, it is excellent in every area of execution from the direction of F. Gary Gray to the writing of Andrea Berloff and Jonathan Herman. Back to my point, Hawkins’s portrayal of Dr. Dre was stellar which proves this guy has acting chops. My question is why can’t The Walking Dead staff see that and utilize his talents to put him into a role of prominence that makes us care about his character? Take note writers and directors: you have Mr. Hawkins so you’re half way there; now, give him an arc and maybe you will win back some of the fans you are rapidly losing — especially with these last two episodes which make mediocrity seem like a long anticipated blockbuster.

Back to the slop of this week’s episode, two new characters are introduced early on: Rachel (Mimi Kirkland),; a young ambitious girl probably around 12 years old that really enjoys dispatching walkers, and Cyndie (Sydney Park), a young woman that has taken Rachel under her wing. They happen upon a body lying on the beach and before Rachel puts the spear to it Cyndie stops her realizing it is a person that is still breathing. An argument ensues because Rachel says they are taught to kill everything but Cyndie is trying to cure her of that. Rachel promises not to snitch but refuses to help move Tara. 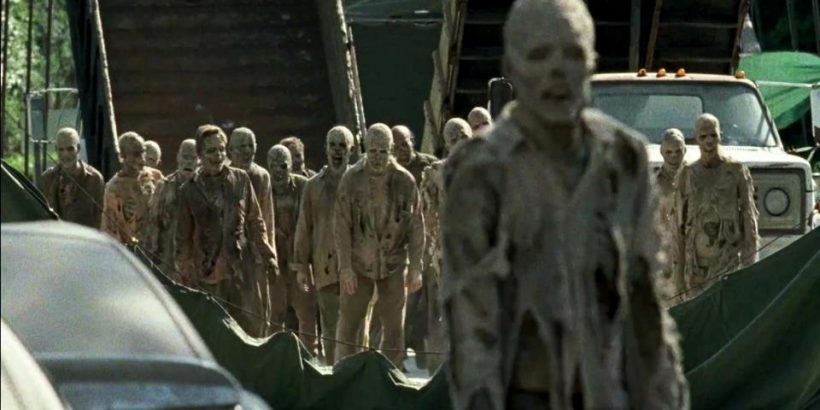 We get flashbacks as to how Tara ended up unconscious on the beach so I will tell you how without dragging it out like the show did. She and Heath were on a bridge savaging when she inadvertently released a bunch of sand walkers (this walker design and scene was a bright spot in this dinge of awfulness). Anyhow, they run out of bullets and get separated as Tara and a bunch of walkers fall off the bridge into the water below.

Back to the present, Cyndie lays two bottles of water, a salted fish and a spear next to Tara who is still faking unconsciousness. Tara covertly follows Cyndie back to a village full of women. As she hides, she hears a clicking sound and all the gals head to a shed and are handed automatic weapons which they begin firing at Tara. Tara knocks one to the ground, taking her gun but sparing her life. The villagers surround Tara  and gives up the weapon while making some terrible jokes in her uncomfortable state while Cyndie intervenes to try and save Tara. 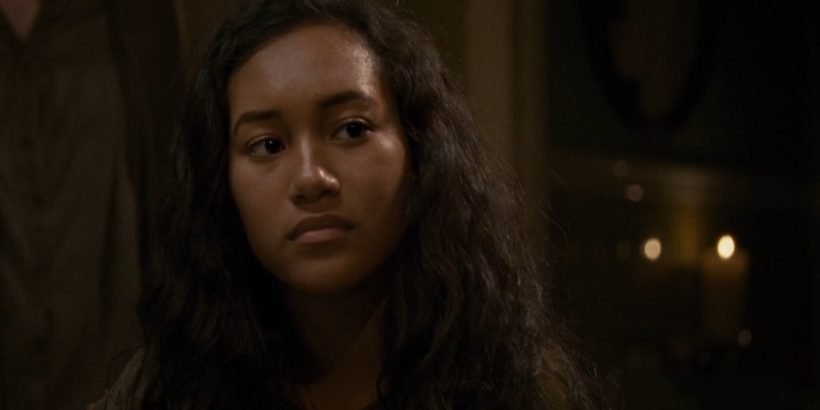 Natania (Deborah May), who is the leader of this all-woman community, tells Cyndie to step away. The villaagers take Tara to a room and chain her to a radiator. She is questioned a bit then taken to a dinner joined by Natania, Cyndie (who is Natania’s granddaughter), Kathy (Nicole Barre’) and Beatrice (Briana Venskus). Over dinner we find out that the reason this is a woman only community is due to the saviors killing all the men and boys over ten years old in the community. They offer Tara safe harbor with them because they do not want to chance her leaving and bringing people back to their community and taking it over; they even offer Heath to stay as well if she finds him. Tara convinces them to let her go find Heath but Natania sends Kathy and Beatrice with her while refusing Cyndie’s request to go.

On their way through the woods, Tara attempts  to escape and gets in a skirmish with Beatrice but is saved by Cyndie who tells Tara to run. Cyndie catches up with Tara and makes her swear to keep their community a secret. Cyndie then helps Tara to get across the bridge where she and Heath separated. Tara gets across while Cyndie meets up with an unhappy Beatrice and Kathy who head back towards the community. Meanwhile Tara sees a walker she thinks may be Heath, it’s not. She finds some clues that Heath may have escaped and she heads back to Alexandria. She is greeted at the gate by a tearful Eugene. Tara goes to the infirmary where Rosita (Christian Serratos) questions her onto who she met and what she saw but Tara keeps here word to Cyndie and replies with “nothing”. 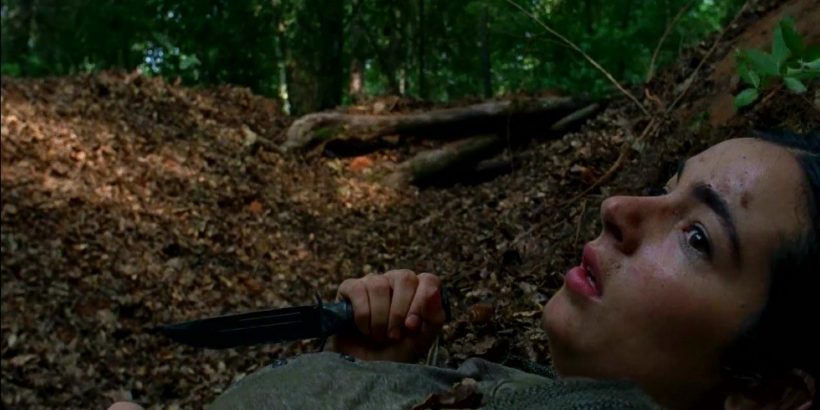 As Simon Cowell would say, “This episode was awful.” We now have back to back episodes that….well…sucked. I normally don’t watch trailers for upcoming episodes but, since “Swear” was so bad, I had to see what we have coming down the pipe. With two episodes left this year I have hopes of good things and from the previews it looks like we may have a turnaround coming. I hope you enjoy my review more than the show because I know how terrible this episode was.

Hey, Grue-Believers, what’s the word? Let me start by apologizing for my lateness. I was attending the Pennsylvania Governor’s Health and Safety conference held in the sweetest place on earth, Hershey, PA. I was finally able to sit down and watch episode 2 of The Walking Dead Season 7 last night. The good thing about […]

You are about to read a Thug review of Fear the Walking Dead Season 2 Episode 1. In doing so, you agree to be spoiled like you’ve never been spoiled before….enjoy. Coming down from the roller coaster ride that was The Walking Dead and now stepping onto the ride known as Fear The Walking Dead. […]

Preacher  decides to throw us for a loop this week with the start of  Sokosha. We start out with a couple of people we haven’t seen before. More specifically, a broke couple (Samantha Beaulieu  and  Damien Moses) being treated by a mysterious man only known as The Technician (James Kyson), who promises them money during […]