Grue-Believers, who is ready for some turkey? Before we stuff our turkeys, make the filling and pumpkin pies on this holiday season in the Staates, we all get to sit down together as Walking Dead fans and watch this week’s episode “Go Getters”. This season has been fairly great so far; but, as I’ve said before, the inevitable “turkey” is coming and, boy, she flopped right down onto the dinner table last night. Sit on down and pass the candied yams as we feast on episode 5 of The Walking Dead season 7.

“Go Getters” is definitely an inappropriate title for this episode. It is the dud episode I was warning you all about. The show did have a bright spot or two; but, for the most part, I was not impressed. I don’t know if it is something with the Hilltop community or what, but, for some reason, when the episode hinges on that community, you can strap yourself in for a trip to Dullsville. I don’t think it is a commentary on the characters or the acting, so I guess I can shift blame to the writing that seems to go into cruise control whenever an episode is centered around this particular location. 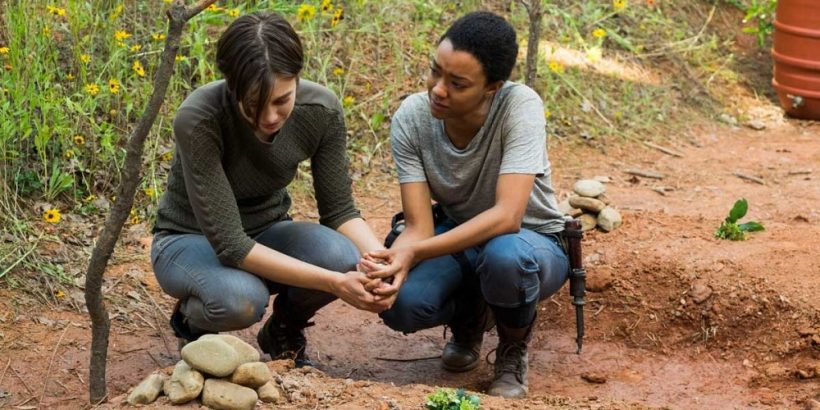 Maggie (Lauren Cohen) wakes up in the office of Dr. Carson (R. Keith Harris) to find out both she and the baby are just fine despite abruptio placentae which is a separation of the placenta from the uterus — see, that the Thug educates as well as reviews. Dr. Carson recommends that Maggie stays at Hilltop to aid in the dullness that goes on there — just kidding (sort of). He wants her to stay to be monitored and taken care of. Sasha (Sonequa Martin-Green) meets up with Maggie and, at her request, takes her to Glenn and Abe’s grave site. Sasha hands Maggie Glenn’s pocket watch, Maggie she lays it on his grave. All Sasha has from Abe was a cigar. “Kung-fu Lou” (Tom Payne) shows up and places flowers on their graves just in time for Gregory (Xander Berkeley) to throw a hissy fit because, at Hilltop, they burn bodies. He is also miffed that Maggie and Sasha being there are going to hurt his stance of playing dumb with the saviors and giving him plausible deniability. He gives them until the next morning to get out of Dodge. I really do not like Gregory and I’m guessing that is the way they want him portrayed, so, if that is their intention, congrats.

Back in Alexandria, Rick (Andrew Lincoln) and Aaron (Ross Marquand) are going on a supply run for the saviors next visit. Carl (Chandler Riggs) refuses to go for some reason. Ok, I’m not going to spend a lot of time on this arc because, well, it doesn’t deserve it. Carl wants to stop Enid (Katelyn Nacon) from going to Hilltop and claims he’s not going to save her anymore. He is lieing,  of course, he hits a Walker with a car, they walk, find roller skate and merrily skate down the road holding hands to some awful music. And they eventually share a first kiss — how sweet. Ugh, that was just as painful to write as it was to watch. 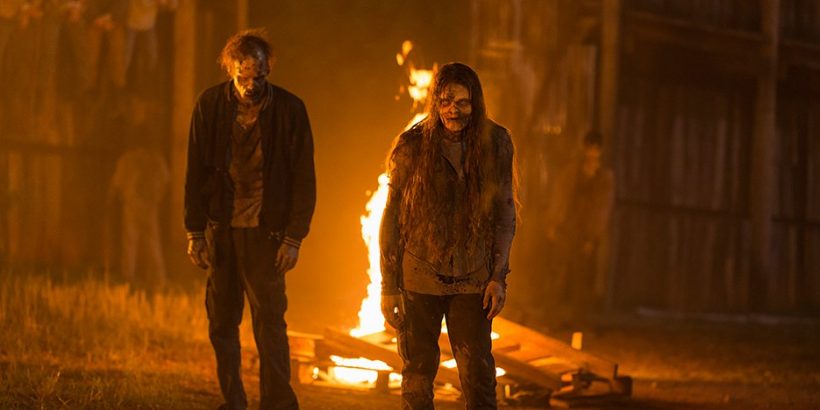 At Hilltop, “Bruce Lee” is hanging with Sasha and Maggie and says he will try to get Gregory to allow them stay there. The Hilltop community is awoken in the middle of the night by loud music. There is an armored car sitting in the middle of the main court yard, blaring loud music as fires burn throughout. Behind the mayhem, walkers shuffle through the open gate. Sasha takes the fight to the walkers as “Chuck Norris” performs some parkour moves to get down to help Sasha and throw some roundhouses. As Sasha tries to get in the car, she finds it caged and locked, secured with the emblem of a middle finger — oh, that Negan is a silly goose. Anyhow, Maggie mounts a tractor and flattens walkers and eventually the car, killing the noise. Gregory is thankful for their help but says they still “gots to go”, although he feels he and Sasha can work something out. She does not reciprocate.

The next morning, Simon (Steven Ogg) and the saviors show up and enter the great house. Gregory plays the part of the weasely ever-gracious host after telling Sasha and Maggie to hide in the closet. Before sending the boys to take half of everything, Simon and Gregory have a one on one in the study about the state of things and the way things are going to be — oh, and they ponder the famous painting Gregory loves. After their chat, Simon asks Gregory if there is anything else he wants to inform him of. Gregory gets a “cat that swallowed the canary” look on his face and says he does as he leads him to the hall closet. To his surprise, he opens it, revealing a case of good scotch. Playing it off, he takes a bottle and offers it to Simon who is actually a gin man, but says Negan will love it. Simon takes the whole case including the one bottle Gregory has in his hand, which he begrudgingly gives up. Simon states that he is going to go ahead and take the credit for the Scotch though. 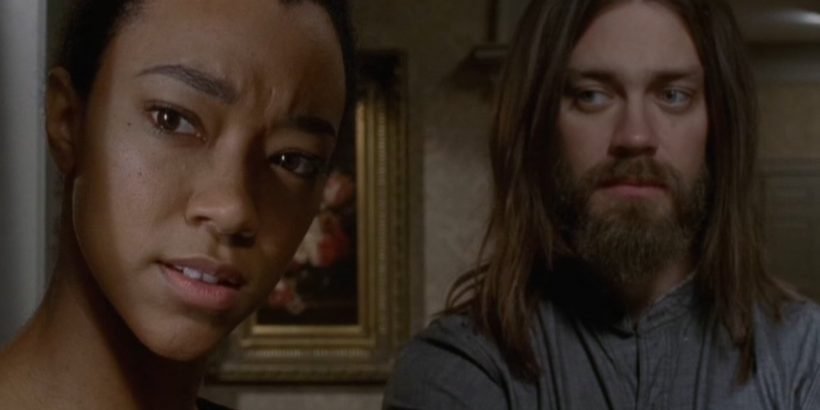 As they are packing up to go,Gregory goes with “Jackie Chan” upstairs to where the girls were really hidden. He argues that he wanted them in the hall closet but “Stephen Chow” states you just said “a closet.” Maggie hits Gregory with a right hook and takes the watch out of his jacket he had taken from Glenn’s grave. “David Carradine” informs Gregory that the girls will be staying and that he is no longer in charge. This is certainly paving the way for Maggie much like the comics. Sasha then asks “Lo Lieh” to follow the saviors and find where Negan lives, he agrees.

Back outside, Maggie discovers Enid sitting at the grave site. They hug and talk. Enid cooks dinner and Maggie gives Enid Glenn’s watch. 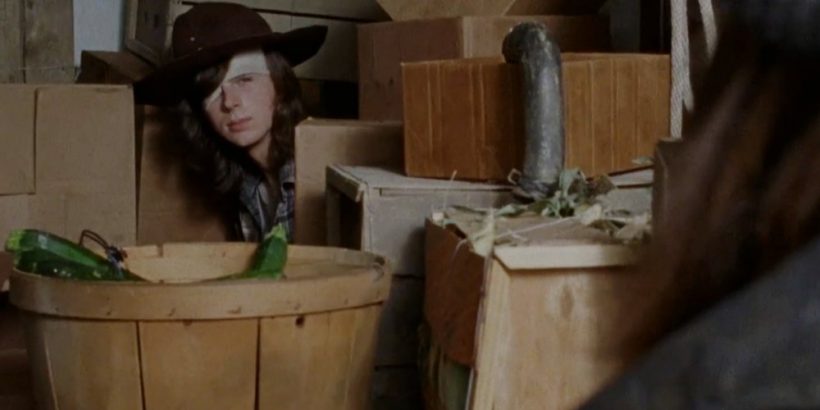 Meanwhile. “David Chaing” covertly hops aboard the last truck leaving for Neganville. He takes a swig from the scotch on board, then begins to dump it out. He hears a familiar voice, apparently Carl had the same idea.
This is the episode I knew was coming. I didn’t know when, just that it was on its way. Hopefully the writers got this out of their system and now we can get to some edge of your seat action and drama again. After watching the previews, I am kind of up in the air about what is going to happen next. We can always hope that they are saving the good stuff for the actual show instead of the trailers.

Grue-Believers, what is the good word? How is everyone enjoying this winter or lack thereof? It is hitting the sixty degree threshold in northeastern Pennsylvania in the middle of February, which is unheard of. I am definitely liking it in a big way. Unfortunately, the same set of feelings cannot be stated for my thoughts […]