In a new film called The Id, middle aged Meredith (Amanda Wyss) still lives at home with her disabled dad (Patrick Peduto). A prisoner in the house she grew up in, Meredith takes care of her father, never leaving the house for even a minute. Her father is a total asshole, with little to no care for Meredith’s needs/desires, he loudly barks out her name if she’s out of the room for more than a few minutes at a time, alternately cursing her, or reciting quotes from the bible. Her mother left the home years earlier, leaving Meredith to shoulder the burden of caring for her father. But Meredith’s self imposed incarceration hasn’t done too much for her mental state, as she’s surrounded herself in the life she used to live as a teen. She still has her faded taffeta high school prom dress, high school yearbooks, faded posters on her wall, the detritus of her youth. Having already resigned herself to living this life, she’s suddenly surprised when an old high school sweetheart calls her out of the blue. Ted (Malcolm Matthews) tells her that he’ll be passing through town on business, and he’d love to reconnect with her if at all possible. Meredith nervously agrees to seeing him, but now she has to tell her domineering father. Knowing that he’ll be displeased, Meredith engages in a war of words with him as she finally begins to fight for her freedom, and her sanity. 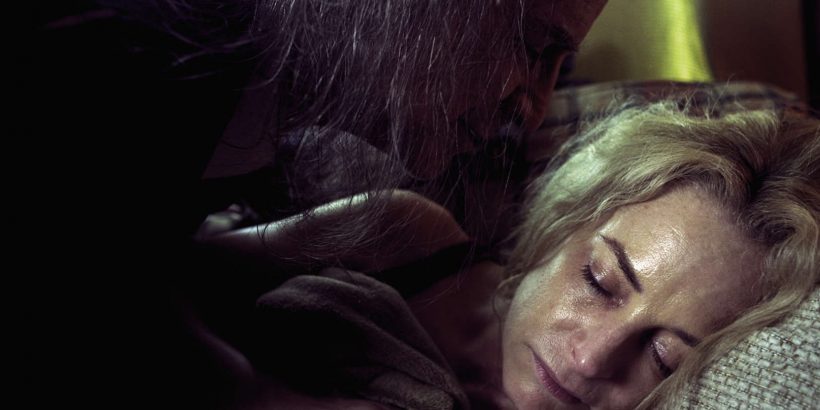 Although I honestly wasn’t expecting much, The Id turned out to be a surprisingly solid effort. Written by Sean H. Stewart, and directed by Thommy Hutson, it’s a well made psychological thriller that doesn’t need buckets of gore to get under your skin. Taking place entirely inside Meredith’s home, it’s a nicely tuned film that doesn’t have too many surprises in it, yet remains fascinating to watch. It’s been awhile since I’ve seen Amanda Wyss in a film (although she’s been very busy on TV), and her performance here is a reminder to all that she’s a very good actress indeed. As the film progresses, she allows herself to fantasize herself in varied situations like murdering her father, or making love to Ted. During these scenes, it becomes fairly obvious that she’s dying to break out of the shell she’s allowed her dad to seal her up inside of, and Wyss does a fantastic job of conveying that message with her acting. Her perpetually furled brow, and downtrodden eyes immediately demand sympathy from the viewer. But her desire to take care of her dad forces her to keep any ideas of having some fun for herself on constant lockdown. Knowing this, her dad mercilessly rides her, slowly breaking down her psyche as he does it. He’s got her to the point where her own psychosis keeps her trapped in the home, and she’s turned it into a prison of her own design as she constantly looks to her past to get her through her future – one day at a time. As her (nameless) dad, Patrick Peduto gives the kind of performance that makes you wanna punch him in the mouth if you ever meet him. Instantly dislikable, he rages, glowers, yells, screams, and does pretty much whatever he can to humiliate his daughter, and to keep her in the home with him. He goes so far as to urinate on himself (after berating her) on purpose, just so she’d have to take his pants off and wash them immediately. His wicked laugh as he wets himself just drips with evil, he’s enjoying every second of the mental torture he’s inflicting upon his daughter. He’s a believably disgusting character – almost too much so. 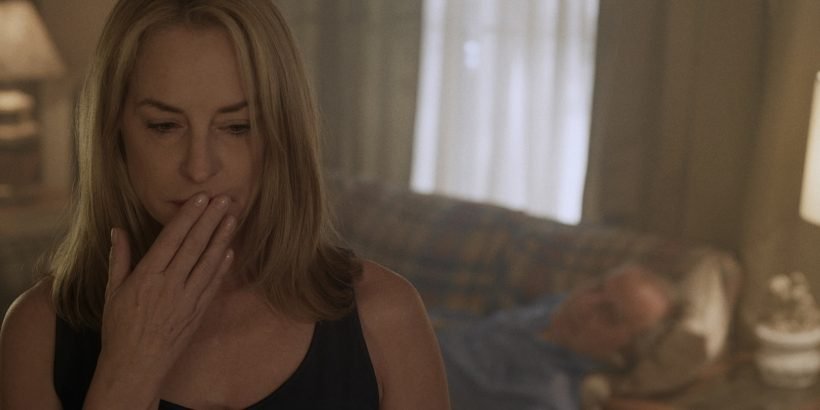 The threadbare supporting cast all do their best in support of Wyss and Peduto, but the character of Tricia (Jayme Grant) seemed a bit out of place at times, as if she had just walked in from a different set. Stewart’s script isn’t filled with a lot of scenes of exposition, the story pretty much tells itself. But the over reliance of flashbacks does tend to slow things down a bit. And as The Id isn’t exactly an action adventure, its pace does begin to sting after awhile. Hutson’s direction is about as straightforward & professional as anyone could want, but he’s responsible for some of the pacing issues as well. The Id only runs about 87 minutes or so, but at times it felt like I was up to hour three of it. Not a dealbreaker because of the film’s actual length, but it’s understandable if some of you look to your watch as the film creeps towards its ending. 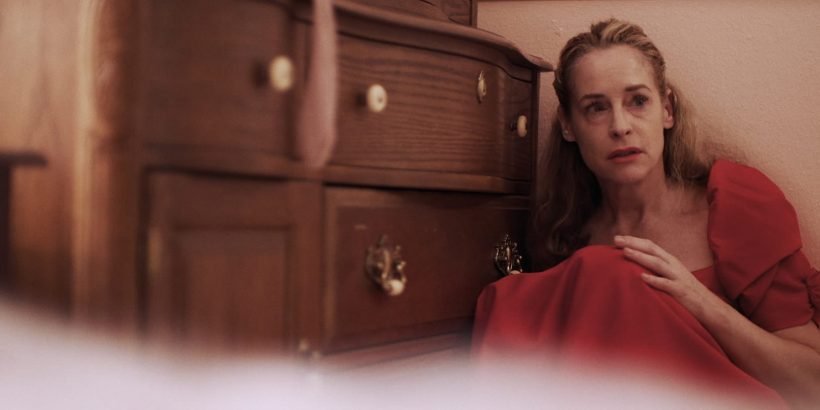 The actual ending itself wasn’t too much of a surprise, and one of the biggest issues I had with the film is the near interminable scene that leads to the ending. In the film, Tricia, fearing something has happened to Tricia’s dad, comes by with two policemen in tow to investigate the situation. The scene felt like it was an hour long at times, but oddly enough, the end of the film came on quite suddenly. It literally just ends, and predictably so. But The Id is one of the better psychological thrillers I’ve seen as of late, with two amazing performances from Wyss and Peduto adding ample support to Stewart’s script, and Hutson’s direction. It’s definitely worth a watch if you’re in the mood for something a little more cerebral than the latest slasher/found footage/monster film. 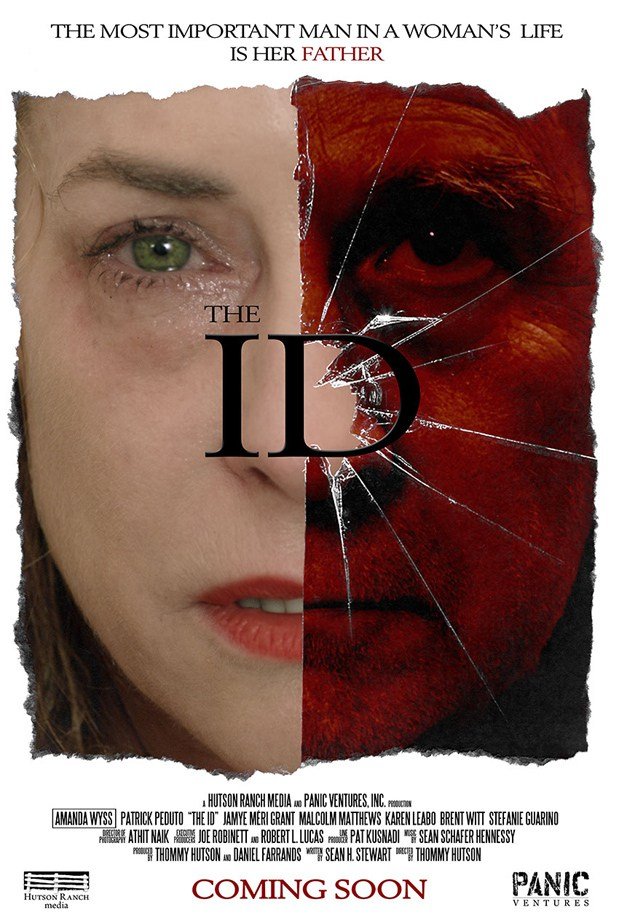 The summer movie arrives early! Kong: Skull Island features a version of the furry king that literally towers above its predecessors, nearly one hundred foot tall. The film looms as large as the King in its scope, ferocity, and action. This is a monster movie in every aspect. It never pretends to be more than […]

In the annals of killer car movies, one film stands out –  The Car (1977) from director Elliot Silverstein  and screenwriters  Dennis Shryack, Michael Butler, and Lane Slate. Sure, Killdozer is older (though, technically, that is about a killer bulldozer, not a car) and John Carpenter‘s version of Stephen King‘s Christine (1983) may be more […]

The Rusalka (AKA The Siren), Freaks, and The Witch: Part 1 — The Subversion (Arrow Video FrightFest Glasgow): Female Monsters and Mutants Abound

Arrow Video FrightFest Glasgow featured three films highlighted by powerful, mysterious female characters for its March 2nd screenings. These films ranged from subtle and understated to violent and gory. The Rusalka (AKA The Siren) Writer/director Perry Blackshear’s The Rusalka (retitled The Siren for its U.K. release), his follow-up to his terrific debut They Look Like […]