Grue-Believers, what’s going on? No safety conferences this week, just continuing to keep the world safe one day at a time – well, part of it anyway. This week The Walking Dead transitioned from “The Well” to “The Cell.” They’re poets and don’t know it. Ok, that was my cheese for the week. Let’s throw on some Collapsible Hearts Club, grab our doggie chow sandwiches, and jump into “The Cell.”

The episode started with a nice flashback as Dwight (Austin Amelio) sits watching VHS tapes of “Who’s the Boss.” You remember that show with Tony Danza, Judith Light and the object of my pre-teen affections Alyssa Milano who is still easy on the eyes? Dwight then makes his way through the compound and watches the Saviors beat a man (Noah Benjamin) to a pulp. After taking an entire loaf of bread, Dwight finds out where the pulp’s living quarters are and raids it as his wife and child helplessly look on. After making his way to the chicken coops for some eggs, Negan (Jeffery Dean Morgan) walks by and everyone kneels (Dwight not looking to thrilled about it). Dwight finally takes his looted supplies and makes himself a sweet sandwich. He sits to eat it as he looks on at a fenced in yard of impaled and chained walkers getting what seems to be herded by two gents in gray sweat suits. 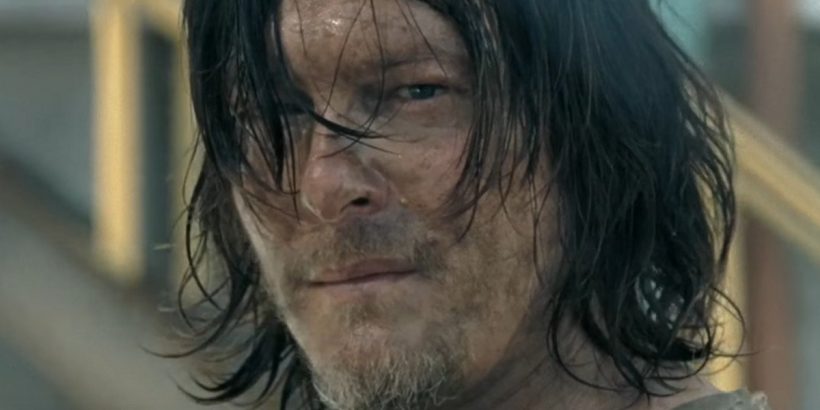 Back from the first commercial break, Dwight throws some dog food on some bread and unlocks a door throwing in the delicacy to our old buddy Daryl (Norman Reedus). Daryl looks a mess as he is kept in this dark den of solitude as an awful song called “Easy Street” by The Collapsible Hearts Club blares on repeat constantly. One round with this song and I was ready to do whatever Negan asked! This scene repeats a few times so we get the idea of the torture the D man is enduring. Dwight finally comes and takes Daryl to the compound doc to have his wound checked. As they enter, we see a familiar face, Sherry (Christine Evangelista) who was with Dwight in last season’s motorcycle stealing episode. She was apparently having a pregnancy exam done with a test laying there. She looks at Dwight and tells him not to worry that it was negative. Don’t worry Daryl lovers, the doc says he will be fine.

As they head back down the hall, Negan comes strolling by and everyone kneels and Dwight has to pull Daryl down too. Negan asks to speak with Dwight privately so Fat Joey (Joshua Hoover) holds Daryl at gunpoint. Dwight takes Daryl outside to show him the walker ranch which has a brand new acquisition, the pulp from earlier in the show. Daryl may be forced to work as a ranch hand if he doesn’t start behaving. 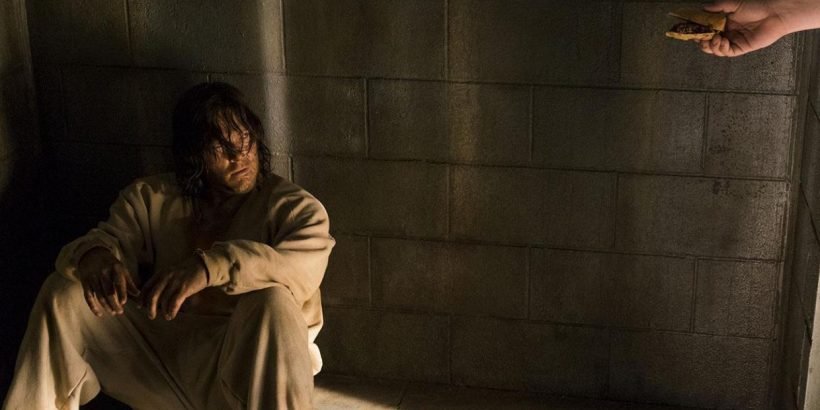 Back in the cell, Fat Joey is now feeding Daryl because Dwight volunteered to go on a mission for Negan. They had a conversation in which Negan offers Dwight a buffet of a word that Trump uses. Dwight refuses and Negan asks him if his unit is in working order since being chomped on by Eugene (Josh McDermitt). Fat Joey doesn’t quite lock the door well so as “Easy Street” continues to assault our auditory senses. Daryl breaks out and runs into Sherry who begs him to go back and start listening. Ignoring her, he makes his way out to a yard with a lot of motorcycles and the Saviors come out and surround him. Negan and Lucile show up and Negan wonders aloud if Daryl is pissing his pants yet. Some threats are made but Negan is impressed that Daryl does not scare easily which elicits respect from Negan. He tells Daryl that Lucille is not impressed and he is lucky she is not thirsty today. Apparently the point is he wants everyone to respond that they are “Negan” when asking “who they are,” thus enforcing his idea of “Negan” being everywhere. Negan leaves and proceeds to let his gang beat up on Daryl.

Dwight’s mission was to go out and find the guy in charge of the egg farm who went rogue because he did not want to deal with Negan’s rules anymore. Dwight almost gets crushed by a falling walker off a bridge but frees himself and catches up with Gordon (Michael Scialabba). He refuses to go back despite Dwight’s urging. Dwight shoots him. 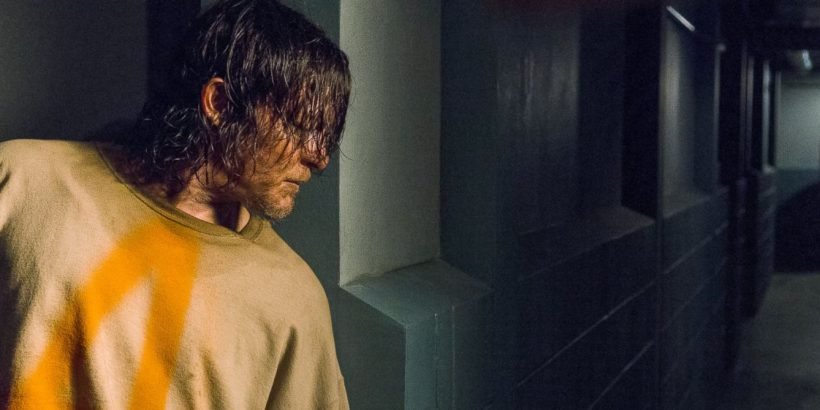 Back at the compound, Dwight and Sherry have an awkward conversation over a cigarette. He just asks “is he treating you well” which she says “yes” to.

Back to being Daryl’s caretaker, he throws him food and a picture of Glenn’s dead body, then listens down the hall as Daryl sobs. He eventually brings Daryl to a furnished room with Negan. Negan tells Daryl it could be his if he straightens up. Negan then tells the story of how Dwight, Sherry and her sister Tina were on a point system. They fell behind due to Tina’ expensive medicine and Negan told Tina she had to marry him. She refused so they stole the meds and ran. Once Tina died, they returned and price had to be paid so Sherry offered herself to be Negan’s wife to save her and Dwight’s lives. But that was not enough so he took a hot iron to Dwight’s face explaining the scars. With all that in mind, Negan asks Daryl who he is. After being forced to ask a second time, Daryl looks him in the eye and says “Daryl” emphatically. 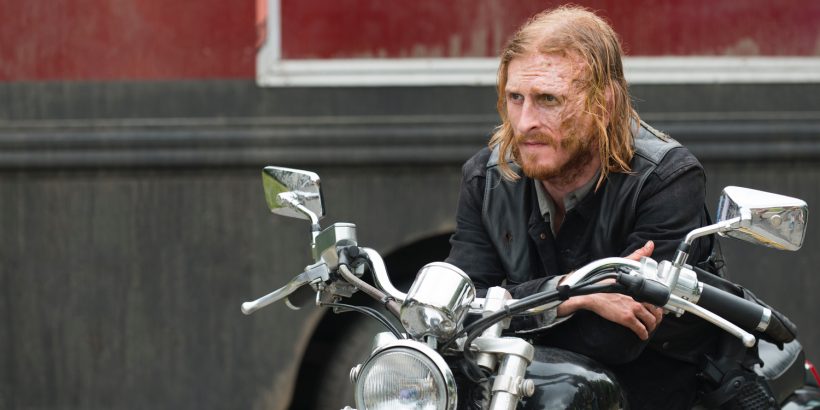 Dwight takes Daryl back to his cell and yells at him, asking him why he won’t give in. Daryl explains to Dwight that it made sense for he and his wife to do what they did to save them, but Daryl does not.

The Cell held a bit more intensity than last week due to Negan’s unpredictability. I do like the comic relief Negan brings to tense situations but at the same time you are just waiting for him to snap. I also like the disdain for Negan you see Dwight trying to hold in. Thirdly, I like the bond that seems to be possibly forming between Daryl and Dwight. I’m interested to see if it comes to fruition. In the comics, we know Dwight is an important character and the show seems to be shaping him up that way too. Just please, oh, please, don’t make me listen to “Easy Street” again! My wife actually dug the song and was playing it for the dogs this morning. UGH!

Another episode of Scream Queens  hits FOX and we are at episode four of this train wreck. Much like that crash that everyone slows down to “rubber neck,” I can’t look away. I’m not quite sure why. The sheer idiocy of the characters is entertaining on some level, Jamie Lee Curtis  is superb as Dean […]

AMC hasn’t been afraid to use explicit gore since The Walking Dead became their highest rated show. Yet, it’s rare that said use of gore has more than a passive affect of killing a zombie or shooting anyone in the head. This week,  Preacher  kicked itself off with a simple yet powerful use of  gore. […]

For the holidays you can’t beat home sweet home. Well, that’s at least what  Ash vs Evil Dead  wants us to get on board for with the penultimate episode of Season 2 “Home Again.” When I heard that this episode was going to feature the group returning to the main setting of the first two […]