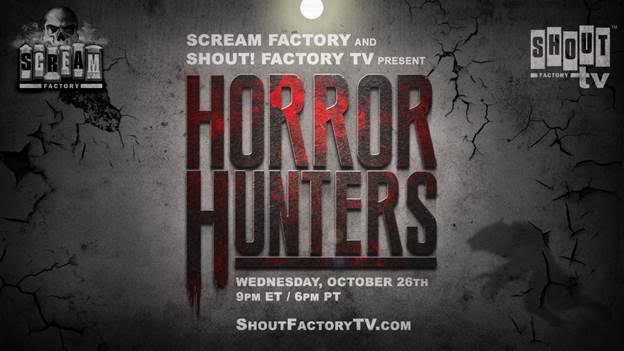 The horror world knows that when they hear the words Scream Factory – good things are near and it’s usually in the form of an amazing Blu-ray release but they are changing it up and taking a turn at bringing us some original programing and I’ve got the low down for you.

The show is called Horror Hunters and damn if it doesn’t sound like a bunch of fun.   The press release breaks it all down!

In Horror Hunters, horror experts Adam Rockoff and Aaron Christensen embark on a journey to discover some of the greatest collections of horror memorabilia in the world.   At each destination, the Horror Hunters offer rare and valuable pieces from their own collections while attempting to trade for the most sought after, one-of-a-kind items they encounter.

In the pilot episode, the Horror Hunters visit Frankenstein uber-collector Phil Meenan and come face-to-face with a working (and dangerous!) Jacob’s Ladder device.   Next, the Horror Hunters travel across Chicago to meet with well-known horror blogger Jon Kitley inside the infamous Kitley’s Krypt, where they propose an epic trade.

Because the show is made for the ultimate horror collector, Horror Hunters viewers will be encouraged to take a short survey to give feedback on the pilot following the live stream. This feedback from fans will guide the future of the show beyond its pilot episode, and each voter will be entered to win a Scream Factory Blu-ray prize package.

So, October 28th is the day you want to remember.   You’ll be able to live stream the pilot episode at 9 PM EST with an encore performance streaming at midnight.   You’ll want to head on over to ShoutFactoryTV.com to take part.   If you miss the premiere – fear not – they’ll be making it available as a VOD title as well.

Late last year we were all excitedly anticipating the release of The Hunt – a joint collaboration between Universal Pictures and Blumhouse – then, a series of horrible mass shootings […]

Every state has its fair share of haunted places. Buildings, graveyards, spooky woods. In New Jersey, there’s a place called Clinton Road and thanks to filmmakers Steve Stanulis and Richard […]