Over the eons, I’ve sat down to watch more than a few horror films. I’ve seen about a gazillion of them, and they’ve run the gamut from A-Z, from bad to good, you name it – I’ve seen it. The latest film from writer/director Bryan Bertino (The Strangers, Mockingbird) is called The Monster, and while it does absolutely nothing in terms of having an especially original story, it weaves tropes of familial drama in with the horror in a way that moved me way beyond any film that’s called The Monster should. And it really features a freaking monster too! 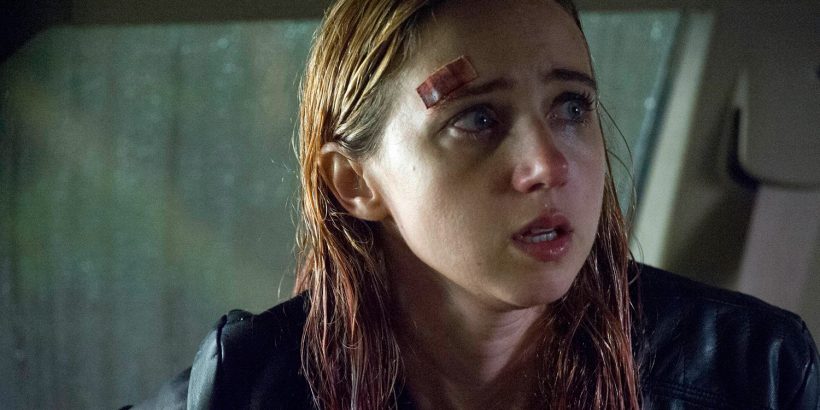 Kathy (Zoe Kazan) is what you might charitably describe as a no good mom. A raging alcoholic and substance abuser, she lives her life from bottle to bottle, fighting with any number of boyfriends who come in and out of both her life and the life of her young daughter, Lizzy (Ella Ballentine). Although she lives with her mother, Lizzy has little to no relationship with her. What little relationship they do manage to muster up between them is both angry and adversarial. Oftentimes, it’s young Lizzy who plays the mom to Kathy’s unruly daughter, and as the film opens, we find Lizzy washing the dishes, and packing for a trip to her father’s home, where she’ll be staying. She then has to wake up her mother who is once again unconscious thanks to whatever bottle she found relief from the night before. The two eventually embark on their long road trip, both of them keeping to themselves during the ride, save for the occasional attempts at small talk from Kathy to her disinterested daughter. 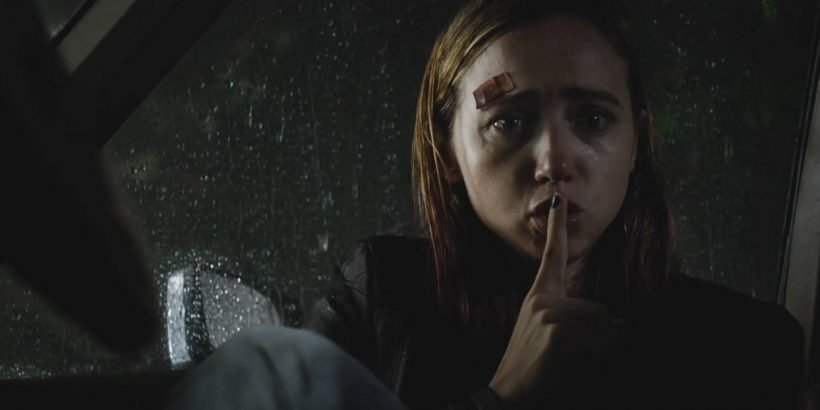 As they drive into the evening in driving rain on a quiet back road, a wolf suddenly appears in front of them. Desperately swerving to avoid hitting it, their car spins wildly out of control, and ends up disabled with a severely damaged front tire. Luckily, neither of them is badly injured (save for a mildly injured wrist, and a cut on the head for Kathy), and while Lizzy manages to call for help, it won’t be there for awhile. So after examining the wolf (and removing what looks like a tooth from its carcass), they go back into their car to wait for help to arrive. But unbeknownst to them, there’s something in the woods watching them, something the wolf was running away from, something that’s very angry, and very hungry. 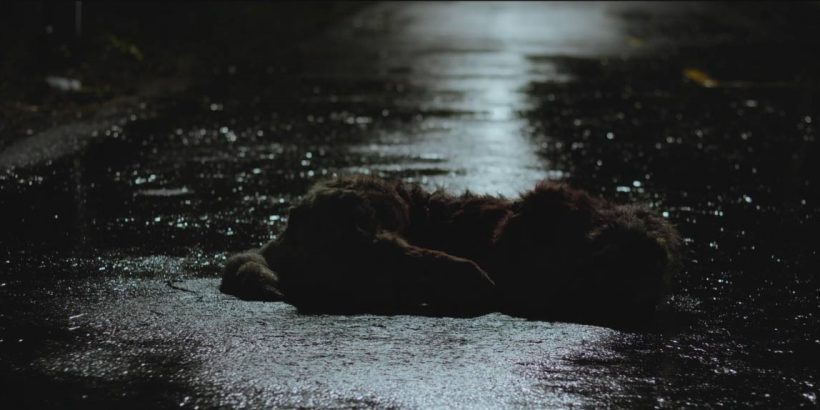 So yeah, you’re reading this and telling yourselves “I’ve seen this story in a movie at least six times already“, and guess what? You wouldn’t be wrong. The Monster isn’t trying to revolutionize that particular trope. As a matter of fact, I was so sure that this was going to end up with the little girl awakening from a bad dream at the end (with her mother being the metaphorical monster of the film), I didn’t want to see it. But I’m so happy I changed my mind, because as it stands right now, The Monster is my favorite film of the year, horror or not. The part of the story that features the monster might be what sells the film to audiences, but what The Monster is really about is the tortured relationship between a mother and her child. It’s painfully obvious that there’s a deep resentment between Kathy and Lizzy, and what the film does spectacularly is reveal the depths of this resentment through flashbacks that are interspersed throughout the film. There’s no rhyme or reason behind when/where Bertino inserts these flashbacks, they just occur as the film proceeds, yet they feel so perfectly placed that he must’ve had an idea of where he wanted to place them. What’s even more powerful than the flashbacks, are the scenes in the car, where we (and the two main characters), slowly discover how much true love they have for each other. And while it might seem strange for a horror film to feature scenes that will make your eyes well up with tears, that’s exactly what The Monster did to me. And I suspect it’s gonna get a lot of you misty as well. 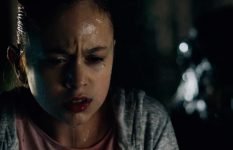 But this film offers even more than that. The scenes in the car, with the creature lurking just outside, are incredibly potent and well done. They serve to highlight the feeling of claustrophobic horror that being in the middle of the woods, in a disabled car, while being sized up by a ferocious monster has on the characters. And as I said earlier, this film really does have a good old fashioned monster in it to boot! Alec Gillis and Tom Woodruff designed and created the titular beastie, and it is indeed one unique and ferocious creature. My singular complaint about the look of the monster is it’s milky white (hence expressionless) eyes. But the rest of the creature design is spot on, and the best way for me to describe it is what you might get if a dragon and a gorilla got drunk and made a baby. Bertino doesn’t spare the bloodshed either, and although it takes a little while for the red stuff to splatter, once it does – it does so gleefully. 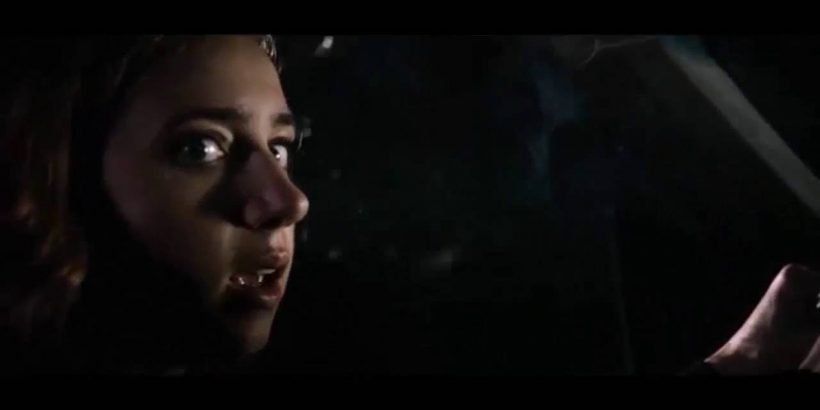 But ultimately, none of this would’ve worked without two strong actresses in the lead roles. And without question, both Kazan and Ballentine give two of the best performances of the year, in any film – not just horror. They’re both so damned good that I hope they’re remembered come next February (Oscar time), because to ignore them would be a crime. Kazan is brilliant as a mom who knows it’s too late to make up all the time with her daughter that she lost to the bottle, but hopes that her daughter will forgive her anyway. Ballentine is just as brilliant as a daughter who wants nothing more than to be loved by her mother, but knows that she’s always gonna come in second to the bottle. Together the two of them share moments of such pure heartfelt emotion, that I nearly forgot I was watching a monster movie. There are some confrontational scenes between the two of them here that count as some of the most powerfully angry scenes I’ve ever seen in any film. If you’ve ever seen The Champ (1979), you might have an idea of how some of the more emotional scenes in this film go. But this is a far better movie than that film is.

The Monster will be available on DirecTV on October 6th, and will be in theaters and On Demand on November 11th. 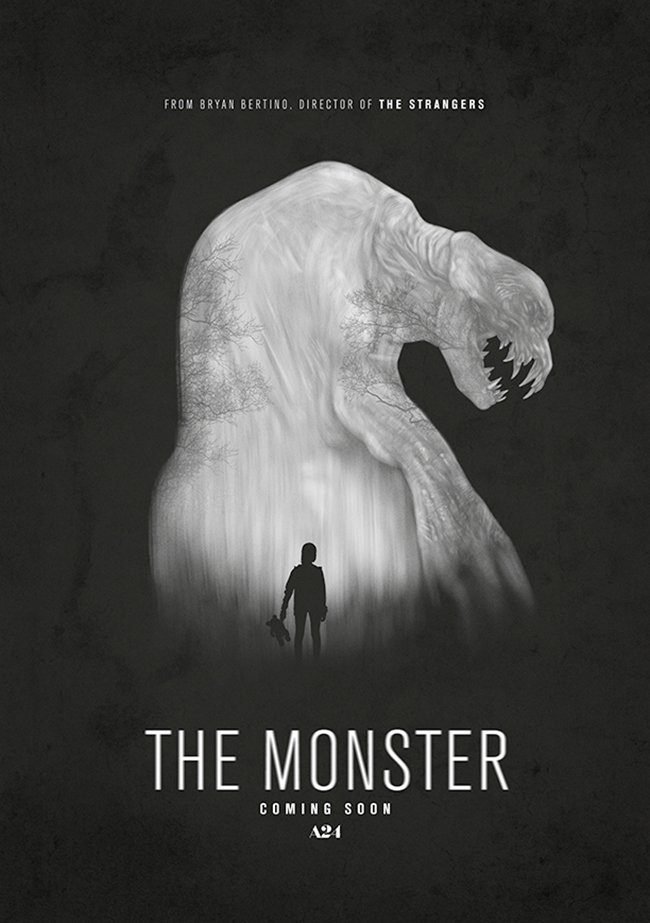 Back in the late 60’s and throughout the 70’s there were albums that youngsters weren’t supposed to listen to known as “Party Records“. Recorded by artists like Redd Foxx, Lady Queen Bee, the legendary Blowfly and the one & only Rudy Ray Moore. Featuring covers that usually had nude women in provocative poses front & […]

One of the few banes of my sad, angry existence (besides my wife & kids) are found footage films. Unlike some other employees here at Gruesome, I literally despise everything about them. The sub genre stated out with a bang with The Blair Witch Project (1999), and has had a few meager highlights since then, […]

The latest entry in the subgenre of young women finding power as werewolves is I Am Lisa, a film that follows such entries as Canada’s Ginger Snaps (2000) and the Danish/French coproduction When Animals Dream (2014). Prolific director Patrick Rea’s (Arbor Demon [2016]; Nailbiter [2013]) latest feature, I Am Lisa combines a powerful revenge story […]