Gritty, realistic violence is a common feature of many films of the 1970’s, in genres as diverse as police drama and horror. Writer/director Wes Craven’s The Hills Have Eyes (1977) is the follow-up to his own groundbreaking directorial debut, The Last House on the Left (1972), and like that film, it uses the 1970’s newfound freedom to show realistic violence to comment on society in general. Based on the 16th century Scottish legend of Sawney Bean, the film tells the story of an older couple and their adult children that find themselves stranded in the desert and are set upon by a clan of cannibal hillfolk. After the death of some of the family members at the hands of the cannibals, the survivors turn on their attackers with vicious intent. Craven presents almost three films in one: a suspenseful thriller, a violent siege film, and a brutal revenge picture, ramping up the action and brutality as the film progresses. The violence, while prevalent, is far from gratuitous; it is all in service to Craven’s themes regarding the nature of humanity and society. 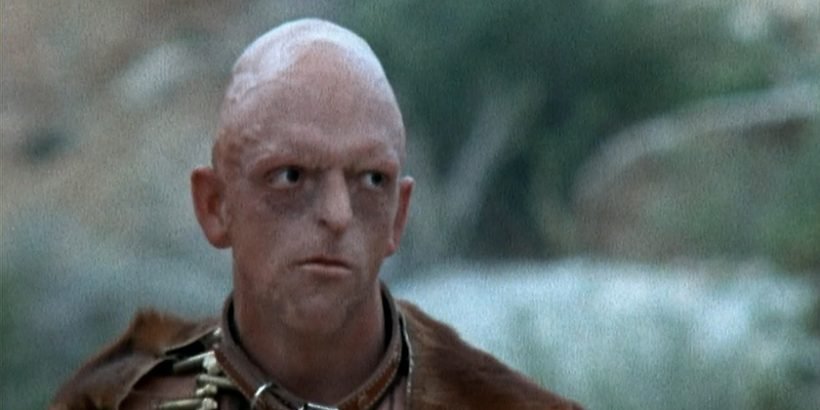 Ethel (Virginia Vincent) and Big Bob Carter (Russ Grieve) want to celebrate their silver wedding anniversary (number 25) by driving out into the desert and finding the old abandoned silver mine they inherited from a distant relative. They hitch their camper to their station wagon and head out West with their adult children Brenda (Suze Lanier-Bramlett aka Susan Lanier), Bobby (future Academy Award winning documentarian Robert Houston), and Lynne (genre favorite Dee Wallace) along with Lynne’s husband Doug Wood (Martin Speer) and their infant daughter Katy (Brenda Marinoff). Also along for the ride are their two dogs Beauty (Flora) and The Beast (Striker). While at a “last chance for gas” station, the owner, Fred (John Steadman), warns the family to stick to the main road. Of course, they ignore his advice, and end up stranded with a broken axle. When Big Bob finds his way back to the gas station for help, Fred explains that the family is in danger from a mutant clan of cannibals who prey upon stranded travellers. From there, things go bad. Oh, and did I mentioned that the area they are stranded in is mostly likely an old nuclear testing range? The mutant family consists of hulking Papa Jupiter (James Whitworth),  Mars (Lance Gordon),  Pluto (horror icon and the film’s poster boy Michael Berryman in his genre debut), Mercury (the film’s producer Peter Locke in a cameo), Mama (Cordy Clark), and daughter Ruby (Janus Blythe). The Jupiter clan attacks the Carter/Wood family, brutally murdering several members, raping Brenda, and kidnapping baby Katy (presumably so they can eat her). With everything taken from them, the remainder of the Carter/Woods seek their own brutal and innovative revenge upon the cannibals while also trying to rescue the baby. They find an unexpected ally in Ruby, who is trying to run away from the rest of her group. Can they save little Katy, will Ruby be able to escape her own cannibal clan, and can the surviving family members get revenge without descending into the same level of brutality as their attackers? 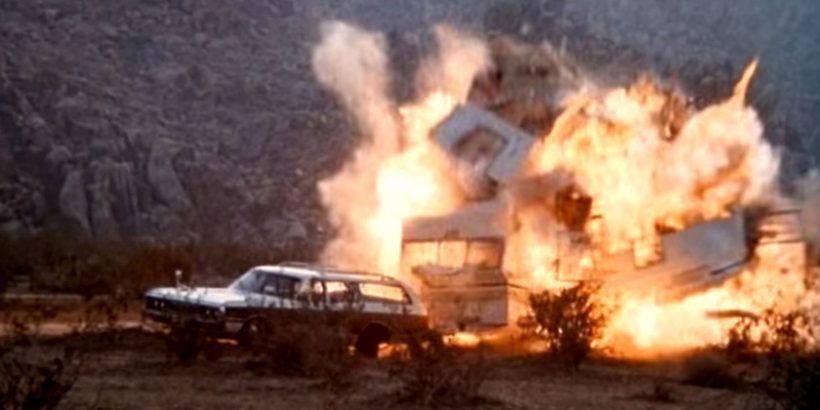 The Hills Have Eyes is almost three films in one: an atmospheric suspense thriller, a tense family-under-siege film, and a brutal revenge picture. For the first third of the film, Ruby is the only member of the cannibal clan that the audience sees clearly. The remaining members are only seen in shadows and quick cuts or are heard over the CB radio. The Carter/Wood family does not know that they are being watched and stalked, but the audience is fully aware of the danger, creating an air of suspense. Once the Jupiter clan begins their attacks, the film shifts into a siege picture, with the Carter/Woods trying to defend their camper. The tight, enclosed space of the camper gives the audience a sense of claustrophobia. When the mutants do break in, the terror and brutality of their attack is amplified by the tight space. The final third of the film moves more into action/revenge territory, as the survivors head out after the mutants to try to rescue the baby as well as to seek revenge. They demonstrate their resourcefulness by improvising traps for the mutants utilizing items they have at hand: wire, disabled cars, dead family members, etc. When they do end up directly engaging the cannibals, the attacks and revenge carried out by the surviving Carter/Woods are as savage as those of their attackers. 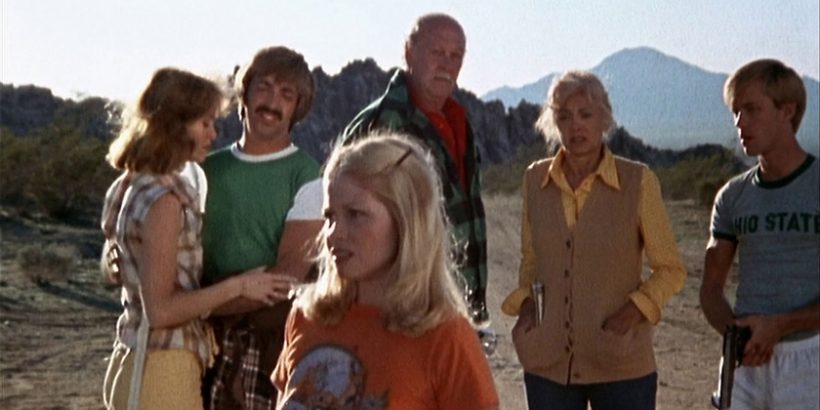 The Hills Have Eyes is a brutal film. Its reputations for brutality is such that, long after viewing,  many audience members falsely remember seeing the deaths of certain characters, even though they actually survive. It deserves it place among other famously violent classics of the 1970’s, such as Tobe Hopper’s The Texas Chainsaw Massacre (1974). Some of this can be attributed to the fact that it shares the production designer, and even some of the props, with that earlier film. Taken out of context, though, its scenes of violence may seem relatively tame to modern moviegoers, but viewed within the whole of the film, they still hold up and retain the ability to shock and disturb. This is due in part to Craven’s impeccable sense of pacing as well as the excellent cast’s ability to help the audience truly feel their characters’ sense of loss. In this way, the film is not only physically brutal, but emotionally so as well. 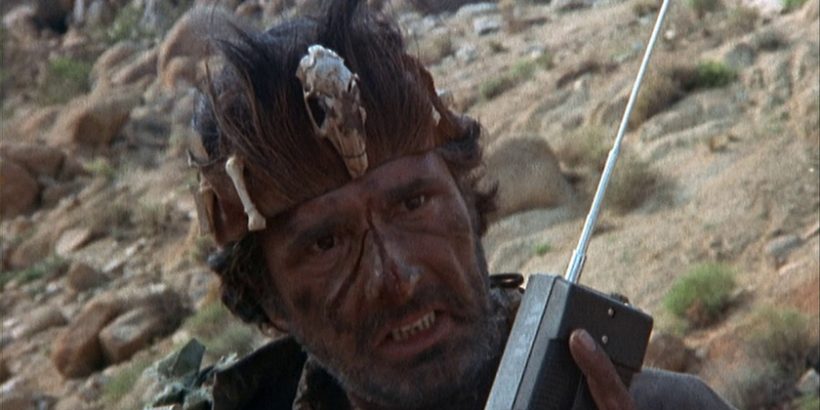 While definitely an exploitation film, the violence and brutality in The Hills Have Eyes is not gratuitous; they are in service to Craven’s central themes. With degrees in English, Psychology, and Philosophy, Craven has a reputation for using his films to comment on the society and the human condition, and this film is no different. He explores the nature of “civilized” humanity and how it can descend back into barbarism when provoked. The different reactions by and fates of the two dogs, Beauty and The Beast, mirror the those of the members of the Carter/Wood family that are victims versus the family members that survive. The Carter/Woods family begins the picture as the stereotypical middle-class American nuclear family. Once they have lost everything that matters to them – their possessions / their loved ones – they lose their civilized natures as well. In the end, Craven presents the cannibal Jupiter clan and the Carter/Woods family ultimately as not being that different. The brutality of the surviving Carter/Wood’s revenge and the red tinted, freeze-framed final shot drive that point home. 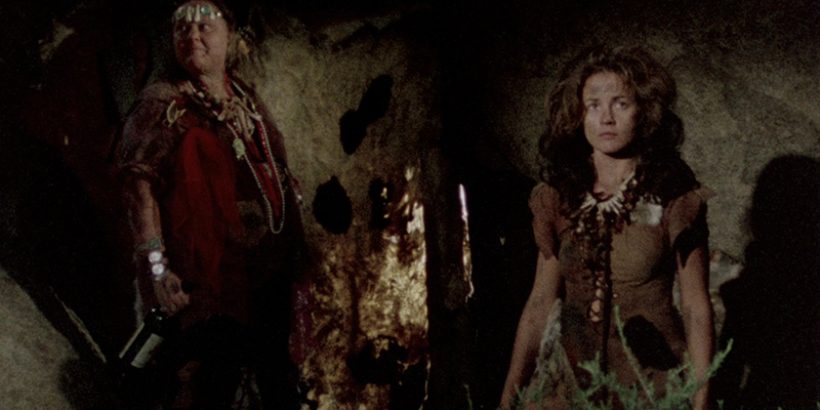 The Hills Have Eyes rightly is considered a classic of brutal, violent 1970’s exploitation fare. Writer/director Wes Craven’s guides the audience through its three acts, gradually ramping up the violence as the “civilized” characters descend into barbarism. The film’s excellent sense of pacing is coupled with strong performances by the cast (in particular, those playing the Carter/Woods family) to amplify the visceral and emotional impact of the brutality on screen. As with many of Craven’s other films, he uses the violence to comment on society and the human condition. A brutal and groundbreaking film when released, The Hills Have Eyes still holds up, retaining its power to frighten, shock, and be thought provoking.

The Hills Have Eyes 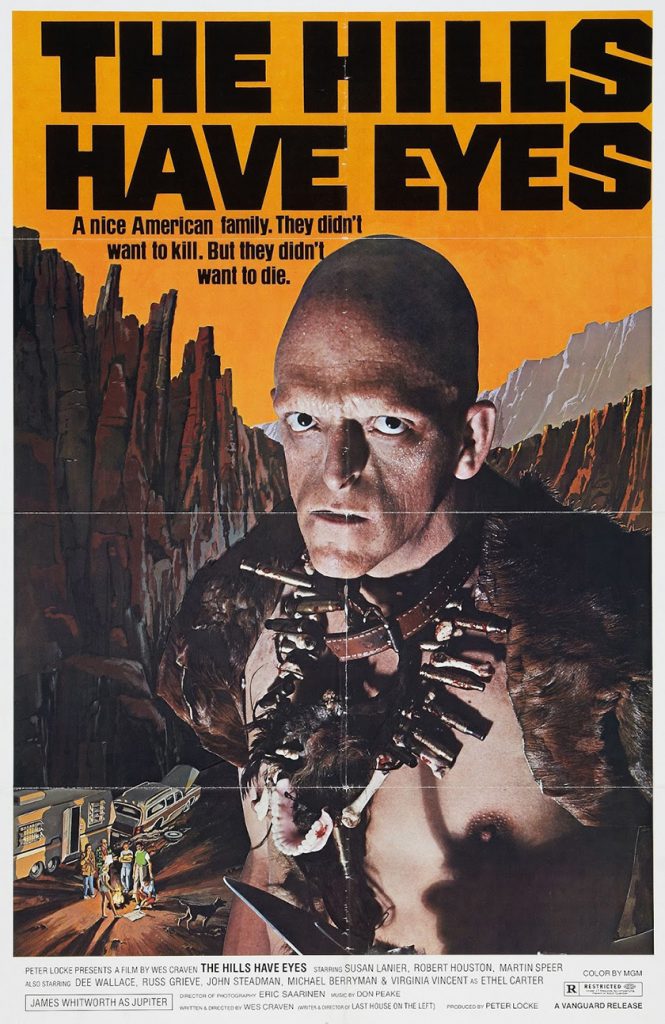 Netflix is killing it for October Halloween 2017. While Little Evil (2017) was launched on the streaming site in late September it joins a handful of similar genre films releasing […]

On episode 497 of Horror News Radio: The Grue-Crew review… JURASSIC WORLD: DOMINION (2022). Warning: possible spoilers after the initial impressions! Be sure to subscribe to the Gruesome Magazine YouTube […]

Writer/director Mia Kate Russell explores the potential terrors of inaction in her Australian short film Maggie May, which offers up some of the most disturbing horrific images in recent memory, […]