Our editor, the esteemed Doc Rotten, seemed positively gleeful when he gave me the opportunity to review the new film Halloweed. Maybe he realized I grew up in the 60’s and early 70’s and thought I would be able to relate to the overt subtext (is that an oxymoron?) of the title. Maybe it was because the cast included Ray Wise, Tom Sizemore, Danny Trejo, and Jason Mewes. I’m not really sure. All I know is he punctuated his email with a “Woot!” Sadly, the aforementioned actors have little more than bit parts, but Halloweed makes up for their minimal screen time with a steady dose of laughs.

Written by  Michael Bussan and Dale Zawada, Halloweed tells the story of a couple stoners, Trent Modine (Shannon Brown) and his step brother Joey (Simon Rex), whose father / stepfather is the Bridgeport Butcher serial killer, Vincent Modine (Tom Sizemore). Just prior to his execution, Vincent exhorts Trent to avenge his death and finish his work. As a result, the locals don’t take too kindly to Trent’s presence. That night, Trent sees an infomercial proclaiming the small village of Mooseheart as a dream town and Trent and Joey decide to relocate there in order to escape the family stigma. However, Mooseheart might not be the paradise it proclaims itself to be. The welcome sign reads “The Greenest Town Around,” a not so vague reference to the “weed” part of the movie’s title, but it’s also home to the Candy Corn Killings of the 1980’s and the killer has never been caught. 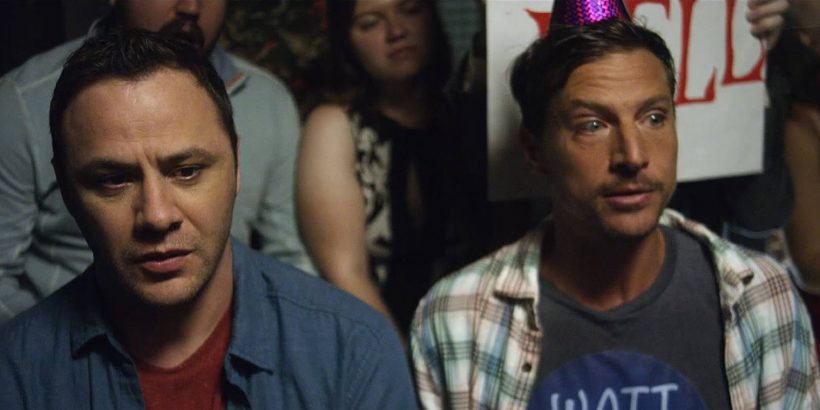 When the Candy Corn Killings inexplicably resume, the town discovers Trent’s family lineage and immediately suspects he is committing the new murders. Trent, Joey, and Madison (Michelle Mueller), Trent’s love interest,  spend the rest of Halloweed trying to exonerate Trent by discovering the true identity of the Candy Corn Killer. The plot moves along through what amounts to a series of connected comedy sketches, seamlessly telling a coherent story.

I expected the humor in this movie to center around dope smoking, sex, and miscellaneous bodily functions and I wasn’t disappointed. Even so, I found myself laughing throughout. Even the Candy Corn Killer’s costume is ridiculous, yet funny and creepy.

Simon Rex as Joey, is hilarious and his timing is impeccable as he plays off Shannon Brown’s comedic straight man portrayal of Trent. Joey’s mind seems to be focused on a few very specific activities: getting weed, smoking weed, getting more weed, proclaiming he is not gay, making frequent comments that indicate he is gay, and offering to commit homosexual acts to prove he is not gay. I know it sounds borderline offensive, but Rex’s delivery of the lines is so matter of fact and unashamed, that it works. 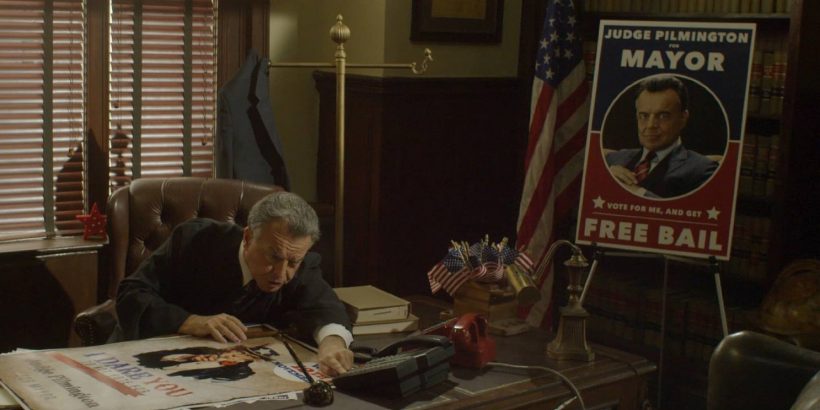 Trent and Joey rent rooms in Mooseheart from Lloyd (Robert Craighead), a very odd local that doesn’t mind renting to them as long as they’re not Jews, gays, or druggies … never mind the handcuffs in the baby crib. By the way, according to Lloyd, “Weed ain’t drugs. It’s God’s herb.” Danny Trejo plays Patch, the owner of a Lube Shop & Pumpkin Patch and the local weed kingpin. Patch’s motto is “He who has the weed, has the power.”

Early on, we also encounter Mooseheart’s sheriff (Lester Speight) and his deputy (Deja Dee). There’s a hilarious, ongoing bit that consists of the deputy wanting to anal cavity search nearly everyone they encounter. The sheriff keeps reminding her that she’s not a prison guard anymore, but still, she’s always prepared with latex gloves in hand while practicing her technique in the air. During one exchange, she tells the sheriff, “Sometimes it hides in the darkness. You just have to ask yourself, ‘Are you brave enough to go into the darkness?’” The sheriff quickly realizes that once again, she’s “talking about assholes!”

Zach (Vince Corazza), the truck driver that Trent and Joey hitch a ride with; Mayor Price, played by Jim O’Heir who fans of Parks and Recreation  will recognize; Connor Price (Jayson Bernard), the Mayor’s son; Judge Pilmington (Ray Wise); Sandy (Jacqui Holland) an obnoxious, self-absorbed woman; and Quincy (Jason Mewes), a pot dealer working for Joey round out the cast of characters. 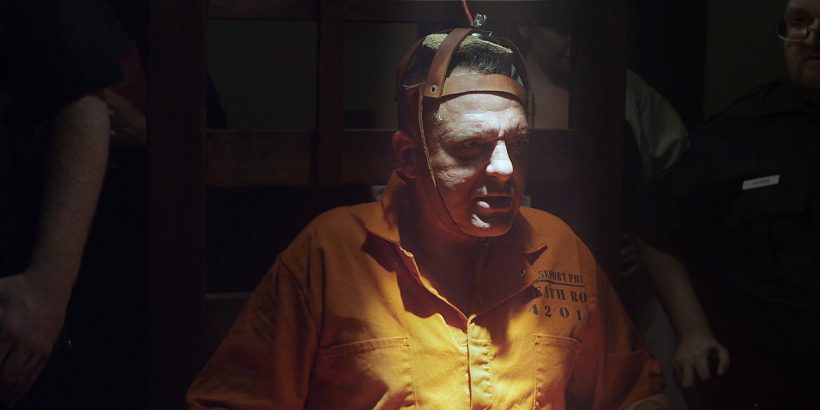 Though their time on screen is short, the four actors mentioned at the start of this review make the best of it, especially Tom Sizemore and Ray Wise. Sizemore is at his over-the-top best as the shameless and depraved Bridgeport Butcher as he tries to gross-out the guards and audience partying at his execution. Wise’s depiction of the bumbling Judge Pilmington includes several hilarious scenes that I suspect were mostly improvised. In fact, they remind me of the comedic outtakes sometimes included behind a movie’s end credits.

Halloweed is directed by LazRael Lison, who also directed Private Number (2014). Lison does a fine job exacting the  timing required for  the humor to work. Brady Hallongren, editor, should also take a bow in that regard. 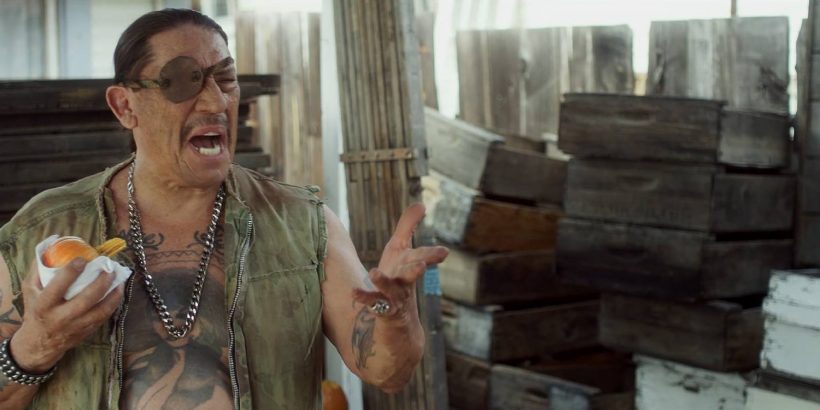 This movie has the feel of a low budget film, which it is. But for the most part, the budget doesn’t detract from the humor. However, viewer beware: if lowbrow jokes about private parts, sex, or weed are not your thing or you are offended by them, you will find little to laugh at in Halloweed. On the other hand, if you have no problem laughing at gags about erections, oral sex, anal cavity searches, and dopers, or if you think Cheech and Chong’s Up in Smoke (1978)  is one of the funniest movies you’ve ever seen, you should get a few laughs from Halloweed. I’m not proud. I laughed! 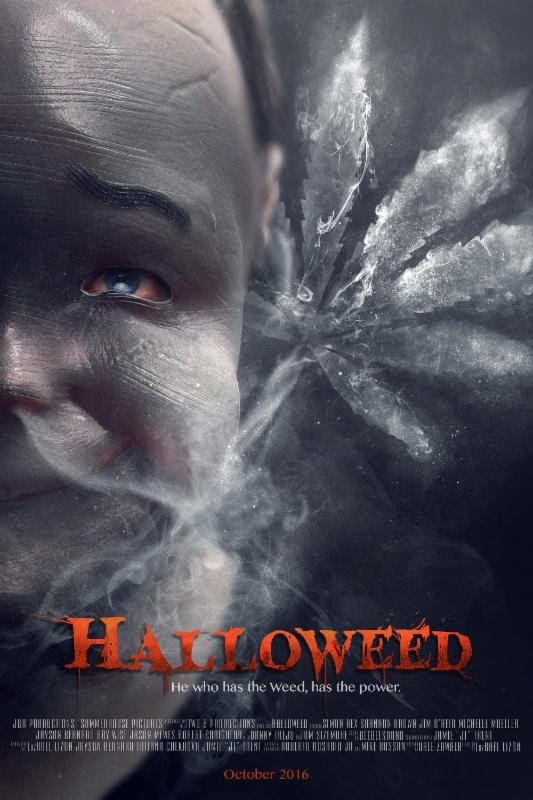 Too many horror movies try to separate themselves from the pack by increasing the amount of blood and gore they throw across the screen, hoping that if the audience is grossed out enough they won’t notice the weakness of the plot or the thinness of the characters. That’s why it’s such a refreshing experience to […]

I always try to root for non-theatrical, low-budget  films because oftentimes, maximum effort is put into them, although low budgets, new directors or  writers, or lack of star power can create an uphill battle. That being said, I ignored the warning postings and ventured into Chupacabra Territory.  Taking liberties with a film is fine; as […]

Attack On Titan takes place in an unspecified future, a future in which humanity has been beset upon by a race of humanoid giants known as “Titans”. These beings are (as their name implies), much larger than normal humans and feed one one thing – us! But after a prolonged struggle some 100 years […]