What’s the good word Grue-believers? My love/hate (mostly hate) affair continues with Fear the Walking Dead. If you haven’t listened to it yet, go download the HNR Extra episode where Doc and I discuss all things Fear the Walking Dead. One thing that makes me happy about this show is that I only have to deal with two more episodes of this anger inducing atrocity. Are you guessing from my tone I wasn’t a big fan of this week’s episode?

Well, you would be about 25% correct. For the first three quarters of the show I was actually engaged and interested. My phone actually stayed by my side and was not in my hands for the most part. Then, the inevitable happened, the show tried to take a tender moment between Travis (Cliff Curtis) and Madison (Kim Dickens) and follow it up with another heart to heart between Madison and Alicia (Alycia Debnam Carey). This caused the episode to fall flat on its face. Both scenes were drawn out with unnecessary dialogue causing  the episode to lose any  steam it generated throughout the first 45 minutes. Well, let’s get to it. 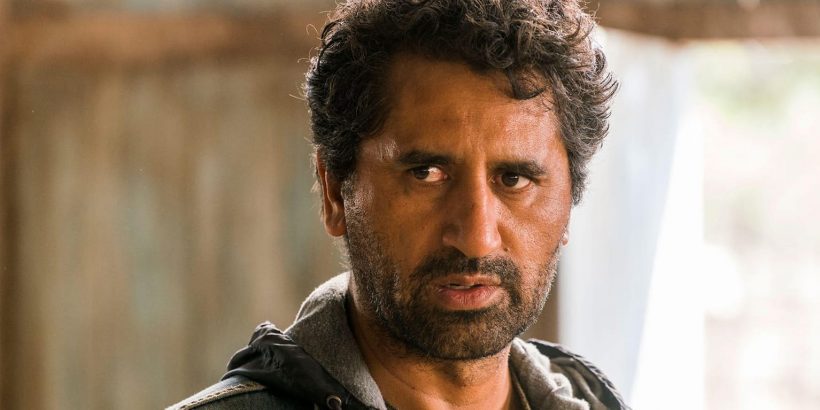 Apparently, Madison’s bright idea (pun kind of intended) to light up the Rosarita Beach Hotel for Nick (Frank Dillane) to see at the end of last week’s episode wasn’t the best idea after all. This beacon of ill-conceived hope caught the attention of a  flock  of drifters. They all show up at the hotel’s locked front gate at the beginning of this week’s episode seeking refuge. Everyone on the inside is apologetic to the  outsiders but will not let them in. Well, that is all but one straggler — Travis, who shows up in the crowd. They open up the gates to let him in then quickly close them again.

After the opening credits, we get the first in a series of flashbacks of how Travis ended up solo. We were last left with Travis in shock after Chris killed the farmer whose property they invaded after he shot James (Israel Broussard) in the leg. Travis, being the resourceful gent he is, went to the house after noticing the bullet went clean through the leg of James to gather materials to stitch up the entrance and exit wounds. Later that evening, Chris (Lorenzo Henrie), Derek (Kenny Wormald) and Brandon (Kelly Blatz) are sitting around the fire roasting chicken. Meanwhile, Travis tends to James who seems to be in a lot of pain. Travis has a chat with Chris about what transpired and Chris’s lack of any sensitivity or remorse. Chris says this is the way things need to be now.

Back in real time, Travis and Madison are on the balcony. Travis asks to the whereabouts of Nick. Madison answers then replies with an inquiry of Chris to which Travis says “I had no choice.”

Flashback to the farm, the fellas decide that it’s time to leave the farm due to the chicken supply being gone. Travis did protest telling them they should have been eating eggs instead of chicken, smart guy. Much to Travis’s protest, they load James (who is still in a lot of pain) on the back of the truck. Before they can even get out to the main road, James blacks out from the pain and Travis convinces the crew to go back to the farm until James is fully recovered. 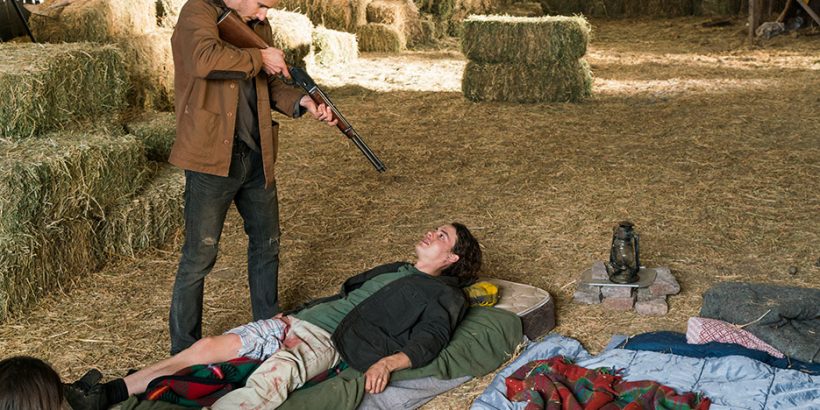 That evening Travis is in the barn tending to James where he  overhears the other guys outside talking. They want to put James out of his misery. Travis goes out to  protest, pulls a gun on the guys and even fires a round at their feet. Apparently, there used to be a fourth musketeer that was bitten and then dispatched by James, so now he is fearful that they will do the same to him. Knowing this, Travis locks himself in the barn with James overnight to protect him.

The following morning Travis lets a worried Chris in the barn. Chris brought food and explains that his worry is, if the crew is in such a hurry to do away with James, what will they do to him if something happens to him. Ashe and Travis hug, Chris holds Travis tightly and yells for the guys to enter. They come in and shoot a protesting James in the head. The decision is made to leave Travis behind while the three amigos head toward San Diego. Travis pleads with Chris, but Chris has made up his mind. He feels that Travis will hold him back because he cannot do what is needed to survive in the new world. As they drive away, you can see the conflict in Chris’s expression. 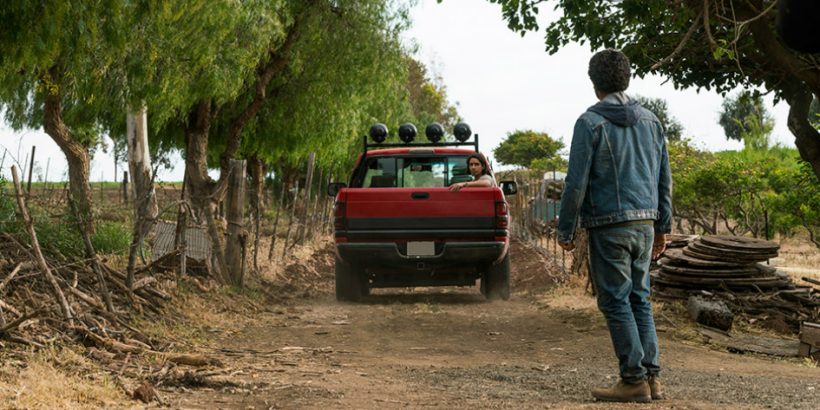 Well, friends, that brings us to the present time where we have to suffer the two scenes which I alluded to earlier. Travis is upset he failed Chris’s mom in his promise to take care of Chris and way too much time is spent on this scene. It is a failed attempt at emotional dialogue. Madison then makes her way to Alicia in another drawn out scene in which she tell Alicia that her father’s death was a suicide and that she always loved Alicia as much as Nick despite giving him more attention for the obvious reasons and thinking Alicia was “good”. Alicia replies with she had to be and finds that Madison’s main worry for Nick was that he was too much like his dad. These scenes seemed like the writer of this episode did not know how to fill the remaining ten minutes of the show so used sub-par scenes to fill it. At the very end, we see more people crowding outside the gates including two familiar faces: Brandon and Derek but a notable missing face is Chris.

Date of Death was written by Brian Buckner and directed by Christoph Schrewe. They had me for the first three quarter of the show, then ruined it at the end thus making my rating drop a full point on the Thug Meter. Another strike against the episode was no Nick. They have two episodes to wrap this mess up but I will say I am intrigued as to where Chris is. 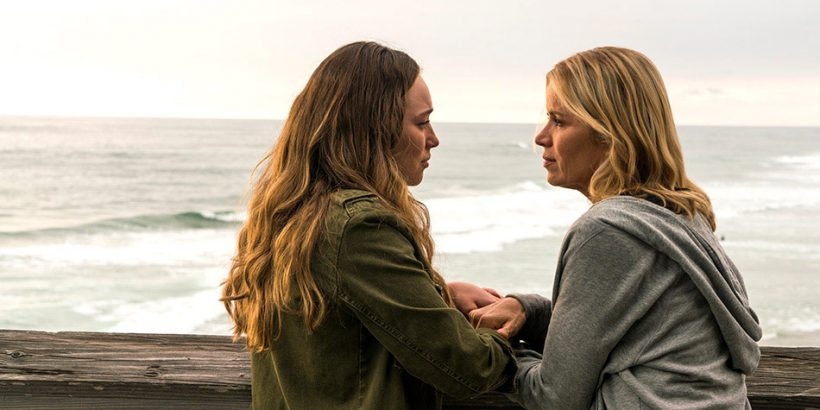 As I told you last week, I was going to Shocktoberfest. We made a change and went to Reaper’s Revenge in Olyphant, PA. This was quite frankly one of the best haunts I’ve ever been to. If you have the chance to make it there, by all means go. You will not be disappointed! http://reapersrevenge.net/

It is that time again, Grue-believers, that day of the week you all look forward to when your resident thug does his review of the weekly installment of Fear the Walking Dead. I think I know why you look forward to it though. Is it for my masterful skills in expressing myself artistically through the […]

Ash vs Evil Dead  isn’t a show too based in narrative weight. After all, coming from the original  Evil Dead  series that always swung for the bizarre and brazen more than it has dramatic heft. Even the original film – for all its over the top early Bruce Campbell face contortions – was more over […]