What makes a giallo a giallo? Does it need to display a minimum requirement of specific tropes to fit the bill or, is it really a matter of how a film feels? Though often classified as a giallo, an argument could be made that director Duccio Tessari’s The Bloodstained Butterfly (1971) has more in common with poliziotteschi, Italian police action films. A young woman is found murdered in a park and a television sports reporter is the prime suspect. Though he is convicted on overwhelming evidence, similar murders follow, casting doubt on his guilt. Courtroom drama, police investigations, and low key murders give the film a more conventional murder mystery/police procedural feel than other gialli of the era. The mystery itself is not all that compelling, and the main player’s motivations do not really bear scrutiny. While not really containing the dramatic lighting and stylized shots often associated with gialli, the filmmakers still maintain visual interest by heavily featuring the picturesque and serpentine streets of the 2000 year old Italian town of Bergamo.  A lesser giallo, if a giallo at all, The Bloodstained Butterfly may still be of interest to fans of early 1970s Italian cinema regardless of genre.

FranÃ§oise Pigaut (Carole AndrÃ©), a young woman in her late teens, is found murdered in a local park. There are a number of witnesses who saw a man in a hat and trenchcoat fleeing from the scene. One of the witnesses identifies the suspect as Alessandro Marchi (Giancarlo Sbragia), a television sports reporter. As Inspector Berardi (Silvano Tranquilli) and the rest of the police investigate the incident, the evidence increasingly points towards Alessandro. Among the items pointing toward his guilts are the fact that murdered young woman was close friends with Alessandro’s daughter Sarah (Wendy D’Olive), his fingerprints are found on the murder weapon, and he has no alibi for the time of the murders. The police arrest Alessandro and he is put on trial. In the courtroom, scenes of the investigation as well as speculation/recreations of what may have happened provide the visuals while the prosecution and defense present their cases. Despite the apparent best efforts of defense attorney Giulio Cordaro (GÃ¼nther Stoll), Alessandro is convicted. Similar murders follow, even though Alessandro is now in jail. Did the jury convict the wrong man? Will Alessandro regain his freedom? What could be the motivation for the murders? Possible alternative suspects include Alessandro’s wife Marta (Ida Galli as Evelyn Stewart), his daughter Sarah, her friend/lover – the temperamental pianist Giorgio (Helmut Berger), and even the attorney Cordaro.

Director Duccio Tessari’s The Bloodstained Butterfly is often classified as giallo, but its concentration on the police investigation and court case makes it feel less like a giallo and more like one of the poliziotteschi, Italian police procedurals, of the era. There are some giallo tropes on display here, for certain, but they really are not enough to fully classify it within that genre. The title itself fits right in with other enigmatic animal-themed titles popular with late-1960’s / early-1970’s gialli, but that is probably one of the more giallo-esque things about the film. Gruesome, or at least creative, over-the-top murders are one of the more popular giallo tropes, but the murders here are low key and frankly rather mundane. We do get a glimpse of that genre staple, the black gloved killer, but Tessari and his cinematographer Carlo Carlini present this in a more matter-of-fact way than most films of the genre. Carlini’s camera work, while good, is fairly straightforward, with only a few forays into the dramatic angles and shot choices viewers have come to expect from gialli. Plot-wise, the film feels more like a police procedural, with its concentration on the investigation and prosecution of the case. Again, there are some giallo style touches, such as bouts of madness and somewhat twisted motives, but they seem more like “spices” added to the film and not like the central style.This is not to say that the film does not have a sense of style; it is more that the overall aesthetic is that of a police procedural / courtroom drama with some giallo elements.

While not adhering to many of the stylistic touches associated with gialli, director Tessari and cinematographer Carlini still provide plenty of visual interest. Filmed in the 2000+ year old city of Bergamo in Lombardy, Italy, they give The Bloodstained Butterfly a strong sense of place. The narrow, twisting streets, alleys, and public squares of the old part of Bergamo feature prominently. In keeping with the film’s poliziotteschi feel, there is even a chase through the streets, but seeing as these streets are narrow and serpentine, it is a foot chase instead of a car chase. It works really well and makes one feel like almost warren-like nature of the older parts of the city. Though Bergamo is a modern city, the filmmakers keep the action in the older parts of town, giving the street scenes a air of claustrophobia and paranoia that work well within the story.

Without the stylistic touches associated with giallo, the success of a thriller such as  The Bloodstained Butterfly strongly relies upon whether or not the central mystery is engaging. Unfortunately, the who-done-it aspect of the film is just not compelling enough to sustain the audience’s interest. While there is indeed a puzzle to be solved, there is no real sense of mystery or suspense. Characters betray other characters and hidden motives abound, but they feel half-hearted. Even the requisite red herrings never catch the viewer by surprise. That said, the final resolution does actually seem fairly satisfying . . . at first. It is only upon further reflection that the main players’ revealed motivations make no sense at all, not even in a “Hey, it’s giallo. Just go with it” sort of way. If the film had maintained a full-on giallo feel throughout, then the ending would have worked better. As it was, since most of the film felt grounded in reality, the quizzical nature of the reveal did not really fit within the story.

In the end, The Bloodstained Butterfly feels more like a police procedural / courtroom drama with giallo influences than a full blown giallo itself. It is missing most of the stylistic and narrative tropes often associated with the more flamboyant genre. Its concentration on police work and courtroom drama give it a mundane feel. The filmmakers’ use of the older parts of the Italian city of Bergamo provide visual interest, but it is not enough to carry the film. While the final reveal adds a bit more giallo flavor to the piece, it does not work well within the context of the film. The Bloodstained Butterfly is not a bad film, it is just that it is fairly lackluster and would disappoint most giallo fans. Those interested in a conventional Italian police drama with giallo-esque undertones may find something of interest here, though. 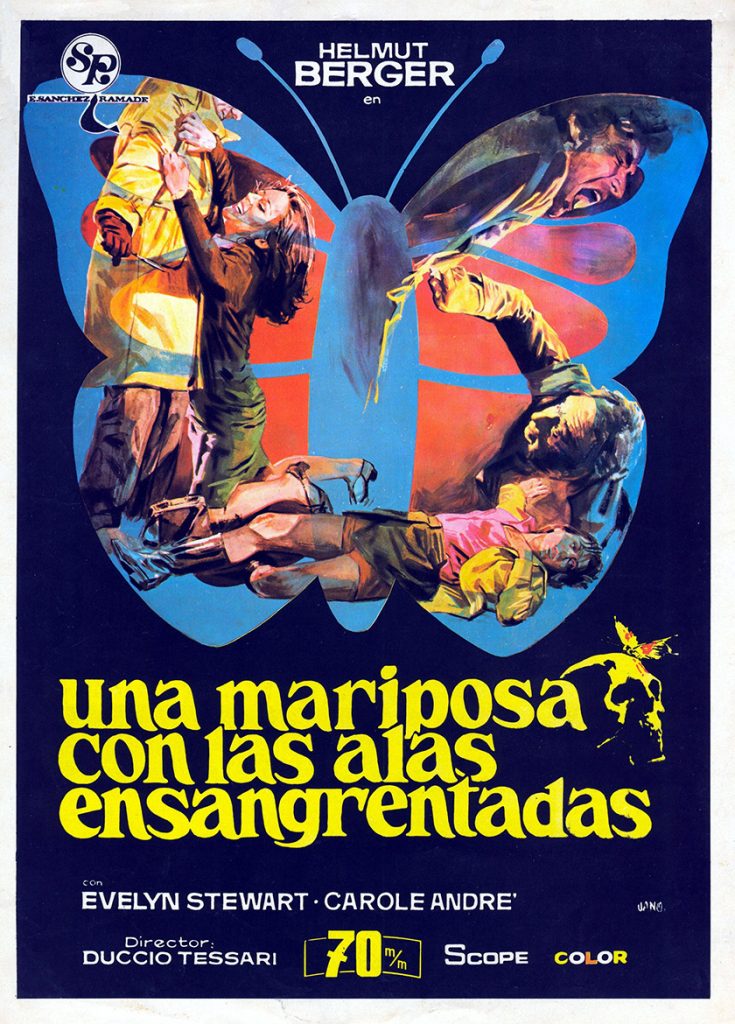 Thanks to horror films and urban legends, tales of babysitting terror are always in vogue. Boxleitner brothers Lee and Sam offer up a truly disturbing take on this fear fare subgenre with their award-winning short film Die! Sitter! Die! Rupert. The short opens with a bit of drama that allows viewers to get to know […]

Imagine Film Festival, which runs April 10–20 at EYE Filmmuseum in Amsterdam, the Netherlands, is loaded with amazing genre film fare from around the world. Among the outstanding slices of cinema offered during the fest’s first few nights this year were two films dealing with different types of domestic horror, and a behind-the-scenes documentary about […]