Hello, Grue-believers, how the heck was your holiday weekend? Mine was filled with Fantasy Football goodness while, at the same time, wondering why Dragon-Con had to be scheduled the same weekend as all my drafts. I will have to do something about that next year.

Let’s get back to the task at hand. At this point, it does seem like a task or chore to watch Fear the Walking Dead. The first half of the season showed a bit of promise, but, so far, the second half is quite underwhelming. Remember last week when I feared that this upcoming episode was going to focus on Travis (Cliff Curtis) and Chris (Lorenzo Henrie)? Well, I was half right. So, that tainted this episode for me immediately. Having to watch my two least favorite characters together just angers me to the point of….well, I really don’t get that angry — just disinterested. Enough of my silly banter, let’s see if Do Not Disturb was truly that bad.

As with the title of last week’s show, a bit of irony rears its ugly head this week as the title Do Not Disturb makes me wonder why I disturb my Sunday nights to watch this show. Wait, I know why. It’s for you, the Grue-believers! You guys and gals are worth the monotony that is Fear the Walking Dead. 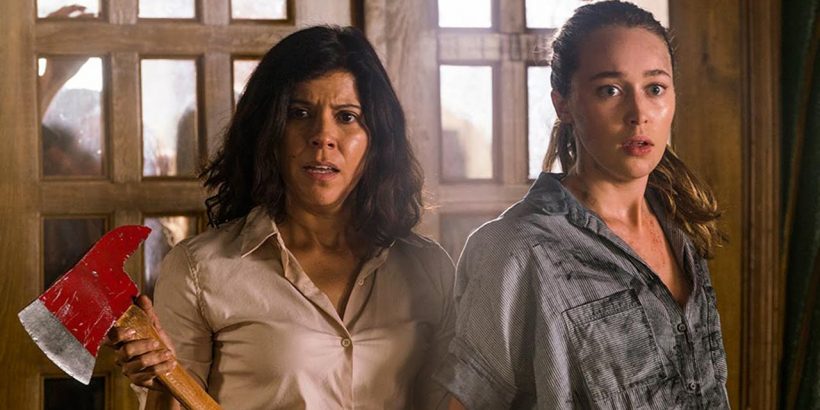 Do Not Disturb started out with a flashback of a wedding at the hotel that Madison (Kim Dickens), Strand (Colman Domingo), Alicia (Alycia Debnam Carey) and Ofelia (Mercedes Mason) are currently inhabiting. The bride’s parents are arguing over the concern of the outbreak the news has been addressing. The argument is interrupted by a daughter-daddy dance where the daddy half has a heart attack. The daughter frantically tries CPR on her daddy who then bites part of her face off. The wedding planner Elena (Karen Bethzabe) and her nephew Hector (Ramses Jimenez) – who looks as though he was a server – immediately exit the hall and lock the doors to keep the outbreak from spreading while leaving the wedding party and their guests alone to face certain doom.

After the credits roll, here comes exactly what I was dreading: the return of the not so dynamic duo of Travis and Chris. They are continuing on their father-son sojourn to give Chris the family time he needs. Travis is still having foot issues due to his brilliant decision to run down Chris wearing no shoes. They come upon a station wagon to which either there was a direction issue or Travis is just plain awesome. To get in the car, Travis smashes the back driver’s side door window and immediately just pulls the handle to open the door without reaching in to unlock it. As Travis works on hot-wiring their new found chariot, Chris goes to a nearby  abandoned diner to look for supplies. He sees two dead bodies on the floor and hears voices in the back. He hurries to fill his bag with water and a giant can of frijoles. As he is exiting, three gents come from the back as some walkers enter the diner. Chris saves one of the gents then takes the opportunity to run to the car and get the hell out of Dodge.

Meanwhile, at the Rosarito Beach Hotel, Alicia is continuing to try to make her way to Madison and Strand while searching for Ofelia. 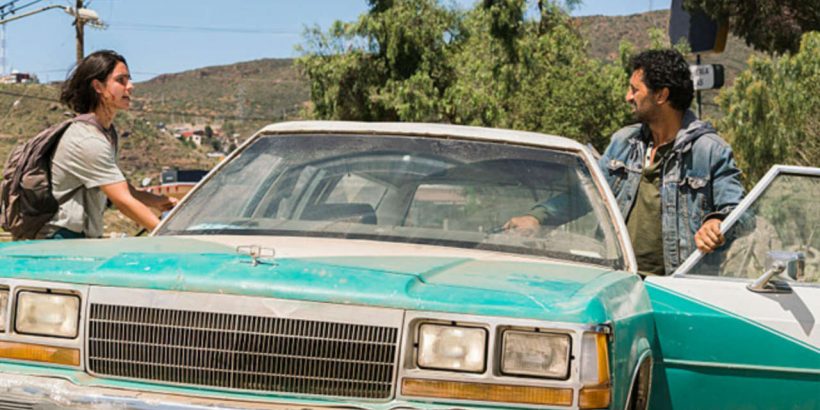 Back to the Thelma and Louise trip: Travis decides this is a perfect time to teach Chris to drive while resting his feet. The car eventually runs out of gas and they pull over to start a fire, drink some water and eat some frijoles. Just then a truck pulls up, it’s the three gents from the diner looking for Chris. Travis and Chris come out of hiding and introductions are made to Brandon (Kelly Blatz), Derek (Kenny Wormald) and James (Israel Broussard). Apparently, they were very impressed with Chris’s walker dispatching skills and offer  them frijoles and water. They even invite  Travis and Chris to join them.

Back at the Rosarito, Alicia has a run in with some walkers and makes her way up the elevator shaft. She is helped out by Elena (the wedding planner) who has been staying in the hotel heading the walkers to certain floors to isolate them while searching for her nephew. Apparently, he had a hand in herding the walkers. Alicia is enlisted so they can make their way down to the first floor to Madison and Strand.

Travis and Chris agree to take a ride with Derek and the boys, but Travis only wants to go to the next town while Chris wants to stay with the guys. They find a farm that looks abandoned and stop to see if there is anything of value to them. It’s rather a nice set-up and in the barn. The boys find some protein in the form of chickens while Travis searches the premises and finds graves which clue him that someone may still be living there. 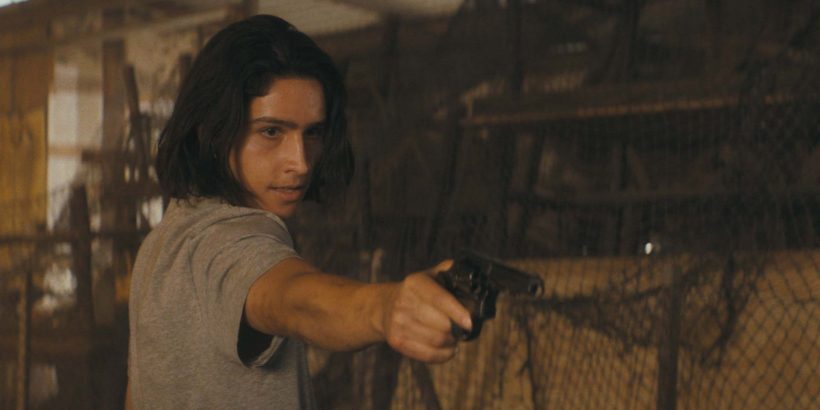 Alicia and Elena make their way to the first floor and find Hector being held captive by some of the angered wedding guests from the beginning. Elena exchanges the hotel keys for Hector, Alicia flings the doors to the bar open to let the walkers out and they flee. While being chased, it looks like they’re about to become a walker meal when they are pulled through a door by none other than Madison and Strand.

Back at the ranch, Travis runs to the barn to alert the boys as to the possible inhabitant. A shotgun toting man shows up who is apparently the property owner. He wants them to leave, causing the boys to draw their weapons. He doesn’t speak English and Travis tries to converse with him. The owner shoots James in the leg causing him to fall and drop his gun. Chris being the big man he is picks up the gun and kills the owner much to Travis’s protest.

Do Not Disturb was written by Lauren Signorino and directed by Michael McDonough. It was a slightly less than mediocre episode as has been the case with the other two episodes of the second half of the season. The action was ramped up a bit which is slightly reflected on the Thug Meter. I just can’t stand the whole Travis and Chris arc; it just makes me want to get violent but hey, at least it is soliciting some sort of response, right?

Fear the Walking Dead Season 2 Episode 10 “Do Not Disturb”

After a cliffhanger like last week,  Preacher  opens in media res as Jesse (Dominic Cooper) and Viktor (Paul Ben-Victor) are tussling in front of Tulip (Ruth Negga). Jesse is coming to terms with finding out the other two are married. Tulip keeps emphasizing that they are getting divorced, but Viktor can’t help but be direct. […]

Ash J. Williams has always been a loner. The Evil Dead  essentially taught the Deadite killer that he could only rely on his own wits to get him out of a situation the hard way. Evil Dead 2 and  Army of Darkness  even taught him that a demonic evil could come from within to challenge […]