Sometimes all it takes is a lone actor in a single location (coupled with a talented technical crew) to create a compelling film; such is the case with Capsule (GenreBlast 2016), which played at the inaugural GenreBlast Film Festival in Culpeper, Virginia the weekend of 2016 August 19-21. Writer/director Andrew Martin’s science fiction drama, based on a story by Felix Forrest, tells the fictional tale of Britain’s top secret space program of the late 1950’s and their success at sending the first man into space two years before the Russians. Unfortunately, the astronaut runs into serious technical issues as well as Cold War era geopolitics. Edmund Kingsley gives a fantastic performance as the beleaguered astronaut. Though 95% of the film takes place within the space capsule itself, director Martin and cinematographer Felix Forest keep the film visually interesting. The plot is quite believable with a strong emotional core, despite the addition of an unnecessary element late in the picture. Capsule is a tense, dynamic, character-driven drama well worth seeking out.

The central conceit of the film is that, in 1959, the British secretly beat the US and Russians to launch the first man in space two years before Yuri Gagarin’s historic flight. Astronaut Guy Taylor (Edmund Kingsley) has the honor of being the first man in space, but he is experiencing serious technical difficulties. His flight suit has suffered a malfunction, leaving him with a reduced oxygen supply. Other technical failures of the capsule add to his troubles. His only companions are a cherished photograph of him and wife Charlotte (Lisa Greenwood) as well as the voices of ground control with whom he communicates via radio. Working with ground control, he tries to get the capsule under control so he does not miss hi re-entry window. Continuing to orbit Earth, he drifts out of range of British radio reception and eventual into Russian airspace. This being the height of the Cold War, the Russians are none too pleased that their airspace has been “invaded”, so they contact Taylor via the radio and demand to know what his mission is. Tensions mount. Taylor has to stretch his oxygen supply while trying to guide his crippled craft home. Will the Russians find some way to interfere with Taylor’s capsule? Will he drift into American airspace, and how will they react? Will his oxygen supply run out before he can guide his crippled ship to land safely and he can return to the wife whom he loves?

A film such as Capsule is essentially a one-man-show, and its success is highly dependent upon the acting skills of the lead. Edmund Kingsley, who plays Guy Taylor, is well up for the task. Having only disembodied voices on a speaker to act against, Kingsley still provides engaging conversation with his unseen allies and antagonists. Not only does Kingsley have to carry the film himself, he is also greatly limited in his use of body language. His character is strapped into his chair, reducing his movements to facial expressions and use of his head, arms, and upper torso. Even with these restraints, Kingsley conveys a wide range of emotions. The love he feels for his wife comes through from simple glances at her photo; the desperation and fear for his own safety is displayed through his eyes. One would think that an actor would be tempted to over emphasize his movement when his has such a limited range of motion, but he keeps his acting restrained (no pun intended) and naturalistic. Kingsley makes “Guy Taylor” feel like a real person with real emotions. The audience likes Guy, sympathizes with him, and wants to see him return home safely. It is an excellent performance and strengthens the audience’s emotional involvement in the outcome of the story.

Edmund Kingsley’s top-notch performance is not the only thing for which to recommend the film. Andrew Martin’s direction and Felix Forrest’s cinematography make great use of a seriously limited set, giving the film a dynamism that one would not expect in such tight quarters. It is truly amazing how many different camera angles they are able to achieve in such a limited space. This never gets gimmicky nor does it feel gratuitous; their shot choices feel natural. Credit is due film editor Jan Hillman for cutting all of this together in such a way that flows extremely well, never bringing attention to technique. Guy’s exchanges with the various ground control groups are handled by cutting between Guy, the radio speaker, and relevant capsule details. Hillman cuts these scenes as if they were between two people in the same room, giving them the feeling of real and natural conversations. Adding further interest to the film is the changing lighting. As the capsule orbits the Earth, it passes from the daylight into Earth’s shadow. This allows the filmmakers to change up lighting for dramatic effect while still making logical sense within the narrative. While 95% of the film does take place within the capsule, there are some nicely done external shots of the capsule, helping to sustain the feeling that this truly is taking place in space. Additionally, the denouement of Capsule is a several minutes long steadicam shot. Not only is the shot technically impressive, it is woven into the story in such a way as to help build suspense leading to the resolution of the film. The technical expertise of the filmmakers makes Capsule a pleasure to watch.

The story of Capsule, while fictional, is completely believable. The audience can easily suspend their disbelief and accept that the British had a secret space program that launched a man into space two years before the Russians. The film feels very grounded in reality, from the early space race technology of the capsule to the Cold War paranoia of the various ground control crews. Perhaps the film should be labeled “alternative historical drama” instead of “science fiction drama”. The Cold War features very prominently, with the British astronaut’s fate mirroring that of Great Britain – an ally with the United States, but still feeling like someone trapped between two superpowers playing a private game. The only quibble with the plot is that one unnecessary element is introduced near the end that all but negates the emotional core of the film. While not a “fantastical” element, it feels contrived and slightly weakens an otherwise excellent story.

Capsule is an outstanding and engaging film. Buoyed by a strong and naturalistic performance from Edmund Kingsley, it draws the viewer in and keeps them fully invested in the central character’s fate. The filmmaking team of director Andrew Martin, cinematographer Felix Forrest, and film editor Jan Hillman do a wonderful job of keeping the film dynamic and visually interesting, in spite of the fact that their subject is strapped to a chair in the middle of a very cramped set. The story feels like it could have really happened, enhancing the viewer’s concern for Guy’s fate.Capsule is an engaging, suspenseful, character-driven drama with a strong emotional core that should be on everyone’s radar. 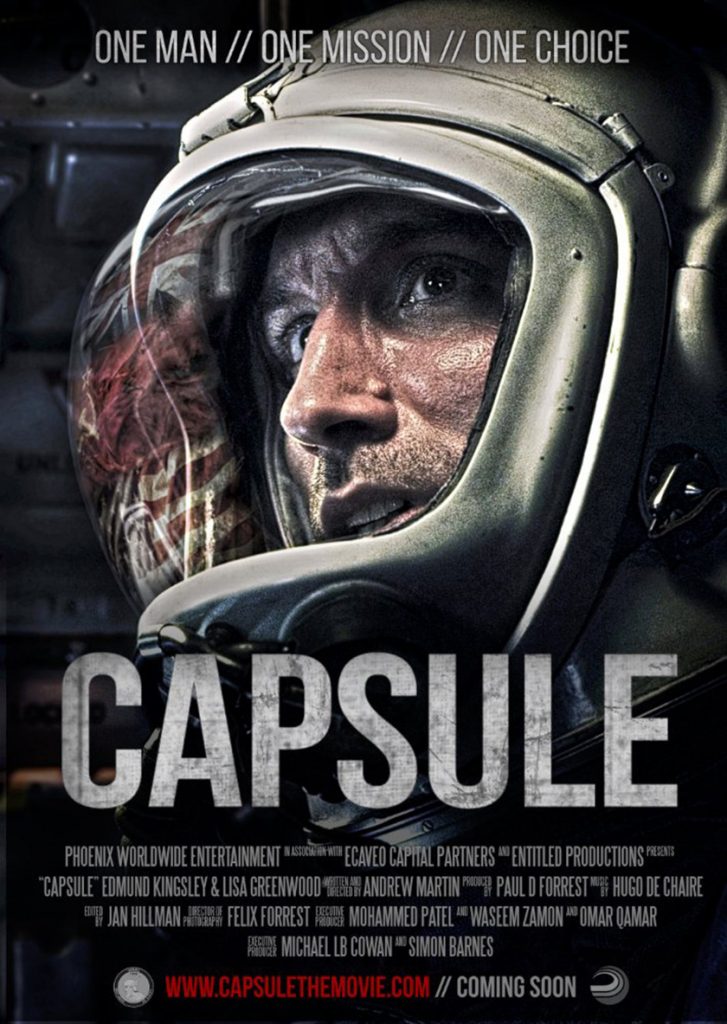 Brea Grant is an actress well known to horror film fans for her roles in such films as After Midnight, Beyond the Gates, and Dead Night. She is also an […]

In horror, it is often stated that what is implied is more frightening than what can be seen explicitly. Writer/director Nicolas Pesce embraces this philosophy in his directorial debut The […]

SF IndieFest’s Another Hole in the Head Film Fest celebrates its 16th anniversary this year with a December 1st –15th run at New People Cinema in San Francisco’s Japantown. According […]