“What the heck did I just watch?” Sometimes one finds oneself asking that after viewing a film – and that is not necessarily a bad thing. When a filmmaker is shooting for the surreal, this is often the desired response. Such is the case with Bloodsucker’s Handbook (GenreBlast 2016), which showed at the inaugural GenreBlast Film Festival in Culpeper, Virginia the weekend of 2016 Aug 19-21. Writer/director Mark Beal spins a tale of a priest that is called in by the authorities to help interrogate a captured vampire and to translate the book he has written, the Bloodsucker’s Handbook. After the vampire escapes, the priest is drawn into the increasingly bizarre underworld of the city in his pursuit of the truth. The film’s sense of the surreal is enhanced by the use of stop motion puppetry for some sequences, and even for a supporting character or two. Strong performances by the leads keep the viewer invested, and clever film noir homages are combined with a do-it-yourself aesthetic to bring a charm to this weird and fun little oddity. While those looking for a straight horror film may be left scratching their heads, fans of the weird will not be disappointed. 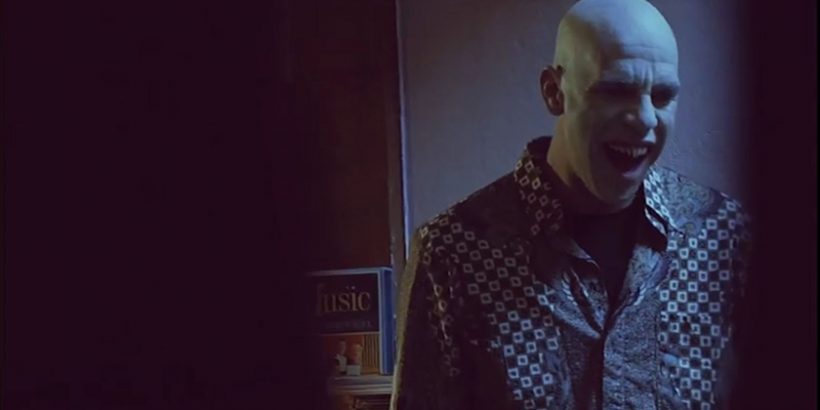 Okay. I will do my best to give a synopsis of this film, but that will be like trying to summarize a painting by Dali. Father Noah (Cory W. Ahre), a Catholic priest, is called in by the authorities to help with a recent case. They have captured a man, Dr. Condu (Jeremy Herrera), who appears to be a vampire. In his possession is an odd handmade book written in Latin. Father Noah tells the federal agents that the book is titled “Bloodsucker’s Handbook” and appears to be a secret history of vampires. Father Noah is sent into a darkened room to interview Condu, who is locked up Hannibal Lecter style. Condu relates the history and origin of the vampires, which is depicted with stop motion animation. After Condu escapes, Father Noah is finds himself questioning his faith and sanity as he descends into the strange underbelly of the city where he meets a mysterious woman from his past, more vampires, a nurse who treats toad licking addicts, and a hard-boiled private detective with the head of a dog. Then things really start to get strange. 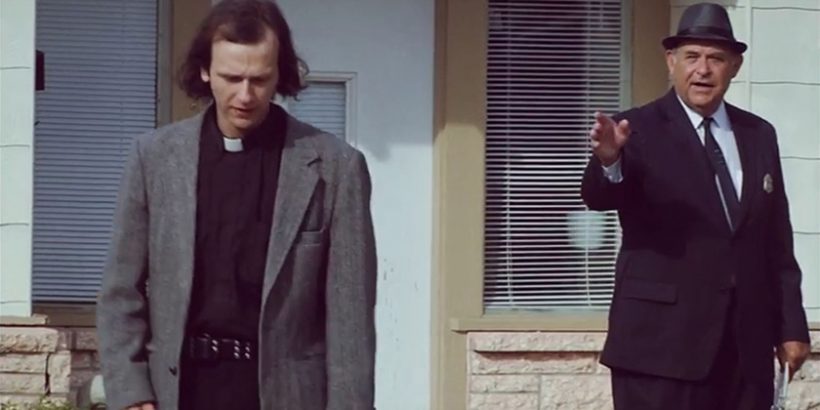 Writer/director Beal has stated that he did not set out to create a vampire movie, but instead intended to create a surreal movie with a vampire. He succeeds on all counts. Bloodsucker’s Handbook starts out odd, but still feeling relatively grounded in the real world (well, aside from the presence of a vampire). Little oddities start trickling in, such as the strange but effective stop-motion sequence where Condu narrates the story of Vlad Tepes and the creation of vampires. As the film progresses, the filmmakers slip in more and more bizarre details. Vampires with baboon sidekicks and a clinic for toad lickers are just some of the oddities encountered. By the time Father Noah meets and joins forces with the private detective Valentine, the audience is fully able to accept the fact that Valentine just happens to be a stop-motion puppet of a two legged dog in a trench-coat. The film has a wonderful dreamlike quality. The budget is low and the seams show around the edges, but this adds to the film’s charm and it surreal nature. The film’s tagline is “Embrace the Weird,” and the filmmakers certainly did just that to great effect. 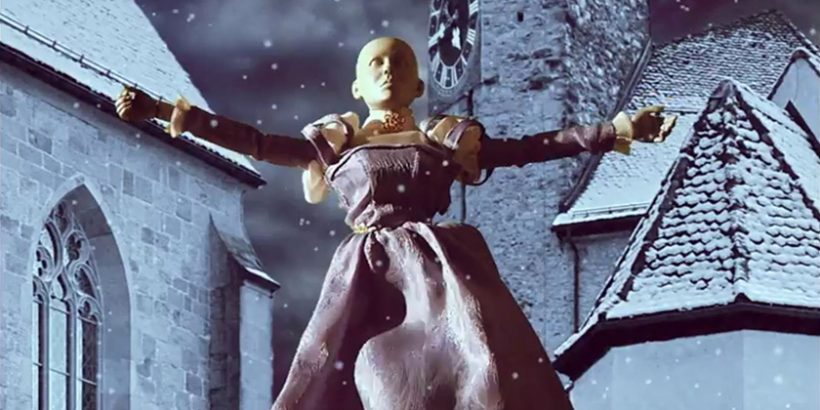 Strong performances by the two leads, Cory W. Ahre (Father Noah) and Jeremy Herrara (Condu), help provide an anchor for viewers in the midst of the surreal world that the filmmakers have created. Ahre’s understated performance works perfectly for his character. He portrays Noah as a man who is wrestling both with his faith and his sanity. It is a quiet performance, with much of the emotion and detail carried through Ahre’s facial expressions. One can easily believe that Father Noah is a man stuck in a nightmarish world and who is just trying to do his best to get by. When he does let loose, it is as a man who has reached his breaking point. The film’s main villain, the vampire Condu, is played strikingly by Jeremy Herrera. In the earlier scenes, where he is the captive and Father Noah is the interrogator, Herrara gives Condu a sense of restrained power. One gets the feeling that Condu could easily break his restraints but is holding back for his own reasons. He imparts Condu with such a strong personality that one can still feel his presence and influence even when he is not on screen. Though he is missing for much of the middle of the film, Herrara’s Condu sets up the feeling of menace and madness that lingers through the rest of the story. It is easy to see why Herrara won Best Actor in a Feature Film at the inaugural GenreBlast Film Festival. 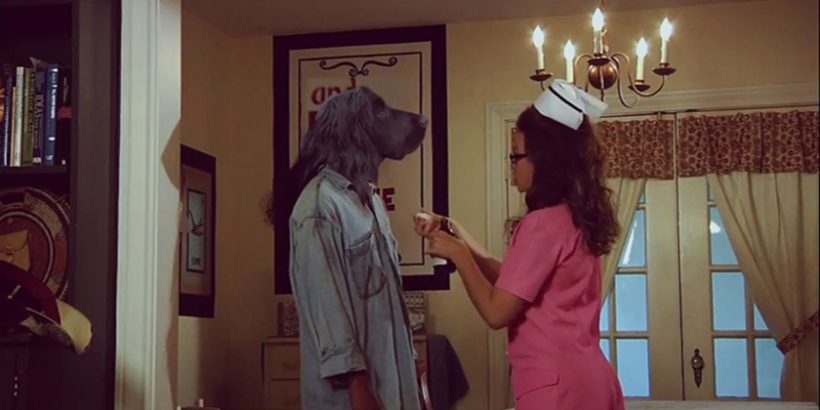 The overall feeling of Bloodsucker’s Handbook is that of film noir that has been put through a surreal filter. The films fits the classic noir story of a man drawn into the dark underbelly of the city. Noir tropes such as drugs and alcohol, mysterious women, dark alleys, betrayals, and even a hard-boiled private detective all figure into the film. It is just that writer/director Beals gives these elements a surreal twist – the drugs are toad licking, the mysterious women are dancing with pterodactyls, the dark alleys are populated with a vampire and his baboon sidekick, and the detective is a dog. The jazz score is both evocative of last 1950’s noir films and free form enough to mirror the surreal side of the film. Beal makes good use of the cinematic language of film noir, such as deep shadows and often framing his characters in door frames and hallways. Beal’s decision to give the film this surreal / noir mashup tone is an excellent choice. Noir films often have the feeling of a quiet nightmare where things go downhill for the protagonist, and this melds well with the dreamlike qualities of surrealism. The two styles compliment each other, and Beal does a nice job of combining the two effectively. 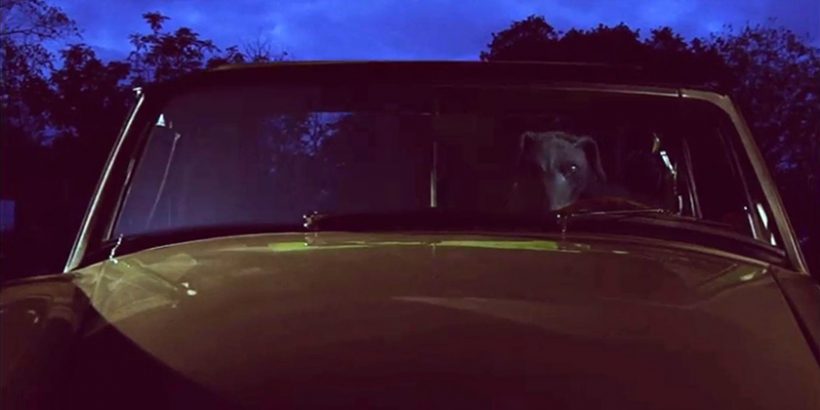 Writer/director Beal has crafted a fun and interesting surreal / film noir mashup (with vampires!) in Bloodsucker’s Handbook. It starts out only slightly odd and slowly draws the audience into its increasingly surreal world. Good performances by the leads, most especially Jeremy Herrara as the vampire Condu, help keep the viewers engaged and anchored amidst the madness. It may be a little rough around the edges, but that only adds to its quirky charm. Fans ready to “embrace the weird” will find much to enjoy in this neat little indie oddity.

The classic western is a genre that comes into and falls out of favor regularly. By that I mean it isn’t a genre that you’ve seen gracing the big screen too often as of late. But every so often, a western hits a nerve and becomes something that’s on everybody’s radar. Tarantino’s The Hateful Eight […]

Australian short film Little Lamb is a gothic thriller that takes place in a world that is bleak, both in the landscapes in which its protagonist Louisa is trapped and in her chances of improving her life – or even continuing it beyond her young age. Writer/director/editor Heidi Lee Douglas’s film is set in 1829 […]