New Orleans has an interesting history with innumerable stories to tell, both true tales and local legends. Dinner with the Alchemist (GenreBlast 2016), which was shown at the inaugural GenreBlast Film Festival in Culpeper, Virginia, combines many of these legends and true accounts to present an entertaining tale of murder and mystery in New Orleans at the turn of the twentieth century. Screenwriter Jenna St.John takes story threads that may appear unconnected at first and weaves them together into complete and satisfying supernatural thriller. Strong performances by the leads help foster sympathy for their characters, and the filmmakers strike a nice mix tonally, balancing mystery and menace with lighthearted moments. The end result is an entertaining evening of murder and mayhem in the French Quarter.

It is the turn of the twentieth century in the French Quarter of New Orleans. The city is in the midst of a deadly plague and bodies wrapped in sheets are quite literally piling up in the streets. Marie Laveau (Dionne Audain), granddaughter of the famous voodoo priestess of the same name, and her niece Louise (Marly Chaudry) sell love potions and more to the local population, but they claim there is nothing they can do to help curtail the disease. The mysterious alchemist Jacques St. Germaine (Dan Istrate) moves to town and strikes up a friendship with Marie. He suggests that, between the two of them, they should be able to figure out how to end the pestilence. Meanwhile, Mary (Megan Graves) is a young woman who has been orphaned by the plague, and she finds herself working as a maid/helper at one of the French Quarter’s brothels. When she is pressed into full service at the brothel, she develops a relationship with one of the patrons, Oliver Carter (Chris Stinson), a young sailor in town to visit his two cousins, John (Josh Adams) and Wayne Carter (Richard D. Busser). It turns out that disease is not the only thing plaguing the city; bodies are beginning to turn up killed in a ritualistic manner and drained of blood. Are these killings the work of a madman, or do they hint at something more sinister, and possibly supernatural? While police inspectors McMurphy (Regen Wilson) and Jenkins (Clayton Farris) do their best to try and unravel the mystery, St.Germain seeks the help of Marie Laveau in putting an end to the killings.

Screenwriter Jenna St.John packs lots of stories into Dinner with the Alchemist’s 99-minute runtime. She uses New Orleans’ rich culture and legends as a starting point for her tale of death and mystery. To this, she adds intriguing details that she has taken from actual news reports from the city’s history. Some of the more intriguing details that one would think were from the legendary side of things, e.g. piles of dead prostitutes found in a church, young women falling from the sky, are actually from contemporary press accounts. At first, the different story threads appear to be only tangentially related, but as the film progresses, they begin to converge; in the end, they come together in a coherent and satisfying whole. One or two of the subplots do come across as a bit underdeveloped, but one gets the feeling that their complexity may have been sacrificed in the interest of keeping the film to a manageable length. One gets the feeling that this could easily be expanded to a 6 to 8 episode Netflix-style series, elaborating on the many subplots. There are tantalizing hints at other, deeper tales here, which give the film a delightful richness.

Dionne Audain (as Marie Laveau) and Dan Istrate (as Jacques St.Germaine) lead a mostly strong cast. They bring a depth and complexity to the shifting relationship between Laveau and St.Germaine that is believable and interesting. They are both allies and professional rivals, and this tension is easily felt through their strong performances. Audain’s Laveau is a woman who is aware of, and a careful steward of, her family’s unique reputation in the city. While powerful herself, you can feel her sense of self-doubt when faced with the plague about which she feels she can do nothing. Istrate’s alchemist St.Germaine is a powerful and enigmatic figure. He exudes a confidence and charisma central to the success of the character. The viewer feels a sympathy for him while also getting just a hint of menace (perhaps). While not all of the cast is quite as strong as the leads, they are, as a whole, quite good with standout performances by some of the supporting players. Chris Stinson is enjoyable as the wide-eyed and inexperienced young sailor Oliver. He brings a fun innocence and shy awkwardness to his character. Regen Wilson and Clayton Farris give their portrayals of Inspectors McMurphy and Jenkins a light-hearted tone without turning them into stereotypical “bumbling cops”.

One would think that a film that combines a plague and a ritualistic killer would be overly dour, but Dinner with the Alchemist avoids this fate. Instead, director Kevin Good brings to it a tone that is a nice mixture of mystery and menace with lighthearted touches that keep the whole affair from being overly dark. The humorous moments feel natural to the story and do not feel shoehorned in. For example, there is a (mostly) chaste and tasteful scene of a fumbling encounter between a virginal sailor and a first-time prostitute. The scene easily could have been uncomfortable, but instead, the filmmakers present it in such a way that it helps endear both characters to the audience and comes across surprisingly sweet. These moments help humanize the characters. The audience sympathizes with nearly all of the characters. In the end, when the villain of the piece is eventually revealed, the audience has developed a connection with them, bringing an emotional complexity to the resolution.

The French Quarter of New Orleans at the turn of the twentieth century is a great setting for tales of supernatural and mystery. Screenwriter Jenna St.John and director Kevin Good take full advantage of this setting to tell an intriguing tale of murder and mystery at the turn of the century. The film has a depth and richness that makes the viewer feel as if there are more stories to tell. Strong performances by the leads keep the audience invested in the outcome of the tale. Striking a nice tonal balance between menace and lighthearted moments, the film treats the viewer to a satisfying tale of mystery and murder in old New Orleans.

Dinner with the Alchemist 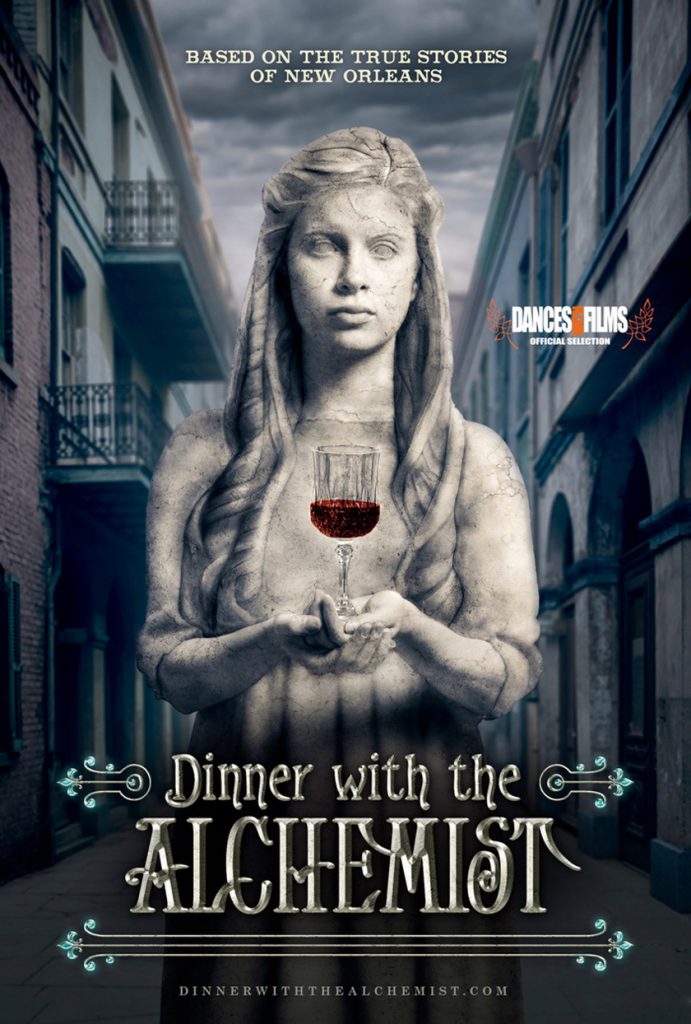 Y’know, I’ve never been a fan of whatever production company The Asylum puts out, or should I say belches forth? Long known to create quick, cheap knockoffs of forthcoming blockbuster films in order to jump on the bandwagon and possibly steal a few quick DVD sales from confused foreigners, The Asylum traffics in the lowest […]

I have always been a fan of Edgar Allan Poe though not a die-hard fan,  only  a casual one. I do have a collection of his works but have not read all of them as his writing style at times were a little hard to read. Personally, I always preferred his spiritual successor H.P. Lovecraft […]