Welcome back Grue-believers! It’s that moment we’ve all been waiting for: your resident thug begins his reviews of the anticipated return of The Walking….oh wait I’m getting way ahead of myself, that’s not until October 23rd. Time to bring ourselves back down along with our expectations, it’s the premiere of the second half of Season 2  of Fear the Walking Dead. This could be a good or a bad thing depending on your view of the first half of the season which as Santos says “I didn’t hate.” Without any further ado, let’s review episode 8 titled “Grotesque”.

Being the first half of the season ended with much flair  having  Daniel (Reuben Blades) setting fire to the Abigail estate. It also had  the crew of Madison (Kim Dickens), Strand (Coleman Domingo), Ofelia (Mercedes Mason), Alicia (Alycia Debnam Carey) pleading with Nick (Frank Dillane) to get in the truck and head back to the boat. Nick decides to make a go on his own as he has fallen under the spell of Celia (Marlene Forte). He  believes that walkers are people too and should not be annihilated. Meanwhile, Travis (Cliff Curtis) and his annoying son Chris (Lorenzo Henrie) need some daddy-son time to deal with Chris’s psychotic episodes. As we know, Travis is not quite the role model I’d be looking for, so this should be fun. I grabbed my popcorn — actually, it was a cannoli my wife got for me — and settled in for….mediocrity. 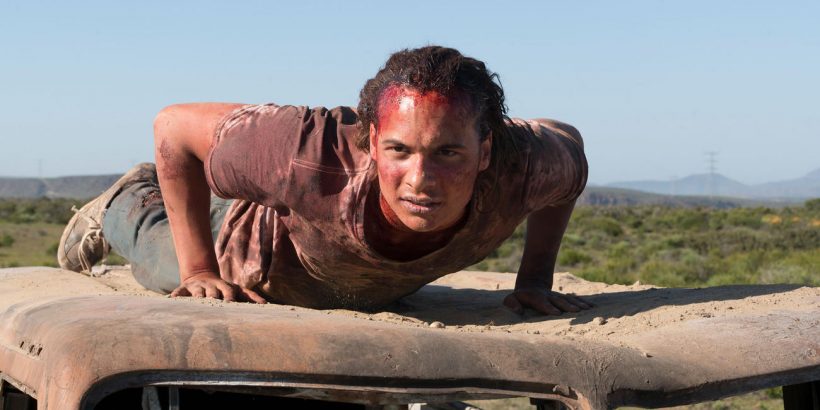 Yes, my friends, I said “mediocrity.” What I thought I was going to get, I didn’t. Instead, I  got a whole episode of Nick with some backstory. Remember in the pilot episode where Nick woke up in a graffiti filled abandoned building looking for his girlfriend Gloria (Lexi Johnson) and eventually found the zombified version of her? Well, we get an introduction to her in this episode.

The episode began with Nick waking up in Sofia’s (Diana Lein) home while her son Juan (Moisses Arath Leyva) plays outside with a soccer ball. Sofia is a friend of Celia’s and apparently let Nick crash at her place along with two dead bodies on the floor. Nick said his goodbyes as they left in search of Juan’s father and Nick continued the 100-mile trek to Tijuana. As Nick begins his travels we get a few flashback to when he was in rehab with Gloria and she is she takes on the role of his father and encourages him to open up in preparation for a session. We do find out here that Nick has some major daddy issues which probably contributed to his addictions. Nick holds a major grudge with his dad for being absent in his life. In a later flashback, we get Madison coming into the rehab to inform Nick that his dad was killed in a car accident which caused him to break down. 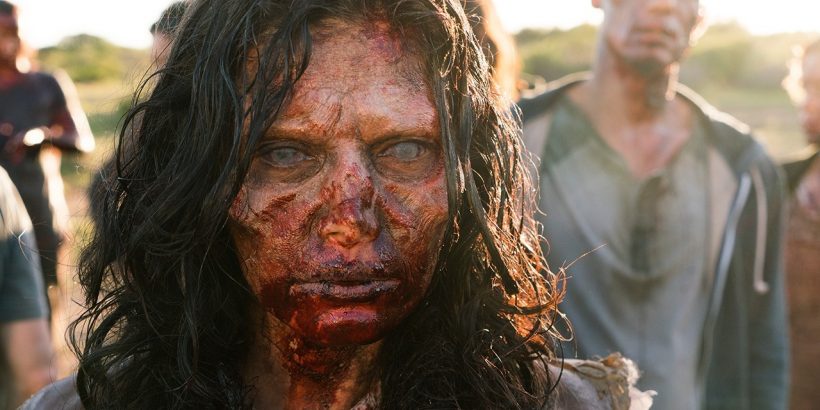 As Nick continues his trek, he stops for some water he sees in a car with a walker (in this case a sitter) strapped in her seatbelt. He also takes a radio from the vehicle and turns it on in search of any news he could find. At this point, a jeep rolls up with three men in it, They  get out armed with  guns in order to  examine the area. Nick hides behind the car. The radio crackles, getting the men’s attention. Nick begins to run into the woods as the men open fire on him. I did get some comic relief at this point, What was up with the way Nick runs? I don’t know if any of you have ever seen the episode of Friends (yes that’s right I’m a fan of Friends) where Rachel (Jennifer Aniston) refuses to run with Phoebe (Lisa Kudrow) due to her erratic, flailing running style. Well, that’s how Nick ran.

Nick eludes the shooters making it a dessert. He attempts  to get nourishment from a cactus to no avail. Nick decides, due to his unquenchable thirst, that he is going to drink his own piss. Did we really need to get the camera close up of his reach inside the zipper? Eventually, night falls and a freezing Nick finds slumber. He wakes up in the morning to discover two hungry dogs eyeing him as a meal. As he makes his escape to the top of an abandoned vehicle, one of the dogs takes a chunk out of his leg. Just in the nick of time, a group of walkers appears and the dogs attack them but become supper for them instead. Later, Nick, as well after the walkers, are distracted  by the sound of gun-shots in the distance. Nick steals a belt from a crawler (a walker with no legs) and uses it as a tourniquet. He covers himself in blood and guts and travels with the pack of walkers. As he walks with them, he is hallucinating that one of the walkers who looks like Gloria is talking to him. 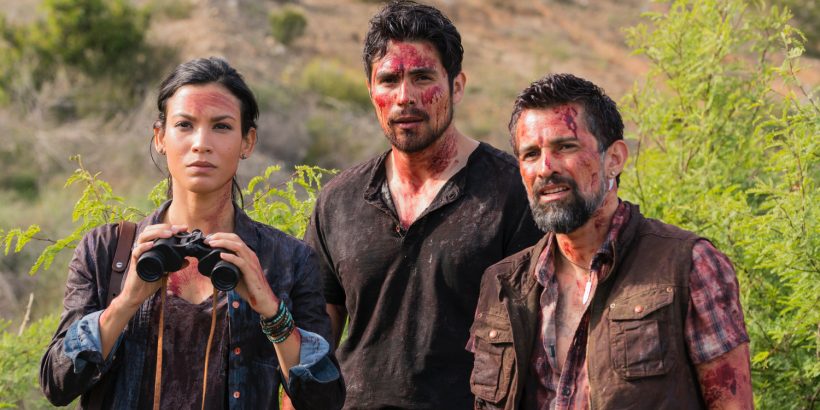 Eventually, the pack comes face to face with the three gunmen again. They begin to take out the walkers one by one just as the leader recognizes Nick. He drops his bullets and, in the calamity, he becomes dinner along with one of the others as the third one jumps in the jeep and leaves. After the exchange, Nick collapses due to fatigue and blood loss as a woman, Luciana (Danay Garcia) and two men watch from a hill. Luciana wants to leave him but one of the men convinces her to come to his aid. As Nick lays there unconscious, we get another flashback which appears to be prior to the timeline of the pilot episode at the moment where Nick and Gloria are shooting up in the abandoned building.

Nick awakens in what may be the first make-shift community in The Walking Dead universe. Alejandro (Paul Calderon) who is the community physician treats Nick and invites him outside to enjoy the community which has a set-up including everything from a marketplace to soccer nets and a heavy bag. 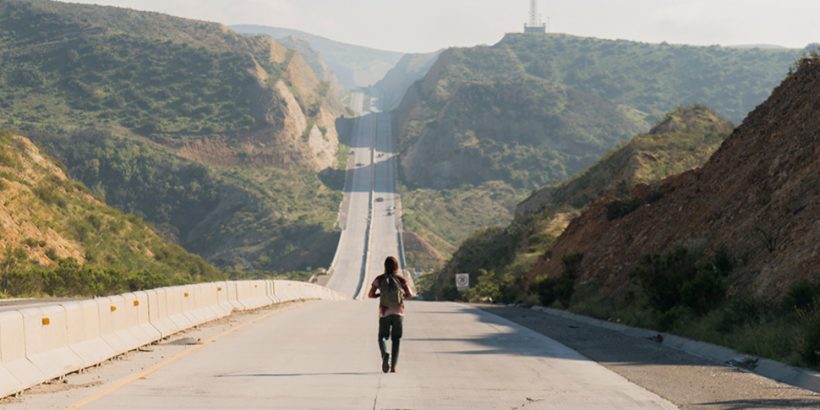 “Grotesque” was written by Kate Barnow and directed by Daniel Sackheim. Was it a great episode? Nope. But again to quote Santos, “I didn’t hate it.” I was just hoping for a little more continuation from the other characters. It looks as though Fear the Walking Dead will continue to take cues from its predecessor The Walking Dead and focus in on certain people and groups weekly. That is not necessarily a bad thing as long as the episode is worthy of taking on that style of storytelling which this one attempted to do.

Here it is Grue-believers! The moment we’ve all….well at least I’ve been waiting for…the season finale of Fear the Walking Dead. The only thing that would be better is if it were the series finale! After the strong note with the previous episode, Wrath, I was expecting quite a bit from the finale. Well, I […]

As we all know season 2 of Fear the Walking Dead is leaps and bounds better than season 1; however, that is not saying much. But, in all honesty, I have to say that I am at least half enjoying the season. It is still nowhere near its companion show but as this season is […]

First of all, apologies  for the double review for the final two episodes of Ash vs the Evil Dead. I got caught up in New Years plans and work, forcing me to combine these two into one article. Plus, as  I was trying to write about “Bound in Flesh”, I honestly couldn’t find too much […]