With a name like Creature Feature, you might assume you’re in for a pastiche of a late-night, Saturday horror movie, complete with a local cast introducing that night’s feature and performing mini-skits during commercial breaks.  At least that was my presumption. However, what the viewer gets is an anthology film straight out of EC Comics with similarities to Creepshow (1982) with a twist. As in Creepshow, comic book panels are used as segues into each story and transitions between some scenes within a  story. In this case, the comic book in question is titled Creature Feature and makes multiple appearances in the movie, both lying on furniture within a scene and as a transitional device. But the filmmakers are not content with this one technique to transition between segments. The stories are also tied together by a group of attendees at a Halloween party trying to outdo each other by telling scarier and scarier stories. The aforementioned twist is that all of the segments turn out to be fragments of one, somewhat disjointed, overarching story told in a Pulp Fiction, non-linear style.

Written and directed by Chase Smith, Creature Feature begins with a short introductory piece derivative of Ignacio F. RodÃ³’s one-minute short, Tuck Me In (2014). In this case,  a father, played by Smith,  is asked by his young son to check for monsters under the bed. This short is a little longer than Tuck Me In and takes the conclusion an unnecessary half-step farther in a predictable postscript.

Next we move to Cola (Becca Beton) and Tucker (Michael Maponga) rolling up to the Halloween party with an announcer on the car radio explaining how a dense fog  is prohibiting law enforcement from searching for the suspect in a quadruple homicide and warning everyone to stay inside until the fog lifts. The pair meet up with their friend Jackson (Lance Paul) and after entering the party, the trio soon gravitate to Anna (Giana Alexis Cambria), Becca (Niki Edwards), and Mandy (Cameron Gagne) who are alone on one side of the room, dressed in sex-exuding, school girl costumes. After the three women reveal that they have been telling ghost stories full of monsters, demons, and sex, Tucker, Jackson, and later Cola try to outdo each other and impress them with their own tales. 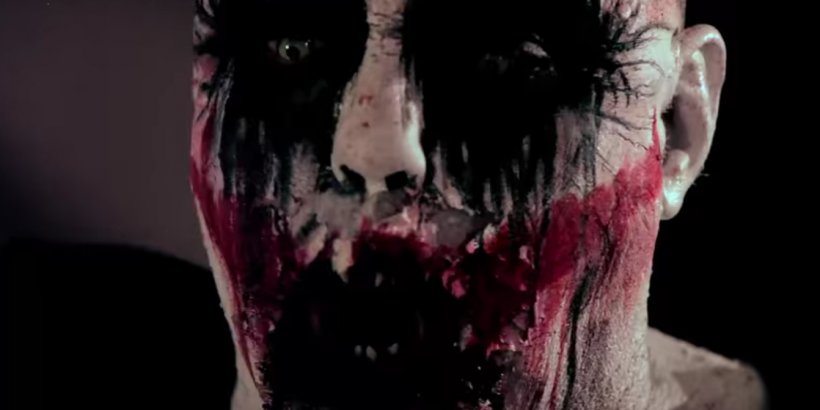 First, Jackson tells the story of a babysitter’s encounter with a clown statue. The parting warning given by the father (Jason Vail) to the family’s babysitter, Rachel (Christina Klein), is that lately, his kids have been having nightmares about a clown in their bedroom, so please don’t let them watch any scary movies. Shortly after the parents leave, the kids go right to their bedroom to watch a scary movie of course, and Rachel notices a life-sized clown statue in the corner of the living room. It’s no wonder they’re having nightmares about clowns, she thinks. Later, after her boyfriend (Austin Freeman) comes and departs, she calls the kids’ father to tell him the clown statue is giving her the creeps and to ask if she can cover it up. He receives her phone call just as he is taking care of some business. Angry with the interruption, he informs her that there’s no clown statue in his house and hangs up. From there on, things do not go well for Rachel.

In sequence, we are then treated to stories about six members of a family performing a satanic ritual to give thanks to Samhain for the riches they’ve received in return for sacrificing their father/father-in-law; a connection between the lost Roanoke colony/Croatoan legend, Spring-heeled Jack (Jason Vail), Halloween, three witches, and the fog; a possessed scarecrow terrorizing two couples in a cabin; a psychopath beginning to defile and disfigure a bound woman  but instead receiving his just deserts at the hand of a kindred spirit; and  a younger couple who are enticed to bring back some proof that they’ve entered the haunted house of the murderer, old man Chaney (Allen O’Reilly), in return for a ride. In a final segment, all the individual stories wrapped up and tied  together with  great big bow.

Throughout the movie, characters appear in multiple, interconnected story segments that eventually coalesce into one overarching, multifaceted tale that does indeed contain monsters, demons, sex, and more sex. Throw in copious amounts of blood and Creature Feature has a definite Grand Guignol feel to it. There are clues interspersed in the different segments that foretell the manner in which the stories are tied together, but it is only in hindsight that I understood their significance. 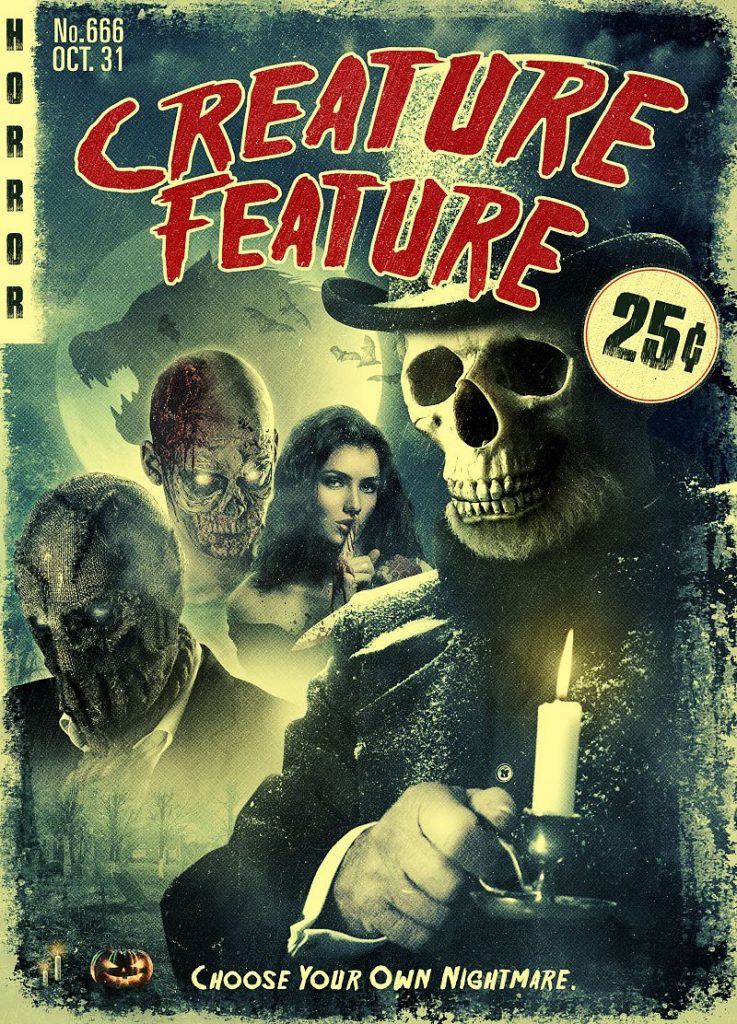 The practical effects are a big plus in Creature Feature  and thankfully there are no buckets of CGI blood. There’s nothing fancy here, but it is effective. There’s a few places where the viewer glimpses the man behind the curtain, or in this case, a creature’s makeup or mask. However, for the most part, these glimpses do not detract from the film. The one exception is the makeup for Spring-heeled Jack. In particular, his sideburns are off-putting and I found myself staring at them to distraction, rather than following the story developments.

The actors, as a whole, do a fine job. One of the highpoints is Michael Steigler, who plays the clown. At first sight, the clown is rather mundane and unimpressive, but a later incarnation is genuinely scary and his laugh is positively hair raising.

The soundtrack is also a big plus. Much of the music is delivered by Fatcastor, the band at the Halloween party that doubles as the background for the telling of the ghost stories. Add a couple songs from Rusted Soul and an appropriately placed blues tune by Mark Cook and you have a very nice soundtrack that adds to the atmosphere and feel of the movie.

Creature Feature’s biggest distraction is the patchwork nature of how the story is pieced together, clouding the continuity. There is a coherent story that ties all the pieces together, but it’s difficult to grasp. There’s one line in particular that explains a lot of the reasoning behind the goings on but it’s easy to miss. There’s also the boy in the short opening segment who’s billed as Young Jackson. Given what takes place in the opening segment, an explanation of how adult Jackson actually became an adult would be welcome. As is, the opening segment just sort of sits there with no apparent connection to the rest of the story.

All in all, even though some of the trappings of a low budget, independent movie are present, Creature Feature delivers and does indeed feature many creatures. It’s unquestionably a fun watch. I give it 3 out of 5 stars. But that’s just me.

“Victor Frankenstein” (2015) – A Cobbled Together Creature

Mary Shelley’s Frankenstein  has been reinterpreted countless times.  Just in terms of cinema, the tale of man playing God has been adapted endlessly  since the Thomas Edison produced short silent film version in 1910. Now over 100 years later, we have  Victor Frankenstein, a 21st century revamp of the iconic tale from director Paul McGuigan […]

Seduction of the Innocent: The Gruesome Magazine comic review of  ” Harrow County” Volume one from Dark Horse Comics. To say that Cullen Bunn’s  Harrow County  is a southern gothic horror story doesn’t really do it justice. To me, it is so much more. It reminds me of home. Growing up, I came from a […]

[Review] The Obliteration of the Chickens (Popcorn Frights): Izzy Lee Tackles the Horrors and Humor of an Uncaring Universe

If you are in the mood for a brain-bending dose of existential angst and nihilist musing — and if you are not, what’s holding you back? — you need look no further than prolific filmmaker Izzy Lee’s The Obliteration of the Chickens. It is unlike any of Lee’s other works, tackling the senselessness of it […]

On this episode of Horror News Radio: The Grue-Crew review… HANNIBAL (2013) Season 1 Episode 7 – Sorbet. Be sure to subscribe to the Gruesome Magazine YouTube channel to catch all the HNR episodes. And check out Patreon to see how to watch the recordings live! This is HORROR NEWS RADIO, the official GRUESOME MAGAZINE […]

On this episode of Horror News Radio: The Grue-Crew review… LOVECRAFT COUNTRY (2020) Season 1 Episode 5 “Strange Case” Be sure to subscribe to the Gruesome Magazine YouTube channel to catch all the HNR episodes. And check out Patreon to see how to watch the recordings live! This is HORROR NEWS RADIO, the official GRUESOME […]

Tonight, we review NO ESCAPE (2020). Doc Rotten from Horror News Radio. Jeff Mohr from Decades of Horror: The Classic Era. And Crystal Cleveland, the Livin6Dead6irl from Decades of Horror: 1980s share their thoughts about this week’s awesome collection of streaming horror films. Joining the crew is Horror News Radio co-host, Dave Dreher! Join the […]

“She eats unmarried young girls. It is the only time she can wear her wedding gown.” Cool! Sounds like a great place to spend your summer vacation. Join your faithful Grue Crew – Doc Rotten, Chad Hunt, Bill Mulligan, and Jeff Mohr – as they ride the bus to Auntie’s and try to avoid the […]

“I have conquered science! Why can’t I conquer love?” That’s the age-old question, isn’t it? Join this episode’s Grue-Crew – Whitney Collazo, Chad Hunt, Joseph Perry, and Jeff Mohr – as they show some mad love for Peter Lorre’s performance in Mad Love (1935). Decades of Horror: The Classic EraEpisode 81 – Mad Love (1935) […]

The Grue-crew head to South Africa (virtually, of course) for a special interview with an up and coming new director. Joining the crew is director Ryan Kruger, the madman behind the unbelievably insane FRIED BARRY. Listen in on an in-depth discussion on what inspired the film, how it got made, and the man behind Fried […]

Welcome to HEROES & DROIDS, your guide to pop culture movies and TV! This week we review… BILL AND TED FACE THE MUSIC (2020) On HEROES & DROIDS, we discuss pop culture about Superheroes, Sci-Fi, Disney, and Action. From Marvel to DC, from Star Wars to Star Trek, From James Bond to the Fast and […]

On this episode of Horror News Radio: The Grue-Crew review… LOVECRAFT COUNTRY (2020) Season 1 Episode 4 “A History of Violence” Be sure to subscribe to the Gruesome Magazine YouTube channel to catch all the HNR episodes. And check out Patreon to see how to watch the recordings live! This is HORROR NEWS RADIO, the […]