Adult animation isn’t often that adult. Sure, we’ve had animated subjects that often take on darker themes. But it’s usually for a more satiric comedic subversion of usual expectations. People laugh at the kids from  South Park  because they’re doing things children would never do, for example.  Oddly, the most complex material today animation wise tends to be content that attempts to please a wider audience, utilizing the kid friendly trappings to discuss big issues. This can be found in most of the better Pixar films or with modern animated shows like  Adventure Time or  Steven Universe. With  Psychonauts the Forgotten Children, there’s a much more direct approach to its darker themes and satiric concepts. Directors Pedro Rivera and Alberto Valazquez  take the approach of the more hard edge animated films. Think more along the lines of Martin Rosen’s  Watership Down, Don Bluth’s  The Secret Of NIHM  or even the graphic novel  Maus  by Art Spiegleman,  where these seemingly adorable animals have a much darker richer histories. They’ve lives filled with regret, drugs and haunting visuals of their inner psyches breaking down as life gets harsher around them. You know… FOR KIDS! 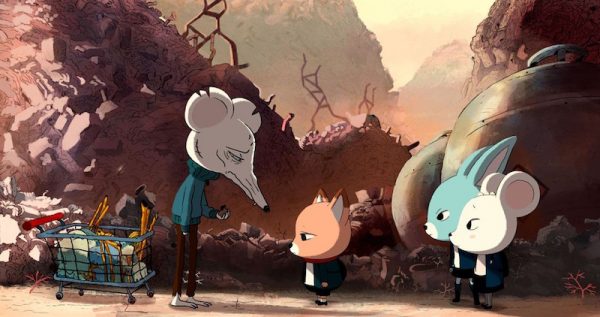 Based on the graphic novel written by Valazquez,  Psychonauts  is set in a world populated by anthropomorphic animals. In a prologue, we see these animals live on an island in a human style society where they mostly walk on hind legs, speak a human language (Spanish, in this case) and work at a dark power plant. One day, there’s a massive industrial accident that scorches the island, transforming it into  a pitiful near-apocalyptic environment with constant grey skies and not much of any life left. We follow several different characters working through their own personal battles . There’s Birdboy, a bird who was the son of a lighthouse keeper turned drug dealer that  struggles with drug dependency of his own. There’s a trio of a young mouse, rabbit and fox trying to escape the doldrums of their lives before getting lost in the garbage dumps populated by murderous scavenging rats. There’s even a young sailor pig bound to the island by his dying mother who’s addicted to the meds that keep her alive. 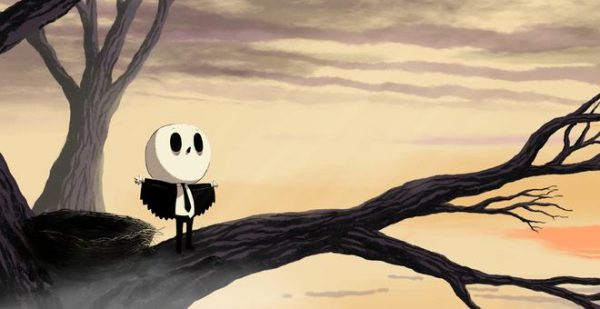 Needless to say,  Psychonauts  isn’t the most happy film out there. The only moments of levity are rather bizarre and dark examples of comic relief. Most of the time, this is a pretty depressing take on human follies, creating a true social satire that examines many a human atrocity. Nuclear explosions, over emphasis on industrial business, drug dependency, suicide, drug trafficking, abandonment, isolation, fear of death, cruelty. It’s all there and in the guise of these animals. The animation does a particularly interesting job of adding human features to makes these animals more inherently relatable. Birdboy’s feather patterns are  designed like a black suit and  his talons look more like human hands  with sharp nails. Some of the characters even have some form of sexual characteristics, as presented when the female mouse character Dinky bathes or puts on her  bra and panties. Mind you, that’s not as potentially pervy as it sounds. Psychonauts‘ use of nudity isn’t graphic or explicitly erotic. It’s there to make a connection that removes some of the facade of the animals.  That’s part of what makes it a true adult animated film: creating relatable adult connections through  a stylized design. 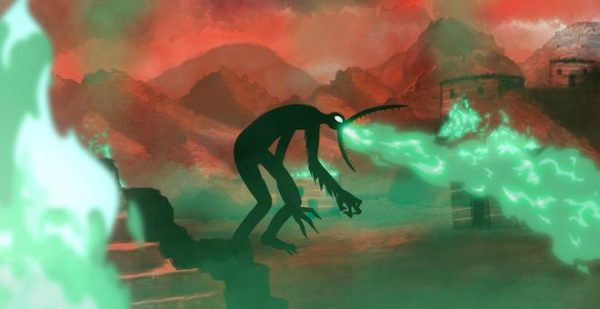 The genre elements of  Psychonauts  are all over the place. Horror fans will love the drug fueled hallucinations of Birdboy or the mutilated looks of the feral rats of the garbage dump. There’s a sci-fi dystopia edge to the entire landscape, with signs  of objects becoming sentient in the wake of the unspecified industrial accident and feeling horrible pain. The fantasy edge of spirituality shows a sense of potential rebirth constantly thwarted by the faults of these characters and the society that’s developed.  Psychonauts  takes place in  an  apocalypse not unlike our modern world. Think a 1979  Mad Max  sort of world that’s  bordering on collapse on  this small island. This cruel environment is  all in service of showing how harshly this world can treat its characters, establishing a constant struggle and sense of dread as these cute looking animals cling on for dear life. Whether the threats to their lives are  directly physical, metaphoric or psychological,  Psychonauts  treats them with a blunt emotional honesty that’s often harsh yet beautiful. 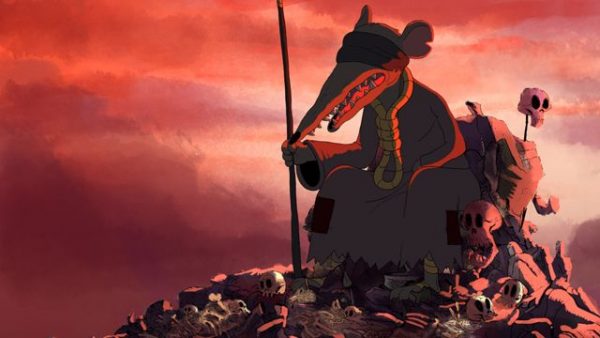 Much like its constantly evolving characters, the animation of  Psychonauts  is fluid. Images morph constantly, shrinking or enlarging for the sake of a dramatic visual. There’s an interesting use of crosshatching to give certain images the familiarity of a bed time story. The comfort that this is a fiction that’ll end up alright. This is of course swiftly subverted with the frank depictions of brutality and death that befall these small creatures  as their destructive sensibilities take hold. Yet, it’s also subverted by the minor creases and bents in the faces of these creatures. We don’t get too much about the romance Birdboy and Dinky previously had  in direct dialogue, but the stream of consciousness backstory shown visually says so much in less than a minute.  Psychonauts  uses this subversive  style to give us a firm realization that things that happen here are final. Every piece of animation that ranges from a monstrous creature growing immensely to the subtle  gesture of Birdboy lighting a cigarette have a human connective point. It removes any doubt that the lives of these creatures mirror our own. 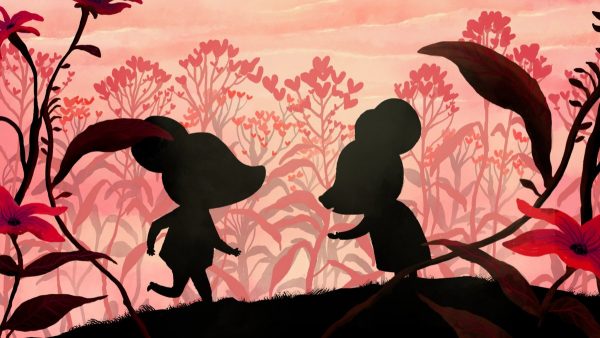 True adult animation is hard to come by when the meaning of “adult” content is so nebulous. Recently, the animated adaptation of  Batman: The Killing Joke  tried to sell itself as adult animation by having the DC characters in sexual and violent situations, but only came off as petty and exploitive.  Psychonauts  avoids this by actually dealing with adult conflicts. With true loss and regret that hurts. I haven’t been extremely specific in this review as to the details of  Psychonauts‘ plot, but that’s only because it makes so much more sense in context. The visual metaphors and brutal actions that take flight in  Psychonauts  aren’t really translatable to words. They live and die in this gorgeous 76 minute long  traditionally animated opus, with a vibrant living world and the characters that populate it. 2D  animation has unfortunately been sidelined  since the dawn of the  new millennium. While the craft and skill used to put together a CG animated film for Pixar or Dreamworks can’t be ignored, the grace and energy of a drawing coming to life as it does here is something entirely different. A three dimensional rendering is inherently more relatable. To get any emotion – hysteria, horror, sadness  – out of a two dimensional drawing is a feat worth praising. And all of the praise deserves to be heaped upon  Psychonauts the Forgotten Children,  an animated  film where the dimension of emotions is far beyond the two used to bring itself to life.

Mummy movies can be a tricky bag. Looking back at cinema history, you may only find a few solid entries: Karloff’s The Mummy; Hammer’s The Mummy with Cushing and Lee; or, The Mummy from the late Nineties. Discerning what makes the creature tick can be an elusive mystery. With The Blood of the Mummy, writer/director […]

I strongly recommend watching U.K. horror short Hungry Joe on an empty stomach. Codirectors/cowriters Samuel Dawe and Paul Holbrook pull no punches in their 23-minute meeting of body horror and family drama, a tale of a child’s insatiable appetite and the trouble it brings to his family. As the short film begins, Craig (Joe Sims) […]