From the title Malatesta’s Carnival of Blood, one might expect a Herschell Gordon Lewis style B-movie gore fest. Instead, one gets a creepy, atmospheric, low-budget cross between art and exploitation. A young woman and her parents discover strange goings-on at the run down carnival at which they recently began working, and they find themselves having to escape from a nightmarish situation. The plot is fairly minimal, with the movie feeling more like a creepy tone poem than a strictly narrative piece. The cast and crew use the run down carnival location to great effect. The amount of atmosphere they generate using found materials and a very limited budget is quite impressive. Filmed in 1973 and thought lost for almost 30 years, the film is not as widely known or seen as other films of that time. Its experimental and psychedelic atmosphere makes it an interesting artifact from its era and worth a look. 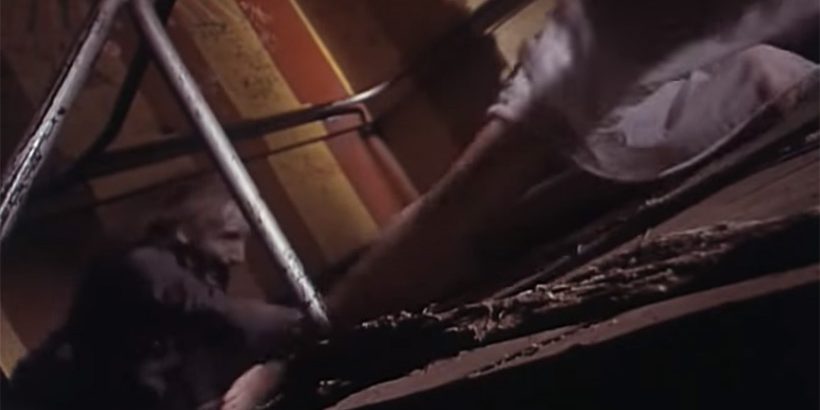 The plot of Malatesta’s Carnival of Blood is fairly minimal. Two families, the Davises and the Norrises, have recently begun working for a run-down carnival owned by the mysterious and seldom seen Malatesta (Daniel Dietrich). Managing the carnival for him is Mr. Blood (Jerome Dempsey), a genial but oddly creepy older gentleman who has unique dietary needs. After the Davises (Jim McCrane and Gloria Salmansohn) and their daughter (Karen Salmansohn) take a ride into The Tunnel of Love, they are never seen again. Needless to say, this alarms Kit (Chris Thomas), the young operator of the ride. He warns the Norris’ teenage daughter Vena (Janine Carazo), with whom he is smitten. While trying to uncover what is going on, Vena and Kit run afoul of the ghoulish groundskeeper Sticker (very effectively played by William Preston) and the carnie Bobo (HervÃ© Villechaize). After a few more gruesome nighttime murders on the carnival grounds, Vena and her parents (Paul Hostetler and Betsy Henn) find themselves on the run from a horde of ghouls who overtake the carnival at night. They eventually find themselves trapped in the nightmarish caves that lie beneath the carnival. What is the secret of the carnival, and can the Norris family ever escape? 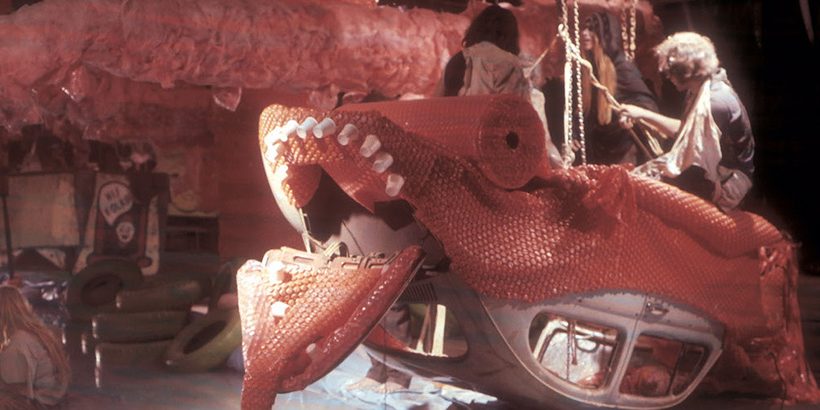 The locations almost act as actional characters in Malatesta’s Carnival of Blood. The first half of the film primarily takes place on the carnival grounds themselves. During the day, the carnival is a rundown shambles. You can see that its heyday was long in the past. The grounds are all but empty of customers and the rides are in much need of maintenance. At night, the carnival grounds transform into a dimly lit nightmare landscape of dark shadows and dim alleyways. The film’s crew do not have to do much to create this impression; Malatesta’s Carnival of Blood is shot on location at an old amusement park that is scheduled to be shut down and demolished in only a few months. Eventually, the action moves to the warren of tunnels that lie beneath the carnival and are populated by ghouls. Director Christopher Speeth does an excellent job transitioning between the two locations. It really does feel as if the characters and the action are moving to a vast space beneath the grounds. In reality, the underground scenes are shot in a large warehouse. Through creative set dressing, the filmmakers transform the warehouse to a bizarre and psychedelic underworld that is reminiscent of the underground lair from the third act of Rob Zombie’s House of 1000 Corpses (2003). 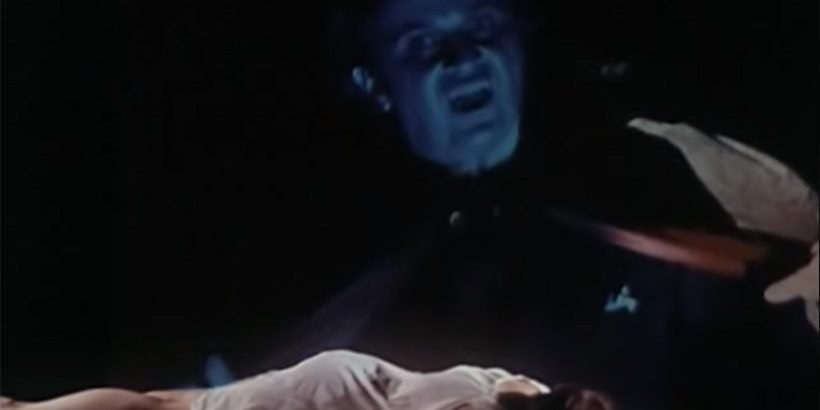 The very low budget of Malatesta’s Carnival of Blood does not allow for extensively constructed set. The filmmakers bring about much of the transformation of the warehouse location into the carnival underworld by creative use of found materials. Much of the ghouls’ world is created by using large amounts of translucent plastic sheeting to create walls and define spaces. This is supplemented by liberal use of vast quantities of army surplus orange bubble wrap. This does not feel cheap, but instead ends up looking like something the ghouls may have collected and used to line their burrows, almost as if it was nesting material. It is oddly effective. A broken down Volkswagen Beetle is suspended upside down, lined with the ubiquitous bubble wrap, and becomes lizard sculpture and an impromptu hammock. Mylar and thin aluminum sheeting is transformed into a deadly hall of mirrors. None of this should work, but it does. It creates a disturbing and disorienting realm where it is easy to see one getting lost. 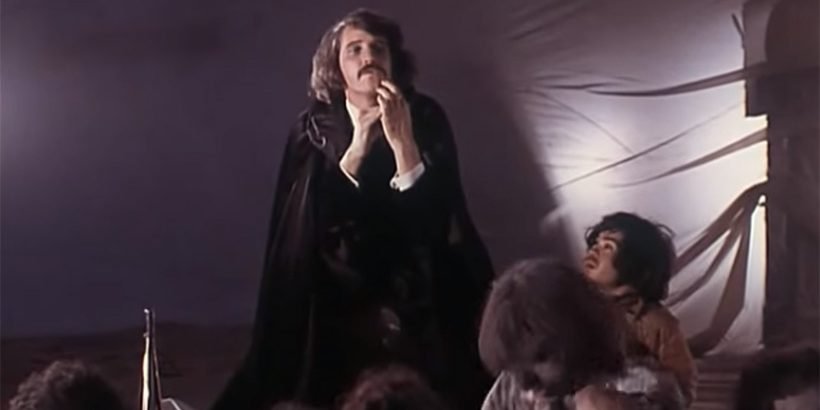 “Disturbing and disorienting” is a good description of Malatesta’s Carnival of Blood as a whole. It is not really scary, but it is very creepy with some creative and nightmarish imagery. While there is a plot and it does have a resolution, the overall feel of the film is an eerie, psychedelic tone poem or fever dream. Director Speeth started in experimental shorts, and that experimental vibe is very much in effect here. Reportedly, and not surprising, the cast and crew abandon the script halfway through filming and go with more improvisation. The opening scene has Vena visiting the carnival’s fortuneteller Sonja (Lenny Baker). Vena, Sonja, and the table at which they are sitting are all on a large lazy susan which slowly spins them throughout the scene, creating a feeling of unease in the viewer. Ghouls  for much of the film behave similarly to the ghouls/zombies in George Romero’s Night of the Living Dead (1968), but occasionally they also display non-ghoulish behavior, such as when a small group of them sing a beautiful chorale in the midst of the chaos. In a couple of scenes, the ghouls are even shown watching old silent films such as The Phantom of the Opera (1925) and The Hunchback of Notre Dame (1923). The same rear projection screen used for the silent film viewing is also used in a chilling scene with an oversized Mr. Blood looming over Vena. Director Speeth does not present the scene as realistic, but instead as intentionally stylized and reminiscent of early German expressionist horror films such as The Cabinet of Dr. Caligari (1920). 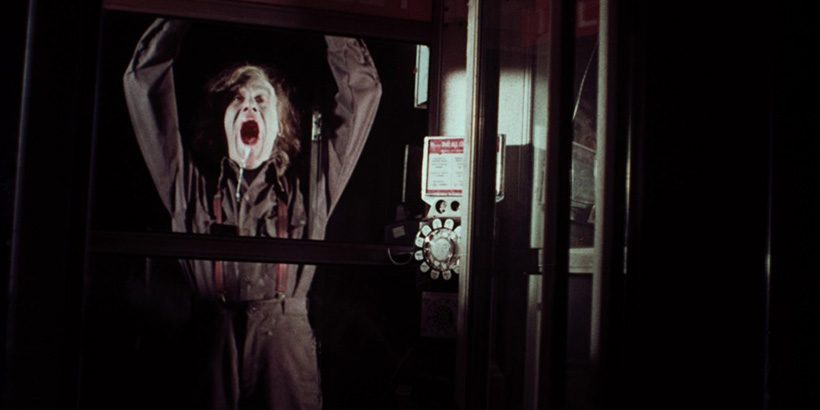 Malatesta’s Carnival of Blood is a creepy and disturbing little artifact from a time where art and exploitation films collided. The plot is thin but does its job; it provides a framework for a nightmarish tone poem. The locations and meager budget are used very effectively, delivering a film that is far more atmospheric than it should be. One truly feels like one is visiting a dying (dead? undead?) carnival and encountering its ghoulish inhabitants. If you are looking for obscure chills are are open to experimental film, this bizarre little time capsule is worth a gander.

Malatesta’s Carnival of Blood  is currently available from Arrow Video and on Shutter. 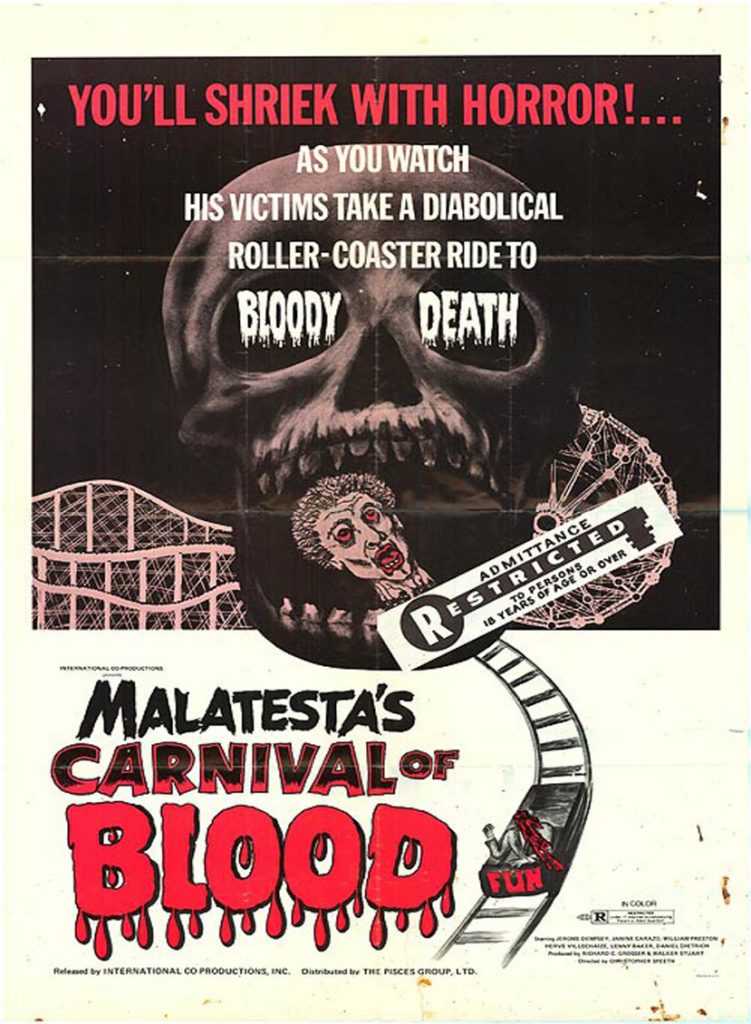 “Halloweed” (2016): Keeping the Holiday Green with a Steady Dose of Laughs

Our editor, the esteemed Doc Rotten, seemed positively gleeful when he gave me the opportunity to review the new film Halloweed. Maybe he realized I grew up in the 60’s […]

[Review] Once Upon a Time at Christmas (Blood in the Snow, 2017): The Holiday Cheer Runs Blood Red In This Gory Yuletide Feast – by Doc Rotten

Straight from the Blood in the Snow Canadian Film Festival held November 23 through November 26, 2017, in Toronto comes the holiday gorrific  gem Once Upon a Time at Christmas […]

[Review] Bring Out the Fear (2023, Horror Collective) Trapped in the Woods with Bad Dialog

The Grue-Crew review BRING OUT THE FEAR (2022, The Horror Collective) on Gruesome Magazine episode 390. Jeff Mohr from Decades of Horror: The Classic Era, Crystal Cleveland, the Livin6Dead6irl from […]