What’s happening, Grue-Believers? I’m really excited to bring you a new horror film by the incredibly talented Canadian actor  Debbie Rochon. With hundreds of films to her acting credit, including Troma’s  The Toxic Avenger IV: Citizen Toxie, The Theatre Bizarre  and Return to Nuke ‘Em High Volume 2 just to name a few, Rochon is now sitting in the director’s chair for the edge of your seat modern horror thriller,  Model Hunger.

Model Hunger‘s  plot revolves around an older woman named Ginny Reilly (Lynn Lowry), a former pin up girl and actress who began to lose more and more work to women with a perceived ”ideal” body type. Over the years, this rejection led her to become a bitter, murderous and revenge driven woman, lashing out at the world and preying on the type of people that she thinks made her this way, even going so far as to eat the flesh of the ones she kills. Enter new neighbors Sal and Debbie (Carmine Capobianco  and  Tiffany Shepis). Debbie becomes suspicious of what  she sees going on over at Ginny’s place at weird hours of the night. When she tells  her husband that she thinks something fishy is going on next door, he chalks it up to her mental state and feels she is slipping further into her psychosis. As a child Debbie was a victim of abuse and suffers nightmares to this day because of it. Debbie becomes determined to uncover the truth about Ginny and expose what she is doing. Ginny has other plans and these two broken people collide in a blood drenched, gory showdown. 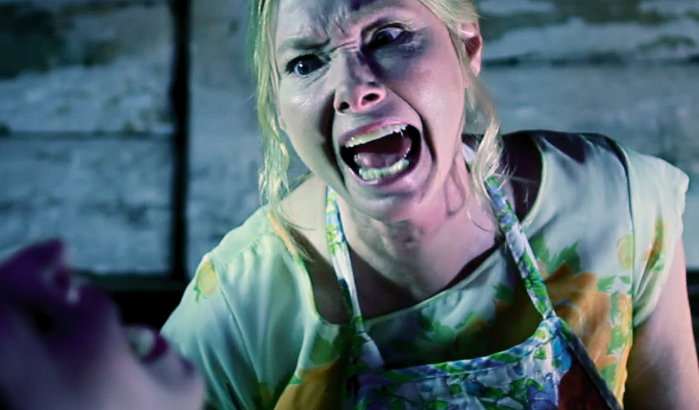 Rochon has put forth a great first effort in her directorial debut. The camera work is a little off kilter in some scenes, but probably by design, because it gives the audience the sense of being off balance and uncomfortable. In one scene in particular, the focus is on two cheerleaders leaving their practice. Then the focus changes. As the girls get into their car, they slide into the background of the shot, while in the new foreground we have a very shady looking man sipping from a flask, staring creepily at a young child playing by herself on a slide. Very unconventional and different but in a good way. It really keeps the viewer on their toes as if to say, ”Anything could happen here. No one is safe.” There are a few shots like this that I found refreshing and at the same time  unnerving. Rochon definitely  has an interesting voice with the camera.

Another stand out in  this film is Lynn Lowry in the role of Ginny. During the course of the film’s ninety minutes, she goes from an old woman needs  a cane, to a scantily clad dominatrix-type, to a stark raving lunatic. And she does it all seamlessly and  seemingly without effort. In one scene she has tied down a male victim and before she begins the torturing and maiming, she goes into a screaming rant about the sexual selfishness of men that absolutely chilled me to the bone. YOU BELIEVE HER. Lowry gives a great performance that had me glued to the screen all the way to the unbelievable ending. 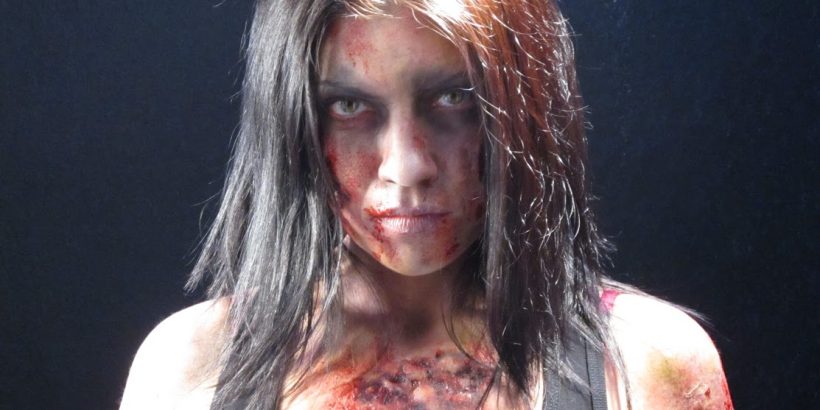 I am and always have been a HUGE fan of practical makeup effects, to the point that if I see a makeup or gag, I can tell you who did it. The effects in Model Hunger are a real treat for horror fans. With this being a lower budget indie film, I’ll admit I didn’t expect much. But the execution  of the effectsin this film disturbed the living hell out of me. I will not soon forget them. I can’t bring myself to spoil them here, but you have been warned.

I was surprised by  Model Hunger  and enjoyed it very much. The film wears its low budget indie feel on its sleeve. But it doesn’t suffer from the typical failings of low budget fare. This does not feel like a low budget film.  To me, the story is the bread and butter of low budget film making. You can forgive a lot of flaws  as long as the story is good. And this story is good. Writer  James Morgart  has crafted a tale that digs in to the long term effects of  abuse changing people in different ways and shaping their lives. Whether it’s verbal, physical or sexual, it’s one thing to survive it, but it’s another thing entirely to live with it. It’s not always a happy ending, and, to her credit, Rochon is not afraid to bring these things to light.

Model Hunger  gets a strong recommendation and is most definitely worth a watch. Check  it out on DVD and digital HD everywhere July 12, 2016. 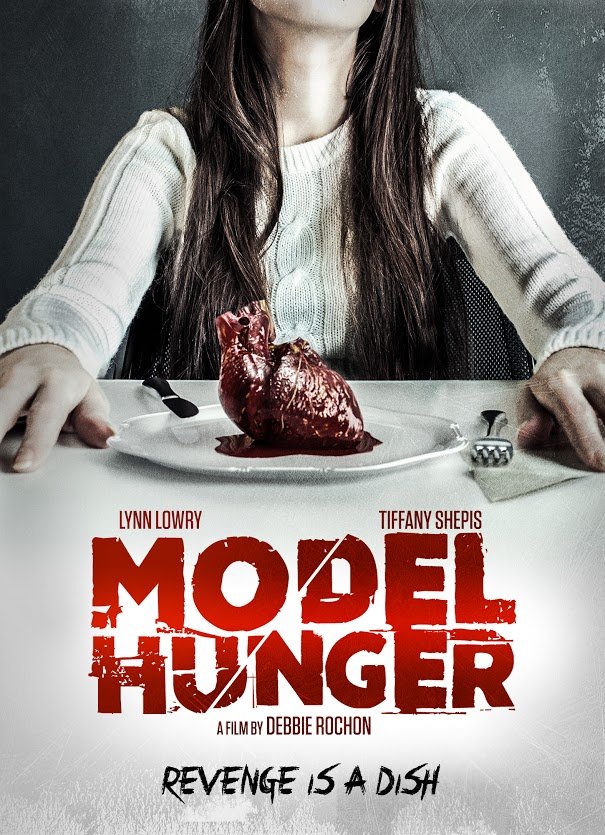 Starring:  Lynn Lowry,  Tiffany Shepis,  Carmine Capobianco
New York, NY – Wild Eye Releasing is honored to put legendary horror actress Debbie Rochon’s directorial debut Model Hunger on the menu this summer. After nearly 300 films, Rochon (Return to Nuke ‘Em High, Phobia, The Theater Bizarre) steps behind the camera to skewer audiences with her blood-curling take on an actress’ response to forced retirement. She brings with her composer Harry Manfredini (The Friday the 13th franchise) and a cast of genre favorites.

Too many horror movies try to separate themselves from the pack by increasing the amount of blood and gore they throw across the screen, hoping that if the audience is grossed out enough they won’t notice the weakness of the plot or the thinness of the characters. That’s why it’s such a refreshing experience to […]

Adult animation isn’t often that adult. Sure, we’ve had animated subjects that often take on darker themes. But it’s usually for a more satiric comedic subversion of usual expectations. People laugh at the kids from  South Park  because they’re doing things children would never do, for example.  Oddly, the most complex material today animation wise […]

‘I’m a man of all works, sir. When my Master says, “Krull, do this thing,” I do the thing, whatever it may be.’ And then there are the things Krull does that his master doesn’t tell him to do. Join this episode’s Grue-Crew – Whitney Collazo, Daphne Monary-Ernsdorff, and Jeff Mohr – as they experience […]