All Girls Weekend  is  the story of a group of friends who went to school together but sort of grew apart as they got older. They decide to get together for a weekend getaway to reconnect with each other and  maybe mend some fences. Two of the characters, Daniela and Nancy carry a bit of friction toward each other, mostly due to previous high school peer pressures and cruelties. The girls decide to go on a hike in the woods. Very quickly, it becomes apparent that they are lost and going in circles. As the tag line reads: ”Mother Nature is a bitch.” No truer words have ever been  spoken as the girls become aware that more is going on here than them simply taking a wrong turn somewhere. 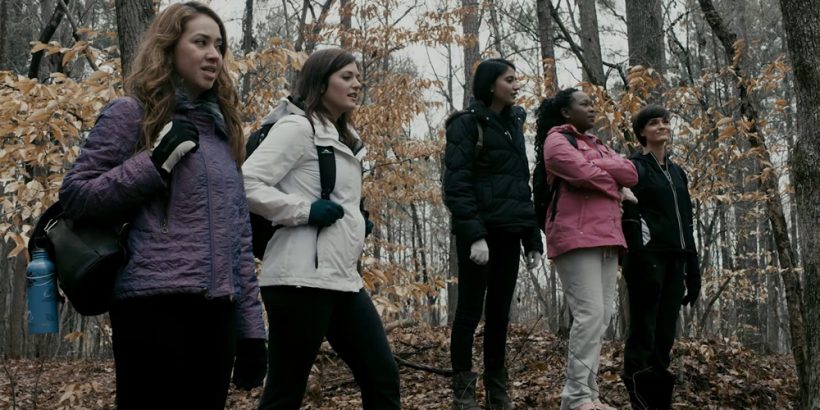 As the movie starts out, we are introduced to a woman in the woods who is looking a little haggard and put through the wringer. She is kneeling on the ground over an unconscious girl. It seems the woman is attempting to kill the young girl with a rock, but can’t bring herself to do it. As weird ghostly whispers and sounds surround her from all sides, she lifts the rock above the girl’s head and screams, ”I’ll do it!”, as she brings the rock downward. And opening credits roll. A very chilling start to this film that I must say hooked me right in.

Post credits we are back with the aforementioned group of girls who are meeting at Daniela’s (Katie Carpenter) house to go over their arrangements. The only hold out is Nancy (Jamie Bernadette), who not only arrives late, but brings an uninvited guest Stephanie (Lakhani) who doesn’t even know the rest of the group. This is interesting because it clearly causes even more tension between the characters. Usually in these types of movies, the characters are written like they are BFFs forever and everything is hunky dory until whatever horrific situation they find themselves in brings out the worst in them. Not here. Simon lets us know that  these characters as not the best of buddies from the beginning. There is an underlying tension and all-around uncomfortable feeling between all these women and it makes for a very interesting dynamic to the group. It starts out bad and just gets worse for them.

Being lost in the woods is no fun. Take it from me, I know. You feel the frustration and the anger when the girls are all concerned about what is going on and why they are lost, with  Daniela continually insisting that they are not. These scenes are played out very well  and are very creepy by Carpenter. Almost as if Daniela doesn’t care if they are lost. Why is she acting this way? What is her problem? Not only are the characters from the movie asking this, but so is the viewer. And there is a reason for her behavior, but I won’t spoil it here. And it’s probably not what you think. 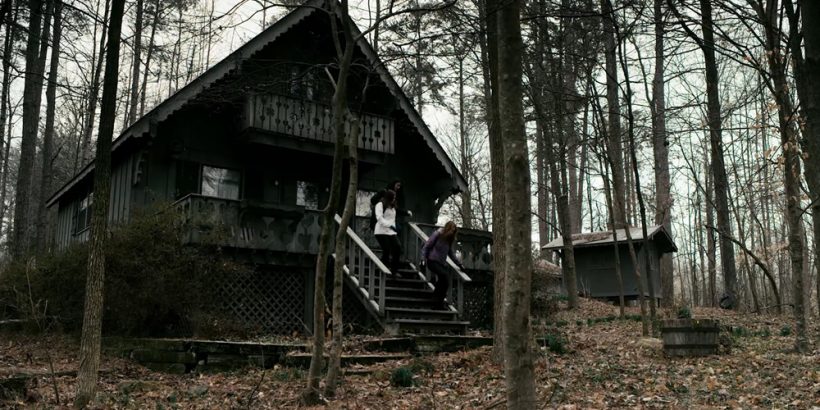 The girls decide to follow a stream to see where it leads since they are unable to escape the woods. The stream will  lead the girls somewhere, right? It lands them at the door of an old, dilapidated mill, an abandoned building they believe to be cursed. Simon really conveys the desperation and hopelessness of the situation here, using the existing rundown location  and lonely stream to its fullest capacity. You really believe something bad could happen here, and these women are truly isolated.

There are not a lot of what I would call ”action” scenes in All Girls Weekend. The horror is a lot more subtle in nature and in execution. And this is a good thing. When there are scenes of horror or gore, it really makes an impact. There are some good practical effects that made me cringe more than once. The characters are the focus here and it works.  Instead of playing as archetypes, our protagonists are very fleshed out and written in a very real way. The longer they are lost, the more we get to know about them. We actually care about them when they meet their fates. 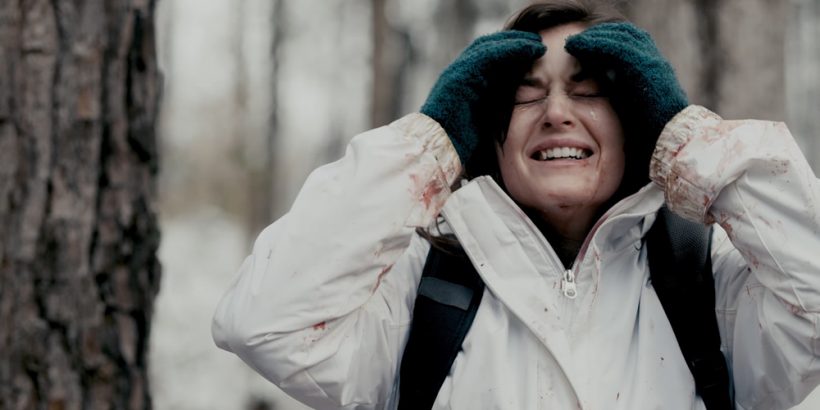 The relationship between Nancy and Daniela is especially compelling. The reason that Daniela has such tension with Nancy is a very real and believable one, yet you still feel  sympathy for both. Bernadette and Carpenter really have their moment to shine during this confrontation. This is one thing I really like about Simon’s movies. The characters are not perfect. They are flawed, yes, but that doesn’t mean you don’t like them.  You want  them to get out of this situation.  They are human, like you and me.  Her movie  Hazmat  followed this same type of character development, and I loved it as well.

I won’t give away any more of the story because I really think this movie deserves a look. But it should be said that If you are a fan of independent horror films, you will dig where this film is coming from. Creepy supernatural goings on, plenty of WTF moments, great characters. I really enjoyed this film. And having enjoyed her previous films (The Awakened,  Hazmat, Agoraphobia),  I was looking forward to seeing this one and I was not disappointed. I think Lou Simon has a very interesting career ahead of her as both a writer and director, and I look forward to seeing more from her in the future.

All Girls Weekend  is an Ash Films/White Lotus production.

Directed and written by   Lou Simon

One of the few banes of my sad, angry existence (besides my wife & kids) are found footage films. Unlike some other employees here at Gruesome, I literally despise everything about them. The sub genre stated out with a bang with The Blair Witch Project (1999), and has had a few meager highlights since then, […]

“The Hourglass Figure” (2013): Housewife Pays a Hefty Price for Time to Herself

SUPER SCARY SHORTS SATURDAY We can’t stop time, it is said. If we could stop it, time would probably drive quite a hard bargain with us to do so. Prolific director Patrick Rea shows just how terrifying a prospect this  can be in his first-rate short horror film The Hourglass Figure. Chelsea (Michelle Davidson) is […]

Throughout October, Netflix has been providing genre fans with an ample amount of horror content from Stranger Things Season 2 to The Babysitter and so much more. Jeff Mohr is here to give his review of yet another Stephen King adaptation, the haunting film 1922 (2017) from director Zak Hilditch. The film features Thomas Jane, […]