Well, holy shit, did this movie surprise me.

With a title like The Stuff, I was expecting, hoping, for a cult classic B-Movie horror film with some kind of Blob-type monster. What I got was a film that is filled with a cast that play off each other in a very organic and natural way, and a pretty solid story that focuses more on why and how  things are happening rather than on the actual creature itself. As a result, I was treated to a film that can truly be defined as a lost gem that deserves cult status! My hat goes off to both writer/director Larry Cohen  and the core cast of the film. I know that as a kid, seeing the box art of the VHS sitting on the shelves in video stores, I surely didn’t expect this film to be as smart as it was. Basically, there’s a lot of “stuff” going on in The Stuff.

The story  is about a new consumer food product hitting the store shelves and selling like mad. Everyone loves to eat it, everyone wants to have it and everyone wants to BE it. At the beginning of the film, we have a nighttime scene at a mining facility where some workers are making their nightly patrol. An old man finds this white goo oozing up from the ground, and of course, the next logical thing do is…taste the shit. It tastes so good, the man shows his co-workers and has them taste it. They think money can be made and decide to figure out a way to sell it. We suddenly flash ahead and see a suburban boy, Jason (Scott Bloom), in his home late at night. He decides to visit the fridge for a midnight snack and opens the door. Inside he notices a can of The Stuff that has fallen over and the contents are crawling out. So right away without any build up, it is revealed that this shit is bad news. Jason’s dad finds him, doesn’t believe his story about monster food and tells him to go to bed. The movie then shifts to a yacht for a meeting with some corporate big wigs who are bringing on board an industrial saboteur, David ‘Mo’ Rutherford (Michael Moriarty). Because The Stuff is selling so well and killing them in the market place, they want Rutherford to find its secret formula. It is at this point that the film takes a VERY different direction than what you would expect a movie named “The Stuff” to take. 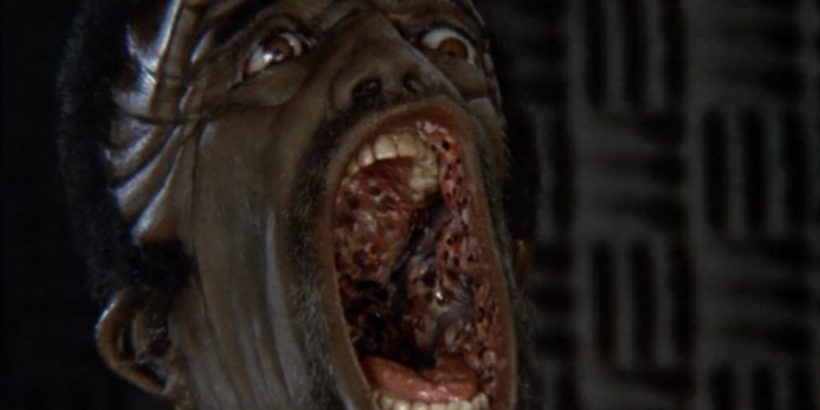 We go from a movie that we would expect to be just a creature feature, 80’s B movie to a film that really digs deep into discovering exactly what and where The Stuff comes from. As a result we get a VERY heavily driven story which was actually very surprising and very engaging. The big reason, other than a (mostly) well written story, is the SUPERB acting of Michael Moriarty as Mo Rutherford, along with his supporting cast. Rutherford isn’t your typical 80’s hero. In fact the man is a very amoral type of guy. He isn’t shy about breaking the law and doing what’s in his best interests at any given time. But he’s also able to realize how to still do the ‘right’ thing when it needs to be done. These two attributes contained in a single character are very hard to believably convey in a movie, but Moriarty does, so fantastically and so naturally, that it greatly helps the movie in all aspects. On top of that, he pulls off a Southern accent pretty damn well.

As Rutherford digs deeper and deeper into what is going on with The Stuff, he begins to discover more and more sinister plots and people, as well as new allies to help in his investigation. When the finale is reached, it leaves us to question just what people and companies will do for a profit. 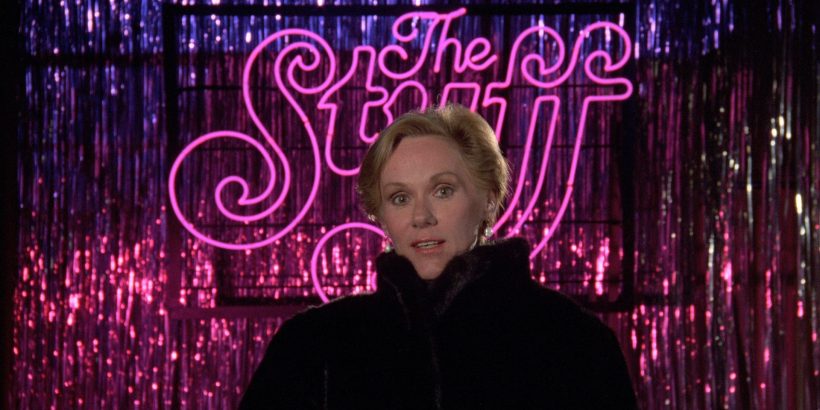 During Rutherford’s investigations he runs across  Nicole (Andrea Marcovicci), the ad campaign manager for The Stuff. When she learns the horrible truth, she becomes his ally and lover, and helps him investigate what is going on. He also runs across Chocolate Chip Charlie (Garrett Morris) who is a kung fu-fighting former cookie tycoon who lost his fortune to greedy family members who sold his factories to the people making The Stuff. As funny as that above sentence sounds it was really cool to see this character along with the Rutherford character trying to solve the mystery of The Stuff. The only bad part is that the characters split up and we don’t get to see as much of Chocolate Chip Charlie as we’d like. Morris did such a good job with this character it is sad they didn’t use him more in the film.

While I have been praising the film for diverging from the typical 80’s horror movie, it does still have a few pitfalls. Like I mentioned at the start of the review, there’s the the miner who just tastes bubbling, white caulk-looking goo erupting from the ground. Who does that? The movie also suffers from some editing problems as the film makers either, a) try to fit too much content into a small amount of time resulting in a jumbled bunch of scenes, or b) they use quick edits to cover up their limited special effects (which is somewhat forgivable). 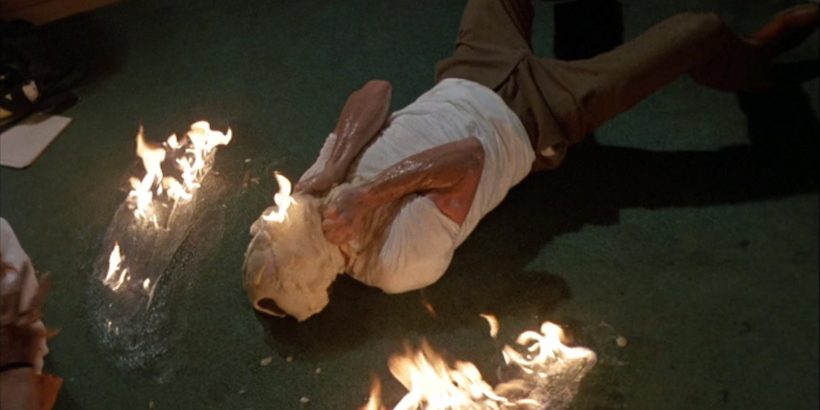 Overall however, The Stuff was a real treat to watch. The movie puts story first, building support for the existence of the  threat, not the other way around. I noticed several points in the movie where the film could have easily had 80’s logic fails (like how did this stuff get past the FDA) and next thing I know…they actually address the possible gaps! Kudos to the writers! While the movie has funny moments, it also has its dark elements and mixes the two very well. Actually the movie could almost have been written in an H.P. Lovecraft-styled horror and most everything would have fit perfectly.

My girlfriend, who is a NOT an especially big fan of horror films that are  too supernatural or WAY OUT there, found herself really interested in the story and how it played out. Again, my hat goes off to both writer/director Larry Cohen and the core cast of the film. I wonder how much of the script was improvised and how much was written. There are many lines of dialogue between Rutherford, Nicole, Jason and Chocolate Chip Charlie that come off as so natural and subtle that they really add to the movie’s heart and it’s X-Factor. And that, my friends, is what elevates The Stuff  way above what its title suggests.

The news that Scream Factory was going to give the Collector’s Edition Blu-ray treatment to the fan favorite slasher Behind The Mask: The Rise Of Leslie Vernon was sweet, sweet music to the ears of fans of the film around the globe.   We’ve been waiting patiently for word on what the disc may send […]

We have found ourselves at a place where pretty much every word ever written by Stephen King wants to be adapted to film or series by someone.   Case in point – today brought the news that FREEFORM – which if memory serves me correctly used to be ABC Family Channel has optioned his crime/noir […]

Honestly – don’t have much else to tell you other than what the headline proclaims but – it’s some exciting news none the less. Academy Award winner Mahershala Ali has been announced as BLADE in the forthcoming reboot of the already established franchise. Of course, Wesley Snipes donned the sunglasses in three previous films but […]

GODZILLA VS KONG (2021, HBOMAX) Review – An Epic Battle of the Titans

On episode 438 of Horror News Radio: The Grue-Crew review… GODZILLA VS KONG (2021, HBOMAX). Warning: possible spoilers after the initial impressions! Be sure to subscribe to the Gruesome Magazine YouTube channel to catch all the HNR episodes. And check out Patreon to see how to watch the recordings live! This is HORROR NEWS RADIO, […]