If you’re familiar with bible scripture — and being from the south, where you can find scripture written on everything from vacuum cleaner bags to McDonald’s wrappers, I’ve heard one or two — Genesis, chapter 11 tells the story of the Tower of Babel. At this point in history, all people spoke one language. They grew arrogant and decided to build a tower to “Make a name for ourselves, lest we be scattered across the Earth,” or in other words, to challenge the Big Guy by building a tower that would rise high enough to reach His level. God takes issue with this, gets angry and “confounds their tongues”, so that they couldn’t understand each other, thus, preventing them from  finishing the tower. God then proceeded to spread them across the globe, providing the story for why we have different languages today. The unfinished tower was called Babel, which sounds like the Jewish form of the word, “confused”.

This directly correlates with my state of mind as I watched this movie. And in case you thought you were reading a sermon, yes, this story has a direct link with The Offering’s story line.

I’ll try to provide a synopsis for this movie, but first  a warning: there are possible spoilers ahead and definitely some Babel.

The movie starts off with an exorcism gone bad. Father DeSilva (Borgonon), is left questioning his faith. At least I think so, because after this two minute scene, we don’t see him again until close to the third act.

Cut to Chicago. Jamie Waters (Rice) is a crime journalist who finds out her sister Anna (Condy) has passed away in Singapore where she lived with her daughter, Katie (Hertz). After travelling to Singapore, and meeting with the doctors there, Jamie is informed that her sister’s death was a suicide. It’s thought that the suicide is due to the fact that Anna has lived with a Huntington’s disease, a very painful disease which she shares with her daughter Katie. The doctors then try to lessen the blow of the news by showing Jamie the suicide video of Anna suffocating herself with a plastic bag. (Did you catch the sarcasm, there? Just checking.)

After meeting Katie and Anna’s ex-husband Sam Harris (Settle), Jamie begins to investigate Anna’s death when Katie insists that her mother told her she would return in seven days. She uncovers other weird suicides with similarities to Anna’s; the other suicide victims also have terminal illnesses, film their own suicide, and claim they will return in seven days.

Around the same time, a young preacher, Father Tan (Adrian Pang), is investigating the desecration of various church websites by hackers. A strange symbol that  looks like an old wooden telephone pole with a bow tie, appears everywhere on the websites. Father Tan tries to enlist the aid of Father DeSilva, who couldn’t care less. Remember, he is wallowing in a crisis of faith (I think), and leaves Father Tan to his own devices.

Meanwhile, back at the home of Anna Waters, Katie is having trouble with some ghosts who are trying to warn her of something that happened in the house a long time ago. She is warned that “He” is coming back.  Jamie and Sam try to convince her that her mother is not coming back, but she’s not having it.

Father Tan finally realizes that the hacking is being done by a very evil entity who is using binary code as the “One Language”, just as in the book of Genesis, to influence people and rebuild the Tower of Babel. Oh yeah, and he also needs to possess Katie as well.

If this synopsis feels like it’s all over the place, it’s because it  is. The script has way too much going on and doesn’t slow down to really develop any of it’s ideas. The whole concept of binary code being used to bring about an ancient evil is very interesting to me and would be a fresh idea if done properly. And it just isn’t, I’m afraid. The basic idea of the movie takes a backseat to a lot of standard possession movie tropes, and because of that, the film doesn’t know what it wants to be. It tries to make the whole thing a mystery, but it’s one the audience can figure out way before they are supposed to.

Being Singapore’s first foray into Hollywood film making could be the reason this is kind of an all things to all people kind of movie. The Offering  feels like they are trying to appeal to as wide an audience as possible, and a lot of story and character development gets sacrificed for that reason. Kelvin Tong has a good eye for the camera and there are some really good shots in this film, despite the screenplay flaws. The way he moves the camera around is very interesting. The music is good as well and sets a suspenseful mood in a lot of spots. I would definitely be interested to see more from him on the right project. Technically, it’s a very well shot film. Story-wise, though, I just wish The Offering  had a little more meat on it’s bones.

Momentum Pictures is proud to present THE OFFERING, in select U.S. theaters and VOD nationwide this Friday, May 6, 2016! 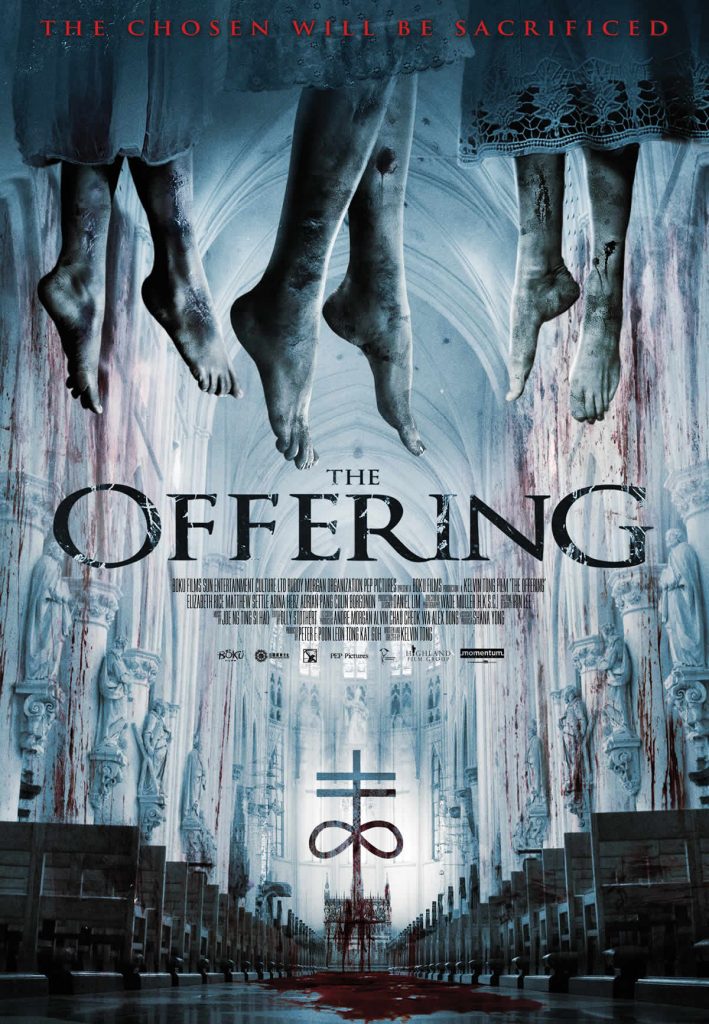 After destroying and uniting Southeast Asian tribes to create the Mongol Empire, feared warrior Genghis Khan finds himself on a metaphysical quest during the final days of his life in director Kerry Yang’s magnificent science-fiction fantasy short film Genghis Khan Conquers the Moon. This gorgeous, ambitious short packs an unbelievable amount of scope and technical […]

Australian dark comedy Dolls involves a man’s unhealthy obsession with his doll collection. It’s a fun short film that also features some heavier moments as it addresses possessiveness and other perilous relationship issues. A man (Cameron Hurry) and a woman (Caitlin Hill) are in the middle of a heavy makeout session when, after entering his […]

“Torture Garden” (1967): A Horror Sideshow Where All the Acts Are Worth Catching

The fun thing with horror anthology films is that they are a bit like carnival sideshows – one is guaranteed to see a variety of oddities. Even if not all of the acts are hits, one almost always finds something one likes. With Amicus Productions’ Torture Garden (1967), director Freddie Francis and screenwriter Robert Bloch […]

“If the devil is to exist in this world, it cannot look like a devil.” I don’t know. How will we recognize it? Join your faithful Grue Crew – Doc Rotten, Chad Hunt, Bill Mulligan, and Jeff Mohr – as they polish off the Bloodthirsty Trilogy with Toho’s Evil of Dracula(1974). Decades of Horror 1970sEpisode […]

On this episode of Horror News Radio: The Grue-Crew review… WHAT WE DO IN THE SHADOWS (FX, TV – S02E1 – 02). This is HORROR NEWS RADIO, the official GRUESOME MAGAZINE podcast. Back with Doc Rotten once again are the scariest, goriest, bloodiest co-hosts on the ‘Net. Dave Dreher, the lead news writer at Gruesome […]

Reviews of THE WRETCHED and PENANCE LANE on Gruesome Magazine 113

This week, the Grue-Crew review a pair of films who’s main characters discover that following your own lead may have dire consequences. The first film this week, PENANCE LANE from director Peter Engert, follows a hardened criminal who gets in gruesomely way over his head. The second film, THE WRETCHED from directors Brett Pierce and […]