In The Haunting of Alice D, the modern descendant of a 19th century brothel owner celebrates the renovation of the building by throwing a wild party, complete with prostitutes and drugs. This does not sit well with the ghost of Alice D, a young woman previously sold into sex slavery and whose life ended tragically in the house over 100 years earlier. I have to admit, when I first read that description and saw the trailer for The Haunting of Alice D, it did not look like something I thought I would enjoy; it looked like it would be a low-budget, exploitative, “bros and hos” jump scare fest. Instead, I am pleasantly surprised to report that it is a more subdued “haunted house” film that takes its time starting small and building to a satisfyingly bloody climax. While it does have some rough spots in the technical department, this directorial debut of writer/actress Jessica Sonneborn is well worth a look.

The film opens in an upscale, 1890’s brothel where we are introduced to the young, teenaged Alice D (young Alice: Kaylee Signore, older Alice: Kristina Page) who is attending to her older sister Delilah (Sarah Nicklin). Their sisterly discussion is broken up when in bursts the owner of the brothel, Sir Davenport, played with appropriate menace by horror icon Kane “Jason” Hodder. Delilah is being sold to another man and Alice is told that she is to begin her “career” at the brothel. The film flashes forward to the present day, where we are introduced to Joe Davenport (Juan Riedinger), who runs a strip club and is a descendant of the brothel owner, and who seems to have the same attitude toward women as his ancestor – that women are just objects. As evidence of his attitude, he makes sure to hire a trio of prostitutes to entertain the guests at the party he is throwing at the newly renovated “family home” (aka the former brothel). As the party progresses, a couple of the characters enter “exposition mode” to provide more background on the history of the house and the disturbing and tragic end of the titular Alice. We also find that Alice’s fate of being forced into sex slavery is not that different from that of one of the present day “hired women”, Jenny (Megan Hensley), whose economic situation has forced her into selling her body for the evening. Strange things begin to occur around the old mansion, and disturbances become increasingly menacing as the evening goes on. Are the unsettling events being caused by tainted party drugs or by the angry ghost of Alice D? 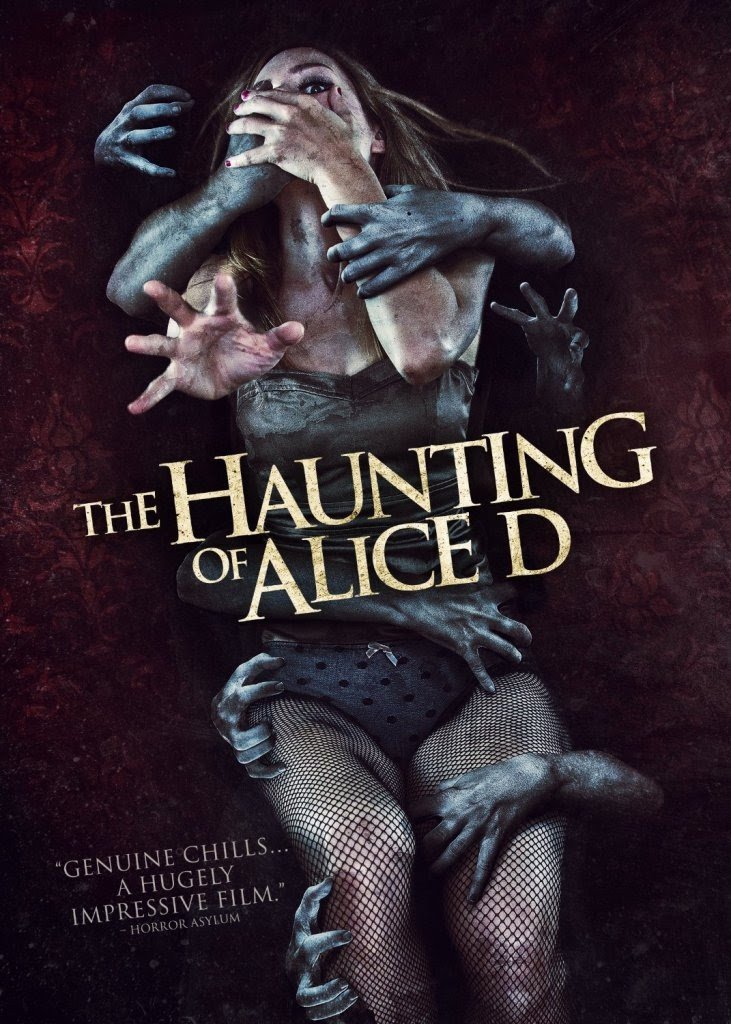 The emotional center of the film is the nascent relationship between Megan Hensley’s Jenny, one of the “working girls”, and Michael (Aaron Massey), a friend of Joe’s who does not initially realize that some of the women at the party are there to entertain. There are some very nice character moments between Jenny and Michael, giving us more insight into who they are and how they ended up at the party. We grow to care about them and fear for their safety. Jenny and Michael are given the most to do, emotionally, with many of the secondary characters being fairly flat. Even so, there are some nice parallels drawn between some of the characters from the 1890’s and the ones from present day. While physically quite different, the hulking Sir Davenport and the rather less-bulky Joe are equally menacing and have equally reprehensible attitudes towards women. This is nicely (but disturbingly) demonstrated in a pair of scenes where Sir and Joe force themselves on Alice and Jenny respectively. These scenes are not exploitive and are handled tastefully while maintaining the emotional impact on the women involved. While there are a couple of later scenes involving brief nudity, they mostly fit organically. Interestingly enough, the only scene I would consider as slightly gratuitous involves Jessica Sonneborn, the writer/director of the film, and that scene can be interpreted as being empowering for her character.

One of the most surprising aspects of the film is just how subtle and restrained it is when it comes to scares. I had anticipated the film to be filled with cheap jump scares, like all too many modern low-budget fright flicks. Instead, The Haunting of Alice D is a modern take on an old-fashioned haunt, reading from the playbook of older haunted house films, such as the original 1963 The Haunting, at least initially. Early in the film, the supernatural elements take the form of shadows and items moving in the background, mostly unobserved by the characters. Later, when the first characters come face to face with mortal danger, the scene is creatively shot from the threat’s point of view, cutting away before anything happens. As the film progresses, the threats increase in intensity and violence. While there are a couple of actual jump scares, they are well placed and serve a narrative function. The supernatural elements build to a violent and bloody climax. While the climax is satisfying, it does feel a little too quick and a bit too claustrophobic. This leads to some confusion as to what the exact fate is of several characters. Overall, the film is well paced, parceling out its scares slowly at first and crescendoing to an effective and gratifying conclusion. 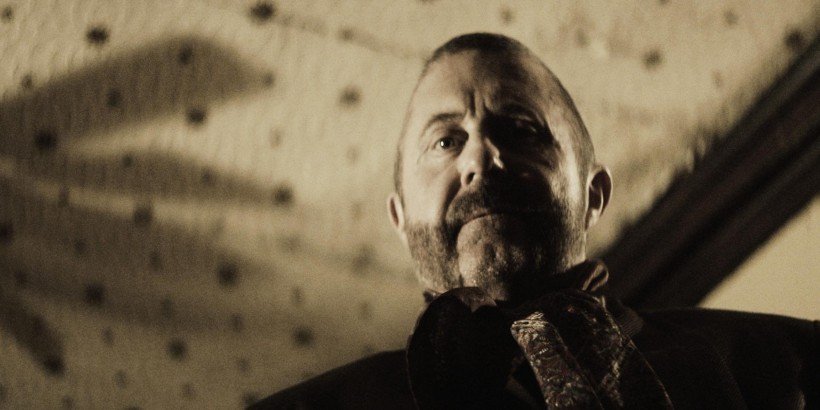 While the pacing of the film is excellent, one cannot help but wonder how much more effective the scares would be were it not for technical issues with the film. Many of the scenes are shot with over-saturated lighting, leaving no shadowy corners. Not to be flippant about it, but I would say that those scenes are lit as if they were in a porno film. This may seem odd, but one gets the feeling that the lighting is a deliberate stylistic choice, as the over-saturated lighting is not used consistently throughout the film. I just do not feel that it is a good choice for this film. If the location was lit more subtly, more like a traditional “old dark house” film, I think the atmosphere and “creep factor” would be greatly enhanced. In addition to lighting issues, the sound quality is a bit muddy and inconsistent, pulling the user out of the film in some scenes.

The Haunting of Alice D is a satisfying directorial debut from veteran writer/actress Jessica Sonneborn. It successfully combines old-school haunted house tropes with those of more modern horror films. Even though it has some technical issues that take away from the overall atmosphere of the film, it still manages to pull the the viewer in. Writer/director Sonneborn makes interesting and unexpected choices in both the story and direction that make me excited to see future writing/directing projects from her.

The Haunting of Alice D

RLJ Entertainment (NASDAQ: RLJE) brings you the THE HAUNTING OF ALICE D.  Written and directed by Jessica Sonneborn (Lure), the film stars Juan Riedinger (Narcos), Aaron Massey (Refuge from Storm), Megan Hensley (The Crazies), Al Snow (The Witches of Oz), Kane Hodder (Friday the 13th Part VII: The New Blood) and Kristina Page (Penny Dreadful). THE HAUNTING OF ALICE D is available on DVD and Digital Video for an SRP of $27.97 on May 3, 2016. 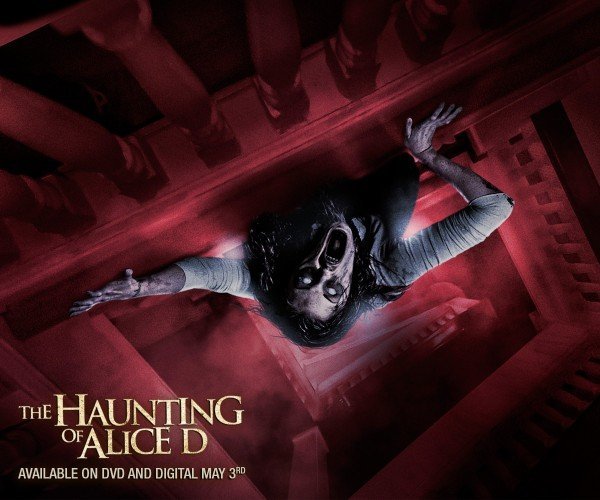 Writer/director Ryan Oksenberg balances the macabre and the meditative, the ghoulish and the gorgeous, and the pensive and the putrid in his beautifully shot horror short Together. Characters suffering from […]

Homewrecker, as the title suggests, is the story of one woman wrecking the homelife of another. To do this, director Zach Gayne uses all the tricks at his disposal: psychological […]

Grue-Believers, Join Doc Rotten in his travels to Las Vegas, Nevada this April. Look for daily live streams and updates, followed by video blogs on his travels to various Vegas […]