Mixing elements of the floundering found footage craze and the growing first person shooter fascination, Pandemic strives to reinvent the zombie apocalypse film. It never truly achieves that lofty goal but manages to entertain along the way. The film follows a team of survivors entering into the infected zone on a rescue mission: three soldiers (Denise, Wheeler and Gunner) and a medical advisor (Lauren). Gunner’s (Mekhi Phifer) dialog “Just try to think of it as a game. It will help.” is clear indication of the problem Pandemic faces. The intent may be to counter with Lauen’s (Rachel Nichols) reply, “This isn’t a game,” but it also illustrates much of the film’s approach. The visuals support the notion of “a game” with the character’s weapons extending into the shot from their POV. This does not always work – or rather – it gets tired fast. It also gets in the way of the story buried under all the mayhem and gun play which finally gains some footing once the cast dwindles down to two key members and is allowed to focus on the story instead of lengthy exposition and clumsy world building. Pandemic is a flawed but ultimately enjoyable twist on the zombie apocalypse film. The more the audience is up for the first person “game” POV, the more compelling the visuals will become.

The story behind Pandemic begins with the world already engulfed in a virus that has the population turning into mad raging beasts. The word “zombie” is not widely used. Most of the survivors have set up in safe zones. Short on supplies and in search of more survivors, they often travel into the infected zones on important missions. Lauren (Rachel Nichols) is a scientist and doctor who is assigned her first mission to rescue a party who’s transport broke down leaving them stranded. She joins two soldiers (“Denise” Missi Pyle and “Gunner” Mekhi Phifer) and a driver (“Wheeler” Alfie Allen). Together, they venture into the city, facing the virus threat head on. Their mission is threatened by mistrust, a lack of teamwork and a hidden agenda.

One of the biggest hurdles Pandemic faces is the amount of time it uses to set up the world in which the film exists. Lauren is introduced to the leader of the survivors, Doctor Greer (Paul Guifoyle), who explains the virus and all the different stages those infected face as they walk through a lab studying the virus and the infected. This is followed by her introduction to the crew on her transport with more exposition. As they begin their travel into city, the film makers treat the audience to even more clunky world building dialog. While they do manage to color the characters, it is all a one  dimensional effort and offers very little enticing character moments or conflicts of interest. Lauren appears ill prepared for her trip into the city and Gunner is peeved she is unable to handle herself in dicey situations. It isn’t until later in the film when a secret is revealed that Lauren’s character becomes interesting and the conflicts become more engaging.

Director John Suits handles the action along the way with style and kinetic but controlled chaos. The threat of the infected is intense as the manic madmen race toward the main characters shooting, stabbing and fighting their way free of their onslaught. A cross between the virus creatures of 28 Days Later and the fleet-footed zombies of Zach Snyder’s Dawn of the Dead, the beasts in Pandemic aggressively pursue and attack the characters. When the film is consumed by the zombie-like creatures forcing their way onto the bus or surrounding the characters when they go on foot it becomes a fierce example of the genre and makes the best use of the POV camera technique. The problem is that the action often becomes hard to follow with the surroundings becoming disoriented. Perhaps that is the purpose. While the action accelerates, the story itself slows to a crawl, however.

As Pandemic closes in on its third act, it starts to settle into a more confident story with a focused motivation and drive for its main characters. Relationships and character interactions ignored at first acts begin to take shape. Lauren discovers an unlikely ally. The resulting purpose of Lauren’s rescue mission is interesting and compelling but it remains uncertain if the emotional core has enough time and ingredients to fully boil to a head, leaving it feeling much too little, much too late. It is curious to ponder if the true nature of Lauren’s story was shared with audience much sooner in the film if the earlier scenes would have held much more weight and tension. Regardless all the actors handle their characters with convincing authenticity and investment. They tackle the material with all the seriousness and conviction necessary to support a film such as Pandemic.

Pandemic from director John Suits and writer Dustin T. Benson is a film that wants to redefine the zombie apocalypse sub-genre with a unique POV approach to a found footage narrative. Instead, if often feels derivative to past zombie films (28 Days Later, Dawn of the Dead), found footage films (REC, Cloverfield) and POV games. The film handles its world building with clumsy, clunky exposition feeling much like a poorly executed narration before said POV games begins. While it manages to open the pages to its story with this method it fails to draw the audience into the story itself, setting up the world in favor of delivering multi-dimensional characters to invest their attention towards. When the first attack happens, it is difficult to determine which character, if any, to feel anxious for their survival. The intent is the lead Lauren, but solely on the notion that she is the character that the audience first meets and follows. Thankfully as the film progresses, the true nature of her character surfaces and the story behind Pandemic begins to crawl out from under the POV game contrivances of the action. Pandemic is an entertaining film, it may be flawed but it manages to circle into a focused narrative that improves the latter half of the film. Action and gaming junkies will get a thrill out of the POV chaos along the way. 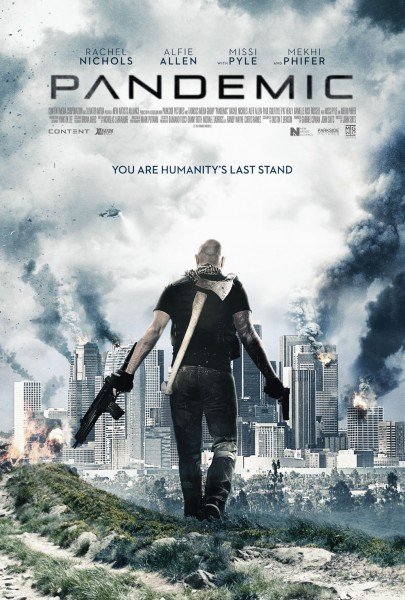 Without even knowing it, Doc gets revenge on Jeff Mohr for suggesting Night of the Lepus as a Decades of Horror 1970s topic. In the spirit of that campy classing, […]

After spending hundreds of years hidden away in the depths of Austro-Bavarian folklore, the Krampus is now a staple of holiday horror cinema.   Last year, Michael Dougherty’s Krampus brought […]