Author Saurav Dutt has done an amazing thing. Back in the day there was a genre of literature that became known as Splatterpunk — it was a no holds barred, massively over the top sub genre of the horror world and it was amazing. Led mainly by the writing duo of John Skipp and Craig Spector it was a sight to behold and I had never read anything like it — till I picked up Saurav Dutt’s Cannibal Metropolis. 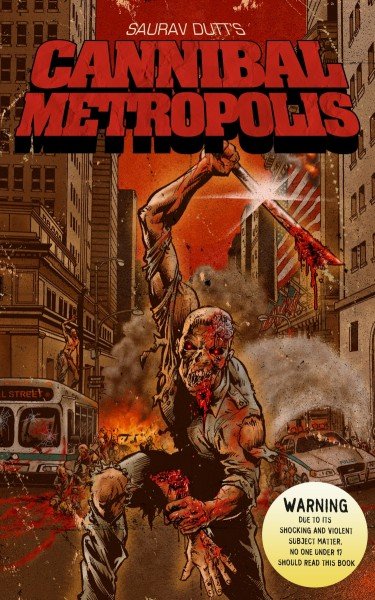 It happens sometimes that I come across a movie or a book of which I want to make you all aware yet I really don’t want to tell you too much about it as it truly is something that you must experience in the moment. Cannibal Metropolis is one of those projects. To go into what makes it so damn amazing would be to give away the very reason you must read it.

I guess what I’m trying to tell you is that I’m going to be purposely vague on story details as the cinematic nature of the descriptions of the mayhem and bloodletting are so graphic and so disturbing that it would be ashamed for me to ruin the fun for you.

What I am willing to tell you is this — Cannibal Metropolis is some of the most fun I’ve had with a story in quite some time. I mentioned the good old Splatterpunk days in my opening and that is exactly how this story left me feeling — just like the first time I read The Light At The End — disgusted and disturbed and completely mesmerized.

Dutt dedicates the novel to Ruggero Deddato and Umbreto Lenzi and it is very apparent that he is much more than a mere fan of their work. Cannibal Metropolis is a messed up mind fuck of a love letter to the cannibal genre and Dutt stands there — a pen in one hand and a bloody machete in the other — practically daring you to flip the page and see what horrors next await you.

It’s that sick, sadistic glee that makes Cannibal Metropolis so much damn fun to read. It’s one of those “oh, it surely won’t go there” books and when it does you smile and know that nothing is sacred and you strap yourself in for one hell of a ride.

Coming in at 256 pages — the novel is a quick read as the action starts immediately and literally does not let up till the very last word. Pacing is not an issue here as Dutt puts the foot on the accelerator on page one and forgets there is a brake.

For all this action and bloodshed Dutt doesn’t forget the importance of character development — what good is a fantastic description of a disemboweling if you don’t love or hate the person being tore to shreds, right? Dutt is an exceptional writer who crafts his characters with the same deft hand in which he creates moments of horrible vileness. What the hell more can you ask of a writer?

If you can’t tell — I loved Cannibal Metropolis — I loved it for its non apologetic vision of a city gone mad — I loved it for the no hold bars gore but mainly, I loved it because it is a well written genre novel that isn’t afraid to be horrific.

Cannibal Metropolis is available in a variety of formats — Click Here and go pick up the one that best suits your needs.

Wes Craven’s Last House on the Left has certainly earned its notorious reputation over the years.   Hard to believe it’s been over 45 years since Last House shocked moviegoers. […]

Mega-City One: The World of Judge Dredd is Coming to Television

Judge Dredd fans, are you ready for more?  It looks like the world of Judge Dredd is slated be made into a new television series,  Judge Dredd: Mega-City One. Indie […]