In recent years, an interesting variation on the found footage horror film has been the use of video chat footage. Writer/director Matthew Solomon, along with his co-writers Joshua Carl Allen and Jeremy Fox, take this fresh variation and add even more interest to it by wrapping it in a traditionally shot framing story in their film Chatter. In the framing story, a defense surveillance contractor becomes obsessed with recordings of the video chats of a couple, and he begins to notice unusual, and potentially supernatural, goings-on in the couple’s homes. This video chat found footage makes up the bulk of the film. Unfortunately, the framing device adds very little to the overall story. Even at just 76 minutes in length, the film still feels a bit too padded. Still, the chemistry between the couple,  Sarena Khan and Brady Smith, makes one care for what happens to these characters and carries the film.

After a brief and somewhat unrelated prelude, Chatter opens with a traditional footage framing story. We are introduced to low-level defense department/NSA contractor Martin Takagi (Tohoru Masamune, who was recently seen as Shredder in Michael Bay’s Teenage Mutant Ninja Turtles). In the course of his job reviewing recordings of intercepted video chat footage, he becomes obsessed with viewing the video chats of a young couple, Laura (Sarena Khan) and David (Brady Smith) Cole. Laura and David’s story is the central part of the film and is told through these recordings, as well as recordings of their chats with friends and coworkers. The couple is in the midst of move from London to Los Angeles. Laura is still in London, finishing up her job there, while David has moved to their new house in Los Angeles ahead of her to unpack and to be closer to his work as a composer of film scores. David starts experiencing unusual doings in the house and the couple’s relationship starts to show some strain. The supernatural occurrences increase and even begin the affect those on the other end of the line.  Back in the framing story, Martin’s obsession with the Cole’s story starts to take a toll on him and he faces possible repercussions from his higher-ups. 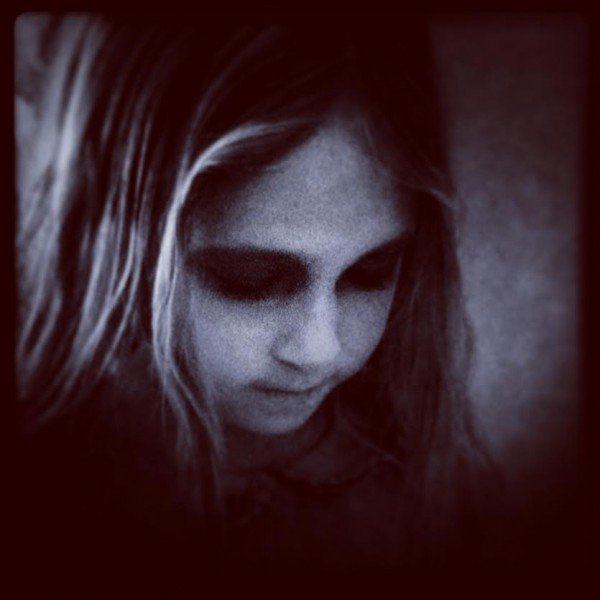 With a film built around the relationship of two characters, it is important that the audience believes in and cares about that relationship. In Chatter, the two leads, Sarena Khan and Brady Smith, have quite good chemistry, really making the viewer feel that they are watching a real couple that truly cares for each other. This is not to say that the acting is always impeccable. It can be a bit uneven at times, but they have a definite chemistry that comes through in spite of the rough patches. This is especially noted since at no time are they even in the same room throughout the film.

Often in found footage films, the viewer is left wondering why the characters would keep recording throughout the events. In video chat found footage, this is manifested by the characters leaving their cameras on when they would not normally do so, such as when they are away from their computers. At first, this seems to be the case in Chatter, with Laura and David leaving their chat up, even as they sleep. As the film progresses, David and Laura’s conversations with each other and with the few secondary characters reveal enough of their backstory to help explain this and other behaviors. Clues to their motivations are provided without feeling like a visit from “Mr. Exposition”. Instead, the filmmakers provide just enough information for the viewer to fill in the couple’s history without having to explicitly state it. 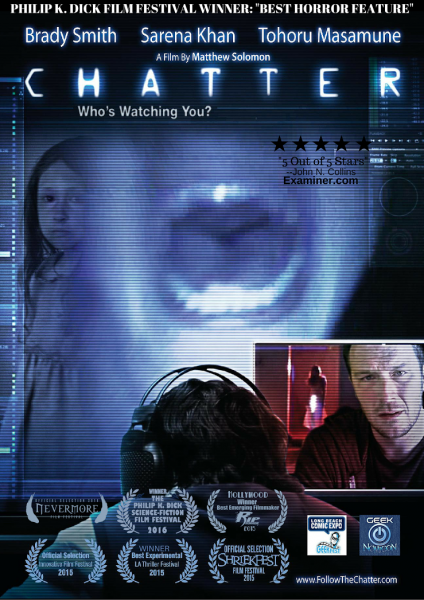 The main issue with Chatter is one of not quite enough content. While it is only 76 minutes long, fairly short for a feature, it still feels padded. There is a prelude starring Richard Hatch (Battlestar Galactica) as a ghost hunting father video chatting with his daughter, played by Alison Haislip (G4’s Attack of the Show!). While the prelude would make an nice little mico-short, it has no bearing on the rest of the story whatsoever. The framing device with Tohoru Masamune does show some promise to provide interest, but it too ends up going essentially nowhere. There are hints that he may have come across a larger government conspiracy, shades of the X-Files, but ultimately that thread is abandoned. Masamune  does an excellent job, but he is just not given much to do of consequence. One can remove all of the framing story, leaving just the video chat sessions, and one would still have a complete and cohesive film, albeit more of an extended short than a feature. This may stem from that fact that Chatter is an already expanded version of Matthew Solomon’s 2011 short Anna.

Chatter tries to bring something new to found footage horror by combining found chat footage with a traditional footage framing device. Unfortunately, the framing story is not completely successful and feels a bit too much like padding. Where Chatter excels is in the chemistry between the two leads. Horror is most effective when the audience cares about the fates of the characters. Sarena Kahn and Brady Smith bring the Coles to life and make the viewer really care for this couple, thereby making the horror all the more powerful. While Chatter is not a perfect film, the chemistry of the two leads makes it worth watching if you come across it.

When I first got wind of Turbo  Kid, I wasn’t all too impressed. After reading a synopsis of it, I was pretty sure that it was going to be something for the kiddies. I had no interest whatsoever in watching what sounded like a Power Ranger/Kamen Rider clone. I even turned down an offer to […]

What do you look for in a zombie movie? Is it sophomoric political satire, a script riddled with silly self-referential jokes? An all-star cast who sleepwalks through the film, most of them in glorified cameos that add up to little more than stunt casting? A story about the zombie apocalypse being caused by global warming […]

[Review] Countdown – Keeps You Guessing When It Will End

It must have sounded great in the pitch meeting: It’s about an app you download to your phone that tells you how long you have to live. For most people it’s good news — “I’m gonna live to be 98!” – but one girl finds out she’s going to die in 2 days and so […]