Blood Punch earned the #3 spot on my list of the top 10 horror films for 2015. It circulated through festivals for over a year and won several festival awards, including best film, best director, and best cinematography. Even so, it’s a tough film for me to review. Part of me wants to expound in great detail on the intricacies of the plot, but that would ruin it for you. As I’ve explained before, I love movies that have a WTF element about them, whether it be a plot development, the story itself, a specific memorable scene, or unusual visuals. With Blood Punch, I had that WTF look on my face from beginning to end. My problem is, how can I adequately get across to you the exponential, WTF nature of this film without giving anything away? I’m not sure I can, but I’ll give it my best shot. Regardless, from this point on, caveat lector.

The film opens with its protagonist, Milton, waking up on a couch to the sound of wind chimes. He looks around, seems disoriented, and then runs to the bathroom to vomit. While there, he sees a note, taped to a computer tablet in the bathtub, imploring him to “PLAY ME NOW.” He does as directed and as the picture takes focus, he learns it is a video of him leaving a message to himself. His video-self explains that they don’t have time for elaborate explanations to  motivate him to take prompt action. So Milton watches as his video doppelganger proceeds to lay his hand across the bathtub rim and chop off two of his fingers with a meat cleaver. A shocked Milton staggers back, and once he verifies that he still has all of his fingers, looks back to the video to listen to the message he has left himself. Now that he has his own attention, his video version begins to explain, “Looking back on it now, you could see where this was headed. You could see all the warning signs. But, you have to understand that at the time, you couldn’t see any of it. Because at the time, all we could see, was what we wanted to see.” 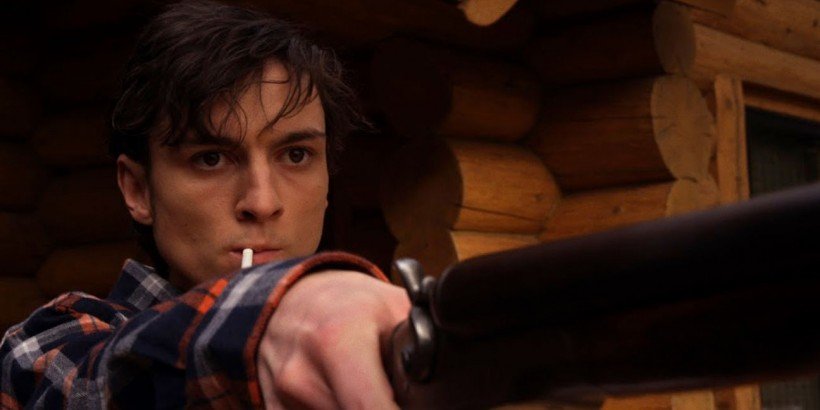 The scene then flashes back to the day before when Milton is in a treatment facility for meth addiction. In group therapy, Skyler, a new patient, informs the group that she is looking for someone to cook a large quantity of methamphetamine in a very short period of time for a once-in-a-lifetime score. As it turns out, Milton was a chemistry major in college and just missed graduation when his on-campus meth lab was busted. Once assured of Milton’s cooking skills, Skyler explains to him that her boyfriend, Russell, is the one with the contacts and the pharmaceutical-grade drugs needed to cook the meth, and Russell is on the way to break them out of the rehabilitation center. And, by the way, he’s pure 100% psychopath. After Milton and Skyler escape with Russell’s help, the three head to a remote hunting lodge, presumably to cook meth.

This all takes place in the first 15 minutes of Blood Punch. I can’t go any further without risking any reveals, but trust me when I say, the storyline is one unexpected twist after another. Even if you figure out the underlying foundation that dictates the structure of the plot, the convoluted implications will keep you guessing. 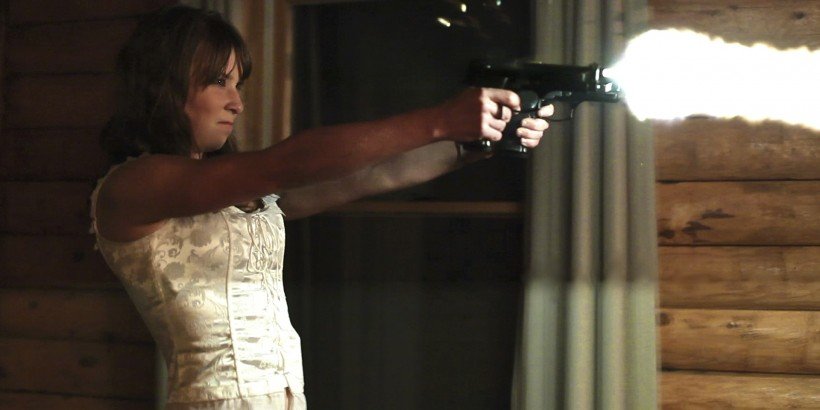 Milo Cawthorne, who by now you should recognize as Brodie from 2015’s Deathgasm, does an excellent job portraying Milton, who is a science nerd with experience in the drug business. He has enough self-discipline, business acumen, and street smarts to walk away from an enticing, but dangerous drug deal. On the other hand, he is inexperienced or naÃ¯ve enough that when it comes to relationships, he is not able to walk away from the equally enticing and perhaps more dangerous possibility of a relationship with Skyler. Ari Boyland plays the story’s seeming antagonist, Russell. Boyland’s performance is a pitch perfect, crazy-eyed psychopath, characterized by dangerous unpredictability. Skyler, as masterfully played by Olivia Tennet, is a secretive, sultry, and seductive Machiavellian manipulator. Tennet’s interactions with the other actors reveal nothing about Skyler’s intentions while at the same time, giving the impression that the gears are turning behind her nearly opaque faÃ§ade as she moves towards her endgame.

Besides the three main leads, there are two other key characters, Archer and Nabiki. Archer, the drug dealer to whom they will sell the meth, is played by Cohen Holloway who also played one of the werewolves in What We Do in the Shadows (2014). Archer is an immoral, whacked-out drug dealer who is as impulsive and volatile as he is crazy, and Holloway makes me believe it. Nabiki, Archer’s right-hand woman, is played by Adelaide Kane, who also appeared as Zoey Sandin in The Purge (2013). 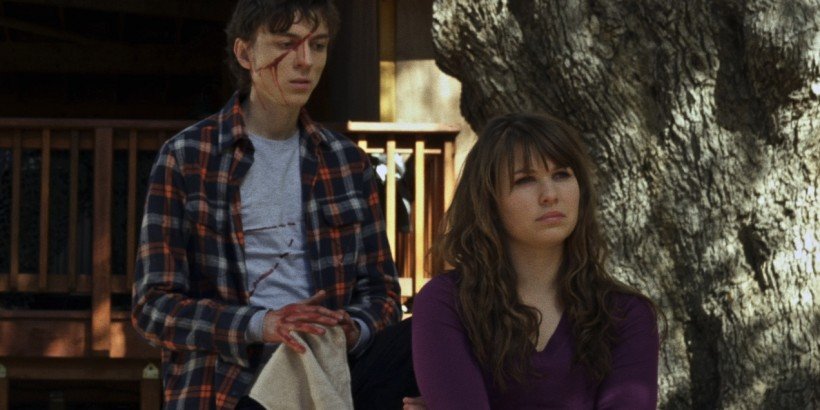 When I look at the credits of the cast and crew, I am even more impressed by the film resulting from their efforts. Blood Punch  is directed by Madellaine Paxson in her directing debut. Previous to Blood Punch, most of her experience is in writing children’s animated television, for example, Lilo & Stitch. The screenplay is written by Eddie Guzelian, whose credits are also predominantly children’s stories for the Disney and Nickelodeon studios. Adam Berry provides the music and his previous experience is, you guessed it, animated children’s television fortified by stints with The Sarah Silverman Program and South Park. Cinematography is by Neil Cervin, whose credits are dominated by a long list of TV movies. The editor is Sean Stack, who has four prior credits as editor, two of which are children’s animations. 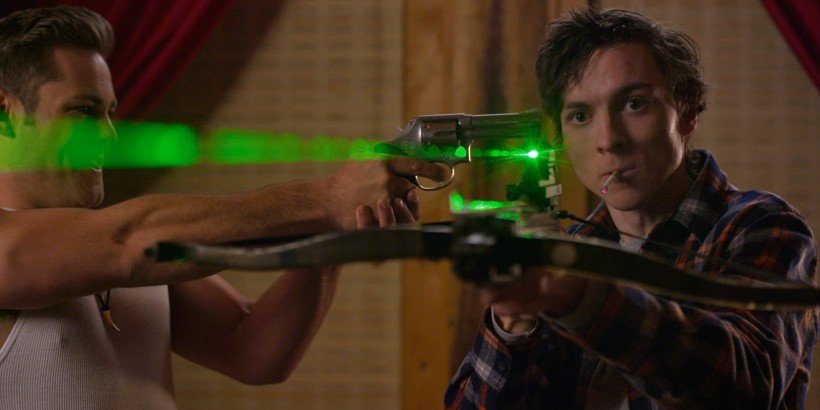 If you dig a little deeper, you’ll discover that there are multiple intersections between cast and crew. Paxson, Guzelian, Cervin, Cawthorne, Tenet, Boyland, and Kane all worked on the Power Rangers RPM  (2009) TV series. In fact, Guzelian wrote the script for Blood Punch with the three leads in mind. In addition,  the five main actors are from New Zealand, and Tenet and Cawthorne are married in real life. All this helps explain the obvious chemistry between the actors.

Blood Punch is the kind of film I go nuts over – all around good film-making applied to a premise capable of producing twist upon twist with a multitude of possibilities. Many of us seek out films with surprise twists within their stories and we’ve seen many films that pitch their unexpected endings when in fact, we’ve seen the twist coming a mile away. Let’s face it, after years of seeking out these types of films, it gets harder and harder to be surprised. But, believe me when I say, I never knew exactly what was coming next in Blood Punch.

I give Blood Punch 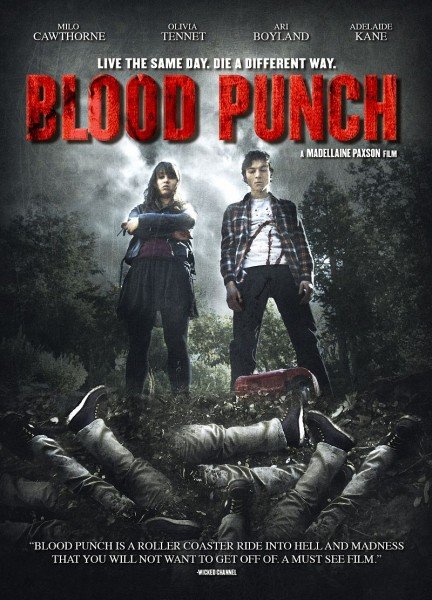 Goosebumps  may be a property long past its heyday, but now it has reappeared  thanks to the recurring trend of the time: 1990s nostalgia! In a post  Jurassic World… world, we can expect to see plenty of 90s properties get their revitalized reboots, remakes and delayed sequels to attract a modern  audience. After all, the […]

I am a fan of do-it-yourself  film projects. Even the greats must start somewhere and many start  with low budget, humble beginnings. So when I get to see a film that is obviously a labor of love and a DIY  project, I am interested. I also understand that such projects can come with warts, some […]

One of the great things about film festivals is the opportunity to discover a new film that catches you completely by surprise. Dry Blood from Kelton Jones and Clint Carney is just that film. The film is a disturbing nightmarish exploration into addiction, paranoia and horror. The cast, direction and script, along with top notch […]