It only seems appropriate that this week’s  Ash vs the Evil Dead  aired the same weekend as the release of  Star Wars The Force Awakens. As I’ve mentioned on Horror News Radio, modern Hollywood’s newest recurring trend is (as ScreenCrush’s Matt Singer dubs it) “The Legacyquel“, in which an older property is essentially rebooted with the help of older cast members passing the torch to a new generation while joining them for the ride. Often, this’ll involve said older cast members dealing with their past, from Rocky Balboa facing his mortality in  Creed to Han Solo returning to his more heroic ways in  The Force Awakens. With “Ashes to Ashes,” Ash finds himself facing the fact that everyone close to him is doomed to die and that his journey in life will be forever plagued by Deadites. This is  intriguing character focused material, particularly for an episode that takes us back to the location that started it all. It’s a shame that character stuff couldn’t seep into the newer characters for this week or, in the case of one particular character, for the entire season. But we’ll get there was we go.

Following the events of “Fire in the Hole,” Ash has arrived at the cabin in the woods from the first two films. He surveys the land, noting the death and decay that surrounds the place as it always does. Props truly should go to the production designers on  Ash vs. the Evil Dead  on this one, recreating the quiet atmosphere and taunting shocks the location gave us in the film trilogy. Right from the moment one hears the ominous banging of the swinging  chair on the front porch, the feel of that cabin is set firmly in place. It’s something Ash notices as he arrives, delicately approaching the place his normal life went off course. Shortly after arriving, Amanda Fisher arrives on the porch, revealing that she, Kelly and Pablo split up to look for Ash  after he ditched them at the end of the previous episode. After detailing the events of his ex’s decapitation that happened at the cabin, Ash decides to check the work shed for supplies while Amanda keeps guard of the book, unaware that Ash’s maggot infested hand is in the crawl space and growing some  appendages. 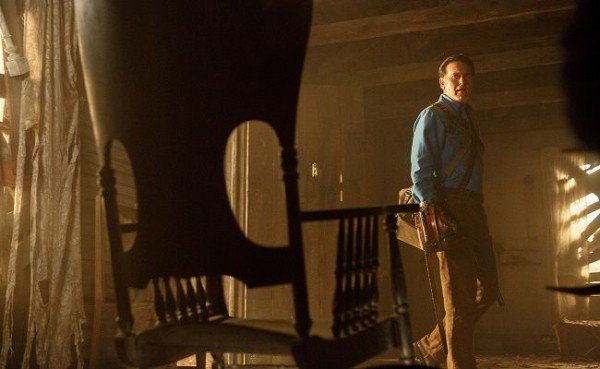 As these two deal with the cabin, Kelly and Pablo have a rather uneventful subplot in the woods. While searching for Ash, they come across a group of hikers. They lead the two towards the cabin, establishing themselves as uninteresting canon fodder for later. True, the original  Evil Dead  films did something similar, but they at the very least didn’t waste much time in getting to their eventual Deadite possessions, unlike here where things are drawn out despite the inevitability of what’s to come. It shows the limitations of  Ash vs the Evil Dead  in a serialized format for  its victims, something Lem slightly suffered from with the last two episodes; the moment we saw him get any sort of dialogue or even a name, we knew he’d be toast, much like our clearly Kiwi-accented campers. At the very least, we get a few fun character moments from Pablo and Kelly, who continue to show themselves as solid modern companions for Ash, especially since we’ve seen that the three of them have had a genuine relationship of sorts that’s developed with Ash… unlike others.

Back at the cabin, Ash returns to the work shed where the skull of his former lover Linda still sits in a vice, trying to find any sort of weapon to help him and Amanda fight off Deadites. Suddenly, Ash hears a familiar voice… that of Linda from  Evil Dead 2.  The now living severed head of Linda proceeds to taunt Ash, reminding him of his promise to take her to Jacksonville for a new life and that everyone who matters to him dies at the hands of the Deadites. It’s nice to see Linda  return (albeit from yet another actress who’s the spitting image of Denise Bixler), showing her vindictive Deadite “charms” are still as conniving as ever. Plus, we get a bit more vulnerability from Bruce Campbell  here as Ash, melting that badass bravado for a true character moment of regret and worry that wraps him up in insecurity over the life he’s lead and those he has lost. One could only hope that his worry and eventual smashing of Linda’s head was motivated by someone new in his life we’ve seen some actual relationship building with on Ash vs the Evil Dead, like a Pablo or a Kelly. But no… that’s not the case. 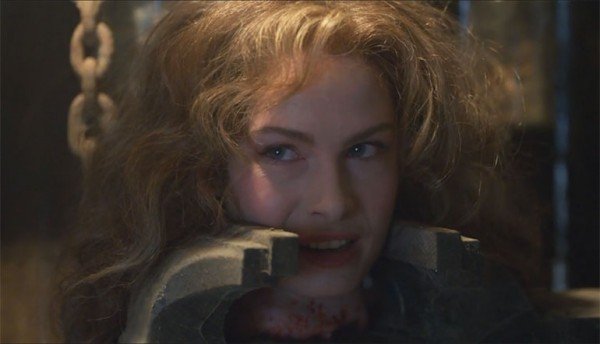 Alright, I’ve been passive aggressively mentioning this, but it’s time to finally go into what honestly makes this the weakest episode of  Ash vs the Evil Dead  so far: the unceremonious and completely unearned death of Amanda Fisher. Throughout this season, I’ve been worried that this show doesn’t know what to do with Fisher, who in “El Jefe” presented herself as a strong willed cop hoping to seek retribution for her partner. Then, after vaguely investing & being dragged around by Lucy “Mrs. Not Appearing In This Episode” Lawless, Amanda joins Ash & co. to be an extremely rushed love interest and eventually suffer at the trickery and hands of an Evil Ash in a similar fashion to her partner. So, all that time we spent seeing Amanda dragged around, heard her regret the loss of her partner and poorly developing her “chemistry” with Bruce Campbell ultimately meant nothing. Time that could have been spent giving Lucy Lawless more to do or  further developing the solid groundwork between the team of Ash, Pablo and Kelly was completely wasted on emphasizing Ash’s recurring tragedy with what is ultimately a lame example of the “Woman in the Fridge” trope. At least she got to kill the evil hand… though that still isn’t enough to make me feel something for her when she dies. Not at all.

Even in comparison to previous romantic partners for Ash, we got even less of Amanda as a character, with her turmoil and death only being used as a mere motivator for Ash instead of a character death that meant something more to an audience who could become attached to her. That maybe fine for a film context where the pace has to keep going for a 90 minute run time, but television needs to have more development involved that sadly isn’t here. It’s a shame that I’m bagging so much on this one element, but it’s crucial to the context of what this week’s  Ash vs the Evil Dead  wanted to get across. As Ash is fighting the evil version of himself grown from his evil hand, the emotion that’s supposed to come across is one rooted in regret for a lost love. Despite the comedy of pointing out each others’ weaknesses (“My trick knee!”), we’re meant to feel for our beloved character suffering a new loss from his development over this new chapter in his life. Yet, none of it is really there, making the fight feel far more hollow than the creators of the show probably intended, especially when Pablo or Kelly in a similar life threatening situation would have meant more. It’s a shame that the “Legacy” in this “Legacyequel” is being given a backseat.

Kill of the Night:  Ash crushing the revived head of Linda… since it actually meant something.

Best Ash Line: “Everyone dies here, it’s a rule. Death, taxes, more death, and I don’t pay taxes, so I all know is death!”

Next Week on Ash vs the Evil Dead:  “Bound in Flesh”, in which we may just finally get Ruby involved in the antics as the gang tries to destroy the Necronomicon.

One More Thing:  We see a brief flash of Cheryl from  The Evil Dead, but no actual mention of her amongst the many people Ash has lost in his life at the hands of Deadites. I know the rights issues with  Army of Darkness, but what’s the deal with the first film’s owners and Starz?

Welcome back, Grue-Believers. It’s been a few months since last we talked and what a better time to re-unite than Valentine’s Day! Can you smell the bouquets of flowers in […]

The Evil Dead  was never a film series deeply rooted in logic or reason. Sam Raimi always strove for more of a constant guttural burst of emotions, whether it be […]