The good Doctor gave me a choice of two films to review. I chose Crying Wolf for one reason and one reason only — Caroline Munro. Yes THAT Caroline Munro. THE Caroline Munro. From 1:26 to 4:49 at the beginning of the film, she is in place, acting and speaking lines. And then, poof, she’s gone! She’s never seen or heard again, even though she has top billing in IMDb and the film’s credits! It’s as if she is England’s version of Danny Trejo – granted a MUCH better looking version of Danny Trejo – but still there only to entice and tease her fans.

The word that best describes Crying Wolf is “ridiculous.” I’ll try to give you an idea of what I mean by that. The film begins with news reports of two savage killings in Deddington, a small English village described as a quiet, serene place in the middle of nowhere. A young woman has been torn to shreds by a wild animal and a reporter looking into the woman’s death has also suffered a violent end. We then cut to a private detective (Gary Martin) who is investigating the disappearance of the reporter who is a friend of his. He enters an antique shop in which Caroline Munro is the shopkeeper, and discovers what appears to be a large, ancient tome entitled Crying Wolf. The shopkeeper insists the book is not for sale and that it’s not the book for him. In the end, the detective wins the argument and leaves with the book under his arm. He heads straight for a pub where he begins to read the book while sipping a couple pints of ale. The rest of the film is narrated by the private detective as he reads the book, recounting the creation and destruction of a Deddington werewolf pack which begins with the death of the previously mentioned young woman. 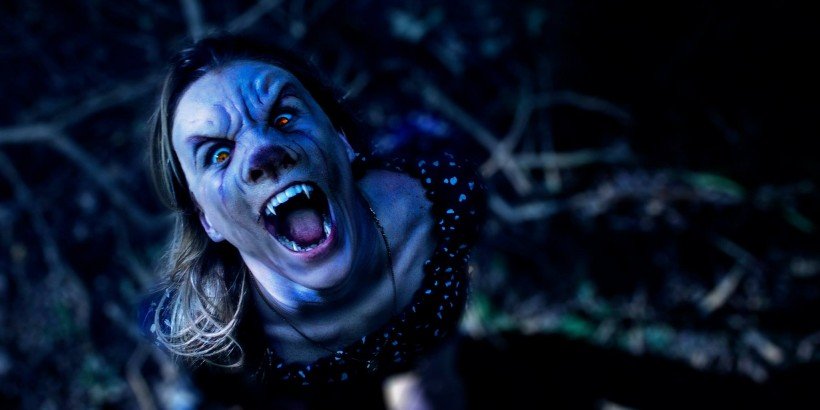 Early on, the “leader of the pack” hires two guys with a van to take the pack on a camping trip. Her goals are to solidify her leadership and to strengthen pack loyalty by experiencing a kill in the wild together. On the other hand, the two guys with a van, Charlie and Rickie (David Sellicks and Marco Radice), have a hidden agenda. Charlie is the cameraman for the missing reporter and he is out to avenge the reporter’s death. Rickie specializes in paranormal pest control and is enlisted by Charlie to help him eliminate the werewolf pack. Along the road, the werewolves pick up two hitchhikers who are skilled pickpockets. What does that have to do with anything, you might ask? Nothing, would be my answer. But it happens anyway. The plot wanders its way to a final battle, but not before making several pointless side trips through the use of unconnected stories as told by different characters.

Crying Wolf is directed and co-written by Tony Jopia with Andy Davie and Michael Dale as the additional co-writers. The film is intended to be a horror comedy, but I did not find it funny. Most of the jokes fall flat and center around double entendres referring to humans with terms usually associated with canines. A few examples of phrases used: bitch in heat; go back to your bitch before she jerks your leash; one werewolf has to stay home sick — he has distemper; when they pee, do they walk around in circles first; don’t bite off more than you can chew; she gets a little tense this time of the month, full moon and all that; and so on and so on. Actions are often punctuated with sound effects like a whip crack or a whooshing sound for the turn of a head, which gets old in a hurry. There was one funny bit where two hoods take another man into the forest to coerce his cooperation. This was the only funny scene for me and it really doesn’t belong in the movie. It was one of the pointless side trips the film takes through a story told by one of the characters. 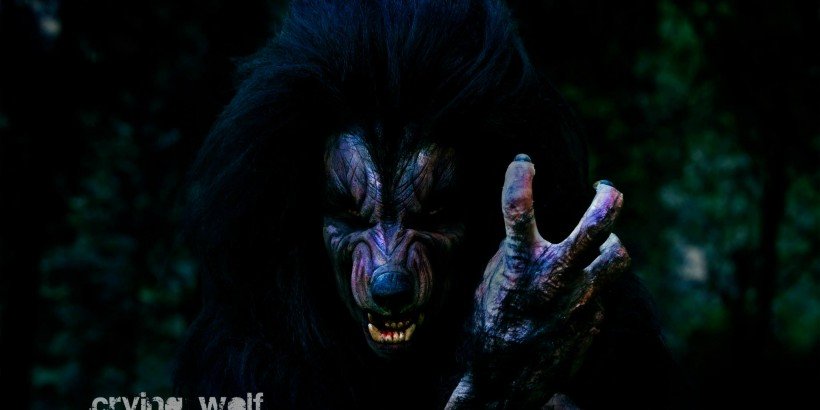 There are a lot of other problems with Crying Wolf. Rickie, in charge of paranormal pest control, is supposed to be an American. The tipoff is that he talks very loudly and shouts “Yee-hah!” I can imagine some funny stuff coming from an American stereotype, but all we really get is, he’s loud. On top of that, he uses British slang like “mate” and “suss.” Another gaping inconsistency is the time setting. The story has a relatively contemporary setting but is being read from this massive, ancient tome that looks centuries old. It was just … ridiculous.

And then there’s the special effects, practical and CGI. The werewolf costumes look like gorilla or bear suits with a wolf head mask with a Gene Simmons-like hair. The werewolf’s snout was minimally articulated and was fixed in a snarl with permanently curled lips. The CGI was literally cartoonish. Maybe all this is intentional, but to me, it’s ridiculous. 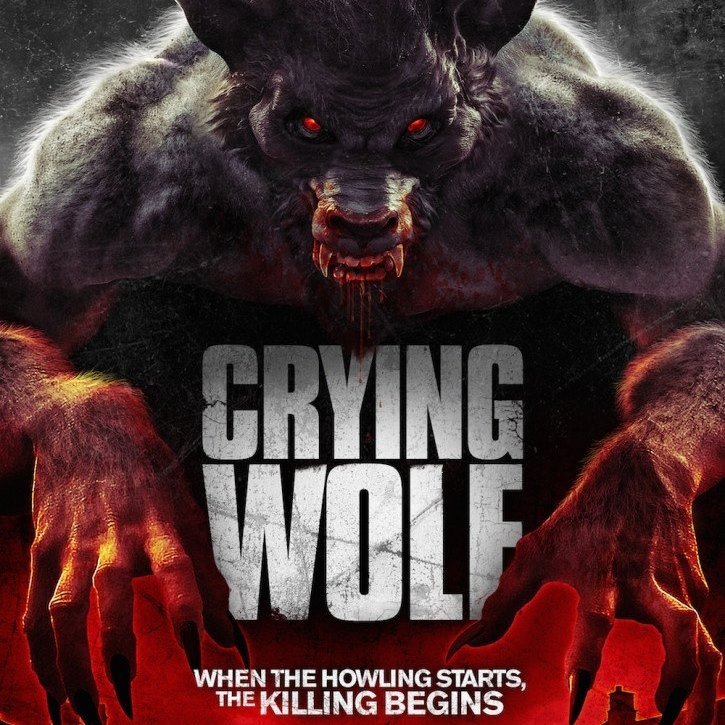 I tried to give Crying Wolf the benefit of the doubt and assume it was trying to fit into the “it’s so bad, it’s good” category, but no dice. Most films in that category are funny even though they’re not trying to be funny. This film is trying to be funny (I think) and isn’t.

Most likely, viewers like me are not the intended audience for Crying Wolf. So, if anything I’ve described seems interesting or funny to you, by all means, check it out. However, it fell ridiculously flat with me. I give it 1.5/5 only because I got to see 3 minutes and 23 seconds of Caroline Munro and it did make me smile in a couple places, which is something.

The Black Saint chimes in with his review of the sci-fi horror thriller Alien: Reign of Man (2017). The film is by writer/director Justin Price. The cast includes  Khu, Torrei Hart, and Deanna Grace Congo. And you can count on The Black Saint to not let anything slip by him – hold onto your hats, […]

Writer/director Finn Callan’s U.K. short film Guest is rich in spine-tingling atmosphere, from the bandaged appearance of its protagonist Mary (Melania Crisan) to the heavy sense of dread throughout to the decidedly creepy reason why Mary is in her current state.  Mary has entered, uninvited, the home of a woman (Jessica Munna) after being pursued […]

The Answer is a Sci Fi film that was both written and directed by Iqbal Ahmed.  The story follows a young man Bridd Cole played by Austin Herbert whose normal life as a mail clerk gets turned upside down when he shows up at home to find his place a wreck, his boss dead and […]

WRONG TURN (2021) Review – The Franchise Gets A Frightening New Foundation

On episode 429 of Horror News Radio: The Grue-Crew review… WRONG TURN (2021). Warning: possible spoilers after the initial impressions! Be sure to subscribe to the Gruesome Magazine YouTube channel to catch all the HNR episodes. And check out Patreon to see how to watch the recordings live! This is HORROR NEWS RADIO, the official […]

“Hello… Hello… I’ve got a message for you… and you’re not going to like it… Pray for death!” Yup. He’s right. His message was not likable. Join your faithful Grue-Crew – Crystal Cleveland, Chad Hunt, Bill Mulligan, and Jeff Mohr – as they try to keep it real amidst the world of quantum mechanics, John […]

It’s time to finally look back at the best films released during the worst year in recent memory. But, to be honest, while the world was generally on hold for most of 2020 and a majority of the theatrical releases were pushed back to 2021, streaming outlets were eager to step up the game and […]

Welcome to HEROES & DROIDS, your guide to pop culture movies and TV! This week we review… WANDAVISION (2021, Disney+)Episode 6 – “All-New Halloween Spooktacular!” On HEROES & DROIDS, we discuss pop culture about Superheroes, Sci-Fi, Disney, and Action. From Marvel to DC, from Star Wars to Star Trek, From James Bond to the Fast […]

Rumors and Predictions for THE MANDALORIAN SEASON 3, AHSOKA, KENOBI, GROGU, and more

The GrueCrew gather to discuss the future of THE MANDALORIAN and the extended STAR WARS Disney+ Universe. Not only do we speculate on what may happen with season 3 and with Grogu, we also discuss THE BOOK OF BOBA FETT, AHSOKA, OBI-WAN KENOBI, ANDOR, and more. Things look bright for the galaxy far far away […]

“You come to me with a hospital I can’t find and a doctor that nobody knows and a kidnapped girl who doesn’t exist. Go get Aladdin’s lamp and make your three wishes come true. Then we can talk.” Uhh, does that make sense to you? Join your faithful Grue Crew – Doc Rotten, Chad Hunt, […]

“Haven’t I convinced you of my sincerity yet? I’m genuinely dedicated to your destruction.” Yup. Got it. Join this episode’s Grue-Crew – Whitney Collazo, Chad Hunt, Daphne Monary-Ernsdorff, and Jeff Mohr – as they revisit a cast and crew that, by now, seem like old friends in Tales of Terror (1962). Decades of Horror: The […]

ANTEBELLUM (2020, HULU) Review – The Horrors of the Past Return to Terrorize the Present