Forward momentum is an elusive mistress for  Ash vs the Evil Dead. Just when I thought things were kicking back into higher gear with last week’s return to form episode, this week’s spends roughly 80% of its running time meandering with hit or miss character moments and re-expositing plot points we’re aware of. Then, the episode pulls a complete 180 by actually delivering on everything this season has been missing with two of its more under utilized cast members and some wonderful bits of gore. But we’re getting ahead of ourselves.

Our first pre-title bit involves the continued tracking of our heroes by Ruby and Amanda. The two arrive at Brujo’s former residence as the fire on the funeral pyre nears its end. As they look  confused at the remains of the Ghost Beaters’ actions, Amanda notices Ash’s trailer riding up the road. Before either can act upon this though, Ruby is attacked by the possessed burning corpse of Brujo. The skeletal Deadite is probably the closest we’re going to get to the chattering bone kickers of  Army of Darkness  on  Ash vs the Evil Dead, which is severely disappointing given that it’s brought to life via rather horrendous CGI that Lucy Lawless is barely able to convincingly fight off. At the very least, it gives us a few hints of Ruby’s past dealings with the Deadites before making her conveniently disappear into the fire, thus allowing Amanda to find where Ash is heading. 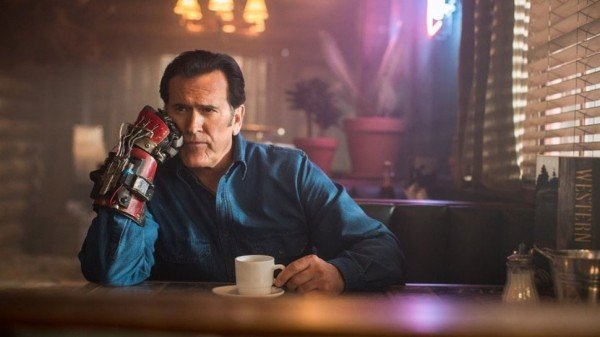 Speak of the devil, Ash is holding up with Pablo and Kelly at a diner getting their grub on. While woofing down pancakes, Ash explains his epiphany from his drug trip a few episodes  back, which revealed that he has to return to the cabin that started it all in order to rid this world of all the Deadites. However, he insists that Pablo and Kelly can’t endanger their lives further by following him on this mission, which neither are happy with. Kelly in particular disagrees with this idea, emphasizing that he won’t take away  her chance for revenge on the  death of her parents. Despite trending the familiar territory we’d already seemed to have gotten past from last week’s “The Host”, we finally get a true sense of Kelly’s potential as a character during this breakfast with Ash; a woman fighting Deadites for vengeance more so than survival. She’s got a clear death wish and  it’d be nice to explore that further on  Ash vs the Evil Dead.

But before we can do that, we have to spend time with these cool characters doing more moronic things. There’s nothing wrong with these characters being a bit idiotic in theory. After all, part of the appeal of watching  Ash vs the Evil Dead  is watching Ash act like a blowhard idiot, something he clearly  does here when attempting to romance Nancy the  waitress as he fully admits to not being able to pay the roughly $22 bill,  offering sex in exchange. The shame here is that Bruce Campbell‘s dialogue just feels so familiar and honestly dull  for what he’s done before in the series, retreading old territory without much fun to it. The same goes for Pablo and Kelly in the trailer, attempting to mess with the necronomicon that they should be fully aware  isn’t worth opening again. They even proceed their attempt to open it by firmly reestablishing how bad such an idea would be. All of this honestly felt like filler to the big finale instead of genuine build up to it, even with the vague attempts at reestablishing Kelly’s motivational drive. It’s not that none of this is bad as much as it is disappointing for a show as creative and vibrant as  Ash vs the Evil Dead. 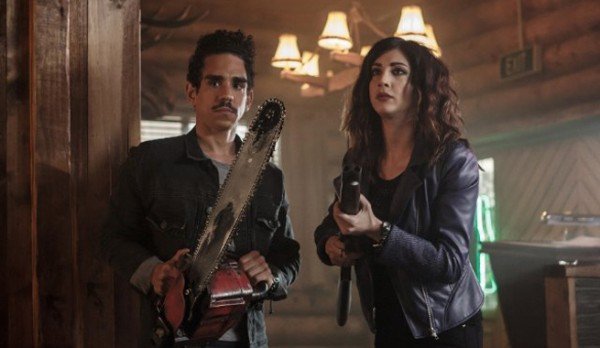 “The Killer of Killers”  FINALLY kicks into high gear at the 11th hour when Ash is accosted in the bathroom by Amanda, who is dead set on proving to Lieutenant Boyle that Ash has been behind all these suspicious murders. Lt. Boyle arrives just in time to be possessed by the omnipresent force that’s been following our heroes the entire episode. What follows is perhaps the most impressive gore Ash vs the Evil Dead  has had since “El Jefe”, including heads being impaled, a boy being thrown into an active fan and Boyle being finished by a meat cooking tools  to the cranium. Best of all, it finally involves Amanda and Kelly as major players, something this entire season has been sorely missing. Kelly in particular gets her chance to whack the hell out of Deadite Nancy, really allowing Dana DeLorenzo to sink her teeth into the part as she massacres a Deadite. Despite this episode’s early plodding nature, this ending gore climax makes up for many of its misgivings… though it’s not enough to honestly keep it as the weakest overall episode of the season as of yet.

All of this leads to our epilogue, where Amanda confirms her suspicions of Ash are all laid to rest and Ash invites her to follow them into battle against the Deadites, with an odd flash of her as a seductive angel of sorts. Not sure whether this will come back, but at the very least Amanda is finally a part of the main group. Hopefully she  becomes  be a bit more dimensional from here on in. Now, we’ll just have to wonder how Ruby will come back. In the meantime, we get a bit more with Peter Fenney as Lem, a character from Ash’s past we met at the bar that seems to be part of some militia. Lem, chased into the woods by the force from before, is terrified and calls his buddies with ammo for help, only to be consumed. I probably should have brought up Lem earlier, but there wasn’t much to say about him, given his previous scenes were mostly uneventful for plot and comedy’s sake which added to the overall episode’s flaw of padding. Hopefully, we won’t have to wait until the 11th hour for Ash vs. the Evil Dead  to make  him interesting, too.

Kill of the Night:  Nancy  by meat slicer & hammer bludgeoning to the head.

Best Ash Line:  “What? You’ve never seen a guy with a chainsaw for a hand before?”

Next Week on Ash vs the Evil Dead:  “Fire in the Hole” where Pablo decides on weaponry and the gang fights against Lem’s militia buddies.

One More Thing:  The crushed mints  and water method Ash uses for quick deodorant seems like it shouldn’t work… but could it?

Ash vs. the Evil Dead  Season 1 Episode 6 “The Killer of Killers:”

Ash vs Evil Dead  isn’t a show too based in narrative weight. After all, coming from the original  Evil Dead  series that always swung for the bizarre and brazen more […]

First off Grue-Believers, let me apologize for the long delay. Soon, very soon, you will all be able to call me Master. I am in the midst of my last […]